Now I don’t know a lot about Magic: The Gathering. Is there magic? Does it gather? I couldn’t tell you. But what I do know is mobile card games, and those of us privileged to play on this platform have a wide range of options to choose from.

We have massive regularly-updated card battlers like Hearthstone and Legends of Runeterra, both with different approaches to deck building and mana systems. We have roguelike deck builders and card crawlers like Slay the Spire and Meteorfall offering deep solo play. Going even further down the rabbit hole, we have monster-collecting games like Creatures of Aether channeling those classic card-collection vibes. It’s truly a rich tapestry, and card games are very much at home on mobile.

So when I heard that Magic: The Gathering Arena arrived on Android early access this month, I was curious to see how it would fare against the other card games this platform already has to offer. I stepped in blind and got down to playing.

The first observation that struck me is that Magic: The Gathering Arena – understandably – doesn’t have the same standard of production values as card battlers like Runeterra, Hearthstone, or Gwent. Admittedly, this version is only early access, and Wizards of the Coast has said that this isn’t the game’s “final form” in its FAQ post. But I just noticed that the boards, the cards, and their artwork don’t feel as polished as many other titles, though I’m sure the physical version of the card game is beautiful.

However, I do think that players who are used to Runeterra and Hearthstone will find that a little bit of an adjustment. If anything, it’s indicative of the high standard of card games that are available on mobile. Also I don’t really think production values are hugely important if a game is still distinctive, which is most often the case with popular roguelike deck builders. Truth be told, there are more important considerations, like how the game actually plays. 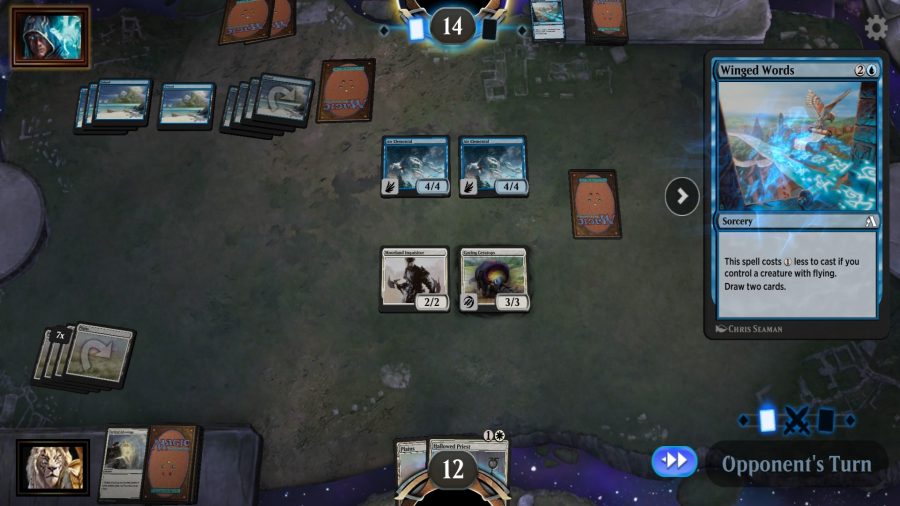 Magic: The Gathering Arena has some really smart ideas that definitely differentiate it from the other card battlers on mobile. As opposed to Runeterra’s mana bank and Hearthstone’s turn-by-turn increase, Arena sees you play ‘lands’ cards, which are effectively your mana pool count for each turn. Lands could be considered similar to a unit cap, as they each bear a certain symbol, allowing you to play cards of a particular kind – hence why different factions have different lands.

You also use lands to cast spells, but coolest of all, activate unit abilities. In Runeterra, there’s always a lot of pre-fight spell casting, as players try to gain an advantage in attacking or blocking. And while Arena still has spells that you cast instantly, you can also activate card abilities. The Moorland Inquisitor, for example, has a First Strike ability. If an opponent chooses to block, I can activate that ability (for a lands cost) and make sure he hits first. 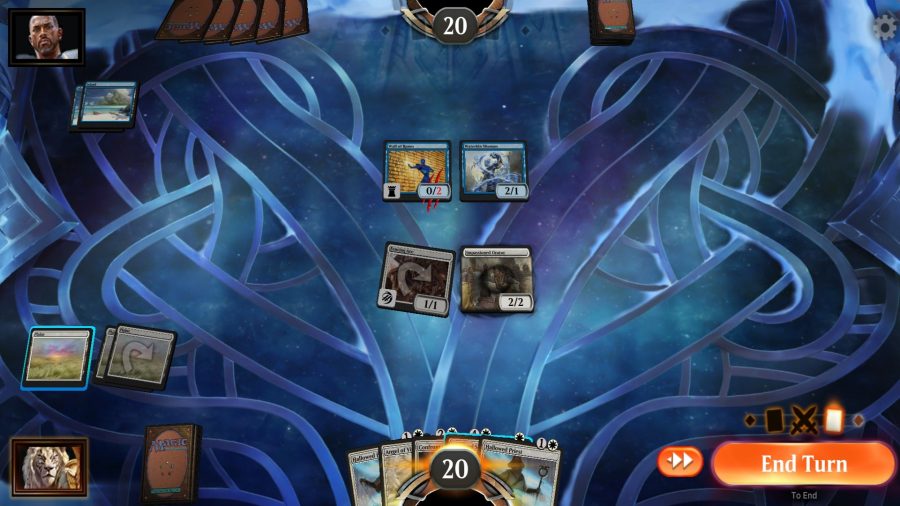 Combining these abilities and spells is how you create super-powerful synergies, and things can get out of hand pretty quick. Another difference to most other mobile card battlers is unit health. Unlike in Runeterra or Hearthstone, units recover their health after every fight, meaning that unit vs. unit battles are more frequent and blockers are far more effective. I really love this difference, as one of the things that sometimes bothers me about Runeterra is how a lot of battles come down to one all-in engagement. By comparison, Arena feels far more attritional.

Arena also utilises the idea of cards being ‘tapped’, which means you’ve used them that turn. If you summon a unit, the lands it cost will become tapped, meaning you can’t use them for spells during the attack or block phase, or to activate unit abilities. If units attack, they are also ‘tapped’, meaning they can’t block. In this sense, Arena is always a balancing act between what you use and what you keep back – between aggression and defence. 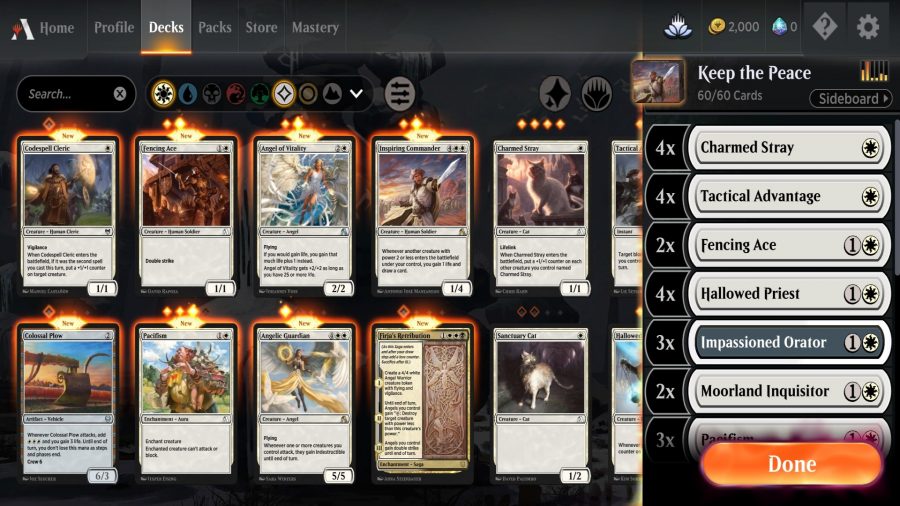 That idea took a lot of getting used to, and I’d frequently throw all my units forward just to realise I’d left myself wide open. As is fairly usual for card battlers, your goal is to destroy the enemy core with direct attacks, but one difference is that you can heal your core beyond its starting number. This really does make for some prolonged games, and on average I find my Arena battles last longer than any mobile card-battler I’ve played before. It’s just one of the ways that Arena is kind of overwhelming.

That’s not to say the game isn’t well tutorialised. It gives you those initial five battles, the same way Hearthstone does, and you have to complete a colour challenge, fighting different deck types before you can even play PvP. These colour challenges teach you the basic synergies between cards, whether it’s using units to heal your core or combining unit abilities and spells. But it quickly becomes clear just how expansive Magic: The Gathering really is. 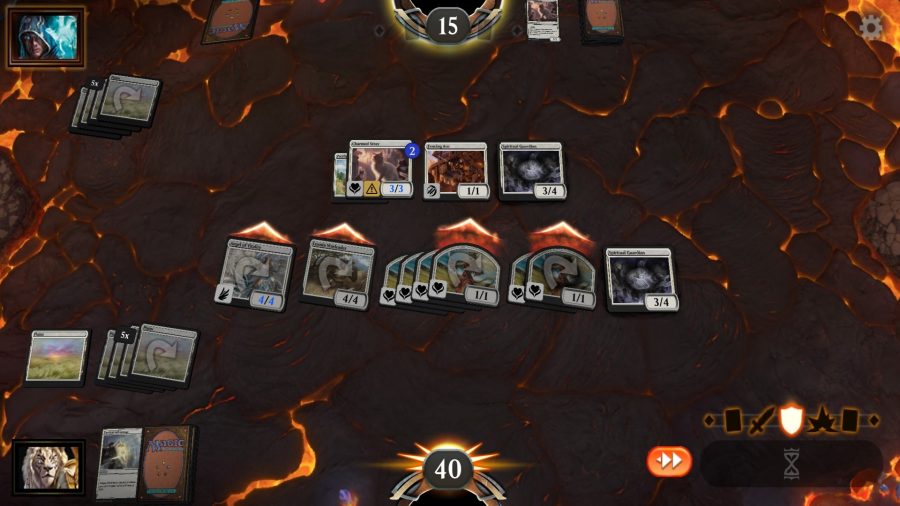 The sheer number of playable modes is definitely overwhelming for a beginner. You’ve got play, brawl, standard ranked, historic ranked, bot match, events like premier draft kaldheim, quick draft zendikar rising, and sealed kalheim. If that wasn’t enough, many of these feature different deck-building rules. I get that Magic: The Gathering Arena is for people who play Magic, but I feel like if this mobile version wants to attract new players, it could do a better job of explaining its different modes.

But it probably will! This is early access after all. Even then, it’s only for certain Android devices, so maybe I am being a touch pedantic. There are undoubtedly areas for improvement here, but there’s still a way to go before release, and what I’ve seen so far is exciting. While it doesn’t have the same super high production values as other big deck builders, it’s definitely a refreshing take that differentiates it from what’s already on the mobile platform – even if some of those ideas are actually older than Hearthstone or Runeterra. Still, it’s got a little way to go to beat mobile’s current biggest card battlers.