Magnum Quest’s charismatic heroes are split into six Factions: Fortress, Wild, Forest, Shadow, Divinity, and Abyss. Alongside this, each has their own special abilities and alliances, as well as their own motivations to fight. Choosing your roster takes more than just picking your favourites, as unexpected victories can come from creating unique mixes of allegiances.

From mysterious, blade-wielding weapons masters to Balrogs from the depths of the abyss, there are endless possibilities when it comes to building a powerful team. Some heroes work better with others, and you’ll want to ensure each member of the team contributes something different in order to guarantee victory. Some combinations reward teams with near-invincible characters, while others provide a relentless army of brute strength.

Here we introduce just some of Magnum Quest’s many key players from each Faction, along with their backstories and special abilities – all that’s left is to decide who makes the cut, it requires careful planning in order to perfect the ultimate team.

Now, let’s take a look at the heroes of Magnum Quest. 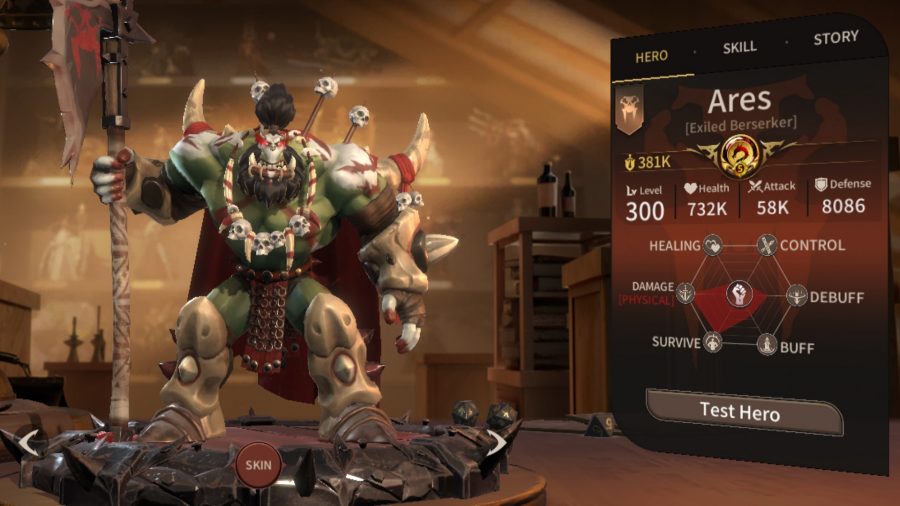 Ares is a powerful orc warrior who started a life for himself in the city of Trassvertian, and learned the blacksmithing trade after being banished from his tribe. His new life was soon shaken by news of an atrocity committed against his people, and Ares returned to the tribe that expelled him, only to find them slaughtered. Vowing to avenge his clan when the time is right, Ares has since been travelling with a new tribe and preparing to fight.

Ares is one of the most powerful characters in the game, a tank with extreme defence and attack capabilities. His Tornado Slash, which deals 175 per cent attack to all surrounding enemies, and his Sweep Attack which deals 140% damage with an added six second bonus, are arguably the most powerful examples. He is also able to evade death, using Endless Fury to cast Death Avoidance on himself. 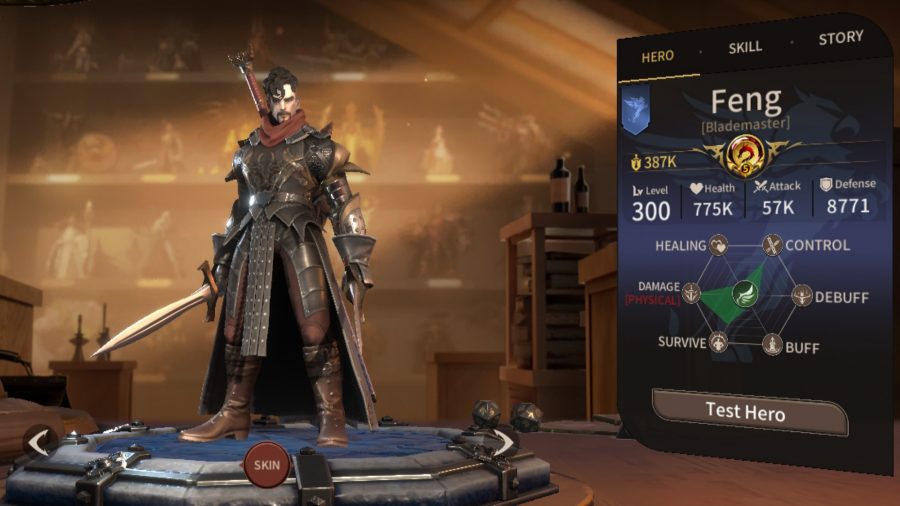 A mysterious weapons master from a far off land, Feng is on a quest to find a worthy opponent. Few can match his strength and weaponry skills, and he has already made his mark on the communities of the Armuda Continent by rescuing an imprisoned elf from a life of slavery. To do so, Feng defeated an undead enemy, an incredible feat for a non-magical being.

Feng is outstandingly strong and particularly useful during boss fights. He can deal 120% attack damage to all enemies in front of him using Tao Intensity, or attack with Tao Epiphany, targeting the enemy with the lowest health twice in a row, dealing 140 and 180% attack damage each time. If your team has no healer, Feng may be a useful addition, as he can withstand more than most. 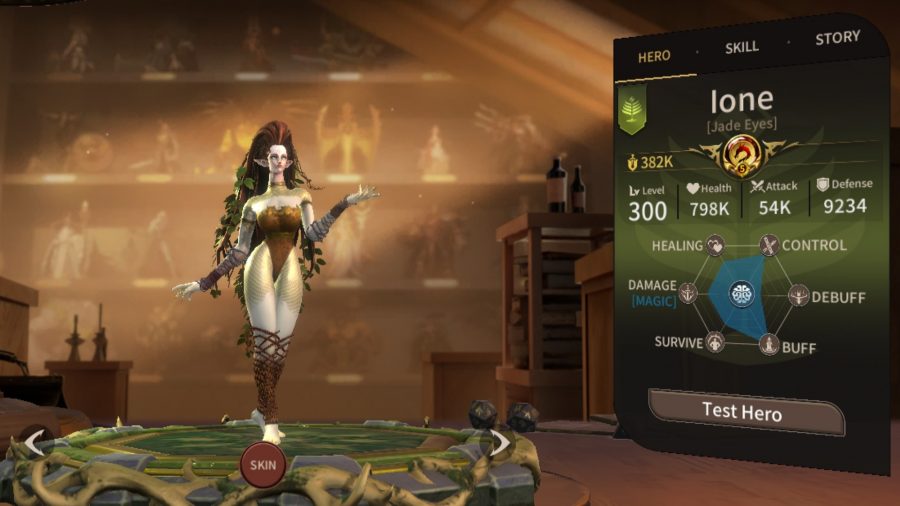 Ione’s increased interactions with the League of Moonlight alienated her from her kind, causing her to be exiled from her homeland entirely. The League recognised her talents and employed her as an expert in the ways of the forest, educating its members with her distinctive abilities. Ione’s strength lies in her ability to understand the natural world, meaning she can protect living things during battle.

Ione and Ares have a natural bond, allowing them to be stronger when used together in battle. Her Jungle’s Fury skill inflicts 60% attack damage to all enemies for six seconds, then leaves them Entangled, while her Jungle’s Shield skill allows her to protect the ally with the lowest health and reflect attacks back onto the enemy. She is also able to rescue heroes from the brink of death with Vines To The Rescue, which wraps the fallen ally in vines that slowly recover HP. 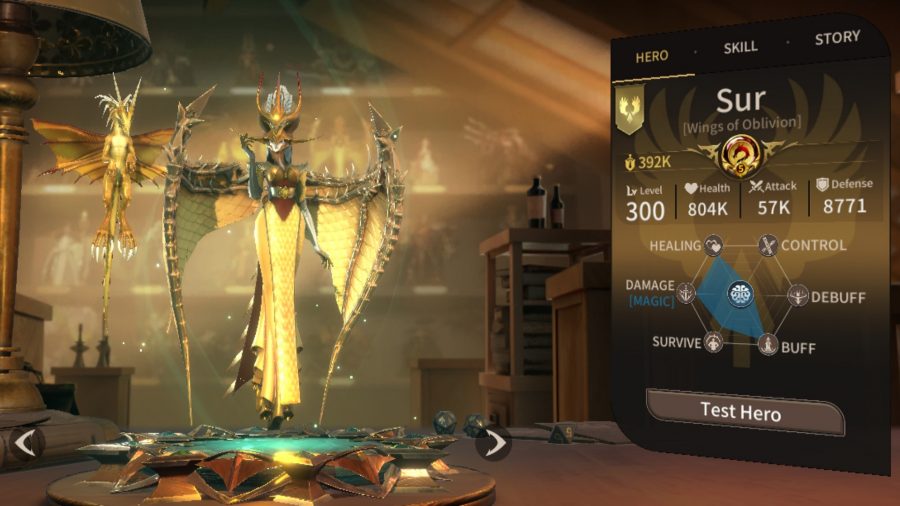 A divine being, half-dragon, half-human, Sur has lived through the most devastating wars of Armuda. Destined to live through many more, she has committed herself to neutrality – refusing to intervene despite her great power. Her bond with her brother Asgard brings her yet more strength, and they have learned to rely only on one another. Divinity heroes like herself are able to swiftly recover energy from other heroes in battle.

Sur’s skills are a mix of defence and attack, and include Dragon’s Awakening, which grants her immunity to all control spells, and Scorched Earth, which inflicts all enemies with Burn before the battle has even started. Her other skills enable her to buff her stats – increasing attack by 6% every five seconds with Reign Of The Past, and reducing incoming damage by 40% using Unyielding Wings. 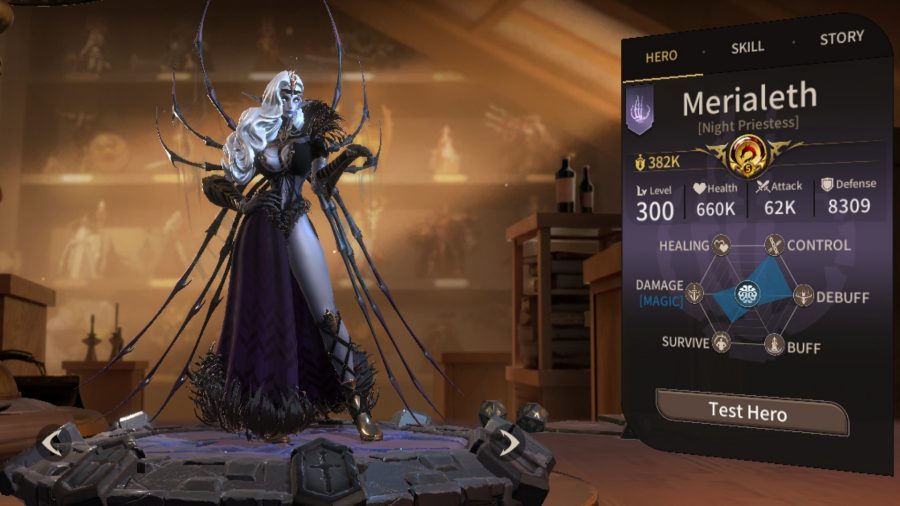 Born into an elven community but lacking any magical powers, Merialeth was abandoned at a young age and forced to fend for herself. Adopted and mentored by Betan, she slowly learned how to cast magic spells the traditional way. The two were eventually married, allowing her to have significant influence over the evil elves who had once rejected her. Her powerful connections and vast knowledge meant that she was appointed as priestess by the Goddess of Evil, and continues to grow her powers.

Merialeth must be utilised strategically, placed behind stronger heroes while her base health is low. She is able to control the minds of two random enemies for eight seconds and steal their HP using Predator Instinct, and can lay down Vicious Entrapment which deals 50% attack damage to enemies that cross its path. She can also use Puppet On Strings, a skill which casts Bewitch on the enemy with the highest Energy and forces it to attack its own team. 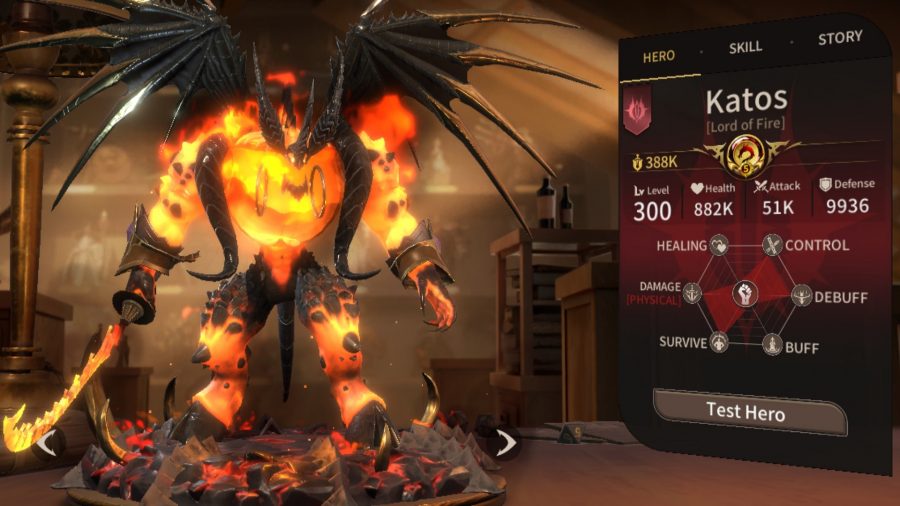 The intimidating Balrog Katos was summoned by the Depraved God from the depths and ordered to join the War of Conquest against Armuda. Trading his loyalty for the power of the Oracle Tablet, promised to him by the Depraved God, Katos fought ruthlessly until the Depraved God was defeated and sealed away. His contract immediately disintegrated, leaving him no choice but to return to the pit where he was born. He, and other Abyss Faction members, are notoriously difficult to collect, but bring with them near-unbeatable strength.

His skills include Roar Of Horror, which inflicts Burn and Silence upon enemies for six seconds, and Shield Of Fire, which creates a shield equal to 5000% of Katos’s total attack. He is also capable of dealing 100% attack damage coupled with Burn, which deals 75% attack damage per second for six seconds. Tragically, once defeated, he cannot be revived.

Which of these heroes will be joining your party? Gather them today in Magnum Quest, available right now on iOS and Android.