Nintendo has done it again. On the face of it, Mario Kart Live: Home Circuit, Nintendo’s latest foray into toys-meets-games territory, is a bit gimmicky. And, in many ways, it is. I certainly had to push aside a bit of grumpy cynicism when pulling the little plastic kart out of its box for the first time, but after mere minutes of just driving the kart around my home aimlessly, I was struck by how excited I’d have felt if I was a kid receiving this at Christmas.

I’m sure I can speak for most people when I declare that toys and games were my favourite pastime as a young’un, so I’ve never found it particularly difficult to understand why the likes of amiibo and Skylanders were so popular. Who wouldn’t want to mix your favourite hobbies together?

However, none of the previous efforts came close to that childhood glee I felt while speeding the surprisingly fast and responsive little plastic kart around my living room. To my mind, this is the first of the video games and toys collaborations to actually make the toy the central feature, rather than just an accessory.

So here’s how it works. You have a plastic kart, featuring Mario or Luigi, depending on the version you choose, four pre-assembled cardboard checkpoints, and your Nintendo Switch. After an extremely simple set up involving pointing the kart’s camera at a QR code on your Nintendo Switch, the game begins proper.

You’ll probably spend your first hour or so of the game simultaneously marveling at how clever Nintendo is while trying to push the boundaries of the kart itself. It moves surprisingly quickly, can turn around tight corners with ease, and isn’t so fragile that a scrape with a wall or cat will result in any real damage.

However, we did experience difficulties moving the kart over carpets or rugs. It moves, but any minor bumps can slow it, or grind it to a halt. The kart also can’t move very far from your Switch at all, and we experienced connection issues while it was a mere handful of metres away. It’s not really designed for huge courses throughout an enormous mansion, but it’s worth pointing out nonetheless. 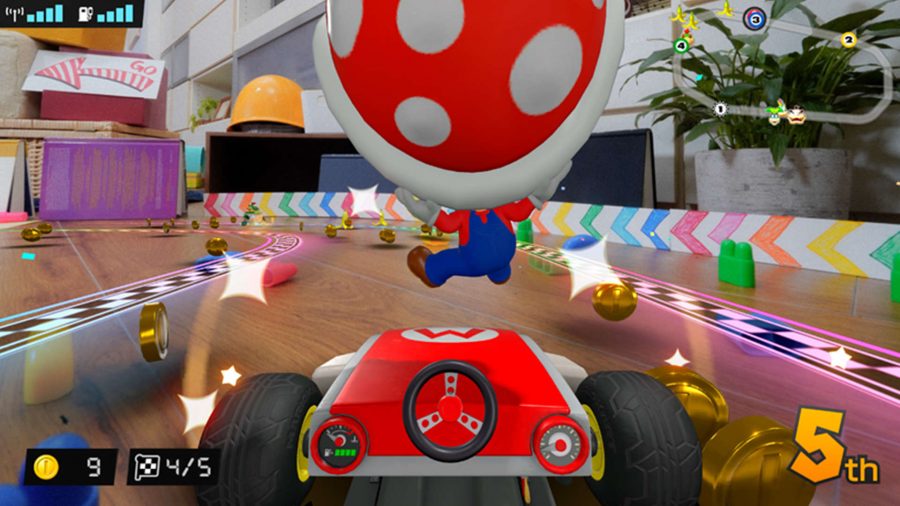 Once you’ve moved on from your sense of wonder at the basics, you’ll follow the basic instructions to set up your first course, which is delivered with classic Nintendo magic. Set up the pre-assembled checkpoints in specific locations around your home and drive up to the first one. At this point, Lakitu will drop paint on your wheels, allowing you to drive around your home painting the course. The camera is intelligent enough to read the numbers on the checkpoints, too, so the combination of both lead to your course.

At this point, it largely feels like real Mario Kart. You race against Koopalings in single player, or against up to three friends in multiplayer. You can use items (yes, mushrooms actually make your plastic kart go faster) and various other boosters around your track, including the classic drift boost ability.

The best part is, you really don’t need that much space to create a decent little circuit. Nintendo has clearly thought of everyone with Mario Kart Live, from those living in huge mansions to tiny flats, you can create a circuit that works. It’s just a shame that something as simple as a carpet or rug can undo your hard work. 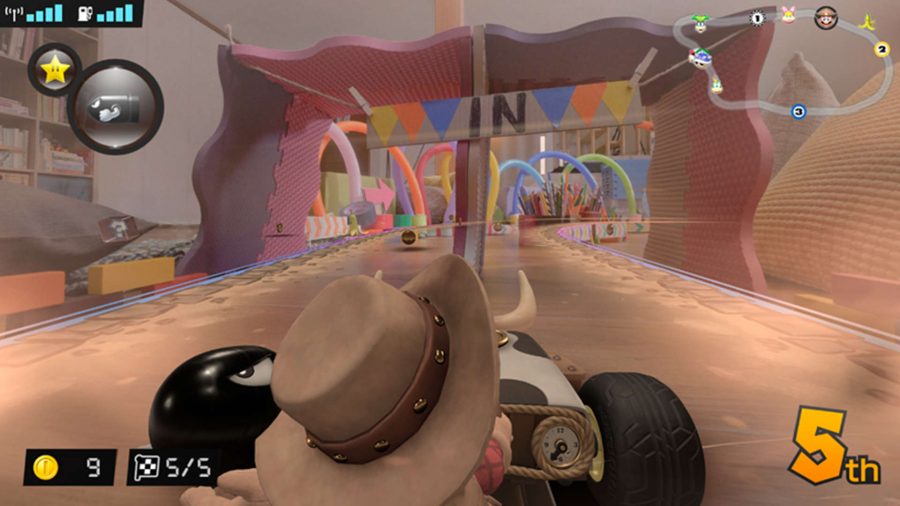 Despite our overall positivity towards Mario Kart Live: Home Circuit, it is worth mentioning that it is quite a limited affair. If you bought this for the racing alone, you’re really better off sticking with Mario Kart 8 Deluxe. Home Circuit’s longevity is tied to your creativity at creating courses, which is why I’d argue that this is far more aimed at children than an older audience (as if that wasn’t immediately obvious). Having said that, there are a bunch of cups to participate in, and you can unlock new outfits and accessories by picking up coins while racing, just like in real Mario Kart.

So, ultimately, we think Mario Kart Live: Home Circuit is a fantastic festive gift for a younger audience; particularly if you and your fellow parent friends can group up to get karts for your four kids. It’s a game that sparkles with creativity, and kids will easily lose hours to this while creating ever more outrageous courses.