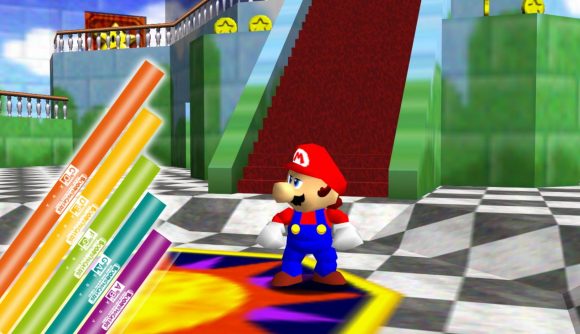 We all get bored every now and again, tap away at the desk, pretend we can drum, or imagine we are conducting a little orchestra. Right? Well, two talented people have taken that dream to the extreme, and produced the best performance of Mario music I’ve ever seen. Forget your big bands, forget your piano arrangements, I want all of my music in the form of variously lengthed pipes from now on.

Using a variety of plastic pipes of different lengths, known as boomwhackers, these two performers act frantically and with expert precision to pick and bang exactly the right pipes, performing a cracking rendition of Bom-Omb Battlefield from Super Mario 64. I like to think this is what Koji Kondo originally intended.

While I struggle to put together a chord on the piano with more than two fingers at once, this display of expert human intelligence and creativity is widely watchable, and also just looks like two mates having a lot of fun. The internet is bad for almost every other thing in the world, but occasionally it throws up a treat like this in your social media feed and maybe, just maybe, everything is going to be alright?

You can watch the video below on Twitter (where I found it), but do be sure to go to the TikTok account of the original creators called @andrewboersema.

this is one of the most impressive things i’ve ever seen, I can’t believe how far we have come as a species pic.twitter.com/hCQxFSinaK

If you love Mario and his many other pals equally talented at leaping, be sure to check out our bumper guide to the best Switch platformers for more great gaming goodness.