With the Switch now in its fifth year, we’ve already seen some of the standard Mario sports titles make the leap onto Nintendo’s most recent console. We’ve had tennis, we’ve had golf, and while they weren’t a bad time, they didn’t reinvent the formula, or really even perfect it. Now, finally, we nearly have Mario Strikers: Battle League, the one we’ve all been waiting for, and I’m happy to say, it doesn’t disappoint.

For a start, let’s be clear, Mario Strikers is developed by a different team to the tennis and golf offerings, so already we were expecting a different approach, and that’s what we gleefully received. If you were one of many disappointed by either of those titles, Strikers follows its own formula, as well as lending a couple of the better ideas from Mario Kart 8 Deluxe.

If you haven’t played a Mario Strikers game before, as you’ve probably gathered from reading this far, it is indeed a soccer-style game, but this is the sport in which the moustachioed plumber takes the most liberties. Fouls? Forget about them. Battle League is prison rules, or no rules for those unfamiliar with the term, so big tackles are key here, and so is avoiding the electric fence that borders the perimeter. That is, unless you think Toad’s tiny little legs might run a little faster when electrified, you’d be wrong by the way.

But before we get carried away, let’s talk about gameplay (that’s why you’re here after all). Battle League as a soccer sim lands in the nice place between Captain Tsubasa’s pure arcade football, where skill is of no real use, and FIFA’s rigid gameplay. Or, if you’re a Strikers veteran, it falls somewhere in between the chaos of Mario Strikers Charged, and the gimmick-light original Super Mario Strikers title. Essentially, Strikers is the sporting equivalent to Smash, in that you can pick up and play with relative ease. 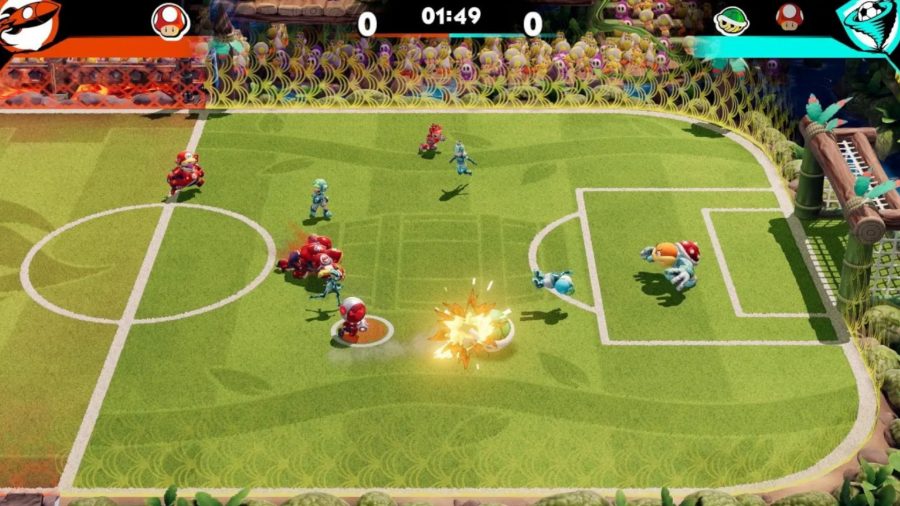 And if you play it, you’ll have a grand old time. Having mentioned gimmicks, Battle League again finds the sweet spot, with a small selection of classic items to mix up the gameplay – green shells, red shells, bananas, etc – alongside the hyper strike mechanic that allows you to unleash a super-powered shot on the opposing team. All of these fit almost perfectly into Next Level Games’ variation on the soccer formula, and add to the thrill of high-octane physical matches.

Battle League is a success, a shot aimed into the top corner and pulled off with serious aplomb

As something of a soccer man myself, more accustomed to FIFA than previous Strikers titles, I was pleased to see all the football fundamentals executed to a tee. Passing is particularly responsive, and I lost a small chunk of my preview time having too much fun working little passing triangles. Shots feel natural too, though it’s worth saying that the hyper strike is quite difficult to pull off in an online match, due to needing an uninterrupted power-up window to unleash. Fortunately, there’s enough player control here to rarely feel cheated.

For solo players, outside of online mode, the AI is more than intelligent enough to offer up a solid challenge – leading to an embarrassing moment following a well-timed tackle from a blue Yoshi live in the Nintendo offices – and unlike Smash, you can learn the tricks of the trade here well enough to carry your abilities online. The training levels are generous too, with all of the most important aspects covered in their own short tutorial. 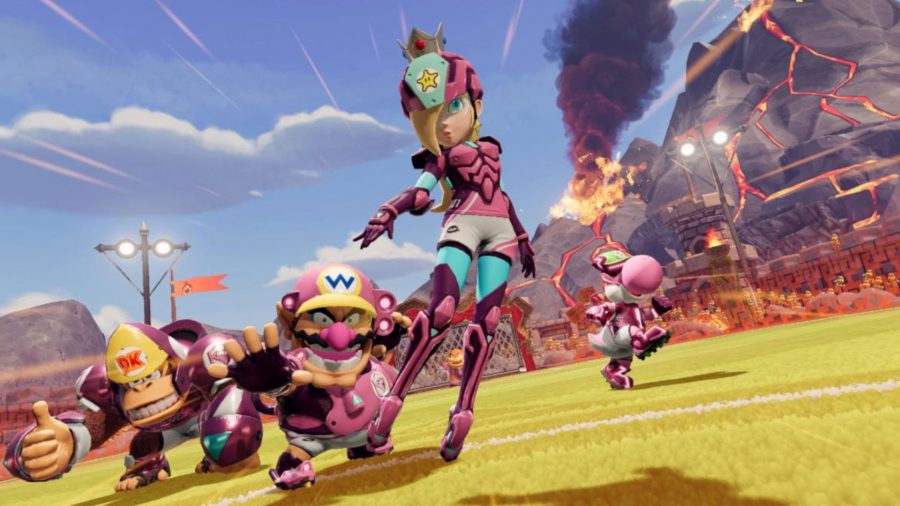 Battle League also makes the intelligent call not to try and shoe-horn in a strange plot to justify a story mode. There’s no story mode, and there doesn’t need to be, instead, Strikers takes notes from Mario Kart once again, offering a selection of trophy-winning cup battles that have different levels of difficulty, in the same way that Kart has a number of GP collections.

The cup battles are split into different categories, with certain types of teams to face in each round, such as strong teams in the Muscle Cup, quick teams in the Turbo Cup, and so on. These challenges all build-up to the Championship Cup challenge, where you play slightly more inventive teams, including in my experience, a team full of Toads (Sorry for the 7-0 drubbing, Toads). 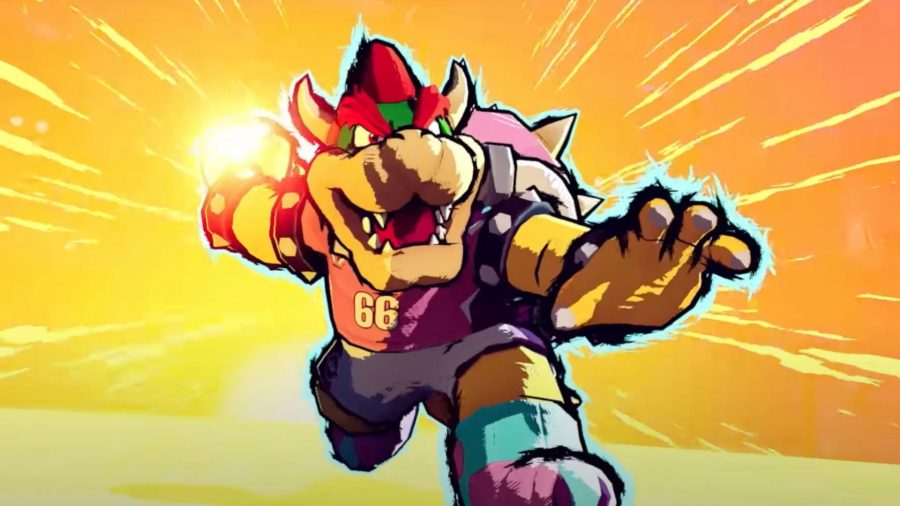 Multiplayer is a bit of a different beast, and while I can see the four-on-four mode laying claim to the title of next-big-Switch-online-hit, anything under the full four players on a co-op team can be a little confusing. Due to the fact that there’s no defined character per player, and you can easily accidentally pass to yourself when intending to pass to your teammate, it’s a little too easy to lose yourself to the pace of the match.

You’ll be glad to hear this relatively minor misgiving is made up for with one-on-one multiplayer, which really does encapture the sort of frantic fun found in Smash or Mario Kart (a.k.a. the online Mario titles with more than a six-month life cycle). With the ability to easily switch between players, or with the game doing it seamlessly between passes, there’s a real sense of flow that makes the short four-minute game time fly by in what feels like seconds.

The real draw though, if you can find three players to join you, is in the full four-on-four team battles. It’s here that I feel Battle League has the most to offer, carefully balancing chaos and control for a game experience that feels up to the challenge of taking on Rocket League as the most fun ball-in-the-goal title currently available on Switch, and with the added charm of classic Mushroom Kingdom characters, it’s hard to see it not winning. 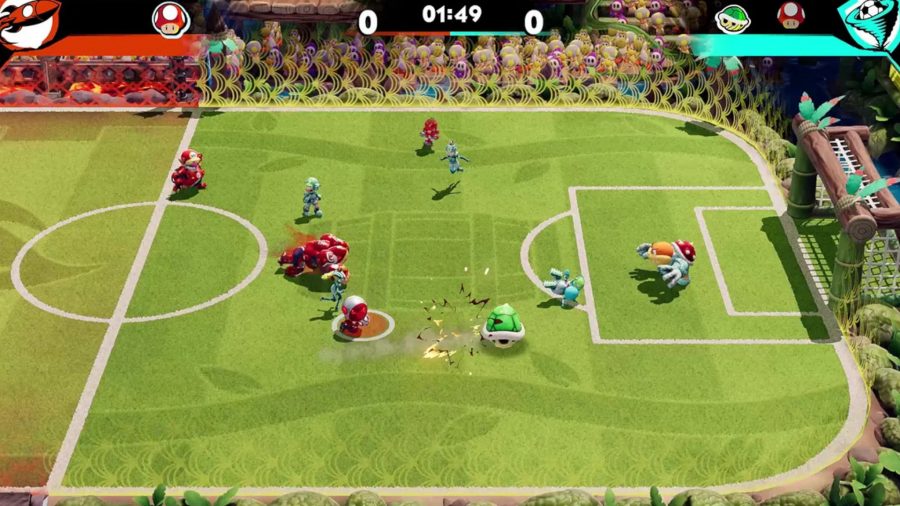 Battle League also bucks the Mario sports series trend by finally offering an online season mechanic within the strikers club hub. Strikers club is where you can create your own team – watch out for the PT Tacklers by the way – with the promise of division tables and seasonal rewards once severs properly open on launch day.

With the combination of the strikers club, and the promise of more characters and additional content further down the line, I can honestly say this is the most optimistic I’ve been about a Mario sports title standing the test of time, and that’s coming from someone who has clocked over 100 hours on both golf and tennis in the last couple of years. It’s surprising that it’s taken so long to integrate, but a Mario sports title actually lending itself to online play feels both incredibly refreshing, and exciting.

Those of you that have played Mario Strikers titles before will be glad to know that the special animations have returned, with some visual improvements to make Peach’s passionate volley sparkle even brighter. This at least slightly makes up for the absence of Waluigi’s crotch-chop, which lives on in the minds of many, with Wario’s fancy new arse bounce animation making my personal highlights instead. 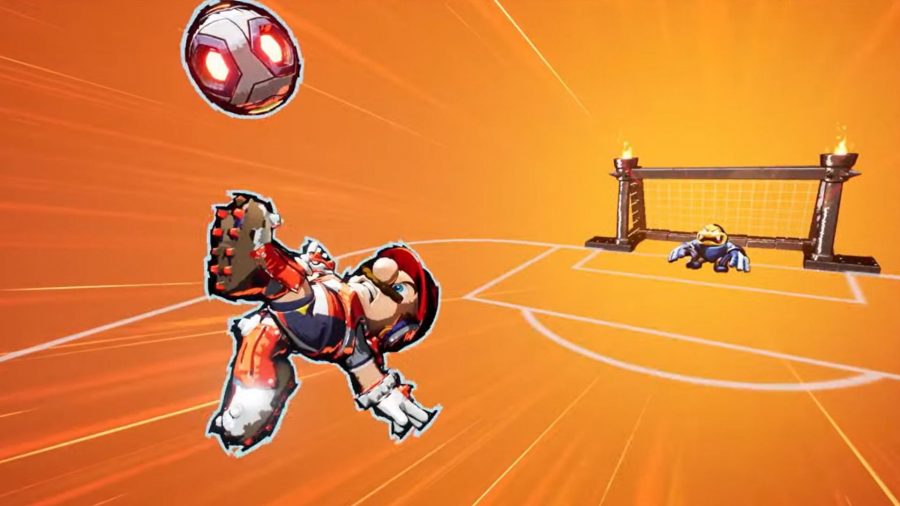 One of the defining factors that elevates Battle League above some of the criticisms levelled at other Mario sports titles on Switch is that there’s much more room for customisation. Each character has four pieces of equipment, a helmet, boots, etc, which can be traded out for an alternative that might boost speed while sacrificing strength, or vice versa, offering a level of character control not seen in previous incarnations.

The depth of customisation options means that you can create an actual build, something of a rarity in a Mario sports title, to suit your own playstyle. Want to max out Mario’s power to be a terrifying tackler? You can do that. Want to power up Peach’s speed on the pitch? You can do that too. I spent a good bit of time testing things out, and changes made in the customisation menus really do affect the gameplay, providing another level of nuance for high-level players. 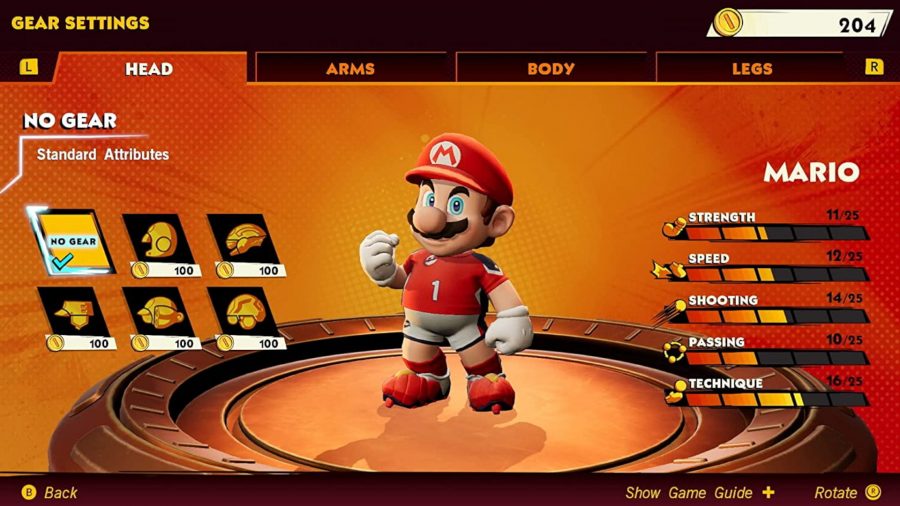 Before rounding out, I have to pay some much-needed credit to the world design team behind Battle League, one of the departments often overlooked when it comes to sports sims. Each and every stadium is a vivid imagining of an element of the expanded Mushroom Kingdom, which really shouldn’t be a surprise considering Next Level Games’ outstanding visuals in Luigi’s Mansion 3, but still serves as another feather in Battle League’s cap.

So, all in all, Mario Strikers: Battle League is a success, a shot aimed into the top corner and pulled off with serious aplomb, and Next Level Games has achieved an outcome that’s much more likely to stand the test of time than other Mario sports games, providing a refined template for the future of the Strikers series. While there’s still plenty more to see, and it’s only at launch that we can truly gauge how efficient the online mechanics are, at this point, I’m optimistic that on the third attempt, Mario Strikers: Battle League firmly finds the back of the net.

A new contender for the best multiplayer title on Switch, Battle League is here to dispel any doubts you had about the future of Mario sports titles. With balanced gameplay that includes all the classic gimmicks, plenty of depth in character and world design, and a modernised online matchmaking system, Mario Strikers: Battle League is a red-letter day in the modern history of the moustachioed plumber.