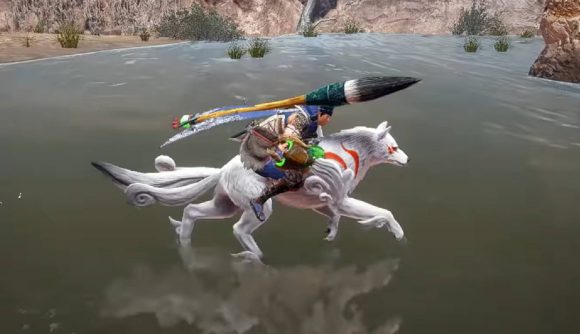 Since its successful launch in March, Monster Hunter Rise has seen a steady release of new monsters, cosmetics, and more. The recent 3.0 update added a new ending, as well as fearsome monsters like Crimson Valstrax, Apex Zinogre, and Almother Narwa. Be sure to check our weapons guides, such as the best Monster Hunter Rise Hunting Horn build, to stand a chance of defeating these colossal creatures.

As well as cosmetic items like the recent Monster Hunter Stories 2 promotion, Capcom has now revealed that the white wolf and sun goddess Amaterasu from Ōkami, will arrive as a Palamute for players to ride around in battle. Palamutes also attack and offer assistance in fights, so any Ōkami fans will be happy to have Ammy by their side.

Amaterasu is a layered armour set for Palamutes, meaning any of your current Palamutes can wear the armour, and will go live July 30 as an event quest reward. Like previous Monster Hunter Rise DLC, you have to beat a specific challenge to unlock this special reward.

Capcom has announced a roadmap of additional crossover promotions coming this year, with many more from Capcom titles very likely. Capcom Collab 3 is currently slated for August, with Capcom Collab 4 and 5 slated for Fall. Previous Monster Hunter games have received content not only from Capcom franchises like Megaman and Street Fighter, but even Nintendo-themed armour and companions from The Legend Of Zelda and Metroid series.