You would be forgiven then for not realising that Capcom made a cute, yet deceptively deep, RPG spin-off game for the 3DS called Monster Hunter Stories, using the monsters from the series to craft an open-world collecting and battling game, that looked better than it had any right to do on the tiny device. So now, thankfully, Capcom has given fans a sequel to the cult RPG that takes the visuals, concepts and tone of that game and brings it to life beautifully for your television screens.

Fortunately, Monster Hunter Stories 2: Wings Of Ruin doesn’t demand that you play the first game. In fact, it explains much of the original plot in case you didn’t experience it, so anyone who missed the 3DS title doesn’t have to worry too much. In this latest entry, you play as the grandchild of the original game’s protagonist, with several returning characters recalling their time with your grandfather.

To explain it succinctly, Monster Hunter Stories is an RPG spin-off of the Monster Hunter franchise, where instead of slaying monsters, you befriend them and garner a small team of ‘Monsties’ (monster + bestie), to battle against wild monsters and even some other monster riders.

Yes, it does sound like Pokémon. The main difference here though, is the battle system, which functions like rock paper scissors. You choose from power, technical, and speed attacks with each being effective against another. There is still a lot of depth though, thanks to different skills, the series’ famous weapons and armour, and more, so don’t think of this as an easy game by any means. Meanwhile, any fan of Monster Hunter will grasp the loop of hunting monsters for parts to then build new weapons and armour very quickly. 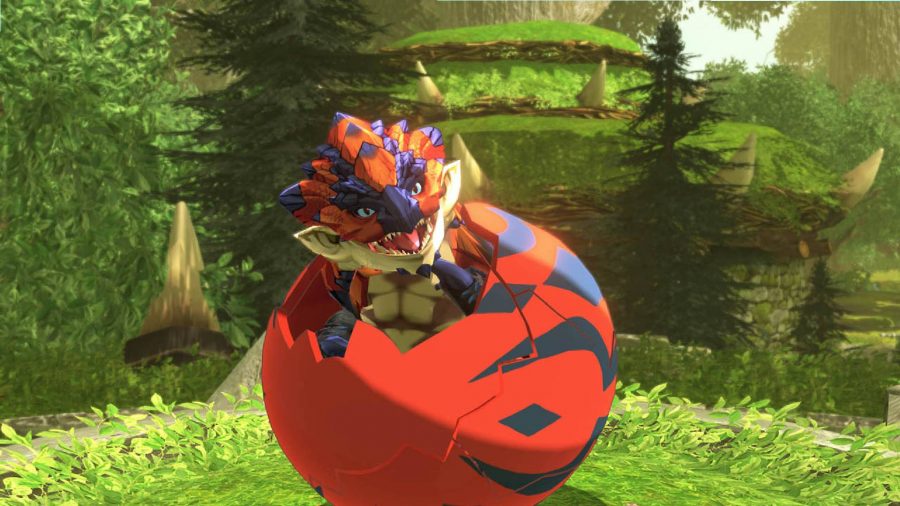 After starting out in a small island village, disturbances with the local wildlife set in motion a series of events, including the appearance of a mysterious egg and the legend of a monster with the titular ‘Wings of Ruin’ that’s destined to destroy the world. It’s pretty standard RPG stuff, but the visuals and vocal performances really sell the sincerity of the story. The vivid, cel-shaded style makes it look like an animated show in motion, and the cast of characters is strong enough to suck you in. From water effects to falling foliage, this is an absolutely beautiful game that includes strong animation work for both the monsters and characters that helps bring it to life wonderfully. Your companion Felyne Navirou might be a bit too animated at times, however, this is only because the chatty cat fills in most of the dialogue missed by your mute protagonist.

Once you start exploring you’ll also see that the vivid visuals carry over to some lush environments, with the titular monsters roaming the land in plain sight, waiting to either attack you or meet the pointy end of your axe as you grind for experience points. While a comparison to Pokémon is very easy to make, it’s not entirely far off, as your main character moves from village to village, and gains new eggs that you can hatch at the next area. Then, you can train the new monsters, each of which has new abilities that you can use in the overworld. 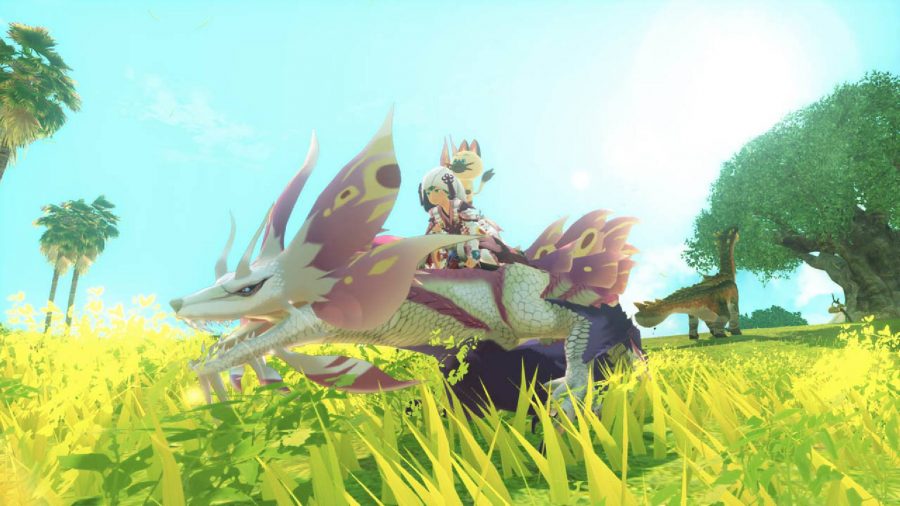 While Monster Hunter Stories 2 definitely makes a few smart improvements to everyone’s favourite pocket monster franchise, one old element it sadly clings to is the monster’s abilities in the overworld. Much like the HM moves of old, different types of monsties can utilise different moves like jump, swim, or rock bash to find new routes and reach hidden items. It then becomes a careful balance of including the monsters with these abilities, instead of perhaps the monsters you want.

Anyone who remembers carrying around a Bidoof that knew every HM move, will remember the pain of a slot in your team constantly being wasted. This is especially frustrating later in the game, when I wanted to keep my favourite monsties, but couldn’t, because I needed one with each ability. If abilities worked like Pokémon Let’s Go, or other recent entries where you simply unlock the ability to swim thanks to, say, defeating a particular enemy, it would significantly cut down on backtracking. It’s not world ending, but it really started to infuriate me towards the end. 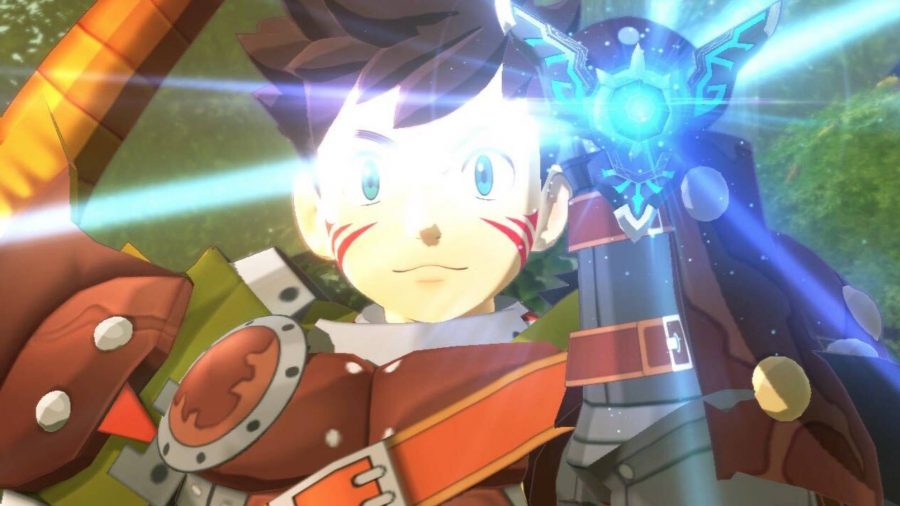 One other important thing is that you don’t simply catch monsters. You have to find monster dens and then pick up randomly generated eggs, with the monsters you can hatch from them changing depending on the location. The stats change between each egg, and you can even find the occasional shiny egg that promises improved stats from the beginning. There’s also a Rite Of Channeling that lets you move some stats over from one monster to another, but the former is sacrificed to help your new companion grow. It’s a great way to use up the many lesser eggs you hatch, and means that you can steadily improve any monster you want. So, if you find a beast you’re particularly fond of from the beginning, it won’t be utterly useless within a few hours.

Another improvement from the original Stories game is the complexity offered in the battle system, which despite being based around a fairly simple rock, paper, scissors pattern still has a lot of depth. You battle alongside your monsters, but share a gauge with three hearts. If either of you faints it costs a heart, so keeping both alive is important. You also build up your kinship gauge as you battle, which allows you to use special skills, ride your monsters, and unlock brutal kinship skills that are individual for each monster. These are over-the-top animations that showcase the personality of each beast, as well as just being a grand spectacle that adds a great visual flair to battles. You can even speed battles up with a max of 3x speed, so grinding needn’t be so dull. That’s a lesson Pokémon could certainly learn in the future.

I was constantly happy to be challenged, because instead of a roadblock, it simply feels like a puzzle to be solved

You will definitely need to speed up battles as well, as this is a game that demands some grinding. Luckily, I was so invested in the story, especially the higher stakes later in the game, as you will have to go out of your way to make sure your team is up to scratch. If you don’t learn the battle system and simply try to bash your way through, you’re in for a rude awakening. Paying attention to enemy battle patterns does make for a rewarding system though, so I much prefer this to an easier game.

There are quests you can access in every hub village, with a huge range of different tasks. These are neat little additions, and as long as you accept them all, you will often tick off several just from pottering around the world. If you need a boost, there’s also a prayer pot where you can access some temporary improvements, much like eating a meal before a hunt in the mainline series. All this is to say that the amount of complexity on offer is fantastic, and never overwhelming. I was constantly happy to be challenged, because instead of a roadblock, it simply feels like a puzzle to be solved. 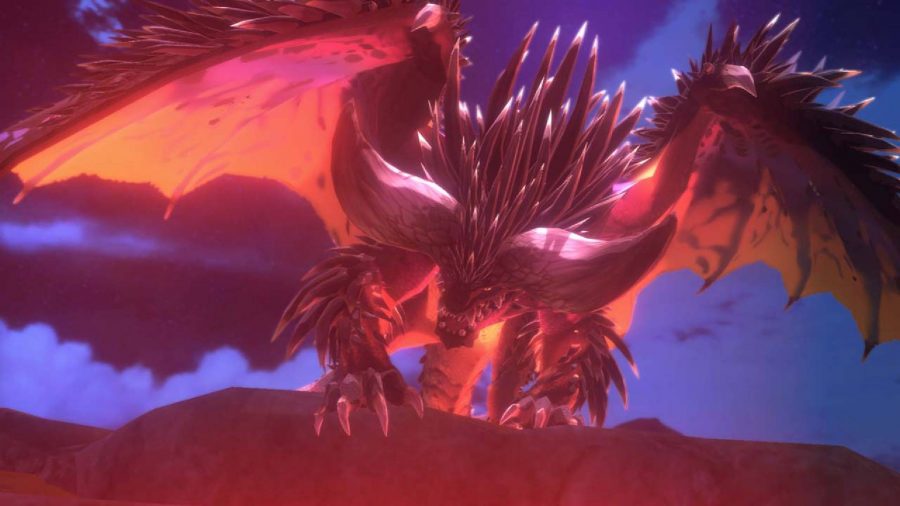 If you’re looking for some extra training, you can take on multiplayer co-op quests, where you and another player, either online or locally, explore monster dens in the hopes of battling monsters, finding eggs, and maybe even some rare items as well. This is a great little aside, and battling monsters together with other players was really fun. It all works seamlessly, and is seemingly how players will access new eggs for monsties in the game’s DLC roadmap. There’s even a tournament mode to truly test your battling skills for when your monstie team is big and ugly enough to challenge the world.

The only real negative in Monster Hunter Stories 2: Wings Of Ruin, beyond the ability system, is performance. While this is a fantastic looking game in terms of art direction, with beautiful vistas, expressive character models, and detailed but nicely stylised monsters; the framerate dips significantly. It runs at an acceptable rate considering this is an RPG instead of an action game, but sometimes during cutscenes, it seems to struggle to maintain a framerate in the double digits. Anyone holding out to play this on a Switch Pro is likely to have a very long wait, but there is a PC version that fixes this issue.

Ultimately, Monster Hunter Stories 2: Wings Of Ruin is an engaging, exciting, and ambitious RPG title that delivers something that any fan of the genre can enjoy. However, Monster Hunter fans are in for a real treat here as the world is explored and expanded in interesting ways, and building a team of your favourite monsters is immensely satisfying. However, It would be slightly better if you weren’t hampered by the abilities you need to explore the overworld. However, that didn’t ruin my near 60-hour adventure with the game, and there’s already so much to do beyond the credits, I can’t wait to dive back in. Monster Hunter and Pocket Monster enthusiasts all around will find something to love, because this is one of the most delightful and gratifying RPG experiences Switch players can experience.

This colourful RPG is a constant delight with some fantastic monsters to find, deep mechanics, an interesting story, and some great characters along the way. The game is rewarding for both Monster Hunter fans and anyone looking for a new adventure, Monster Hunter Stories 2 might just be the best monster-catching game on the Nintendo Switch.