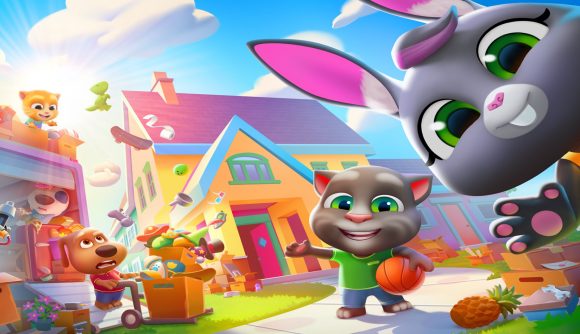 Outfit 7 has announced the release date for the newest installment in the Talking Tom series, My Talking Tom Friends. It launches on June 12 on Android and iOS, with pre-registration open on Google Play right now. Over the years, Outfit 7 has cemented itself as the de facto developer and publisher of virtual mobile pet sims, with their suite of games receiving 12 billion downloads in the last alone decade.

My Talking Tom Friends is built upon Outfit 7’s success in those previous titles, advancing the formula by letting you care for all of Talking Tom’s characters at once under the same roof. The game takes place in a kind of domestic sandbox, as you cater to the needs of your cast of creatures.

It’s a little like The Sims – if all of your Sims somehow transformed into anthropomorphic animals and forgot how to look after themselves. Characters like Talking Tom, Ginger, Angela, Hank, Ben, and Becca are all present in the house, which you can also decorate and customise to your preference.

Below you can find one of the series shorts that makes Talking Tom and its characters so beloved:

When asked about the new installment in the series, senior game designer, Barbara Erman, said this:

“We wanted to give fans the perfect blend of caring for their favorite characters and having amazing experiences with them. And where the line between ‘you’ and ‘them’ disappears as you get drawn into the bright, vivid world of games, fun, and friendship.”

If Talking Tom sounds like your kind of game, then you can get your hands on the real thing on June 12. You can also currently pre-register on Google Play, though not for iOS just yet.