There are three rules to racing games. Number one: cars must be fast. Number two: cars must be loud. Number three: Lamborghinis must be yellow. Need for Speed: Hot Pursuit Remastered nails two out of three, but we’ll call it two and a half because you can have your Lambos in that iconic shade of yellow – you just don’t have to.

Before now, the only acceptable non-yellow Lamborghini was owned by Christian Bale’s Batman, who still lives in his teenage goth phase and therefore owns a moody dark silver Murcielago. However, I opted to throw the rulebook out of the window and paint my Gallardo bright purple rather than go for something more classic or attempt any facade of stylishness. But this is a game that encourages you to throw out aforementioned rulebook, and often forces you to shred it entirely.

Now that the history lesson is out of the way, we can move onto the good stuff. Need for Speed: Hot Pursuit Remastered takes place in a fictional state of America – Seacrest County – which offers a network of roads to get lost in. It’s a mix of Arizona and California really, and each race you take part in weaves through a selection of roads you may or may not have experienced before.

Free play just lets you drive around these highways – through the icy mountains to the sandy deserts or scenic coastal climes of the west. Your races take place in any of these biomes – and sometimes multiple of them – as you trace the road network backwards and forwards, twisting and turning to ensure you never race along the same track twice. 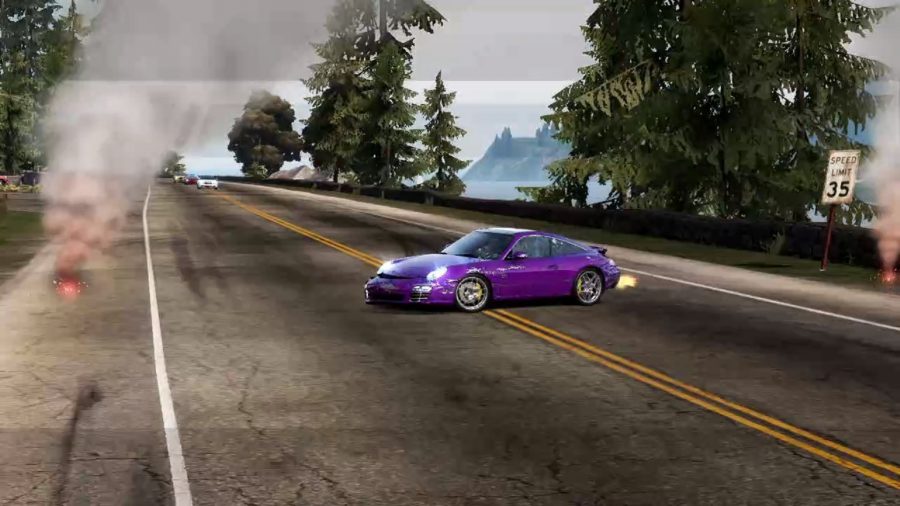 You may end up familiar with certain turns or areas, remembering to brake as you approach the waterfall, or taking a shortcut to improve your time on your second shot at a race. However, the next time around, you may be tackling that corner from the opposite direction or a civilian car may be chugging along in your ideal racing line. You have to adapt and overcome in order to win every race and increase your Wanted level.

There are three main race types that you have to deal with. The first is a simple time trial, the second is a race with any number of CPU cars, and the third is the eponymous Hot Pursuit. Each race type is spread out across the map, and different cars are allowed, to keep things spicy and fresh. Sometimes you even get the chance to preview a company’s car – perhaps a McClaren or Zonda – as a taste of what you can unlock if you keep playing.

While time trials and regular races provide ample opportunities to increase your Wanted ranking and unlock new vehicles, the best experiences in the game are the Hot Pursuit races. These see you face off against other racers, while also trying to evade the police and their less-than-textbook methods to stop speeding drivers. 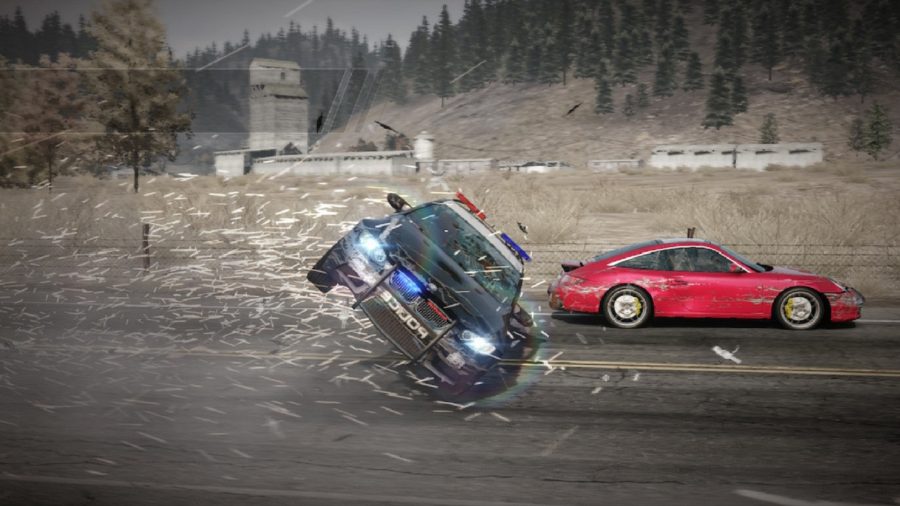 There is also the option to play as a police car, but there’s not a lot to motivate you to take that choice. Becoming Captain Killjoy was not high on my list of priorities, especially when regular racers get access to the majority of the gadgets available to the cops. Spike strips, EMPs, and speed boosts (yes, on top of your regular Nitrous Oxide boost) are all available to both racer and officer – the only difference is that you can call in road blocks and choppers as a cop. Yeah, that’s a cool idea, but you have no control over these after requesting them, so what’s the point? Besides, this is a game for throwing out the rulebook, not enforcing it.

You don't automatically lose a race if you crash out - you suffer through an excruciating slow-mo replay of your error before being let loose on the roads again. Then you'll have to drive even more dangerously to catch up with opposing racers, increasing the risk of another high-speed collision.

As such, I continued to ram police officers off cliffs and into their own road blocks, each time triggering a cinematic slow-mo cutscene of the ensuing pile-up. This sometimes causes issues when you’re suddenly back in the driver’s seat heading for a sharp corner at top speed – a corner where you would’ve braked were it not for the camera lingering on the exploding blue-and-white Porsche in your wake. Other than the occasional interruption, the races are great fun – the perfect balance of high speed thrills and carnage-inducing crashes.

White the social media-esque leaderboards for sharing your best times with friends were fairly groundbreaking back in 2010, a decade of this kind of thing has seen it become pretty standard in racing games. However, it’s another motivation to jump back into a completed race when there wouldn’t otherwise be much point. You see, at least in the early-to-mid stages of the game, pretty much every time you win a race you unlock a new car. 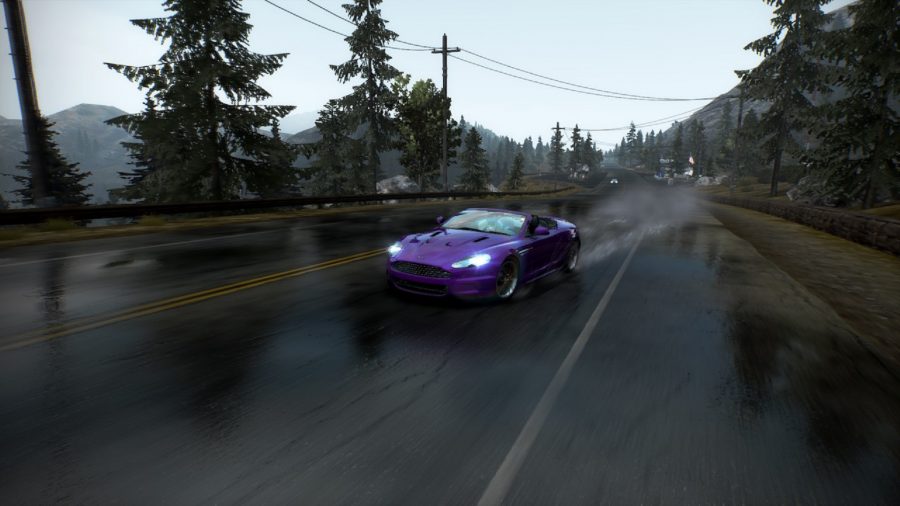 It felt a bit much at the time, like I hadn’t had a chance to properly try out the last car before the next exciting motor was thrust upon me, but it’s the perfect distillation of “just one more game.” You can’t put your Switch down for the night if you’ve just unlocked a pristine new Dodge, engine revving and wheels eager for the taste of Seacrest County’s finest tarmac. You just can’t.

So, you sit through the short advert for your new motor, and pick your colour – purple again – as a posh American woman lists some facts about the car seemingly straight from the manufacturer’s website. It’s like the most boring moments of Top Gear narrated with the monotone enthusiasm of someone reading the Yellow Pages – although without the ham-faced presenters chortling about a made-up racing driver, too. It’s a far cry from the blaring noise of pounding engines and throwback pop-punk tunes once you hit the road. Luckily you can skip through this and quickly get back on the road after spending a minute or two on the loading screen – a screen that I saw a little too much of for my liking.

The remastered elements of Hot Pursuit are perhaps wasted on the Nintendo Switch due to the console’s limitations. While Xbox and PlayStation consoles can showcase the cars, races, and landscapes at 4k definition and 120hz, the Switch is stuck at a comparatively meagre 1080p. However, the fact that you can take your chaotic races on the go makes up for that. Just don’t expect a jaw-dropping advance in graphics – the game looks much the same as it did ten years ago, especially in handheld mode. 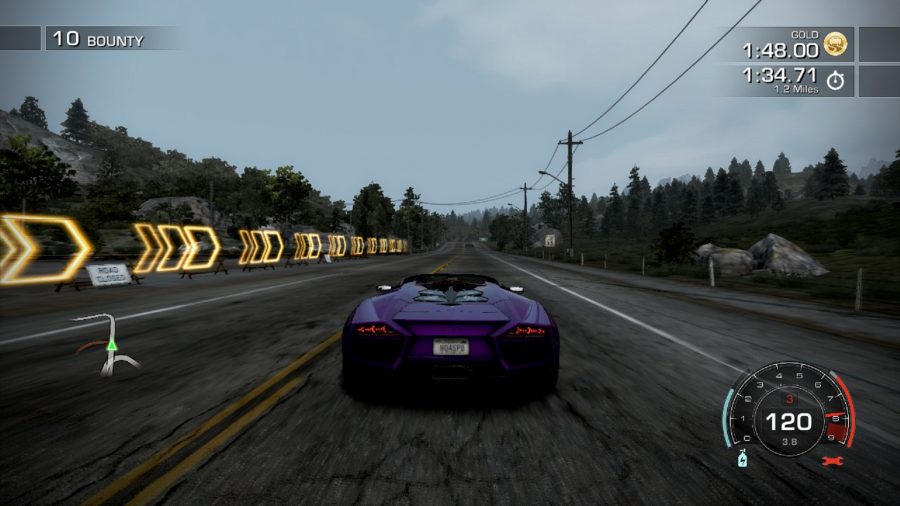 This is a game that, while idling on the loading screen, gives you a hint that dissuades you from crashing into opposing racers as it will affect your speed. But, in the moment that’s not an option. Not when they’re right on your tail, or tantalisingly sandwiched between your car and a potentially-lethal roadside barrier. Not when the game, the very same game that dissuaded you just moments earlier, rewards you with 500 bounty for taking out an opponent. Hot Pursuit wants you to break the rules, to break its own rules, to trash cops, and to win races. And that’s why it’s so fun.

High speed chases and spectacular police take-downs provide plenty of thrills, but a lacklustre remaster, and a couple of annoying quirks let the arcade racer down.