It can be hard to follow up a cult classic years after its release – especially a title like The World Ends With You. It was so heavily entrenched within the hardware features of the DS, which the Switch port suffered to translate properly.

But now we have a whole new entry, fittingly not given a number, but instead labelled as a new start, and it truly feels like a fresh new chance for this stylish series and its rich world to get the recognition it deserves.

NEO: TWEWY casts you as Rindo Kanade, a high-school student living in a heavily stylised version of Tokyo’s Shibuya district. Many of the game’s locations are drawn straight from the real world, like the famous Tower Records, but given brightly coloured and magically warped makeovers that give off a strong other-worldly vibe. The spirit of Tokyo informs every inch of the world but with enough artistic license to ensure the game has a personality all of its own.

After finding a seemingly innocuous pin, Rindo and his friend Tosai “Fret” Furesawa are thrown into something called the Reaper’s Game and suddenly find themselves in a version of Shibuya that looks the same, but feels very different. What then takes place is a battle against other teams to win the Reaper’s Game, battling hordes of enemies called Noise along the way. Before long the team is joined by the intelligent and pragmatic Nagi, as well as the brooding and surly Miniminoto, who fans might recognise from the DS original. 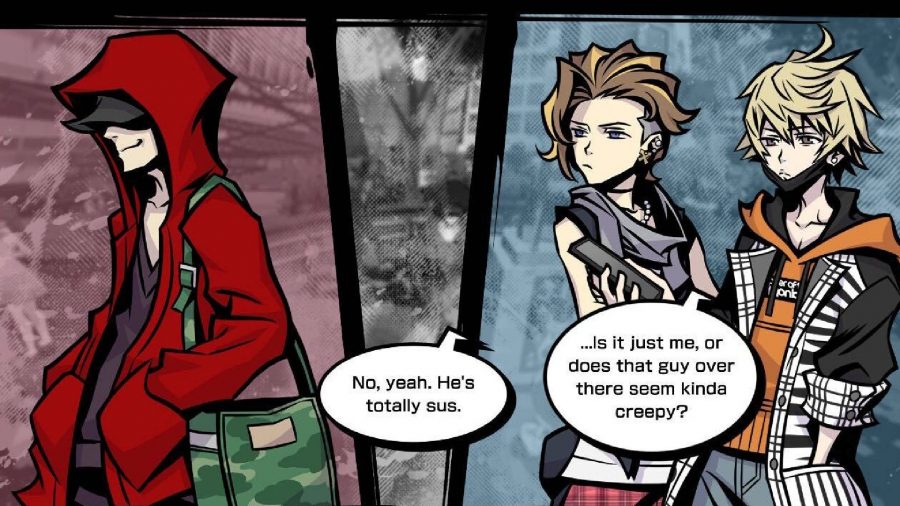 To say much more of the story would be to give too much away, but it’s safe to say that the anime inspiration flows through every second of this adventure, and what starts as a normal day turns into a battle with huge consequences and countless intimidating and weird characters vying for control, rewards, and sometimes total domination. The world you enter also doesn’t work like the real world, as you find that each member of your team suddenly has latent psychic abilities. You’re able to unscramble people’s memories, dive into stranger’s consciousness, or even control time. The many ways you interact with both the game’s world and its story are fantastic and important pillars of the narrative and mechanics.

Each chapter is a day, and each day is another opportunity to earn points in the Reaper’s Game. You explore the different parts of Shibuya, eat food at many different restaurants for stat boosts, buy new clothes that also give advantages to your stats, and even use your psychic powers to find many hidden side quests. You can even revisit chapters (or days) thanks to some time travelling antics, so you’ve got plenty of opportunities to complete every quest and meet every character. What you do more than anything, however, is battle. 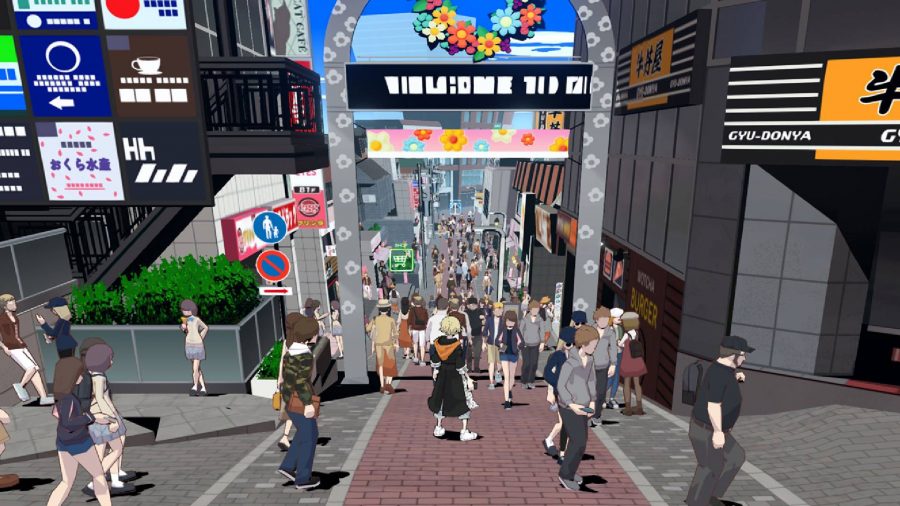 In the DS original, battles take place across both screens and force you to balance between button inputs and touch controls, paying attention to the characters on both screens simultaneously. That simply can’t translate to the Nintendo Switch. So NEO: TWEWY has a new battle system that does a great job of bringing that energy and a lot of the systems that worked up to date. You control one of each of your four party members using different buttons on the controller, and assign them attacks with the different pins you find either in shops or from defeating enemies. Each attack also has a gauge that depletes with use, so it’s up to you to pay attention to your attacks and not completely run out of energy, but also to balance and combine pins in the most effective way.

There are so many different pins to find, and an almost immeasurable amount of combinations possible. You can find the exact attacks that work for you, or work against different enemies, and then play around with other pins you think support that style better. You can also level pins up and even evolve them into more powerful versions, plus there are uber pins that can unleash incredible amounts of destruction. 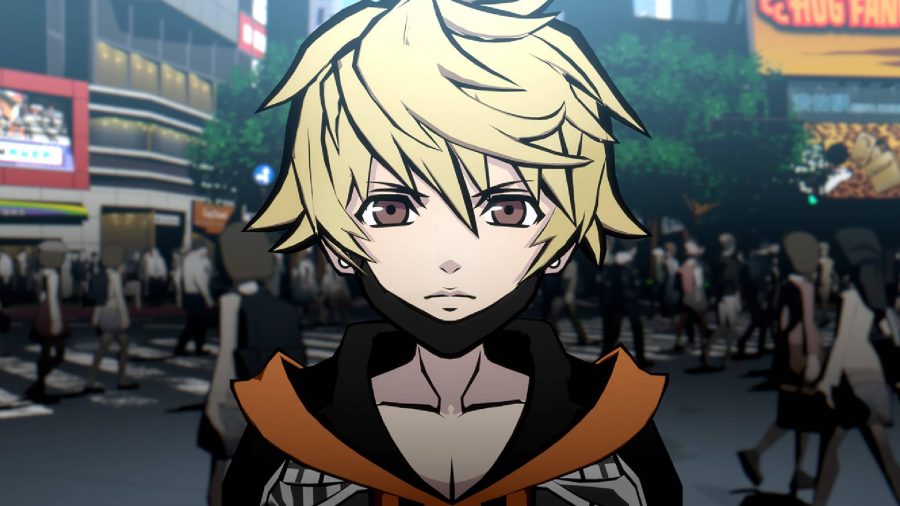 Of special significance as well are the amazing enemies known as Noise. Appearing as warped versions of real animals, they feature heavily saturated and graffiti-inspired designs that replace limbs and faces with some wild creative choices, and each one is a joy to find and defeat. An early boss fight with a giant gorilla is a fantastic showcase of the spectacle on offer, as it towers over Scramble Crossing and Shibuya at large, only to leap down and pummel your team with ground shattering attacks. Each enemy has a different pattern to learn as well, so while having a character on each button might sound like it’s begging for some button mashing, you quickly learn your enemy’s different attacks and how best to combat them in a smart, frantic, and hugely rewarding combat system.

You can visibly see Noise in the overworld, displayed as icons that hint at the monsters within, which when encountered will chase you through the streets until you fight. What you can also do though is engage several different Noise, so you can chain together subsequent battles. The fights are tougher, but the rewards are higher, and with such a satisfying combat system I relished chaining together massive battles and swarms of enemies to decimate.

Anyone looking for an even bigger challenge can adjust the difficulty at any time, or even lower your level to make fights tougher, but you have a higher success rate in finding rare pins. It’s an incredibly flexible battle system that feels great, and lets everyone play how they want, and throughout my time I never avoided them as I relished any opportunity to dive back into the energetic, and engrossing battle system on offer. With each character assigned to a different button input, it feels a bit like the Mario and Luigi RPG series but on several cans of red bull, and the customization possible is almost overwhelming. 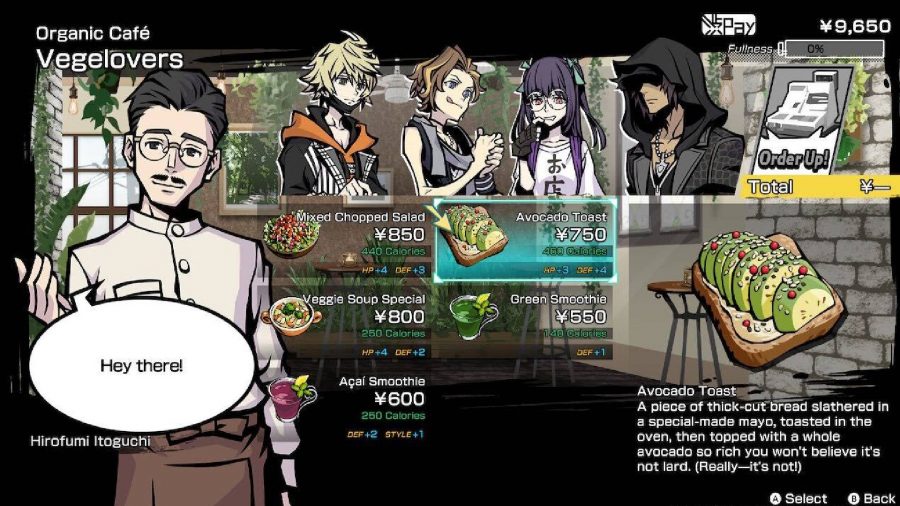 Honestly, every corner of Shibuya displays the same stylish design choices and attention to detail that make the battles come to life. While most of the story is explained with static panels of the character’s art, several elements elevate it. From the snazzy sound design, eloquent and energetic dialogue, the vividly colourful and uncanny way Shibuya is portrayed, and even the smaller details like the amazingly detailed food available at vendors around every corner. Neo: The World Ends With You might not have the biggest map, but it feels completely crammed full of character even between the crowds of characters roaming the streets.

You want to meet as many characters as possible while you’re exploring as well, as abilities are tied to your social network. Completing side quests and meeting characters in the main story helps you to fill in branches in your social network, with icons showing each character that are eventually connected with your actions. Each character represents an ability though, and you can earn FP (friend points) through challenges to spend on abilities you find as you make new friends. These can be as simple as unlocking new difficulty modes, and some later characters allow you to equip more uber pins. It’s an incredibly smart way to make interactions rewarding, and forced me to seek out every side quest I could, but I was always rewarded with more great interactions. It’s simple, but a genius way to not only fill out this smaller, intricate world with side quests, but also to incentivise exploring every corner and speaking to every character with some amazing hidden abilities. 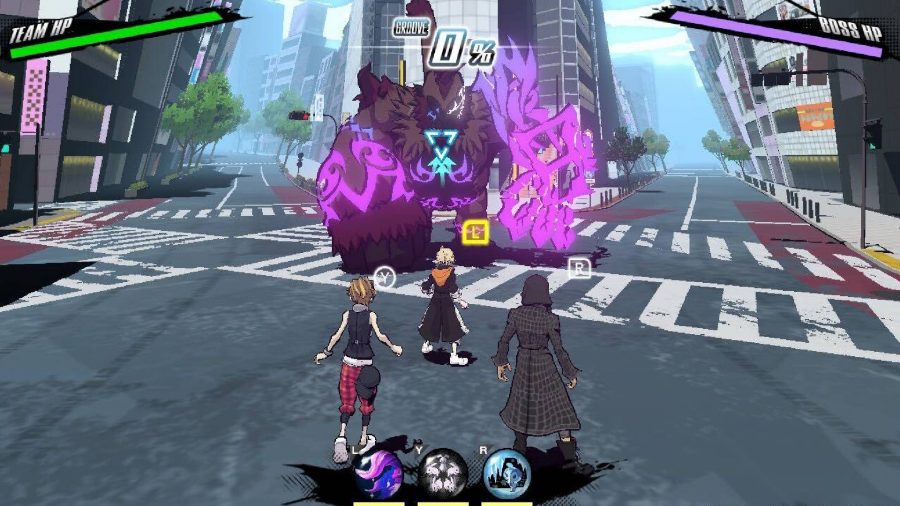 It can’t all be good though, and I’m sorry to report I had some minor grievances with Neo: The World Ends With You. First of all, on Nintendo Switch there are some occasional frame rate issues, especially in frantic battles. I never had any issues in the overworld, but a few too many enemies or attacks at once and it struggles to keep up, which is a shame. The action is so smooth and visually appealing, I would have appreciated a higher framerate to showcase the battles better. It never got in the way of strategy or lost me a fight, but it was noticeable.

Lastly, and it pains me to say this, but the soundtrack just isn’t up to the standard of the original. If this was its own game I might be more lenient, but the DS title had an astonishingly good soundtrack, so the songs on offer here just didn’t reach the highs I was expecting. Even despite the fact original composer Takeharu Ishimoto returned to compose, and the sequel takes a lot of melodic cues from the original, I don’t feel the standard here matches the level of quality seen everywhere else in the game. It’s not bad, though there are a couple of dud tracks for me (the battle theme in particular, Your Ocean, really grated on me), but I was certainly expecting more. Luckily you can purchase records at different stores, including tracks and remixes of tracks from the original game, but I wish I had the option to change the battle tracks.

Overall, Neo: The World Ends With You achieves an impossible task of both paying proper respect to the original title but also reinvigorating the franchise with a gigantic new dose of energy and ideas, that make this feel like one of the smartest and most stylish RPG titles you can play on Nintendo Switch. Every conceivable corner of Shibuya is stuffed with something fun to do, while the frantic battle mechanics, great characters, and wild story mean there’s never a dull moment either. Simply put, this is the perfect time to get into the series, and thanks to bags of personality and some seriously smart design choices this is one of the best RPGs on Nintendo Switch.

Neo: The World Ends With You review

Breathing new life into the series while respecting what made it great to begin with, Neo: The World Ends With You is everything fans dreamed of. There’s still room for surprises though with some crafty battle mechanics, dark story twists, and a densely packed and beautifully stylised version of Shibuya to explore. A fantastic return for the cult classic RPG series.

9
The World Ends with You: Final Remix - Nintendo Switch