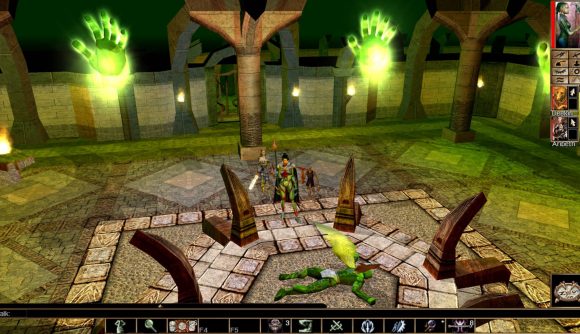 Neverwinter Nights is an official Dungeons & Dragons adventure game now available on the App Store. BioWare developed the original Neverwinter Nights way back in 2002, Beamdog then gave the game an Enhanced Edition, which is what just dropped on iOS.

Neverwinter Nights’ campaign takes place in Neverwinter, and you must travel through this region of dangerous cities, monster-filled dungeons, and lawless wilderness in search of a cure for the plague ravaging the world. The classic RPG has over 100 hours of gameplay from the original campaign and comes with six free DLCs. What really makes Beamdog’s work stand out is the cross-platform multiplayer, allowing you to play with mobile, PC, and console players. The sense of a community is emphasised by the community-run campaigns which can host up to 250 players.

We here at Pocket Tactics have had our eyes on Neverwinter Nights since it launched on Steam in 2018. One thing is certain, Neverwinter Nights is a fantastic RPG experience for veterans of the genre, as well as a great place for beginners to learn the ropes.

If you’d like to watch a spoiler-free trailer of Neverwinter Nights, you can find it below:

You can download Neverwinter Nights from the App Store, and for any of you wondering exactly what $9.99/£9.99 gets you, check out our list below:

Looking for more worlds to explore? Find your next adventure in our list of the best mobile RPGs.