Award-winning narrative studio Inkle is at it again with its new story-rich game, Overboard. Taking inspiration from classic murder mysteries like the works of Agatha Christie, lose yourself in the intricate and scandalous tale of Veronica Villensey as you lie, cheat, and seduce your way to victory. Do you have what it takes to get away with murder?

Overboard – much like dear Mr. Villensey – dropped into the water quite unexpectedly, but certainly made a splash. Originally conceived in January 2021, the surprise project was designed to be a fun, quick pick-me-up for Inkle’s developers in the face of yet another COVID-19 lockdown. Released this month, Overboard is the team’s debut Switch title and its first game for iOS since 2016’s Steve Jackson’s Sorcery.

Like its previous work, Overboard combines beautiful illustrations with titillating narrative puzzles that keep you on your toes throughout. With a highly impactful multiple-choice system, your decisions are at the heart of the story, and you will find yourself grateful for the short but extremely replayable game loop as you work your way around the deck, covering your tracks as you go.

You play as Veronica Villensey, on a boat en route to America, who has thrown her unfaithful but wealthy husband over the rails. You are faced with difficult situations, where every one of your actions has consequences. Did you accidentally tell the steward that your husband was asleep, only to tell someone else he went missing last night? Well, you can guarantee that will come back to haunt you – unless you do something drastic in time! 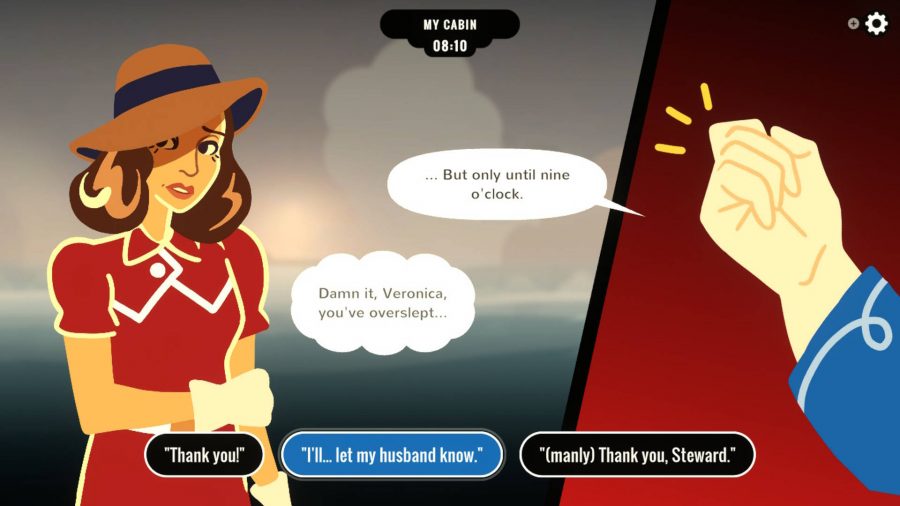 You will find yourself playing the story over and over again

With multiple items and locations at your fingertips, you are constantly pushed to question how they can work to your advantage within the allotted time. Perhaps you could slip your sleeping pills into the nosey old lady’s drink to silence her? Or you could plant your earring on the lovesick mistress? Or maybe you should pop to the chapel for some words of wisdom from the big man in the sky?

You will find yourself playing the story over and over again, uncovering many secrets as you blackmail, befriend, and betray the other passengers. The game will occasionally offer you suggestions, and highlight dialogue options you previously chose, all of which help you to achieve your goal of landing in America with Mr. Villensey’s insurance payout – perhaps with a dashing new love interest in tow.

The game boasts a great soundtrack, complimenting the 1930s oceanic setting with rolling orchestral tunes, as well as some fun sound effects that add to the dark humour peppered throughout. The visuals are limited to mostly static images, but that does not detract from the life breathed into the characters by the compelling dialogue. 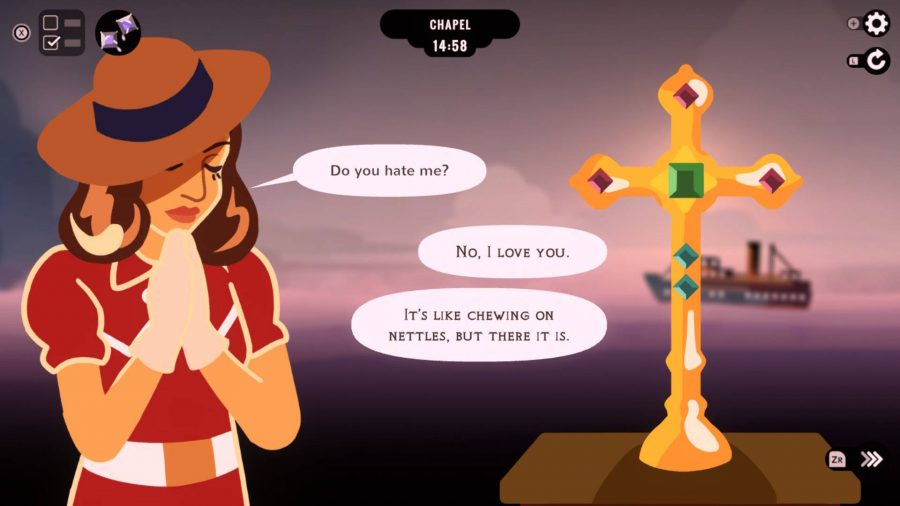 Due to its short, cyclical runtime, it works brilliantly as a portable game. Whether you are playing it on Switch or iOS, it’s a great little title to pick up on a long journey, or while curled up on the sofa with a cuppa. Forget your troubles for a while by focusing on Veronica’s instead!

All in all, Overboard is an engaging ode to both choose-your-own-adventure stories and the murder mystery genre at large, making this surprise release a very pleasant one indeed.

Overboard is an engaging and puzzling narrative experience, with a striking visual style and a great level of replayability to boot.