Pascal’s Wager may sound like a Gallic gambling game, but it is in fact an argument formulated by the French philosopher, Blaise Pascal. The crux of the argument suggests that we should hedge our bets by believing in God and abiding by his rules. Sure, we may have to spend our Sunday mornings sitting on uncomfortable pews in draughty churches. We may have to sacrifice some of life’s little luxuries and abstain from certain unwholesome practices. However, in return, there is the prospect of a pair of wings, a harp, and eternal happiness. Then again you could just throw caution to the wind, live the life of a scoundrel and take the chance that you will not have to spend the afterlife stoking the fires of Hell.

You may well ask what has all this to do with mobile games? Well, enter Pascal’s Wager and lead character, Terrence, who has been banished from the church for transgressions and is struggling with his theological doubt. Who is Terrence? Imagine tearing The Witcher’s Geralt of Rivia away from yet another round of Gwent and dumping him into an even bleaker and more hostile world, heavily influenced by Souls-likes. Indeed, the elevator pitch for Pascal’s Wager must have been to replicate Dark Souls’ aesthetics and gameplay on mobile devices (and if you like a challenge, check out our best mobile roguelikes for more). Apple was suitably impressed, being quick to jump on the bandwagon and showcase the game on its latest devices.

Talking of horse-drawn conveyances, Pascal’s Wager begins with a cutscene carriage ride. It may not give the PS4 underneath your TV any sleepless nights, being a bit blurry and choppy (more VHS than UHD). However, for a platform that not that long ago saw controlling an ever-growing snake as the apex of mobile entertainment, it is mightily impressive. Obviously, you are not going to get the lavish detail and extra polish that a triple-A console release allows. Yet, for sheer bloody-minded ambition, the developer, TipsWorks, deserves admiration.

As already touched upon, our hero resembles someone cosplaying Geralt at a comic convention. Indeed, with a name like Terrence you would assume that he would be more at home sifting through stalls of limited edition Funko Pop!s rather than hacking and slashing his way through monster-ridden landscapes. It is a dark domain, both metaphorically and literally. The sun has long since crashed into the sea, causing a dark fog to enshroud the world. Only the mysterious colossi, who emit sparks of light can keep the fog at bay. But now even these glorified standard lamps are beginning to fail, and it is your job to find out why.

The first few combat encounters serve to lure you into a false sense of security. Terrence uses a combination of fast slashes and powerful slices to dispatch a few blissfully unaware snail guys without so much as breaking into a sweat. However, any game inspired by the gothic action roleplaying of Dark Souls (and if you’re looking for more, we’ve popped a bunch in our best mobile RPGs list), which is admired and loathed in equal measure for its unforgiving difficulty, needs to be tough. Thus, any hopes of a walk in the park are laid to rest as soon as you encounter the first boss. This is also the point at which you will also realise that the touch controls will simply not do.

It is not enough to just master the art of stabbing and lunging, you will also need to perfect the parry and dodge, and all of this is just too much for touch controls to handle. Now is the time to dust down a trusty console controller and take advantage of Apple’s new pairing feature. Even with a controller, you are still likely to die numerous times, but you will at least stand a chance of working out each boss’s weaknesses. Each move has to be considered, as stamina is limited and mindlessly pummeling away will only get you killed. The game’s influences are obvious and with the right controller, combat works well. Taking down a boss that has been making mincemeat of you feels immensely rewarding. 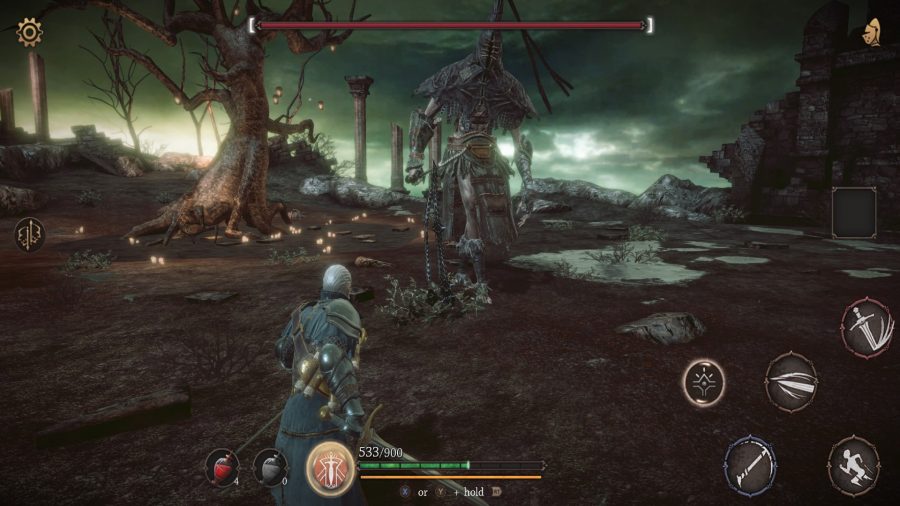 The game requires quite a bit of backtracking and with no detailed map or compass, and few landmarks, travel can be confusing

Pascal’s Wager does try and introduce a few ideas of its own. Exploring such a harrowing world has an impact on Terrence’s reason. If he doesn’t restore his sanity with potions then his mental state can lapse into the abnormal or, worse still, lunatic. A neat touch is the way that Terrence perceives how the world changes as his sanity slips away. The skies redden, enemies become tougher to defeat and our hero’s abilities weaken. On the plus side, defeating enemies whilst non compos mentis will earn extra rewards.

So far, I have only talked about Terrence, but other adventurers are encountered along the way. There are a total of four characters, each with their own combat styles and related skill trees. You can take two characters into battle and as soon as one is defeated, the other will enter the fray. This adds a welcome extra layer of strategy, as you try and work out which characters are best deployed against a particular boss. 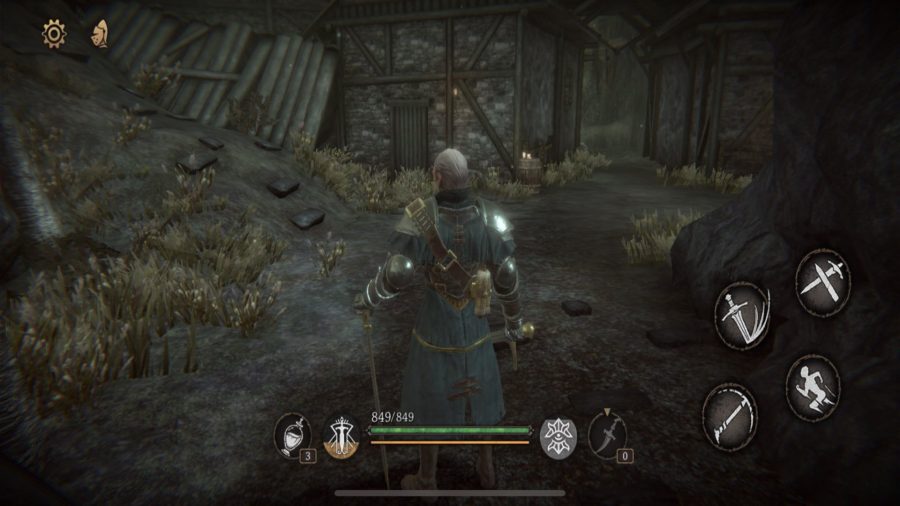 In addition to the unsuitable touch controls the game does have a few other problems. The text translation can sometimes feel awkward and the camera is a bit twitchy. The voice acting is AmDram; understandable when taking into account the game’s much lower budget. On the positive side, the music and sound is excellent, creating a wonderfully creepy and bleak atmosphere.

Pascal’s Wager replaces free-range roaming with small, self-contained areas. This is a blessing as navigating your way around the levels can become frustrating. The game requires quite a bit of backtracking and with no detailed map or compass, and few landmarks, travel can be confusing. The latest version includes a jar of ten jellyfish, which can be used to leave waypoints. Even so, a map of your immediate surroundings would really cut down on the frustration, especially since visiting shrines to restore health and save progress also causes defeated enemies to respawn. 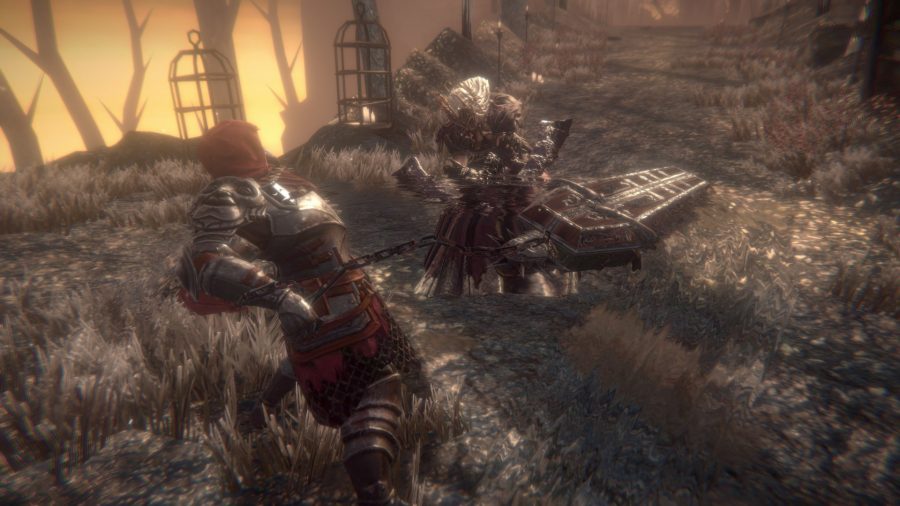 There is a lot to admire in Pascal’s Wager, it offers 20 hours of challenging gameplay without resorting to in-app purchases. It shows ambition and scope, and although it could be accused of borrowing too much from Dark Souls, it has at least captured the tone and core gameplay of its muse. I just wonder if there is really a market for this type of game on mobile devices. The game pretty much demands that you play with a controller, which is not the ideal set-up for playing on the bus. Even if you are going to play at home, the chances are that you already have a console where such games are easier to play.

A bravely ambitious game. Worth playing if you are not easily frustrated and prepared to use a separate controller.