In the verdant world of Nintendo franchises, lumbering behemoths like Mario and Zelda gorge on attention. Skittering around their ankles over the past two decades has been Pikmin, a beloved but undernourished scamp of an IP that always seems to be in the wrong place at the wrong time. All three mainline Pikmin entries have launched across two of Nintendo’s least successful consoles.

Pikmin 3 Deluxe is the latest of Nintendo’s efforts to rescue its wonderful Wii U-era software from obscurity, and arguably the most worthy. Given that most Switch owners won’t have played Pikmin 3 before, then, it’s probably wise to revisit the fundamentals.

The game’s campaign sees you taking direct control of a stranded trio of tiny alien spacefarers named Alph, Brittany, and Charlie. Planet PNF–404 is teeming with life, including the oversized fruit that they so badly need back at home. Helping with the harvesting are the titular Pikmin, a mysterious plant-ant hybrid that you can literally launch at any problem, be it food gathering, fighting, construction, or demolition.

These busy creatures come in five different colours, each with their own handy abilities: red Pikmin are great fighters and resistant to fire; yellow Pikmin can be thrown higher and conduct electricity; grey ‘rock’ Pikmin can smash fragile barriers and enemy skulls; pink Pikmin can fly; and blue Pikmin can swim.

Across five sprawling maps, each smartly gated by natural obstructions and unfinished infrastructure, you’ll be required to employ your Pikmin resources to obtain new components and items of food. You’ll also engage in combat with the local fauna, which involves sneaking around to their blind side, exploiting weak points, and managing the odd tactical retreat.

Ultimately, every day of Pikmin plays out like a condensed, zoomed-in real time strategy game. You can even split your forces up into three separate squads and flick between them at will. Indeed, some of the puzzles you’ll stumble across will actively require you to do so. 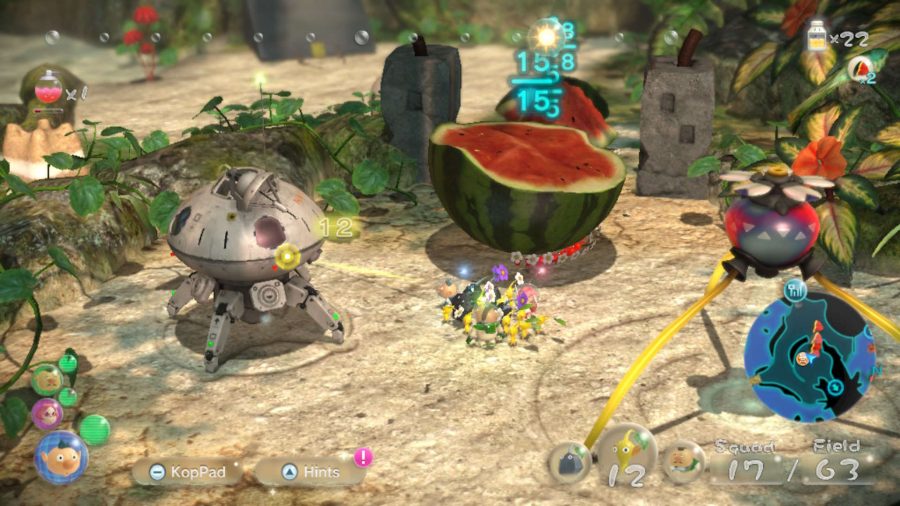 Altogether, Pikmin 3 Deluxe is as absorbing as it ever was. There’s a unique sense of mounting panic that sets in at the end of every day, as you seek to finish what you’re doing and corral your troops before virtual sundown.

The game continues to demand quite a lot from you in terms of control mastery, and your Joy-Cons can seem a little overloaded at times. It’s too fiddly to separate out individual Pikmin varieties, for example, and all too easy to drop a catastrophic bomb attack in the midst of a close quarters assault. We’re glad to see the offer of motion controls carried over from previous iterations, but without the Wii controller’s precise hardware they feel a bit janky. I soon settled on the default analogue controls, and found them to be adequate, doubtless thanks to the improved lock-on function.

Despite these initial trials, Pikmin 3 Deluxe’s campaign continues to be a little too easy on its default Normal difficulty level. You’ll accumulate a large surplus of run-fuelling juice early on, which starts to make the game’s gloopy currency feel a little valueless. Nintendo has added an Ultra Spicy difficulty mode to Deluxe, but only as an advanced Game+ option when you’ll have already seen much of what the game has to offer. 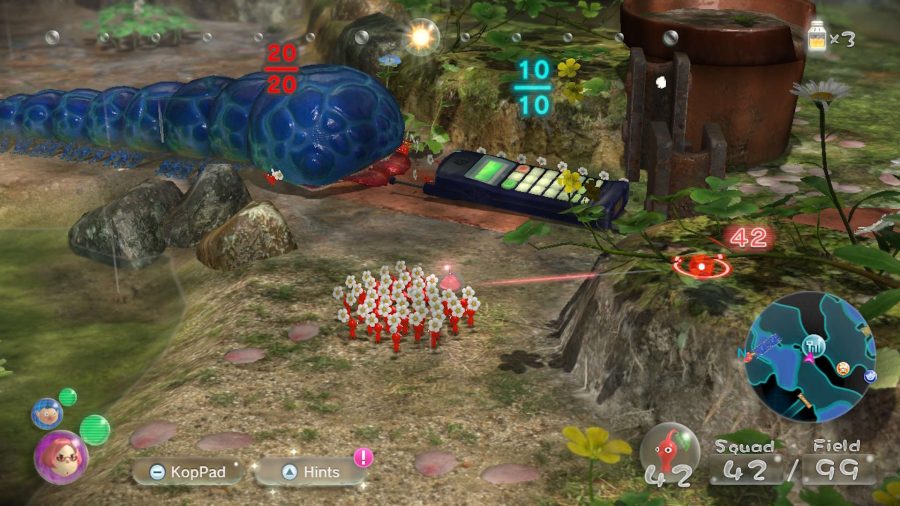 Otherwise, this is a comprehensive package that includes all of the original game’s DLC as standard, alongside a small helping of brand new content. The latter takes the form of 14 additional challenges, which cast you as Captain Olimar and his sidekick Louie from the first two Pikmin games. The offer of some insight into what these two characters were doing during the events of the campaign is enticing, but it essentially amounts to more of the existing DLC Missions, which are simple timed challenges to collect as much fruit or battle as many enemies as possible.

Perhaps the biggest Deluxe addition, especially for previous players, is the ability to experience the compact campaign in two-player co-op. As the Mission and competitive Bingo Battle modes previously demonstrated, Pikmin makes for a fabulous multiplayer experience, and finally being able to play the whole thing in split-screen is a joy. There hasn’t been too much effort made to smooth out the transition, however, with some confusing clone and body-swap moments (especially early on), a dodgy camera during boss encounters, and a fudged system for throwing your fellow player.

I was particularly disappointed to note the lack of technical and visual sheen added to this Switch version. The original was arguably the best-looking game on Wii U, but it would have been nice to see more of an advance beyond the 720p/30fps original when docked. There’s nothing ‘Deluxe’ about it. 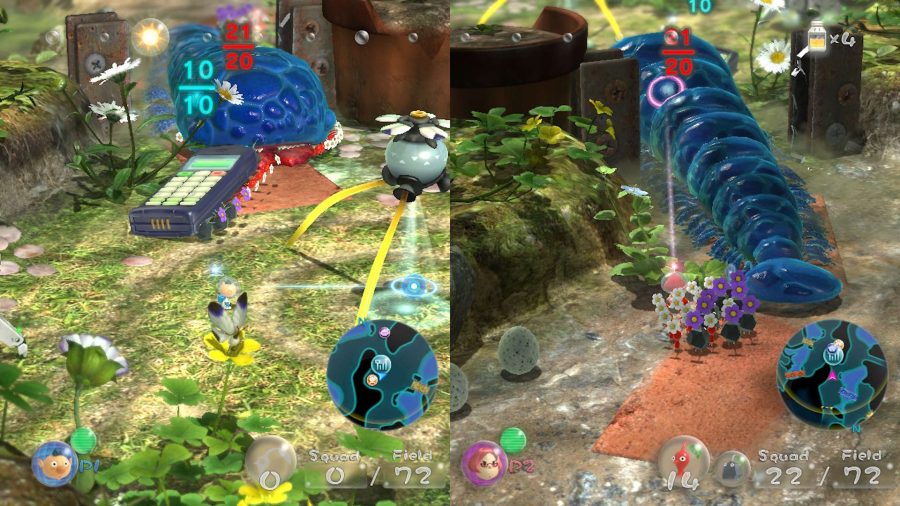 Things are even lower-res in handheld, but the game remains surprisingly playable in this form. Nintendo’s original decision to keep the camera pinned quite close to its protagonists really pays off in terms of portable clarity, and I wound up playing far more of Pikmin 3 Deluxe in handheld than I had expected to.

Pikmin 3 Deluxe is another first party Switch port that does enough to justify its existence, offering a deserved second bite at the cherry for an overlooked classic. It’s a shame that Nintendo didn’t go that extra mile to make it the truly sparkling revamp that fans might have hoped for. But for the many newcomers out there, there’s really nothing quite like Pikmin.

Pikmin 3 Deluxe is another comprehensive re-release with a welcome multiplayer component, but it’s a shame Nintendo didn’t polish it to the fine sheen that it deserves