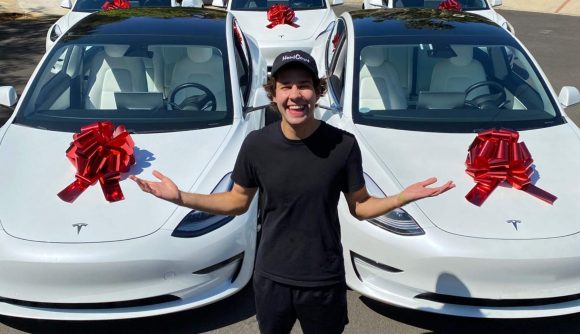 October 07, 2020: We’ve updated the following story to clarify that the Press Play Slots portals competition is only open to US players at this time. Plus, if no one is able to navigate all 25 portals on their first attempt, the grand prize of $1 million will not be awarded.

With the PS5, Xbox Series X, and iPhone 12 just around the corner, your wallet might well be starting to feel a little light. Worry not! Mobile app Press Play Slots has now partnered with YouTube and TikTok star David Dobrik to announce that it will be giving away a whopping $1.25 million.

One lucky player can potentially net themselves a grand prize of $1 million, with the remaining $250,000 being divided up into smaller prizes. So, what do you have to do to win all that cash? Basically, you need to download the Press Play Slots app and complete a tricky portals game on your first try. If you fail – and most obviously will – you can keep playing for a chance to win $20,000. Again, though, this prize is limited to the first 10 players who manage to navigate all 25 portals. A further $50,000 in smaller prizes is also guaranteed to be awarded.

The competition is set to kick off this Friday, October 9, at 11 pm ET and will continue through to 11 pm ET on October 10. Plus, only US players will be able to participate.

Large cash giveaways of this nature aren’t unprecedented in mobile gaming, and we’ve even seen other influencers, such as Mr Beast, run similar competitions with games like Finger on the App.

And while Press Play Slots is indeed a slots game, it aims to do things a little differently. “We are flipping the script on traditional, hyper casual games,” Press Play Slots’ unnamed founder told Forbes. “We don’t ask for any money from our users ever and there are no in-app purchases. Further, we pay people real money.”

The app has shot right to second place on the US App Store’s Casino charts, and it seems highly likely that downloads will continue to skyrocket as the competition grows closer. If you want to get involved, you’ll find Press Play Slots up for download now from the App Store.