The elevator pitch for Road 96 is a weird, but intriguing one: a procedurally generated road trip through the fictional country of Petria in the ‘90s, where you play as a teen trying to cross the border. With thousands of possible roads and a colourful cast of characters to interact with, no two trips are the same. It’s an ambitious concept, and one that, somehow, the game does a fairly great job of delivering on.

Inspired by directors like Tarantino and The Coen Brothers, Road 96 is a narrative-heavy game where the characters and dialogue are the shining stars. Your mute protagonist interacts with others, and your choices impact the world and change the outcome of your story.

You begin from one of many possible starting points, thousands of miles away from the border of Petria that every character wants to cross. You interact with the game’s many characters, locations, and scenarios to further this cause, convincing people to give you lifts, exploring different areas, and observing a fair few memorable moments.

The most intriguing thing is, most of the time it doesn’t take too long to get to the border and, hopefully, cross it. Probably only a few hours, less if you rush. Choosing to continue sends you right back to the start, but from a vastly different point thousands of miles from the border. You have to start all over again, but you bump into some familiar faces along the way. 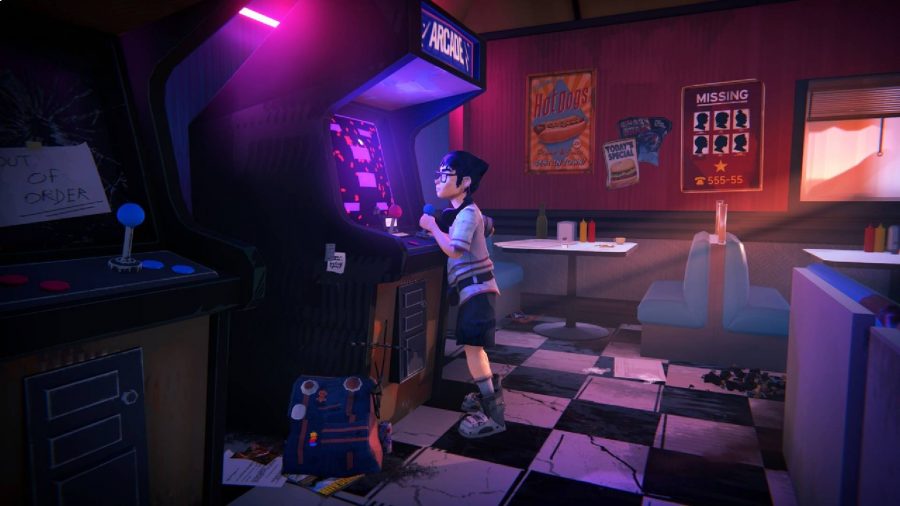 Yet, while your characters restart, the timeline does not, and often you find the consequences of your previous actions spill out into the next run, where your new character can now interact with the world. While not everything you do has an impact, each run contains plenty of impactful moments that have far-reaching consequences in both this playthrough, and the next. It’s fascinating to see the outcome of different choices but from the other side of the country, or to see exactly how certain characters react.

Crucially, there are also rewards for returning to Petria and collectable items to discover. You can find boosts in subsequent playthroughs that give you an advantage in things like lockpicking, your social skills, and even the odds in dice rolls, which determine the outcome of several chance-based encounters. While there are plenty of different areas to explore and discover, the added value of additional skills means that when you rediscover familiar stomping grounds, you’ve got new tools to explore every single room and possibility. 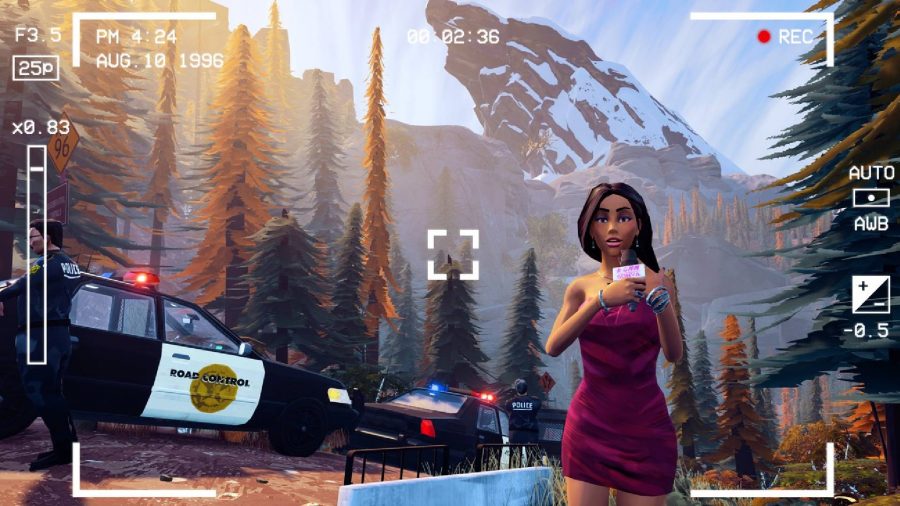 I found myself happy to return to locations to find familiar faces. The characters in Road 96 are well written, with some great voice acting, and they each have very well explained and executed motivations. The political landscape of this fictional country is particularly tumultuous when you’re exploring, and you get to witness and influence some really interesting events, as well as dive into the past of many of the characters you encounter. It’s all presented in a convincing enough way that it felt like I was diving back into another episode of television each time, just hoping to catch another glimpse of what Zoe is up to, or why John was found drunk and confused in the wilderness.

While Petria is fictional, there’s a deep American influence in every aspect of Road 96. The muted blue and teal colour palette brings to mind the work of the Coen Brothers, as well as the slice of life locations brought vividly to life, like backcountry diners and trailer parks in the middle of nowhere. Also, most of the events of the game lead up to a pivotal election, and most of the characters’ motivations revolve around this too. It’s a great way to bring out the more emotional side of the mature characters, but the younger ones are also caught up in the wider machinations, often left behind or forgotten by the many desperate adults driving for change. 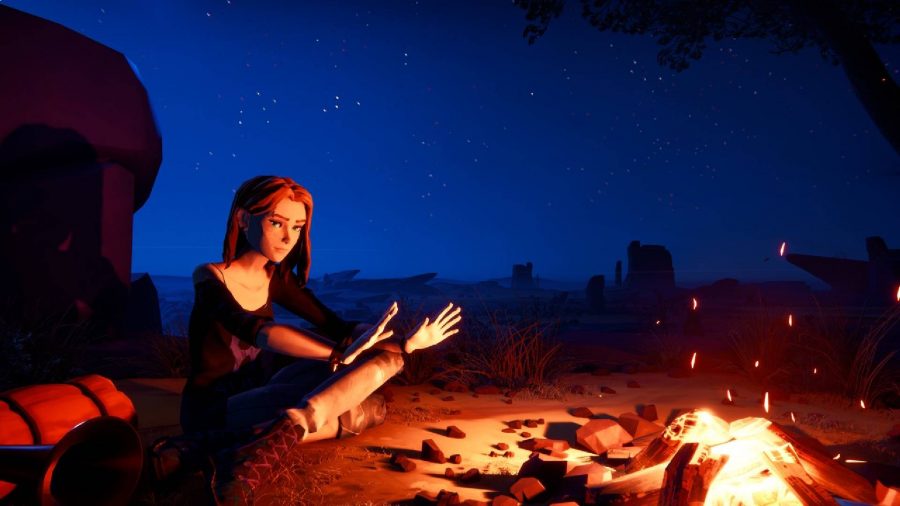 Functionally, the game feels right at home here, with the episodic approach perfect for the handheld nature of the Switch and the stylized cel-shaded art-style making the jump without too many sacrifices. Handheld mode knocks the resolution down quite a bit, and the action can occasionally be a little too dark, but for the most part, everything is legible. My main gripe is with the controls.

Moving through locations, turning, and sprinting are all absolutely fine on a controller, but this game is hinged around dialogue boxes and choices. I was often trapped in first-person mode with characters talking from different angles around you There were several occasions where I didn’t even realise a character was waiting for a reaction because I wasn’t looking in the right direction. All the dialogue boxes are locked in front of the person speaking, and are also quite small. This is adjustable in the menu, as well as the size of text, but even bumping these up didn’t fully fix how clumsy the translation of mouse controls is here.

I would much prefer for text boxes to appear on the bottom of the screen, while I can still use the sticks to move around and interact with the characters. Perhaps making choices could be assigned to unused buttons like the L triggers, I found it frustrating and unnecessarily clumsy to navigate the UI, and having to hover the cursor over dialogue choices when just trying to interact with the story. It’s not awful, but it particularly stuck out in moments when your character is surrounded by different people, and you’re expected to flit between conversations and dialogue choices by constantly moving the analog sticks. Similarly, here’s where motion controls would feel great, but they’re sadly missing. There were a couple of times when the finicky nature of moving the cursor with the analog stick meant I struggled to make choices, but again, this is nitpicking. 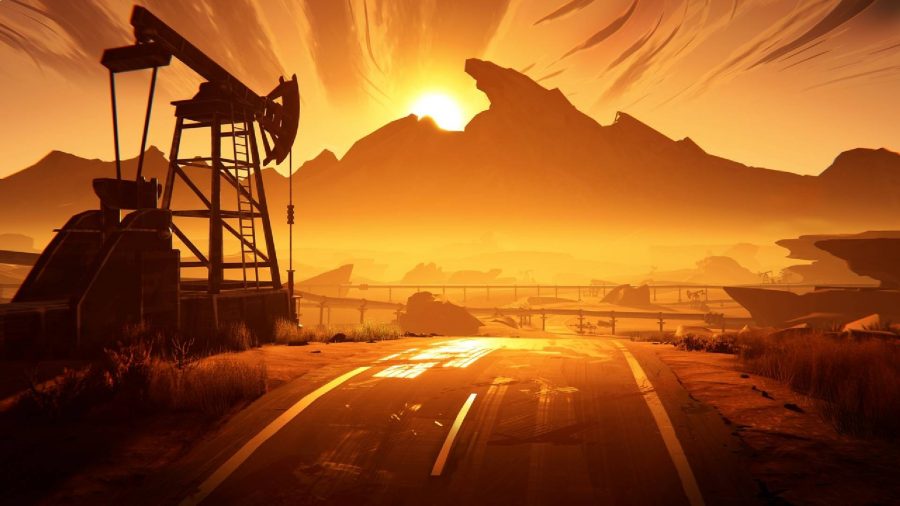 One thing that really stands out from my experience, is the incredible effort put into both the general audio design, and the soundtrack. This is a very cinematic experience, and the developers have gone overboard to ensure it feels like one. From the aforementioned fantastic voice acting, helping to fully realise each of the game’s characters, to a truly wonderful soundtrack that really demonstrates the road trip feel of the title. The collectables are also cassette tapes hidden around the country, so the more you explore, the more incredible music you find. While Petria is fictional, it’s set within the 90s, and the music does a fantastic job of realising this, while still working towards its own individual personality.

Ultimately, Road 96 is an ambitious game that somehow manages to deliver on its promise with a wide-reaching and evocative tale, brilliantly told from many different angles. Both the fantastic characters and the unlockable abilities mean that I always wanted to dive back in for another adventure. I just wish the actual gameplay was slightly refined, as the clumsy UI occasionally got in the way of the storytelling, but it never ruined my experience.

Road 96 is a fantastic coming-of-age and socio-political tale, told in an interesting way that only video games can deliver. Stick your thumb out and hitch a ride with this fantastic adventure, and make sure to turn the music up loud.