Storytelling games have found quite the home on mobile devices. Beyond the deep well of generic choose-your-own adventure games you have a lot of options; like the mobile versions of well-regarded gamebooks like the Fighting Fantasy series. Other developers have transformed those books with elaborate new digital mechanics a-la the Sorcery! series.

Then there’s the return of classic adventures like King of Dragon Pass and its sequel Six Ages, fresh takes on the genre like 80 Days and Over the Alps, and cool made-for-mobile experiences like Reigns. With that cornucopia of interactive adventures, it’s hard to whole-heartedly recommend Silmaris.

Silmaris is a game made up of two fairly distinct parts. Firstly, you have various procedurally-generated segments of story that present you with challenging choices with no clear ‘right’ answer. Here, you determine whether your king is a conqueror or negotiator, or something else entirely.

Then you have a dice game of resource management where you try to accumulate and hold on to the weapons, grain, spies, etc, that you need to accomplish your goals. You can do a lot with those dice, including invading other nations, building treaties, establishing smuggling routes, slaying monsters, and developing your own city.

The game’s central mechanic is simply opposed dice rolls. Dice (six-sided, but with only two different faces) are accumulated to represent military strength, diplomatic clout, accumulated grain, and so on, with five different colors of resources in total. Each one allows you to take different actions in the world: conquer cities, establish treaties, go on adventures, etc. If that’s your jam, we’ve put together a list of the best digital board games on mobile, so you can find a few more to play.

Anyway, you choose how many dice you want to spend and roll them against your opponent. A sixth resource lets you reroll when you fail. The game helpfully points out the odds of each roll as you commit more dice to it, so you get a good idea of what your chances are. On the other hand, failure can come quite suddenly: run out of rerolls on an invasion of your capital city and you’re out of the game. 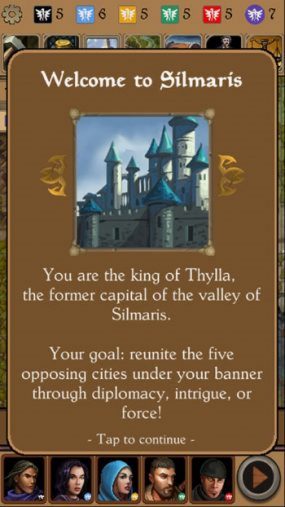 Between the do-or-die moments, when your dice are helping you accomplish something, you’re pretty much just deciding how to best accumulate dice so that you have the right ones when you need them. Accumulating dice using your strongest adviser is generally your best option – so much so that the quick roll option on the home screen just makes all five of those rolls for you.

If you’re low on a certain type, however, you may need to make suboptimal rolls or trade dice between pools. This especially happens when you are under attack from the other kings and you desperately need all hands on deck to recruit enough soldiers that you can fight another day.

Your choices in the resource management game come down to maximising your pools and available rerolls. Is it better to hold on to your reroll tokens, or spend them on a more expensive adviser that will give you a permanent one or two dice bonus? Can you afford to go after an artefact, or do you need your army at home? Will you pull in more dice by conquering or allying with another state? 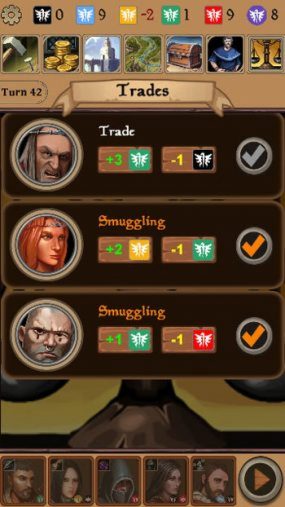 The dice game takes a fair amount of management, but it’s so abstract it can feel more like busywork than really commanding a giant army or managing an elaborate spy network; each of which are resolved with identical opposed rolls. Since much of the fun of the game is based on choose-your-own-adventure storylines, it’s fine for the resource management side to be less detailed. In a game like Reigns, you have just four resources that react exclusively to choices made in the story, and the game milks a lot of tension out of that balance.

In Silmaris, however, you spend a lot of time between sections of text watching rows of dice spin and moving different colors of dice into different pools. The dice management game would probably benefit from moving more in one of two directions. It could either become more simplified and abstract by eliminating some dice pools and reducing the number of rolls that come in between pages of the story. Or it could become more detailed and thematic, adding, for instance, various military units, buildings, and a more complex economy.

But that’s only half of the game, and the meat of why you would want to play Silmaris lies in the story sections. These bits of fantasy are well-written and include some really nice and evocative art. A lot of the story bits play out over multiple turns and they can be influenced by the state of the board as well. Angering another power in the story mode doesn’t just result in penalties there, but may make dice rolls against them more difficult. 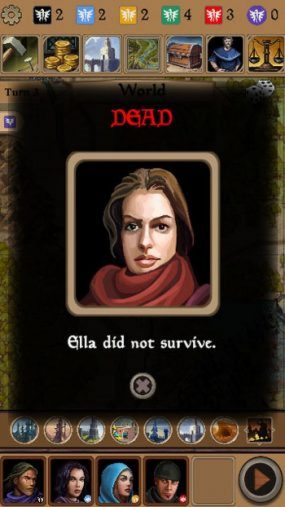 Unlike King of Dragon Pass, Silmaris’s fantasy world is fairly straightforward stuff in the Tolkein/Dungeons & Dragons mold. The consequences for your actions can be surprising, but they are never mystifying like in Dragon Pass. There are no weird cults or warrior duck tribes, no fantastic rituals or inscrutable offerings. The style is also more straight-faced than Reigns, which had dark, weird humor and stronger characterisations for its advisers. Silmaris’s story is compelling enough, but not as surprising as games that have come before.

Ultimately, though, the two sections of the game don’t mesh very well. The story does have an impact on the dice rolling, but it’s hard to say how much. It definitely sets up problems that need to be solved with dice, and will often reward you with one of the key re-roll tokens as a prize. More often, though, you’ll win only one or a handful of dice of a certain color; the same thing you get just for going through the standard rolls every turn. It makes the story decisions seem a bit weightless.

Silmaris is a pretty interesting lightweight kingdom simulator with some fun storylines. It should take quite some time to dig through all the written content of the game, and once you get the hang of it, the dice part becomes less tedious. There are better options for story games on mobile (many of which sit on our best mobile RPGs list), but you could also do much worse.

An ambitious, narrative-driven kingdom management game that doesn't quite manage to pull its two distinct halves together as well as we'd like.