There’s been a slew of Wii remasters and rereleases on Switch recently, and now Sonic has joined in the fun with a remaster of the Wii exclusive Sonic Colours, just in time to celebrate Sonic’s 25 anniversary. This hybrid 3D/2D entry is looked upon as a high point of the series over the last decade, so has enough been done to warrant another purchase, and has SEGA managed to recapture what made it great to begin with?

Sonic Colours sends Sonic into space much like Mario did a few years prior with Super Mario Galaxy, as Dr Eggman has set up a galactic theme park and invited Sonic and Tails to join. Though clearly there are nefarious purposes behind the scenes. Sonic soon discovers that Eggman has actually been harvesting alien creatures called Wisps, and is using their powers to create weapons.

Sonic must work to liberate the Wisps, and can actually use their powers to transform into a variety of useful new abilities that will help him explore each level. There are even some powers only unlocked later, so you can often find secrets and alternative routes when you return to earlier levels with access to some of the later powers. It’s a neat way to add longevity to the game, as finding all the collectibles will require you to return when you have more powers unlocked.

One issue off the bat though, is that the variety of Wisps is great, but they feel thinly and bluntly implemented. Getting a Wisp is usually just the key to advancing through the next few seconds of a level, instead of a chance to experiment with movement and attacks. This is further exemplified by the fact each Wisp operates on a timer, so you only have the ability for a few seconds at most. They’re fun distractions, and Sonic controls differently with each one, but they often feel like quick puzzles to be solved rather than a fun exploration of movement and combat. 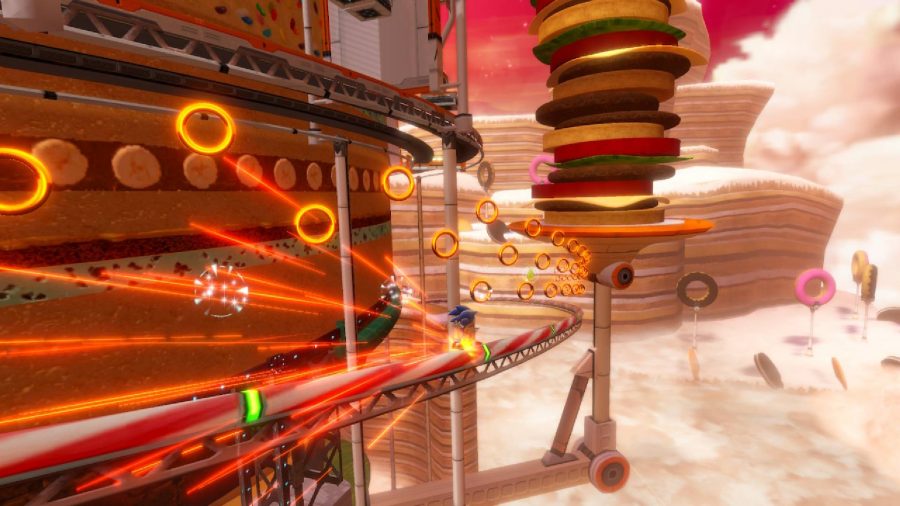 There are collectibles in each level that sometimes necessitate the use of certain Wisps, and this is a nice way to actually use them, but it’s both used a little too sparingly and also never feels very satisfying to control. While this is definitely one of the better 3D sonics, this entry uses the boost button instead of Sonic rolling into a ball, sadly, this translates to a slightly stilted and unnatural feeling when in 2D segments. In a post-Sonic Mania world, it feels especially jarring not being to roll Sonic into a ball, and the physics for the blue hedgehog somehow feel a little too floaty and imprecise.

When Sonic is at his best in Colours, is in the 3D/2D hybrid levels, specifically ones with wider levels begging to be sped across. Dynamic camera movement, great backgrounds, and some thrilling chase segments make this feel like one of the most energetic entries in the series, and it works well. Fittingly given the fairground setting, the best moments are when the game feels like an interactive rollercoaster. You still have to press Y to crouch under approaching platforms, press B to use homing attacks and chain your movements to reach new heights, and the classic formula of jumping sideways and grinding on different rails all work well here especially with the amusement park vibe. 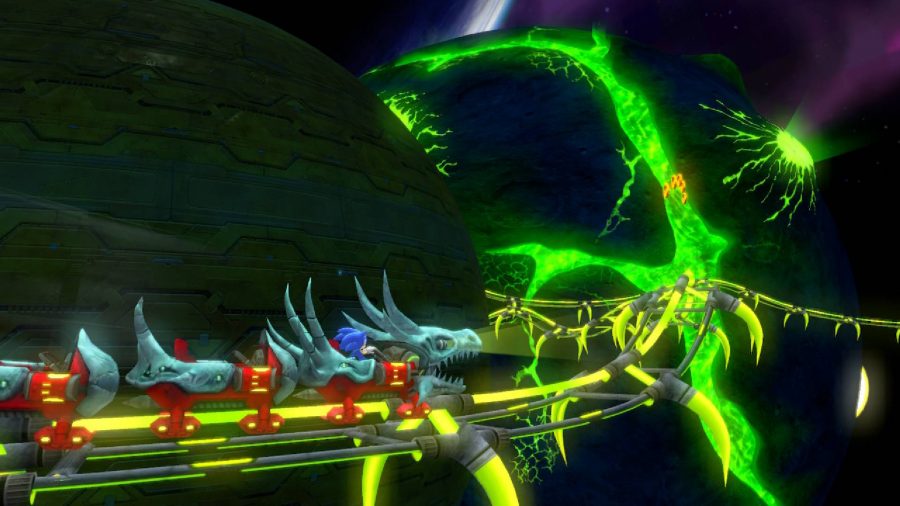 There’s even a nice amount of variety in both visuals and music in this entry, with the different planets offering some nice changes of pace between levels, and the soundtrack often doing everything it can to both meet the bombastic standard of a Sonic level, but also create a different personality for each area. However, while some of the original soundtrack returns in all its glory, the remixed songs are somewhat of a mixed bag. Whether through simple rearrangement or rerecording, several of the songs seem to have lost the weight behind them, being turned into toothless elevator music version of the originals, or often changing the instrumentation and melody in obtrusively weird ways.

Similarly, the changes to visuals seem to be for the sake of change, instead of improvement. This title was gorgeous on the original Wii hardware, but outside of Sonic’s model, there doesn’t seem to be any positive improvements. The Switch version struggles to maintain even 30 FPS, while graphical glitches and slowdown were a constant occurrence. Most of the visual changes seem to simply be increasing the brightness or bloom on light sources, meaning this technicolour rollercoaster is now eye-searingly neon in some levels. 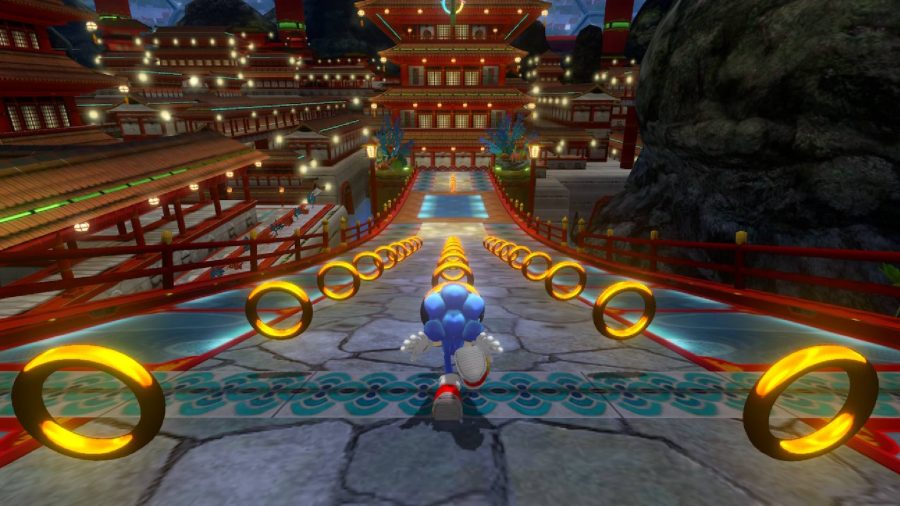 Cutscenes have also been upscaled, but while the opening segment feels brand new, the original cutscenes look like Wii footage blown up. My guess is, it would have been too expensive to redo everything, but the drop in quality is slightly jarring. I do, however, still adore the Saturday morning cartoon vibe that this entry particularly nails. Sonic and Eggman’s banter is at its silliest, with bad jokes almost every minute.

In my playthrough, I didn’t experience any major glitches or technical problems, but I still wouldn’t say that this game is running perfectly. Considering the quality of recent Wii ports on Switch, whether running through proprietary emulators or not, the fact a decade-old game runs considerably worse on much more powerful hardware, suggests that maybe some things would have been better left unchanged.

[this game] showcases Sonic at it’s most joyous and ridiculous

Despite not experiencing any major glitches, I did encounter minor graphical glitches, such as certain effects not triggering, some noises not playing, and sometimes effects happening in the wrong place. This port feels like it’s held together with tape, and while I hold out hope that updates can smooth the experience, releasing in this state is pretty disappointing, especially when it seems to have only hampered what was an otherwise smooth original experience. This is a short game, unless you want to tackle speed runs and unlock everything, and I struggle to justify the price point to anybody even mildly interested in revisiting this game in the present day.

There are good additions, however, with fresh collectibles being found in each level that can be used to purchase cosmetic items for Sonic. I can’t pretend it thrilled me to unlock simple yellow, orange, or green gloves to play with, but it at least gave me something to do, and merits replaying levels. Some of the cosmetics can be great though, with the boost trails and more expensive patterns actually being fairly neat, but there weren’t nearly enough impressive things to unlock. 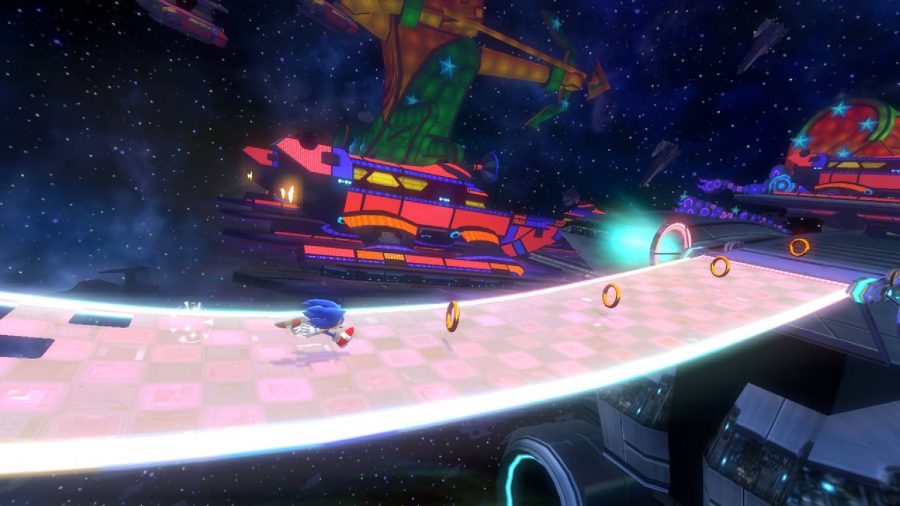 A fun new addition is Rival Race, in this new mode, you replay levels, trying to beat Metal Sonic to the finish, reminiscent of Ghost Modes in Mario games. This is a neat touch, and it’s nice to see Sonic games actually nudging people towards speedrunning or at the very least, replaying levels to understand them better. The Sonic experience is always improved when you know the levels well enough to improve and iterate on your times.

Minor improvements also include the new Tails Save, which replaces lives. This feature gives you the chance to restart at the nearest safe place, instead of a checkpoint. Then there’s the Jade Ghost, a new Wisp that lets you break the levels and phase through solid structures to find new areas. This feels like a bit of an afterthought, as while it’s helpful, the levels have only been changed slightly to accommodate this. You’ll spend more time bumping into invisible walls and barriers than you’d like, or simply wandering into the abyss of space.

One thing I do need to mention though, is that Sonic Colours was a good Sonic game to begin with. It’s a well designed Sonic game with some really memorable levels and set pieces, it also has some of the best music in the series, and showcases Sonic at its most joyous and ridiculous. It cuts back on the needless fluff of some other entries, and instead puts effort into adding to Sonic’s catalogue of moves and transformations in some really fun and interesting ways. It really does feel like it’s copying Super Mario Galaxy with a lot of these (the drill power is especially familiar), but if you’re going to steal from anyone, steal from the best.

Sonic Colours Ultimate is a wonky remaster of a solid game, so it’s tough to recommend for anyone who owns and loves the original. This is a convenient way to play the title though, and any Sonic fan who hasn’t already played it will find one of the most earnestly fun entries to the series in years. Graphical improvements and music choices leave a lot to be desired, so purists will find plenty to nitpick if they know what to look for.

I’d say there’s a great Sonic game here, and newcomers will find plenty to love. But if you own it already, maybe wait for a sale.