RIP Lovecraft, you would have loved Bloodborne. It seems we can’t throw a stone these days without hitting a Lovecraft inspired video game, and I’m all for it. The prolific sci-fi writer was fantastic at describing the sorts of writhing and wriggling tendrils of evil creatures that would scar any man if they glimpsed them for a single moment (he was also really racist though so keep that in mind).

Luckily, his views aside, his creative output is perfect for video games, and Source of Madness looks to be bringing new things to the table as well. As a side-scrolling rogue-like, Source of Madness stands out by creating procedurally generated enemies that are never the same. Made of chunks of flesh and twirling tentacles, these monstrosities are truly stomach-churning.

Not only that, but Source of Madness also uses a unique machine-learning algorithm that means these creatures learn how you play, and adapt to it. This is a brutal and profoundly disgusting world already, littered with religious acolytes telling tales of the end of days, but your journey through is also not a simple one.

With a painterly art style almost reminiscent of GRIS, Source of Madness has a unique visual flair that ties in this illustrative look quite well with the style of Lovecraft’s work. Each run sees you set out through a huge cathedral before entering a portal into the hellscape, and surviving as long as you can. Once the beings finally kill you, another character takes their place. You’re presented with a choice of a few classes, each with different stats, and as you advance the differences get progressively starker. 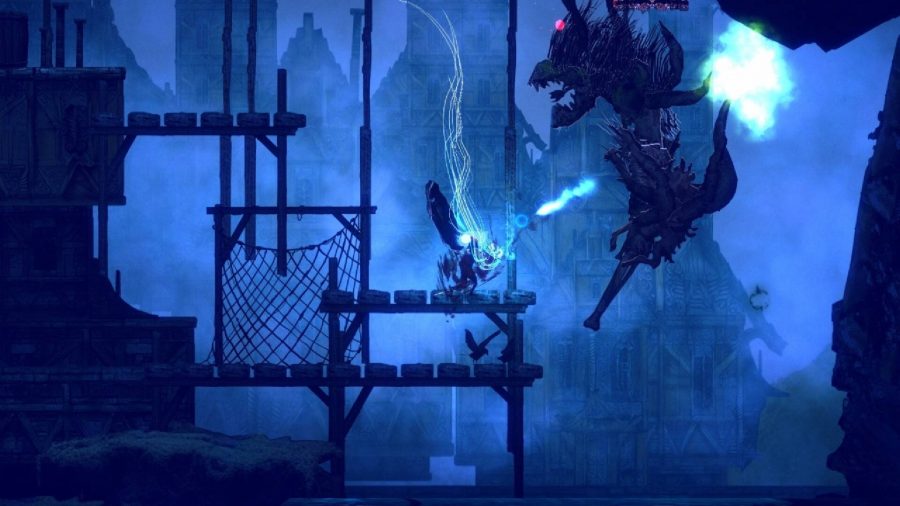 Your character has a floaty feel to them somewhere between Rayman and Sackboy, and at the beginning, you utilise mostly ranged magic attacks until you find more equipment. As you explore the depths of these dungeons, occasionally enemies and mini-bosses drop equipment, that when worn changes your stats and can unlock new spell-based attacks. There’s a nice library of moves to discover, lightning, fire, and a variety of different styles of attack and ranges of power, but they do still ultimately feel very similar in the first few hours.

Soon, you’ll have enough coins and currency to start unlocking new abilities and upgrades on the skill tree back at the starting cathedral, as well as new classes that expand your move pool. This is where you eventually find some interesting new ways to combat the many atrocities in Source of Madness, but it comes just a little too late and meant the opening hours were somewhat gruelling for me. 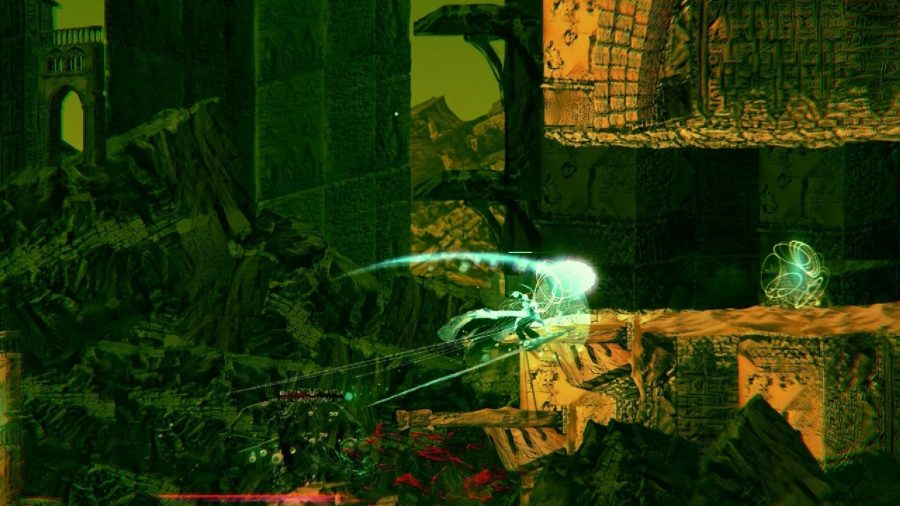 Of course, this game is meant to be difficult. With such a unique focus on enemy design and attack patterns, there’s no doubt in my mind the developer wants people to struggle to get through this world. But, this always has to be balanced with satisfaction or intrigue. Bloodborne might kick your ass, but it feels incredible to control from the first few seconds. Hollow Knight has a really tough few opening hours, but the hints at the mysteries of Deepnest, as well as the dialogue from the characters, made me want to explore further.

The biggest problem I have with Source of Madness is one that many rogue-likes struggle with, and that’s keeping the game entertaining when replaying the same levels. While having uniquely evolving and changing enemies is a brilliant way to combat this, they seem to just shift between one mound of disgusting limbs to the next. Plus, the attacks are certainly sporadic, but the enemies are too large and cumbersome to truly feel like they ever present any sort of tactics. 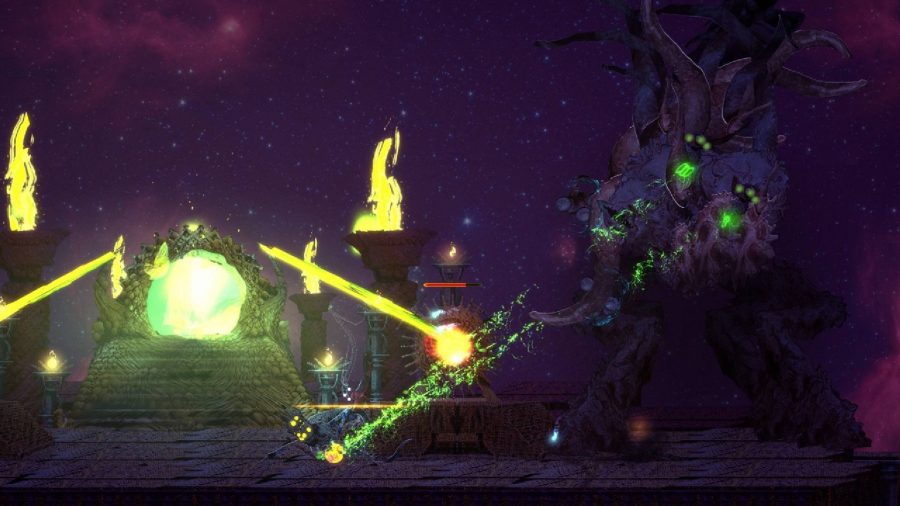 I enjoy the different foes being these lumbering collections of limbs and tentacles that moan with cosmic horror, but ultimately, the actual attack patterns are quite boring. Meanwhile, in other games you steadily improve your skills against one enemy’s attack pattern, here, I just spam magic because I never know what it’s going to do next. These enemies aren’t teaching me anything, and the shifting goalposts just annoy me when I start again.

The adoration for Lovecraft is certainly here

If you are a huge Lovecraft fan, you may enjoy the little hints at the story dotted around and the clues towards a grand narrative. Occasional cut scenes show dark towers swirling with black mass and NPCs speak of the depths of horror this world inhabits. Outside of your base cathedral, you won’t find much more, it’s well written, though it can feel a little aimless. The adoration for Lovecraft is certainly here, but I feel there wasn’t much push to do anything interesting or new with that style. 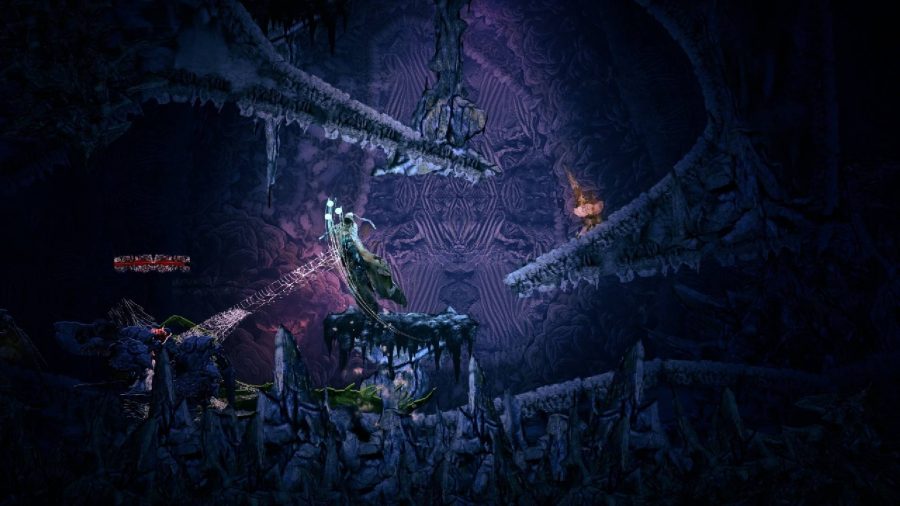 I love the ideas behind Source of Madness, but ultimately I don’t think they actually work well enough to give players something fun to do. Earning different spells and interesting classes takes way too long, the enemies (outside of the bosses, who you won’t see often anyway) and just generic blobs waiting to be bashed, and while the world really dives into the cosmic horror theme, it still manages to not quite be visually interesting enough.

Finally, I’m also disappointed to see that performance on Switch absolutely nosedives whenever a few enemies are on screen. Everything runs fairly well in the opening cathedral and the first segments, but eventually, you have a handful of those Lovecraftian monstrosities hurling their writhing limbs at you, and the game simply cannot deal with it. Firing spells becomes a guessing game, and the framerate must dip into single digits at points, it’s abysmal. 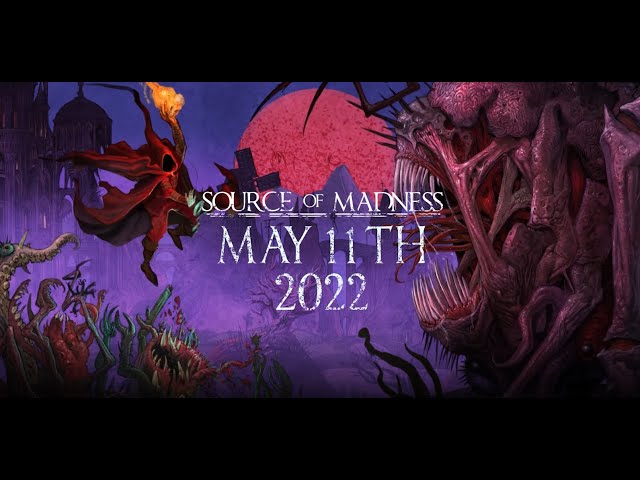 A brutal love letter to Lovecraft and a roguelike with some neat ideas, Source of Madness could hold some fun for someone obsessed with the sci-fi author and looking for a particularly punishing game. But the tedious combat, slow progression, and the poor Switch performance all drag my experience down. Maybe wait for a sale and a couple of updates.

Despite some nice ideas and a classic roguelike framework, Source of Madness on Switch just isn’t fun enough to recommend. Here’s hoping some updates down the road can change that.