SpongeBob: Krusty Cook-off is like a meal in a restaurant that really wants to be fancy. You look at the plate, admiring the beauty of the individual ingredients, and how they blend together. You dive in for a taste and disappointment immediately sets in: the level of care that went into the visuals of the feast doesn’t translate to the flavour. You’ve been duped.

Boot up Krusty Cook-off for the first time and you get a similar feeling. The music is reminiscent of your childhood, and visually it looks exactly like, if not even better than, the cartoon of your youth. The writing is on-point, with gags aplenty that make you grin like you were a kid again. But then you boot up a level, expecting to have a bunch of fun flipping patties and selling them to underwater sea folk, but the reality is nothing short of disappointment.

There’s just not an awful lot of game to SpongeBob: Krusty Cook-off, with the entire Cooking Fever experience, which this game draws its inspiration from, streamlined into the barest of bones.

Much like in Cooking Fever, your goal is to serve up meals to hungry customers. You stand behind the counter, taking orders and preparing food. Once it’s cooked and good to go, you dish it out to the customer who pays you and leaves. Once you’ve served up enough customers, and completed a level’s objectives, you receive your earnings and move on. You can spend those earnings on a bunch of different restaurant upgrades.

Sure, you can say this about a lot of mobile games, but this is literally just tapping. Tap to cook, tap to mix ingredients, tap to serve, and tap to trash food. We appreciate that developer Nukebox Studios is likely aiming Krusty Cook-off at a slightly younger audience (than a tired old mobile games editor), but we’re pretty sure kids are capable of much more than this.

Small touches could make it instantly more engaging. Given that the touchscreen is one of the most tactile of control schemes, it’s disappointing to see a lack of creativity. Why can’t we drag ingredients onto the grill to cook them? Or squirt the jelly on pancakes ourselves? The challenge is just so lacking here that we can’t even see the youngest of kids getting a kick out of it. 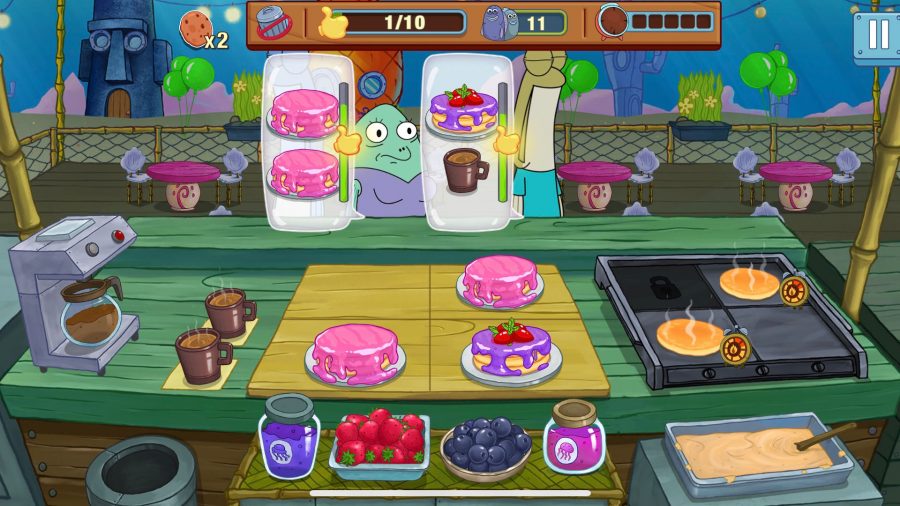 There’s not a huge amount of variety between each level either. You have objectives to complete, like ensuring no customers leave, not burning food, or serving a specific number of customers, but they all play the same. It’s very unlikely that you’ll ever actually lose a level unless you just forget you were playing. It could happen.

Who works in a restaurant down under the sea?

SpongeBob Squarepants! That's who. But he's not the only one; here are just a few of the characters that join him on his culinary journey.

Therein lies the only real challenge in Krusty Cook-off: keeping customers happy so they tip high. This is no mean feat, given how impatient sea creatures are apparently. Once they’ve ordered, a green bar will start ticking slowly down, reaching yellow, and then red, which signifies the level of patience. Let this drop down to the bottom, and the customer will leave in disgust. 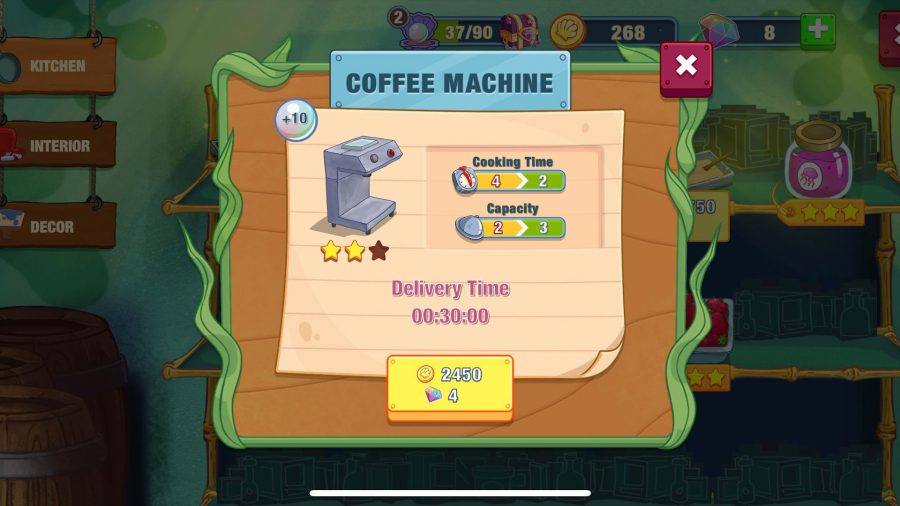 You can mitigate this by dishing out a cookie, but these are incredibly rare, and you only earn a handful several times per day. You can upgrade the amount you earn each time a batch is baked, but this costs gems, the premium currency. While Krusty Cook-off isn’t a particularly greedy game, the microtransactions are expensive enough to make you question whether your purchases are truly worth it.

Upgrades, for example, cost a combination of coins, which you earn by playing, and gems, the premium currency. You can purchase this outright, or earn small numbers for free by completing achievements and opening chests. You earn chests fairly often by playing, and we haven’t had to purchase additional gems to buy restaurant upgrades so far.

You can, of course, spend gems on new cosmetics via a gacha system. This lets you dress up playable characters SpongeBob, Patrick, and Squidward in a variety of different outfits. These are entirely cosmetic though, with no gameplay advantages whatsoever. Besides, you can earn an item for free once per day if you’re happy to be patient. 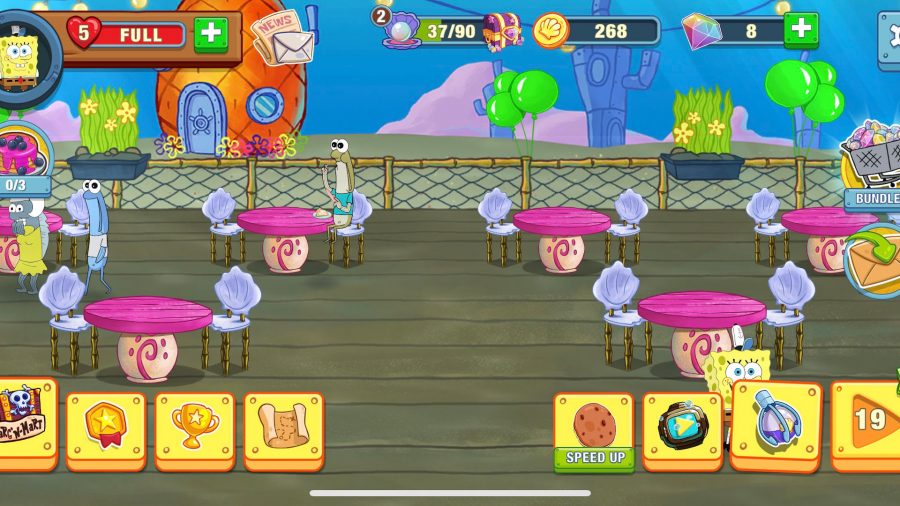 Overall, we found SpongeBob: Krusty Cook-off a bit of a mixed bag. Visually, it’s first-rate, looking even better than the actual cartoon series we remember as a kid. The writing, as rare as it may be, is also pretty funny, providing us with a chuckle here and there. What lets it down is the gameplay, which just isn’t very engaging. It streamlines the likes of Cooking Fever to such an extent that there’s nothing much left. It may well be that this was deliberate, as it’s clearly aimed at a younger audience, but we’d argue that it’s oversimplified even for the youngest of children.

You can grab SpongeBob: Krusty Cook-off on iOS or Android via the App Store or Google Play respectively.

SpongeBob: Krusty Cook-off looks fantastic, but even the presentation can't distract from a lack of genuine gameplay