SpongeBob SquarePants: Battle for Bikini Bottom – Rehydrated has a very long title. Look at all of those letters. You probably don’t even have the time to count them. Imagine all the anagrams there, waiting to be discovered. Now, it might seem strange to talk about a game’s name in the first paragraph of a review, but I thought it was important to get the plus points of this reheated 3D adventure out of the way early. Downloading the game from the App Store was smooth and easy too.

SBSP:BFBB-R is a polished and preened remake of a game that came out about 20 years ago. It stars SpongeBob, Patrick, and the rest of the gang and tells a story about invading robots, giant jellyfish and golden spatulas. You wander around reasonably-large-for-the-time areas, smashing things, collecting other things and jumping around.

In this mobile version you control everything with a pile of on-screen buttons. They’re clustered around, some popping up in certain situations, others refusing to budge even when you need them to. Sometimes you’ll press them and they won’t work, and then you’ll die. Everything in the control department rolls around in the frustratingly inconsistent muck.

You’d think a game featuring SpongeBob would be overflowing with joy and glee, but the main feelings that emanate from Battle for Bikini Bottom are apathy and dissatisfaction. From the very start you’ll wonder why you’re bothering, and that question will grow, unstoppable, until you finally give up.

The main feelings that emanate are apathy and dissatisfaction

Because you’ll want to try and like this one. You’ll want the bright, pretty good-looking graphics to wash over you and make your heart feel as light as it did when you were a child. But nostalgia can only get you so far, and with Battle for Bikini Bottom that’s about two hours in.

Examples of annoyance include, but are no means limited to: enemies at checkpoints that hit you when you respawn, a fidgety camera that gets lost behind scenery, a lack of any sense of progression, sudden spikes in difficulty, sections where you’ve got almost no idea where you’re supposed to be going, and an overwhelming sense that you could be doing something – or anything – more interesting. 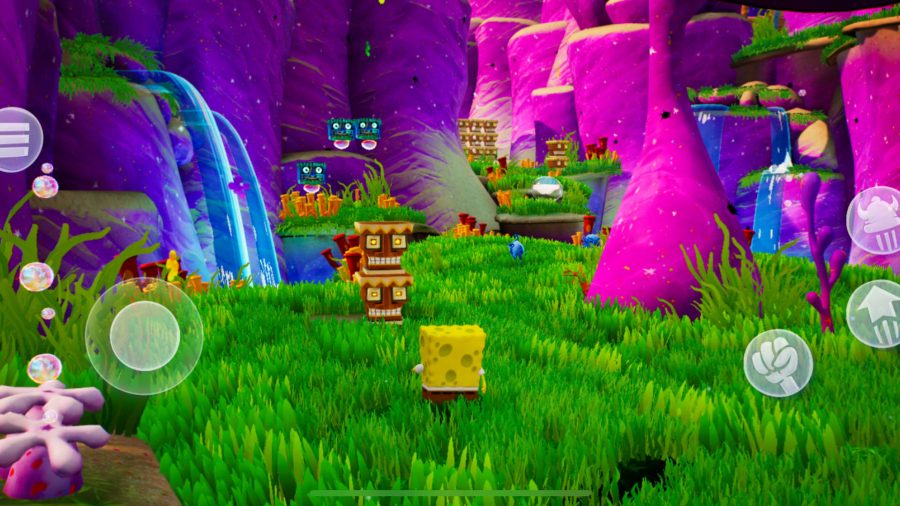 Battle for Bikini Bottom is old-fashioned, not in a rose-tinted way but in a ‘things have gotten much better’ sort of a way. Like it or not, we live in more sophisticated, discerning times, where the incremental growth of gaming has irrevocably altered our expectations. Much as we might want it, there’s no going back now.

SpongeBob SquarePants: Battle for Bikini Bottom – Rehydrated isn’t broken, its DNA is just fundamentally flawed. Everything works, pretty much, but the level design, character progression, and central concepts are lodged in the primordial soup of gaming’s past. It’s an amoeba in a world that expects, nay demands, multiple-celled organisms.

SpongeBob SquarePants: Battle for Bikini Bottom - Rehydrated is a blast from the past, like standing on some unexploded ordnance, or the interest that accrues on an unpaid parking ticket