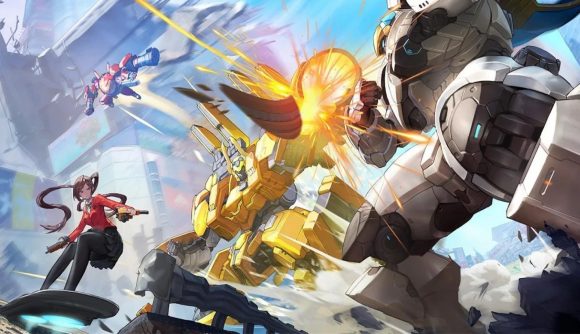 NetEase has announced a crossover event between robot battle game, Super Mecha Champions, and the popular anime series, Granbelm. The event will last four weeks, giving you a chance to test your mettle – literally – in a new game mode; mangetsu battle. You will also get the chance to play as Mangetsu and Shingetsu from Granbelm, and even pilot some mechas taken right out of the show. The most significant of these are the powerful, yet subtly-named, cat mech; Viola Katze.

For any unfamiliar with the show, it’s based in a world where magical girls pilot giant robots called Armanox, fighting them in the Granbelm tournament to earn the title of Princeps Mage – basically the person who gets all the magic. As with most anime, there’s a lot of detail, but the show fits perfectly with Super Mecha Champions, as both feature giant Japanese robots clobbering the daylights out of each other.

For the mangetsu battle mode, the decor of Mecha City has been revamped with a new full moon aesthetic, and features will pop up around the map, such as a portal which randomly transports you to either great riches, or some angry fellow robots.

All of these details and more are shown off in the crossover event’s trailer:

A smattering of Rune Fragments are also scattered around for collection, allowing you to unlock an amulet granting special skills, reduced cooldown, and protection shields.

It warms the heart when two beloved IPs bond over their mutual love, and something which can give us all hope in this fractured time; giant robots destroying stuff.

If you’re a fan of Granblem, a fan of mech games, or just want to give a whirl in a mean machine, you can find Super Mecha Champions on Google Play, and the App Store.