The main crux of Monkey Ball is that you have to get your loveable little ape to the finish line through a series of ridiculous levels that border on animal abuse. But, you don’t control the monkey, you control the level. These poor monkeys go to hell and back, over various obstacles, hurtling at high speed, balancing on seesaws, and so much more. Often the most obvious way isn’t even the quickest way, as with a few devious skills and some brass monkey balls, there are often shortcuts to be found for the bold.

It’s an addictive formula, constantly pushing the “one more go” feeling, and snaps back to the start of a level in an instant. Deaths are rarely unfair, and though controlling a level instead of your character is jarring, it still feels within your control at all times.

There are a few softballs at the start, but it’s not long before the game ratchets up the difficulty, and these poor monkeys pay the price. The levels become labyrinths, and you really need to master your monkey tactics to get to the end of each. Thankfully, you can choose to either skip levels, or pay in-game currency to complete them, and carry on through the regular story mode. This doesn’t truly complete the level on the menu, but it does allow you to carry on, a neat quality of life improvement I appreciate after attempting some levels over twenty-something times. 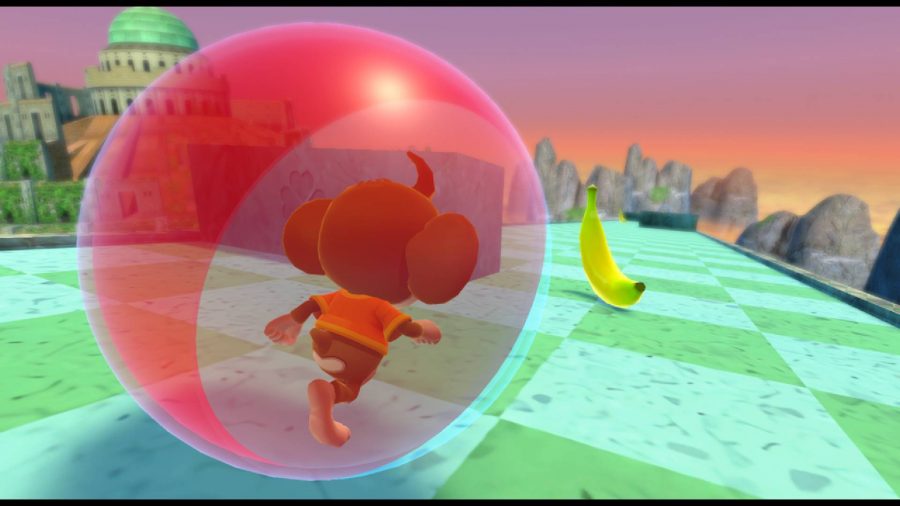 And truly, you will get stuck in some of these levels. Super Monkey Ball Banana Mania may only cover levels from previous games, but there are some really tough ones here, and the different stage hazards can make the odd level seem impossible for a while. However, this didn’t hamper my fun. Though there’s the odd really frustrating roadblock, being able to skip and return to levels is a real blessing for my own patience and time. You can also choose to make levels a touch easier, or sometimes make hazards move slower, so there are plenty of ways to make levels actually achievable for younger players.

Each level is also full of bananas for you to collect, often in a pattern meant to guide you through the level. This collectable resource does much more than just give out some potassium. Not only can you use bananas to ‘complete’ levels if you get stuck, but you can also spend your earnings to unlock new playable characters, outfits, extras, and even modes. You can hurtle a hedgehog with Sonic, fling a fox with Tails, drop the beat with Beat from Jet Set Radio, and even yeet a yakuza with a chibi Kazuma Kiryu available to unlock. There are even more madcap characters to unlock as paid DLC, including Hello Kitty, and classic Sega consoles, such as the Dreamcast, Sega Saturn, and Game Gear, for some utterly baffling reason. But hey, I’ll take it! 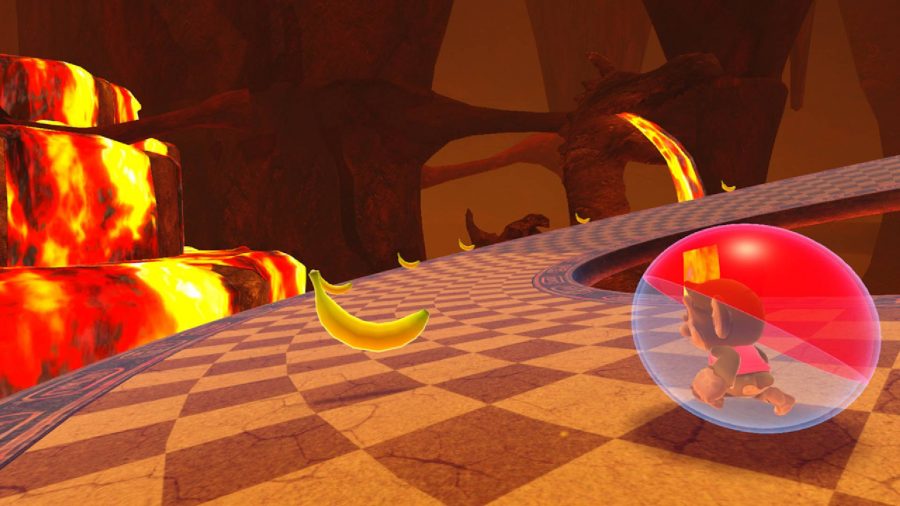 The huge amount of customisation options on top of this, including outfits for the mainline monkey characters, different balls, and optional photo mode frames, give such a huge wealth of content, and it’s all (DLC aside) unlockable within the game. I was already fairly hooked, but I’m a sucker for unlockable items, and I’m so grateful that the number of bananas needed to earn things felt like just the right amount to warrant continued play. You can also unlock different game modes, such as Golden Banana, where you have to find every banana in a level, so for avid players, there’s a huge well of content to be found if you’re happy to dig for it.

Multiplayer is also present and correct from early titles, with a wealth of optional games such as Monkey Billiards, Monkey Tennis, Monkey Target, and Monkey Golf. These might not have the sheen and precise controls of similar retail releases, but they do an admirable job of retaining the madcap monkey spirit, while offering some nice variety. It’s very clear that some could do with a tweak however, as both physics, and the controls, can feel off in a few. Monkey Bowling was a huge frustration, to the point where we simply gave up on it, and Monkey Target felt like it simply didn’t make sense. Luckily, less demanding minigames like Monkey Tennis and Monkey Golf actually feel achievable, and as soon as everyone playing understands, they’re a blast to play. Monkey Golf especially feels like it could be a game in its own right, so it takes the sting out of other underwhelming games. 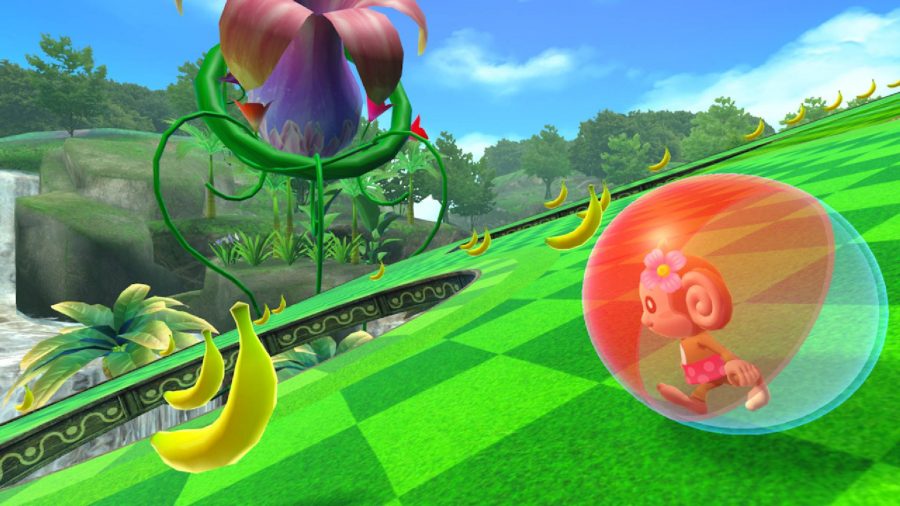 Beyond this, there’s still plenty to get stuck into, including missions (basically achievements) that when earned will shower you in bananas. A neat bonus to regular gameplay, and a great way to earn enough of the yellow fruit to unlock some lovely extras. There are also now online leaderboards, so you can gloat about your best times to friends, and see how you shape up against the world. Ranking challenges allow you to try and complete an entire world of levels as quickly as possible, in a real test of your skills. Honestly, I can’t imagine what any Monkey Ball fan could ask for beyond what is here. This is such a pure distillation of everything good about the series, with all the modern bells and whistles you would expect.

This port is also handheld fantastically, and I can’t think of a better platform for Monkey Ball than Switch. The pickup and play nature of the individual missions, as well as the wealth of multiplayer modes all controllable with a Joy-Con, make this a match made in heaven. While this game is also available on current-gen consoles like PS5, this port doesn’t feel like it’s being held back or stripped down. Locations are bright and colourful, the framerate is solid, and importantly, you are instantly brought back to the start of the level when you die. Which will happen a lot.

It’s clear some textures have been compressed to shrink it all down, but in a game like this, it doesn’t feel even the slightest bit important. All the gameplay and content is here, and it runs fantastically. I’m only slightly miffed that I haven’t had a chance to try it out on an OLED Switch yet, as the colourful chaos would surely be a delight. 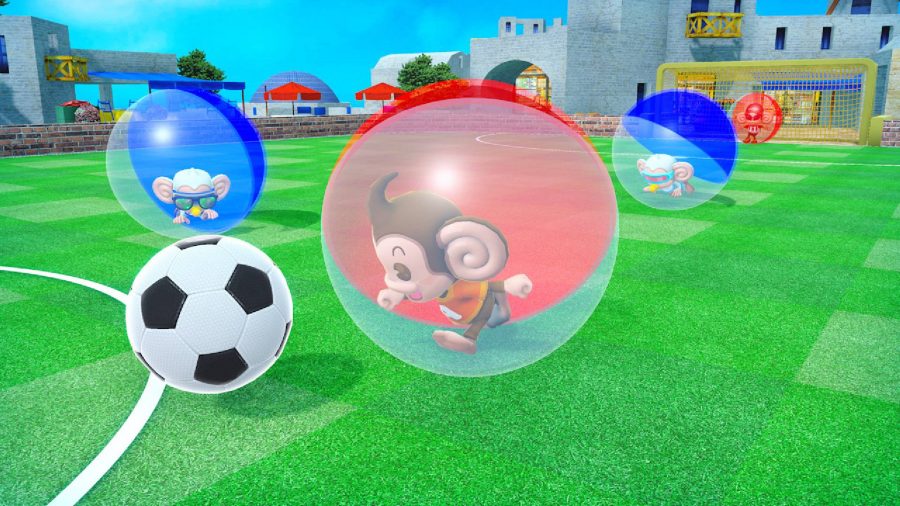 The music is also more ridiculous fun than a barrel of monkeys, with remixes of classic tracks that bring many of them up to speed with better production values and a slight rearrangement. Going back to the original tracks, there’s the odd track that doesn’t sound improved, as sometimes it feels like they’ve been shuffled just for the sake of it. And while the original soundtrack is available, it’s locked behind paid DLC. It’s a weirdly stingy move in a game that otherwise feels very generous. DLC characters being paid DLC doesn’t feel like it takes anything away from the package, but I’m sure many longtime fans would love the option to change soundtracks included in the package.

Altogether, it’s hard to critically assess Monkey Ball as it always feels like the sort of game you either enjoy or you don’t. It’s fiddly, it’s demanding, and it’s absolutely crazy, but as a fan, I can’t ask for much more in this package. Featuring heaps of content from classic titles, a wealth of unlockable customisation items, and so many different modes for veterans to sink their teeth into, this is the stuff dreams are made of. I do wish multiplayer was tightened up a little bit, as if you’re going to the trouble of making these modes, I’d like to at least enjoy them, so hopefully, that gets tweaked down the line.

Super Monkey Ball Banana Mania is a blast for veterans and newcomers, featuring plenty of appealing content, though I was slightly split on multiplayer. But with so much sheer monkey madness and unbridled fun, I’m very glad SEGA didn’t drop the ball.