Let it be known: I bloody love rats. My heart was instantly stolen by Tails of Iron the moment I saw their sweet little faces and quivering whiskers, and I knew what I had to do – save every last animated rodent I could in this medieval, Soulslike romp. But as I trawled through the dismal settings, lending a paw to the struggling villagers along the way, I found myself sucked in by a surprising amount of depth and attention to detail that left little wanting.

Tails of Iron has you follow the often tragic tale of Redgi the rat, and his brothers. With you at the helm, he claims the crown through a trial of combat, but immediately sees his father brutally murdered by those nasty, scummy frogs. What follows is a dark, heroic story where you are tasked to prove your worth as the new leader, helping aid the reparations required to restore your kingdom to its former glory – mostly by introducing enemies to the sharp end of your sword, clearing out bug-infested breweries, and rescuing your family and subjects alike.

When looking at Tails of Iron, you’re immediately struck by the beautiful yet brooding art-style. It’s a fine mix between stunning medieval tapestries and a dark, moody storybook, almost like an Old English version of a Grimm’s Fairytale, holding a Beatrix Potter book at knife-point. I know, I know, that sounds utterly bizarre, but it’s honestly quite striking to experience, and fans of Redwall will be impressed.

Despite being 2D, the layered backgrounds add a lot of depth to the setting, painting a harrowing image as you watch nurses aiding the injured, workers attempting to repair buildings, and the ever-looming danger of enemy processions in the near-distance. Even the menus and load screens are perfectly on-brand, and I felt completely transported to another world. The game also works beautifully on both handheld and docked mode, and I didn’t come in contact with any bugs (well, not glitches, there are plenty of creepy-crawlies to shank). 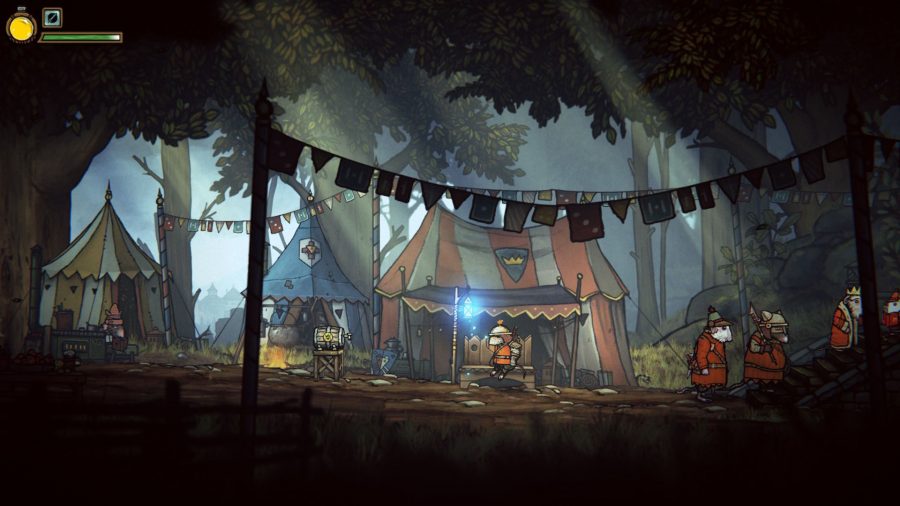 Character and enemy designs are varied, animations are unique, while armour and weapons fit perfectly with their stats and where you got them from. The game doesn’t hold back on the brutality and gore, but doesn’t feel gratuitous. Finishers are extremely satisfying, as you impale the heads of frogs, and dismember those pesky bugs, soon finding yourself coated in the neon goo of their entrails. But we’re not talking an all-out, Rob Zombie-style bloodbath – just enough to feel the grit of the battles you’re taking part in.

The swelling orchestrals of the soundtrack are fitting in both mood and setting, without being too distracting. Of course, this is complimented by the wonderfully mellow timbre of the ever-talented Doug Cockle’s narration (Geralt of Rivia from the Witcher games). Acting as narrator, his emotive and eloquent storytelling really enhances the fairytale feel, transporting you to the forefront of Redgi’s epic tale. Not a beat of the story is missed, and I could honestly listen to this man speaking about the rat kingdom for hours. 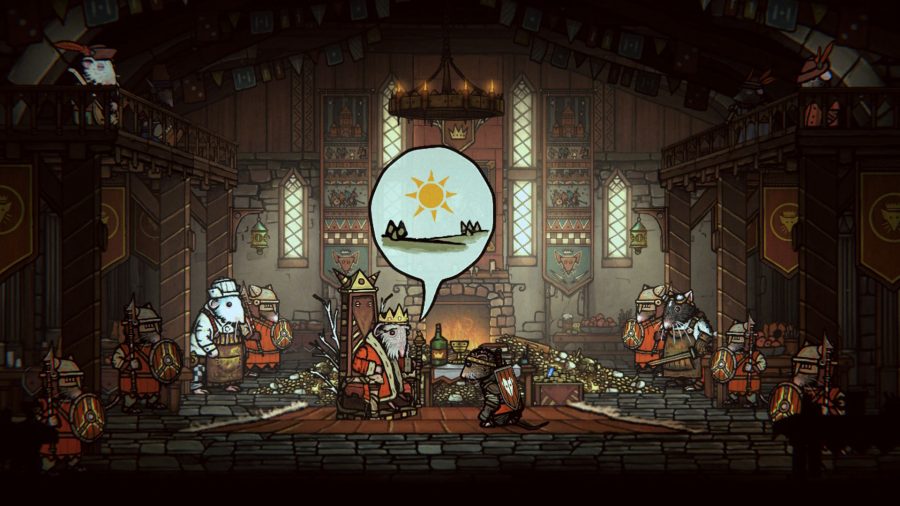 On the other hand, the rats have an… Interesting sound design. Whenever they speak, it sounds like an out-of-tune recorder or a broken flute (reminiscent of the Clangers) which was very cute and befitting of their distress at first. However, as any parent with a young child going through music lessons at the moment will know, it gets old pretty fast, and I found myself avoiding chatting with NPCs and even muting my TV to avoid these ear-piercing squeaks. However, I adored the pictogram speech bubbles they use to express themselves, the little symbols really felt like you were talking to a medieval critter.

The term ‘Soulslike’ gets thrown around a lot these days, but, pardon the pun, Tails of Iron does nail the soul of a Soulslike quite well. With essential elements like dodges and parries galore, studded with charged and short attacks, and pretty much everything else you could want.

The parries are one of the most comfortable I’ve used on the Switch, as you hold one trigger then hit the other at the right time, and the enemies even give colour prompts, which make it more accessible to new players without sacrificing too much of its trickiness. The screen changes to greyscale when you get to low health, though, which momentarily makes the colour prompts void, and does seem a bit of an oversight. 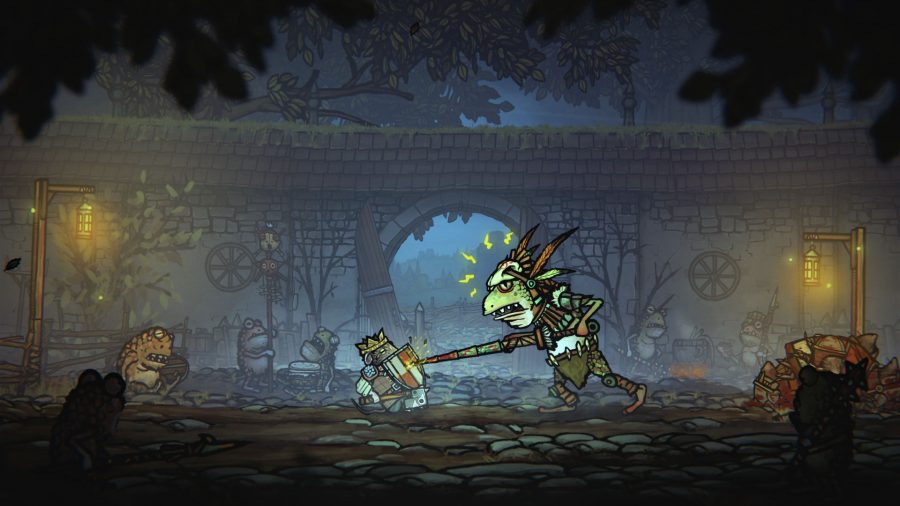 Regardless, it wasn’t Seikiro or true Dark Souls hard, but it definitely serves up a challenge, especially when you’re getting used to the controls. Though there are little rest spots which offer a quick save at frequent intervals, and you can pick up some tasty bug-juice to replenish your health from the enemies you slay. So even if you’re a bit of a noob, there’s plenty of fallbacks to stop you from throwing your controller down in frustration.

As it is a side-on 2D game, the hit boxes with bosses can be a little frustrating at times, and you may find yourself dodge rolling, still getting hit, then yelling ‘I was definitely not within range you froggy jerk’ at the screen (or maybe that last part is just me).

Additionally, button mapping isn’t an option, which did cause me a little difficulty as I wasn’t too impressed with the choice of jump and dodge buttons. Of course, this is entirely down to personal preference, and the layout is well thought out with the controller in mind – I imagine the lack of button mapping would be far more frustrating to PC keyboard-and-mouse players. 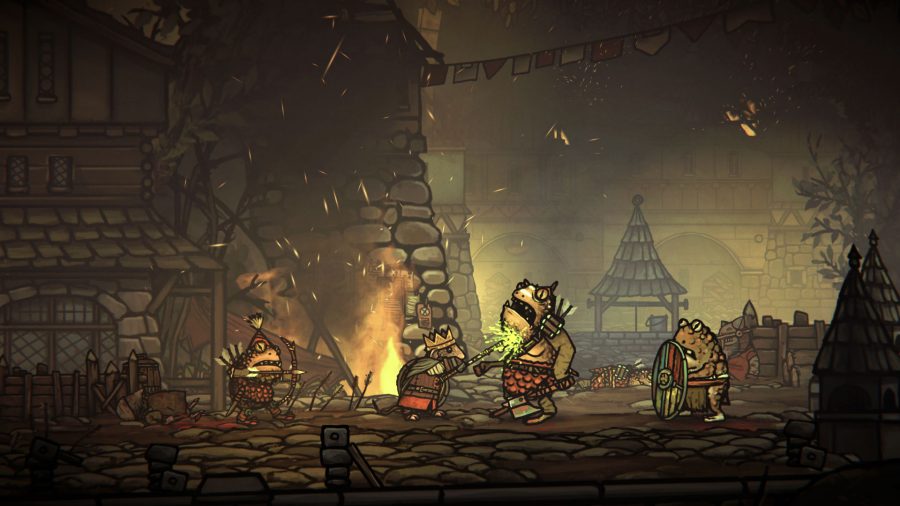 Different weapons and armour affect the way you play, with choices from heavy, medium, and light in all categories. It’s nice to see that armour isn’t always ruled out when you find a stronger set, as resistances play a pretty big role in Tails of Iron. If you’re struggling to get past a boss, you probably need to head back to an armour chest and adjust your set-up. However, there’s little variation in moves as you continue, regardless of what weapon you use, and there aren’t separate stances that you’d usually find in other Soulslike titles. This didn’t really bother me, but as the core of the gameplay is combat, it may get a little samey for some players.

For a game populated by creatures so small in stature, it has a lot of spirit

The game is pretty short, probably about five hours of content if you’re a Soulslike pro or aren’t fussed on 100%’ing it. It could likely stretch to seven if you want to collect everything and get all the trophies, or if you find yourself dying a lot. I personally didn’t find this an issue, and much preferred it being a short and sweet game rather than dragging itself out for the sake of it. It tells its story within that time, and builds a lively little rodent world that may just pull me back in for another run in the future.

However, the game does at times feel a little bloated, despite being such a short title. It features some Metroidvania-style backtracking when Redgi obtains new skills and weapons, and you aren’t able to pick up more than one side quest at a time. Of course, enemies respawn in certain areas as you duck in and out, so picking up a side quest, trailing all the way down and slashing your way through the sewers to kill a specific baddie, then heading back up to repeat the whole process again can feel a little tiresome. Especially as the likes of frustrating mosquitos and rolling bugs can take a nasty chunk off your health.

I also wasn’t personally a fan of the general vibe of the bog zones, so repeatedly trawling through those started to feel like a bit of a chore after a while. However, earning the gold to rebuild the castle is satisfying, and seeing your home restored to its former glory bit by bit was something that really made the struggle seem worthwhile. 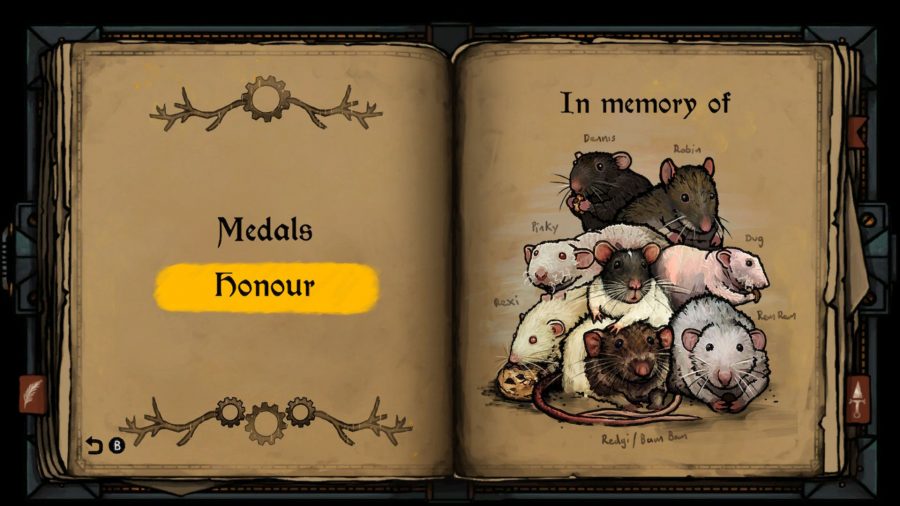 Overall, I really enjoyed my time with Tails of Iron. It encapsulates its era, setting, and emotions beautifully, while also transporting you to a unique and magical world of flute-voiced rats and bad mole-puns (and who doesn’t love a good pun). It may have a few minor shortcomings, but for a game populated by creatures so small in stature, it has a lot of spirit. I honestly hope to see Tails of Iron 2 some time in the future.

Tails of Iron is a thoughtful and detailed little game, with a brilliant visual style and an intuitive take on soulslike combat. Though it has its shortcomings, it's a strong and unique entry into the genre that serves up a great story and plenty of bug-slashing, frog-bashing fun.