Currently in a steady orbit at number three in the BoardGameGeek rankings, Terraforming Mars has certainly made a big impression since its initial release in 2016 (and you can find more of the best digital board games on mobile right here). As the leaders of giant corporations, players must work together to make Mars habitable by raising the temperature, increasing the oxygen level, and creating oceans. Enhancing these global parameters is all very fine and dandy, but a global corporation wouldn’t be a global corporation without putting its interests first.

With this in mind, players must also compete amongst themselves to gain the most recognition and enhance the reputation of their respective businesses. This is achieved by overseeing projects and developing the landscape until Mars is a nice and comfy place to live, with lashings of breathable air, a hospitable climate, and plenty of new oceans to fill with plastic.

Terraforming Mars is played on a hexagonal map, which is an accurate representation of the Tharsis region of Mars. Terraforming involves replacing the barren regions with more fertile alternatives. The lower elevation areas are perfect for placing ocean tiles that provide bonuses to a corporation’s income. The equator has a more hospitable climate, great for greenery tiles which will add to the temperature and provide victory points. There is also the opportunity to build point yielding cities and other special tiles such as steel and titanium mines.

In turn, players can execute a maximum of two actions or pass. As soon as everyone passes that particular round, or generation as it is called, it draws to a close. The standard project actions can be used by all players and allow you to spend MegaCredits to do such things as raise the planet’s temperature, build a city, place a terrain tile, or sell unwanted cards for some ready cash. These standard actions may not be the most cost-effective, but they can still get you out of many a tight corner.

A more efficient way of getting things done is to use a project card from your hand. Each one will cost MegaCredits and you may also need to meet one or more preconditions. For instance, the Artificial Lake project card costs 15 MegaCredits and allows you to place an ocean tile as long as the temperature is above -7°C.

Project cards are at the heart of Terraforming Mars. There are around 200 of them, ten of which will make up each player’s starting hand. Thankfully, these cards can be organised in various ways, which makes selecting which ones to play much easier. The way that the explanation text is sometimes cut off mid-sentence is not a great look, but a tap will bring up the text in full at the expense of the illustrations. Some cards have ongoing uses, like the one that introduces tardigrades and then allows you to regularly introduce extra microbes that will award victory points.

Most cards will have tag icons that have a thematic link: for instance, the Deep Well Heating card has both building and power tags. Our friendly little tardigrades have a microbe tag. This works well with the Decomposers card, which states that if you play a card with an animal, plant, or microbe tag then you can add an extra microbe. Chaining together these card combos gives a real sense of satisfaction; especially since they make perfect sense thematically.

The resources that you produce and collect have various uses. Steel and titanium can be used to reduce the cost of playing cards, which are tagged with ‘building’ or ‘space’ icons respectively. Plants can be transformed into greenery tiles and electricity can be used to power certain production cards. Any unused electricity is converted into heat to raise the temperature of the planet. Every time that an action causes one of the global parameters to increase, the player concerned will add to their terraforming rating; a measure of their base victory points. 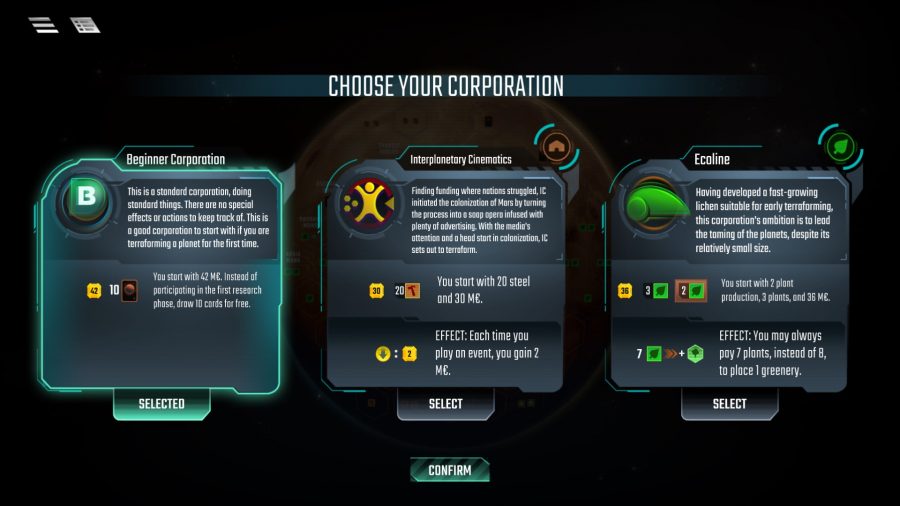 Victory points can also be earned by claiming milestones and funding awards. There are five milestones available but only three can be claimed each game. For instance, the first player to have placed three greenery tiles can spend eight MegaCredits to gain the gardener milestone, not only proving their green-fingeredness but also grabbing five victory points. Awards work similarly in that a player will pay to fund one of the five awards. The key difference is that the victory point bonus isn’t awarded until the end of the game. Just because a player has paid for and is on course to claim the landlord award for having the most tiles in play isn’t a guarantee that the situation will not change before the game ends.

For me, the standout feature is the way that such a rich theme has been melded into Terraforming Mars’s balanced mechanics. It is clear that the designer has put a lot of thought and research into his game. Consider the knock-on effects of changes to the global parameters. Using oxygen to thicken the atmosphere will create greenhouse gasses that will raise the temperature. This increase in temperature will cause ice to melt creating water and eventually oceans. The mountains contain vital elements, plant life flourishes in the more temperate equatorial region, and historic points of interest, such as the Viking lander site, gives bonus project cards. 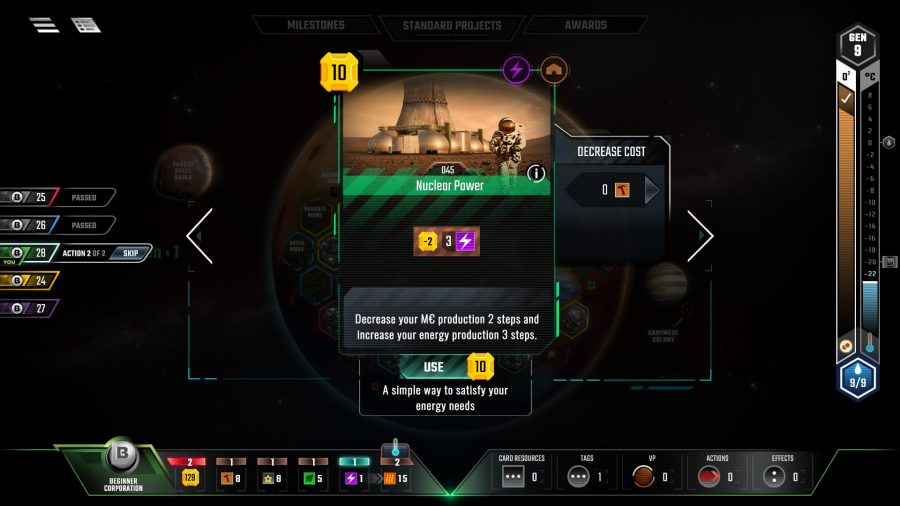 The graphics certainly evoke a feeling of sparse bleakness; you can zoom and scroll the map but don’t expect any fancy 3D flourishes, just a rather disconcerting ripple effect. It is certainly a case of function over form, but everything is smooth and responsive. The way that the player boards have been condensed works really well, allowing you to track ongoing effects and card tags with ease. A few issues have been resolved and improvements made in the recent update, including a fix for the protected habitats card.

Although the app works well, I still have some reservations. Terraforming Mars is a lengthy and involved game. The five-stage tutorial takes you through the rules in a logical and concise way, but the game takes a long time to play; especially if you make use of the more strategic and highly recommended card-drafting variant. The idea of committing such a large chunk of time to a local pass-and-play game isn’t great, especially when the save game option seems a bit hit and miss. 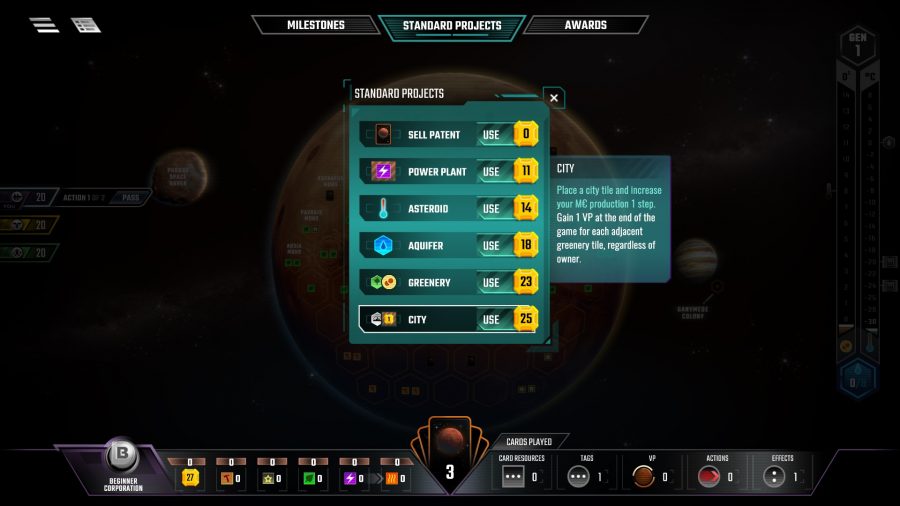 Online games can be set with a time-limit of between 30 minutes and 450 hours! Mercifully, the latest update has significantly improved the online experience with the introduction of notifications. How such a vital feature was missing from the initial release is baffling. That leaves the option to play solo. Firstly, do not expect any opposition from the lame AI; I beat all three levels on my first attempt. The dedicated solo mode is also disappointing, being just a straight race to fully terraform Mars within fourteen generations. The game is really screaming out for a fully featured solo campaign where goals are varied, and project cards limited.

The designers have done a terrific job of adapting a complex game to digital devices, but haven’t paid nearly enough attention to how digital gamers will actually want to play. I’m not convinced that long and involved games are a great fit for online play, even with the notifications issue fixed. There is just too much to remember and to keep track of between turns. With better AI and a substantial campaign, the digital version could have been an excellent solo experience. I would like to see more developers focus not just on producing an accurate digital conversion of a board game but also really exploiting the advantages offered by the digital format.

A classic game and a well-designed adaptation, but solo play lacks long-term challenge.