If I made a list of things that have made me cry – puppies, a good dessert, The Pokémon Movie, remembering the last season of Game Of Thrones – one thing I wouldn’t ever have thought to include was Tetris. But now, I have some organising to do. Tetris Effect: Connected brings the classic puzzler to life with a hypnotic, dazzling, and genuinely emotional journey that I wasn’t expecting. All while being a very good version of one of the best video games ever created.

Originally released as Tetris Effect, but now with the added ‘Connected’ moniker and a suite of multiplayer modes (more on those later), Tetris Effect is designed as an experience and comes from the brains of acclaimed producer Tetsuya Mizuguchi and director Takashi Ishihara.

Their previous production credits include Meteos, Lumines, Rez, and Child Of Eden, so rhythm-based and gorgeous puzzle games are certainly a trend. Tetris Effect is no different, playing almost as more of an experience than a game at points. The single-player mode is even called Journey, and it’s a series of increasingly challenging Tetris boards, but each with a distinct visual and musical theme.

In Journey, the background itself changes, as does matching swirling particle effects, and even the tetrominoes (yes, that’s what they’re called) that you drop will match the theme. A desert level sees them made out of sand, one level has them made out of jewels, and an ocean-themed level not only sees the tetrominoes composed of a liquid aquatic blue, but dolphins leap out of the water every time you clear a line. It’s fantastic, aesthetically pleasing, and mesmerizing stuff. 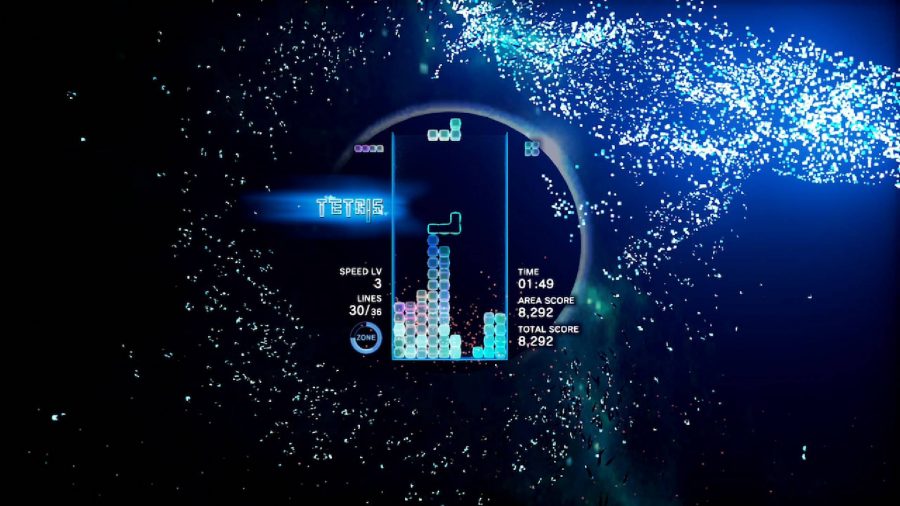 The killer difference is, that each movement, twist, or drop of tetrominoes in the stage is met with a reactive sound. These work in sync and key with the music, to add little flourishes to the already pumping soundtrack. If you’ve played Lumines, you probably have an idea already. It’s this interactive element that lifts Tetris Effect: Connected above a simple puzzle game into an incredible experience. It’s easy to get lost in the beauty of each moment, and feeling in control of not only the game of Tetris, but also the music and effects around each level is an immensely engaging and satisfying gameplay loop.

There’s also the new Zone feature, which when you build up your meter, allows you to slow down gameplay and try to clear as many lines as possible, building a zone at the bottom of the board that lights up with each line. It’s a great way to get out of trouble and adds a bit more strategy to the game, so this isn’t just regular Tetris with fancy effects. 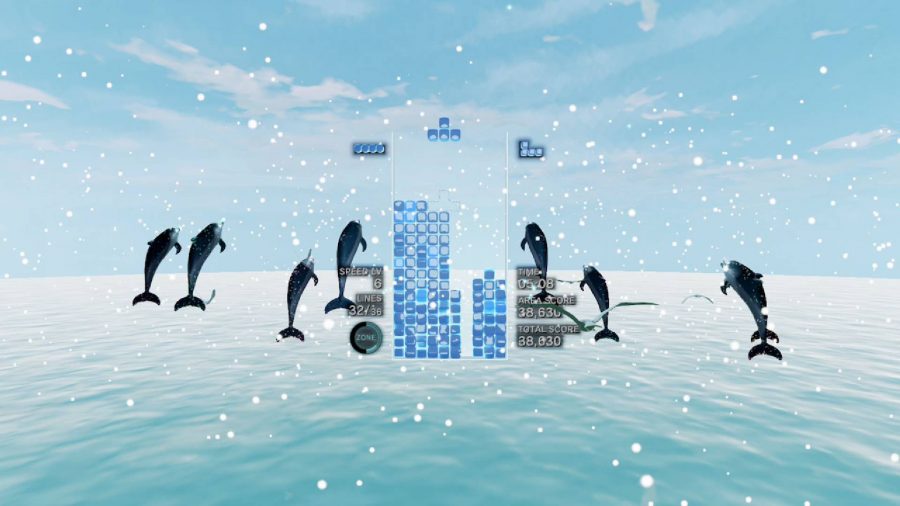 Progressing through the Journey mode there are plenty of other fantastic boards, some great shifts in tone and energy throughout, and it culminates in something truly special towards the end. It’s quite short to blast through, depending on your Tetris skills, but this is an experience meant to be revisited. Luckily you can do so happily thanks to the multiple difficulty options. I can easily see this being something I return to once a year, or when I want to wind down. There’s even a theatre mode, should you simply want to sit back and enjoy the show.

Next up are the Effect Modes, a series of single-player challenges you can explore to your heart’s content. They are broken up by mood, so you can play games designed to encapsulate focus, relaxation, and more. It’s a nice way to break things up honestly, as jumping into a relaxing challenge just to escape for a while is nice. Meanwhile, it’s easy to find some tougher gameplay in the Adventurous area, with different modes, such as mystery (random effects pop up), purify (clear Dark Blocks), and much more beyond that. Basically, there’s a huge amount of Tetris here, and you can play in almost any way imaginable. You can even earn experience to unlock avatars and music, so there are more reasons to revisit as well. 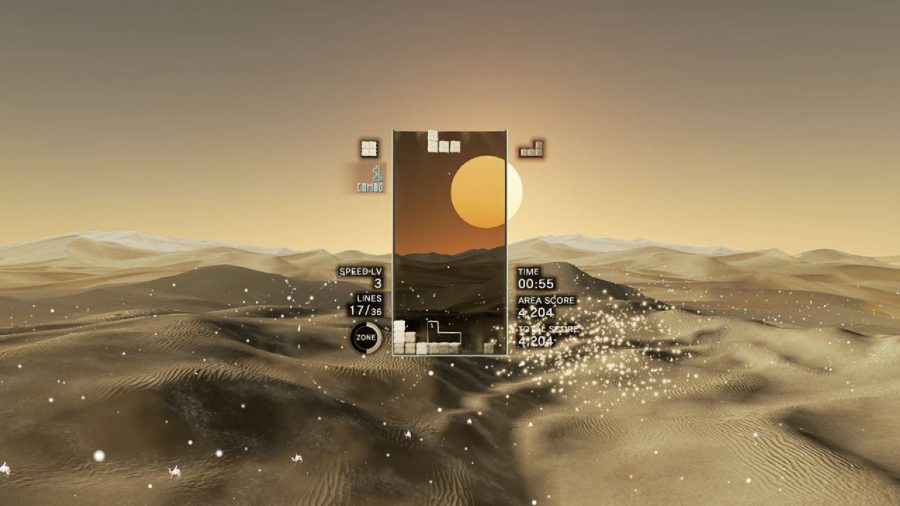 The huge amount of modes on offer here do a good job at showing exactly what Tetris is for different people. Some people play to chase high scores, they want the thrill of a perfectly timed T-Spin, and love to crank the speed up to eight from the beginning. But Tetris Effect: Connected also encourages you to take your time, enjoy the experience of Tetris, and with so many modes designed around relaxing, it feels comforting to remember how much video games can do for us in that regard. I got lost playing through the Relax modes for a while, and enjoyed the different themes while I got in the flow of clearing lines.

Multiplayer keeps up the generosity with a heap of different ways to play, either cooperatively or against friends and random opponents. Connected is a fantastic cooperative mode where you work with two other players, against an AI opponent. You have to work quickly to clear enough lines to beat them, and there are increasing difficulties as you carry on. One great change to this particular mode though, is that as the music reaches a fever pitch, all three player’s Tetris boards will join together into one huge board, and everyone can place blocks anywhere. Suddenly, you have to work together and be as smart as possible, and it’s a truly excellent addition to an already great mode. 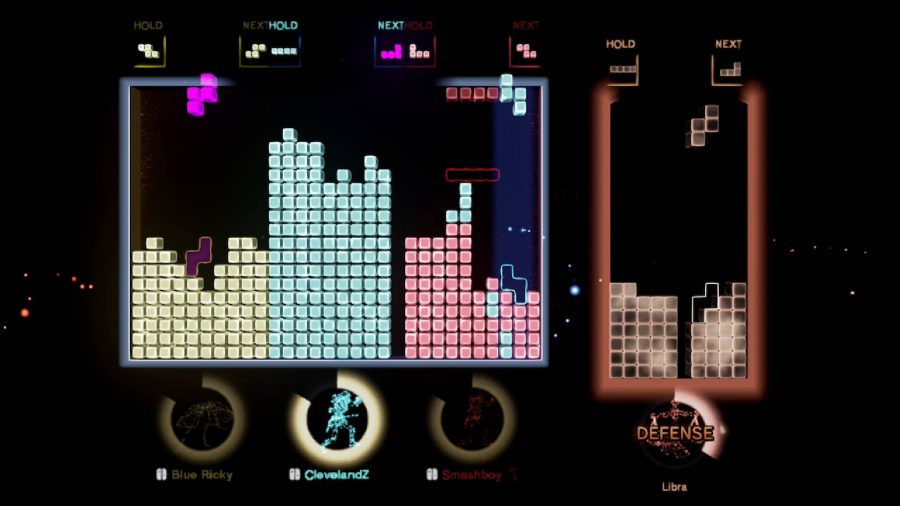 Finally, you have competitive multiplayer, with different modes featuring both score-attack options, and more traditional head to head matches, where you’re trying to knock the opponent out. While I’ve played plenty of Tetris 99 and its frantic modes with pals, Tetris Effect: Connected offers such a different style of play that I can see myself returning to these modes repeatedly. Even a few matches with friends were an absolute blast, with both the fantastic interactive music and visuals giving an extra kick of style to a fantastic game.

I want to finish on the presentation because I can mention mechanics all day, but ultimately this is Tetris and you already know if you like Tetris. This game started out life on PS4, and was conceived with VR in mind, something you can definitely feel with the distinctive style and constant swirling particle effects. But it fits onto Switch perfectly, and I imagine will be a perfect fit for anyone lucky enough to have picked up the OLED Switch. A lot of the backgrounds are deep blacks permeated briefly with flickers of colour to the beat, so that screen is going to bring them to life with incredible contrast.

The visuals are simply gorgeous in every mode, and while the Switch can occasionally struggle to keep up with every single particle on screen, causing some minor chugging, the game ran smoothly for almost all of my playtime, and my fun was never interrupted. It certainly isn’t as smooth as the PS4 version, and visuals have taken a minor downgrade, but considering how much of the game you concentrate on the main Tetris anyway, I don’t think a dip in visual clarity is a problem when it means you get portable play in return. 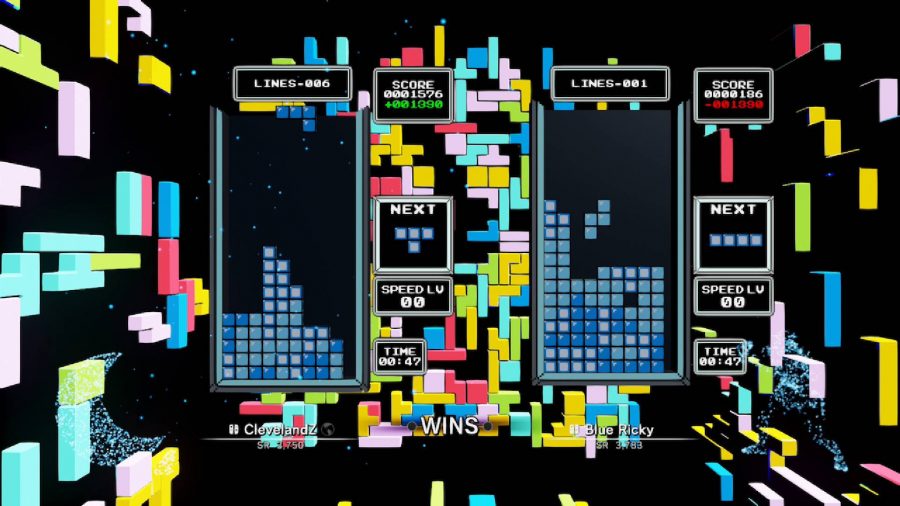 Importantly as well, this is a game designed around the music, and the soundtrack to Tetris Effect: Connected is absolutely stunning. This is easily one of the best soundtracks I’ve ever heard, and almost worth the price of admission alone. The beautiful ethereal main theme will stick in my head for weeks, and every single song through Journey mode was brilliant. Some tracks stand out more than others, especially ones that build to huge moments in sync with the visuals, where the entire theme and colour of a level change dynamically with your gameplay and score.

Tetris Effect: Connected is an incredible video game. It’s overwhelmingly stuffed with different modes, some fantastic ways to play with friends, and wrapped up in one of the best audio/visual packages I’ve ever played. Compromises had to be made to get it all running on Switch, but playing handheld on the OLED feels like such a natural fit that I doubt many would ever notice. If you love Tetris, puzzle games, or even rhythm games to any extent, this is an absolutely essential purchase and immediately one of the best puzzle games on Nintendo Switch.

Beautiful visuals, a stellar soundtrack, a plethora of great modes, all wrapped around one of the most mechanically perfect video games ever made, Tetris Effect: Connected is an essential puzzle game and a perfect match for anyone with the OLED Switch.