Ever since I first saw The Artful Escape it felt tailor-made for someone like me. Thanks to an enthusiastic Grandad, I was raised on a healthy diet of psych-rock like Ziggy Stardust, T-Rex, and Iggy Pop. In fact, I was lucky enough to see David Bowie live at twelve years old, a formative experience that set me on a path. Not a very successful one obviously as you’re reading my writing about video games, but I’m still a musician at heart.

I learned guitar, played in bands, and have spent a lot of my life struggling with both identity, and my place as a musician. So, when a game that looks like Wes Anderson made a Double Fine game came along to address these topics, well I was intrigued. Essentially, what I’m saying is, that I really want to love The Artful Escape. Sadly, my thoughts are slightly more complicated.

Despite my complicated feelings, The Artful Escape kept me thrilled from start to finish, and I really enjoyed the performances, the writing, and the visual style. But for a game all about discovering who you truly are, it’s sadly fitting that it should suffer from something of an identity crisis.

Right, let’s start with the good. The Artful Escape is the story of Francis Vendetti, or rather it isn’t, as Francis is the nephew of famous folk musician Johnny Vendetti and has lived in his shadow all his life, even though he never met him. Francis is also a musician, but because of his lineage and a startling resemblance to his uncle, it feels like the whole world wants him to play folk. In fact, at the upcoming anniversary of one of his uncle’s albums, Francis is booked to play, but only songs made by his uncle. 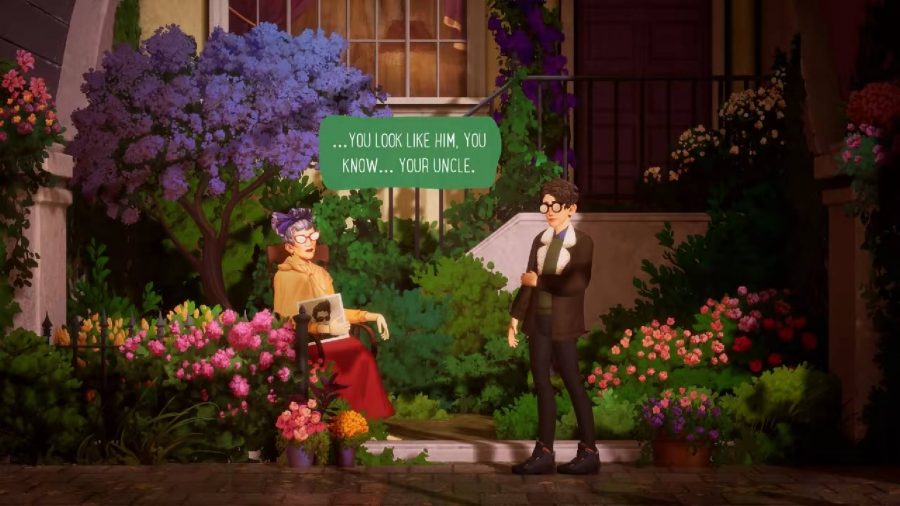 This kicks off something of a revelation in Francis, alongside a meeting with a young light and sound engineer called Violetta. When playing around on his guitar you find out quickly that Francis has a lot more in him, and can shred the guitar like Mick Ronson in 1972. As he wanders back through his home town of Calypso, with posters adorned on every corner plastered with his Uncle’s face, we hear Johnny Vendetti’s folk music floating on the breeze, quietly reminding us of the presence he has over this town and Francis.

As Francis goes to bed, however, he’s met by a cosmic being who summons him to a concert somewhere in the galaxy, under the tutelage of famous musician Lightman (played incredibly well here by Carl Weathers). So Francis sets off on a voyage of discovery through the most psychedelic corners of the cosmos, meeting truly strange creatures, and entertaining every planet he visits with some seriously sick guitar licks. 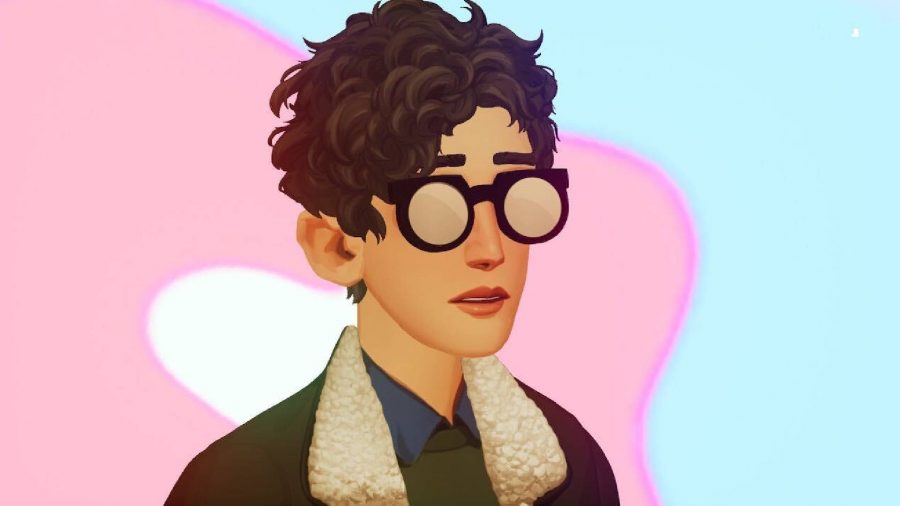 This is a fantastic premise for a game, and it’s brought to life wonderfully through incredible vocal performances, sound design, and an art style somewhere between an oil painting and an illustrated children’s pop-up book. Every location makes fantastic use of colour, depth, and layers of sound to bring every area to life. I was constantly excited to visit the next location, discover another planet, and a vivid environment littered with crazy alien creatures, but I often felt like I was having to work against the actual gameplay.

Most levels play out like a standard platformer, you run from left to right constantly, but you can also hold Y to shred on your guitar at any point. This adds a fitting guitar solo over whatever the current song is, much like the harp in Skyward Sword, and is a really fun addition that adds a lot to the flavour of the game. The platforming though feels floaty and almost superfluous, not good enough to truly enjoy and just bad enough to occasionally get in the way, and often I failed for very arbitrary reasons. 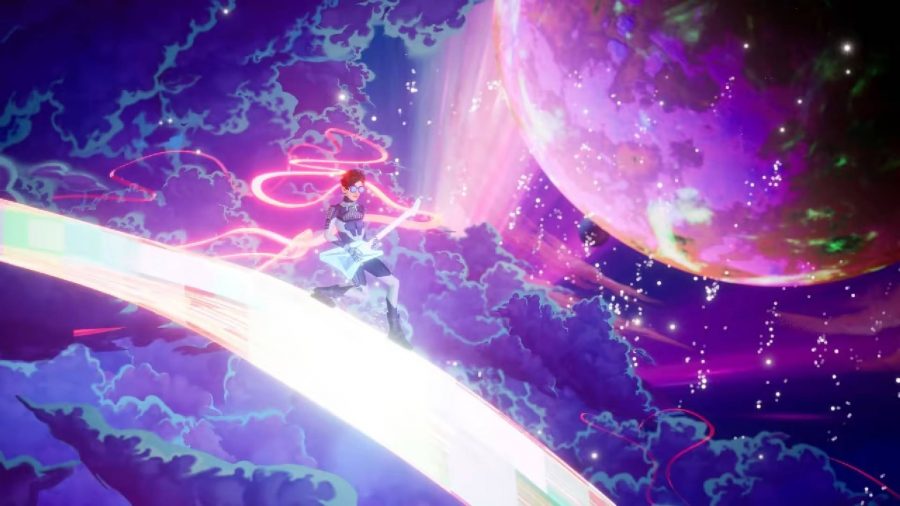 This isn’t Sayonara Wild Hearts with high scores and gameplay tied to the rhythm, the game doesn’t even play like the music levels in Rayman Legends, the platforming and the music is all very loose. It’s very much up to you to just wander, experiment, and enjoy the scenery. But jumping through these levels doesn’t feel tight or challenging enough to be fun, even if sliding down hills is entertaining. I also fell down gaps occasionally because there’s very little to tell you what is and isn’t a platform, and it gets in the way of the flow of the game.

I would prefer either it to be a tighter experience with challenging platforming, or for platforming to take a backseat, and the game to be more about the music controls. Beyond the regular Y button to shred, there are occasional musical bosses that act as a game of Simon says. You jam alongside alien creatures and must follow the pattern they show you to play along. This is great, but also feels slightly underbaked, as there’s very little room for experimentation in a game all about forging your own path. Still, this element is really fun, and is the highlight of the gameplay for me, especially some of the grander late bosses and the more difficult combinations you have to pull off. 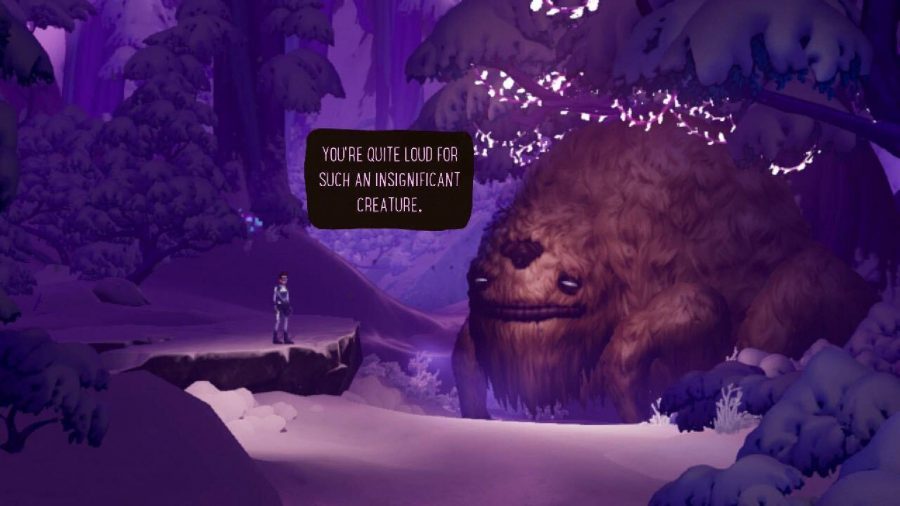 Outside of the boss battles, what’s very satisfying is watching Francis grow, which is good because that’s the heart of everything at play here. We follow him as he has an epiphany, then we help to create his new persona, choose a name, his backstory, his outfit, and more. I think what I really would love is to customise his sound somewhat. Either choosing some of the parts that accompany the music (the type of distortion on a guitar, add more cowbell, maybe disco drums, etc) and especially, I would love the chance to make a riff.

When given the layout of the guitar to play alongside alien creatures, you can make rudimentary patterns, but the notes change constantly to suit the song. I would love to be given the chance to create a final epic riff like the town theme tune in Animal Crossing, a real signature beat that brings out even more creativity from the player and a touching footnote to performances. For a game all about discovering yourself as an artist, there’s quite a lot of hand-holding, and very little chance to actually be creative. It’s more like a musical rollercoaster, but that’s not necessarily a bad thing. And to be clear I enjoy the game, it doesn’t need to be Rocksmith to be good. 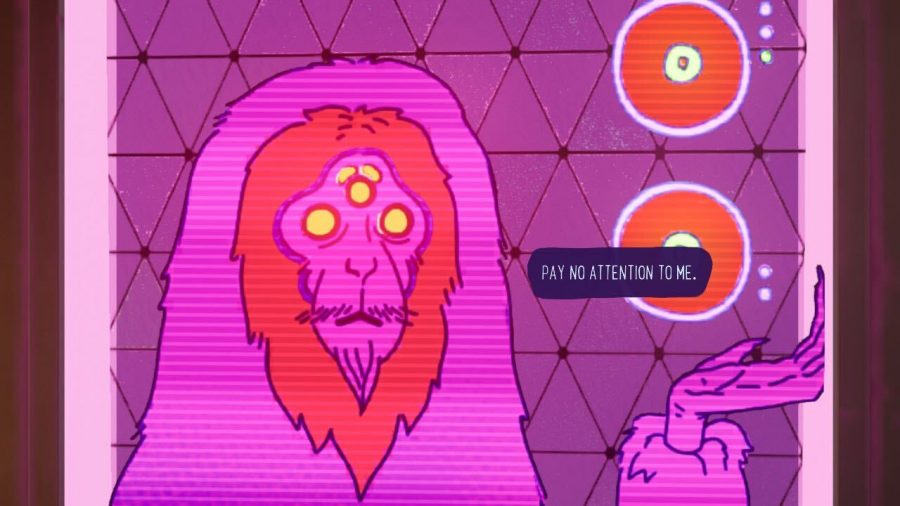 Luckily the soundtrack is consistently absolutely stellar, paying homage to the genres the developer so clearly loves while forging its own identity. From the whimsical folk that haunts the town of Calypso, to the interstellar prog-rock that’s broadcast to the entire galaxy, The Artful Escape treats every song with both a loving sincerity and inherent silliness that fits the tone of this video game perfectly. Plus, being able to hold Y at any moment to play an accompanying guitar solo never stops feeling amazing, even if it is a bit difficult to hold Y and jump when B is the jump button. Mapping this to a shoulder button would have been amazing here.

While I have my niggles, what ultimately works for me is the overall story of people struggling with what it means to be an artist. This, alongside the fantastic alien creatures with some amazing and consistently very funny vocal performances (Lena Headey, Jason Schwartzman, and Mark Strong all do very well here), the fantastic performance of the two leads, and the wonderful marriage of the psychedelic soundtrack and visuals. 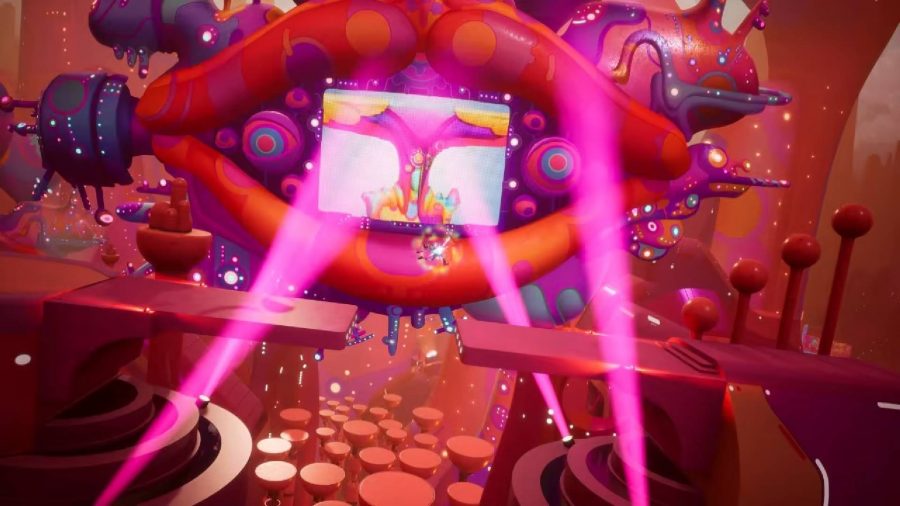 In case you haven’t seen any trailers, The Artful Escape is visually astounding. Luminous colours fill the screen at any given moment and each alien planet has a new towering megastructure or a gargantuan alien lifeform dazzling with strobe lights and swaying neon signs. Perhaps the simple platforming is there to facilitate just enjoying the visual show, but even then it often gets in the way for me.

The Artful Escape is visually astounding

Now, we do have to mention the Switch performance. Starting life on Xbox, I can only imagine that this game looks utterly sublime in 4K running on a Series X. The Switch version does admirably well with minimal load times, and all the colours have made their way over, looking especially luminous on the gorgeous OLED screen. But the cuts made to squash this onto Switch are obvious, as textures can become very muddy and unclear, with scenery occasionally even very obviously popping in as they load. Many parts of the environment also have clear jagged edges presumably from alias artefacts. 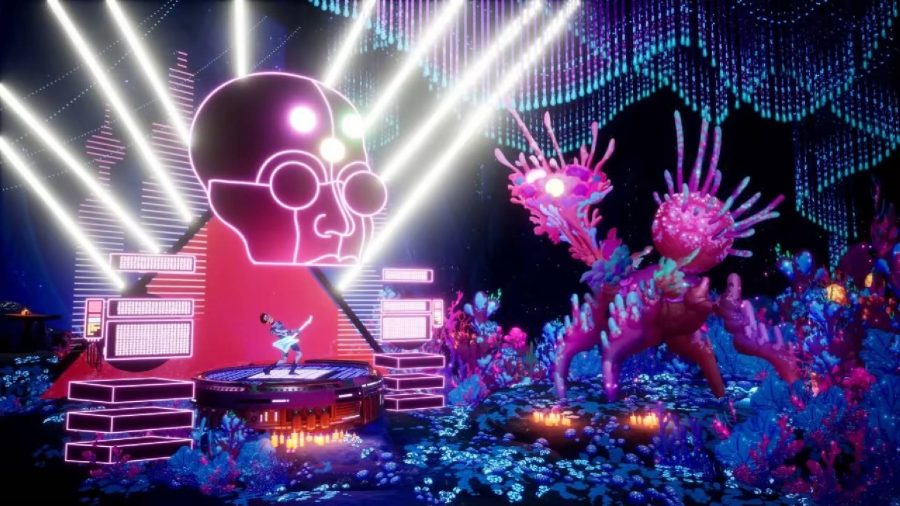 There’s also occasional frame stuttering, both handheld and docked. Sometimes a lot of things happen on the screen at once which I fully appreciate, but very occasionally I was taken out of the moment by the performance. This isn’t a deal-breaker, it often looks great and the art style is probably very well suited to this conversion unlike many other games, but if you’re looking for the performance issues you’re going to see them. I hope a couple of patches can help with this, as playing handheld on the OLED with some good headphones is an incredible way to enjoy this game.

I loved experiencing The Artful Escape, but I wish I enjoyed playing it a bit more. It feels torn between a visual experience and a video game, especially compounded by the performance issues on Nintendo Switch. Don’t let that dissuade you if you’re a musician at heart though, or just someone who wants to enjoy a 4-5 hour ride through the cosmos, because this game still looks great thanks to smart art direction, while the story of a young artist emerging from the shadows to forge his own path is beautifully told and made me genuinely laugh like a buffoon at several moments.

A roaring cosmic escapade that would make Bowie proud, The Artful Escape tells a beautiful story of artistic integrity and brings it to life with show-stopping visuals that never relent. It’s a slightly better story than a game, however, and I hope the Switch version gets a tune-up down the line.