Ten years on, it’s interesting to look back at the original launch of The Legend Of Zelda: Skyward Sword. After the roaring success of Twilight Princess, the beautiful world of Wind Waker, and the tease of a new entry that truly uses motion controls properly, my excitement was immeasurable. I was also old enough when the original The Legend Of Zelda: Skyward Sword came to Wii to pre-order the game, with the golden Wiimote and soundtrack included. However, my memory of that game, sadly, is of an uphill struggle with wobbly motion controls and bad pacing. So does this revisit change that?

Skyward Sword has an incredible story, it’s an evocative and ambitious tale that isn’t afraid to genuinely characterise the famously mute Link and princess Zelda with a real friendship, some humour, and lots of youthful energy. Nor is it afraid to claim a definitive place in the series’ borderline nonsense timeline.

The art style and design here is also top-notch, with the beautiful impressionist style bringing each area to life and each character looking appealing and emotive. It also features some of the series’ best dungeons and items, with ingenious level design through the entire 40-hour adventure. Seriously, the Ancient Cistern and then the Lanayru Pirate Stronghold are some of the best dungeons and sets of items the series has ever produced.

Unfortunately, what the original Skyward Sword also did though, was completely ruin almost all of this with abysmal pacing. Your intrusive companion Fi, repetitive item information, dodgy motion controls, plenty of backtracking, repeated dowsing, and slow, meaningless traversal in the sky all dragged this story to an absolute crawl. So, how many of these things does the HD remaster fix? Only some, but the changes are meaningful enough to genuinely change the game. 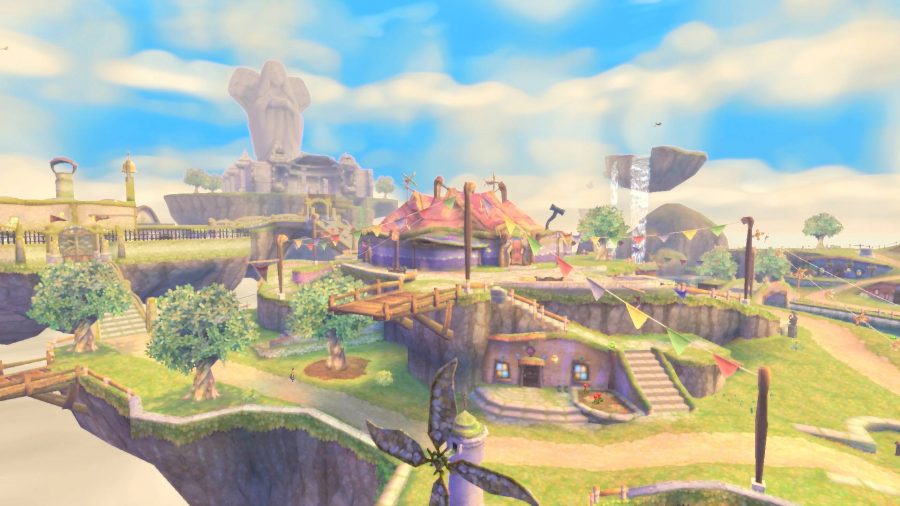 Likely the most obvious change, is Skyward Sword’s revamped control scheme. The previously motion focused action was only possible with a Wiimote and the Wii Motion Plus peripheral, using these to control Link’s sword and various items with a questionable amount of accuracy. On the Wii, when these controls worked, they were great, but it was frustratingly often that they didn’t. On Switch, however, not only are the joy-con mapped motion controls more successful, but now there’s also button mapping for players not wanting to waggle their sword.

Motion controls here are an improvement on the Wii in almost every way. They feel more accurate, they work more consistently, and the joy-cons themselves are more comfortable to use. Crucially, however, there’s no option for left-handed players to map pointer controls to the left joy-con, a problem also prevalent in Super Mario Galaxy and Pikmin 3. While the Wiimote was easily swapped to the left hand for players that needed it, the joy-cons are designed specifically for either hand, so this continued omission is frustrating, especially when it’s easily possible as both joy-cons have the same motion and pointer capabilities. Still, when using motion it feels much better and sword fights especially feel way more engaging when there are much fewer failed swings and blocks. Meanwhile, other motion focused items like the beetle and bow feel the best and most accurate they ever have.

Alternatively, there’s now the option for button controls. Sword strikes are performed with a swipe of the right analogue stick from one side to another, which does a good job of approximating the directional attacks needed. Other motion moves like shield blocking are also mapped to the buttons, and when using pointer-based items like the bow, the right analogue stick gives you the option to still move the controller for motion controls. This control method transformed the game for me, and I didn’t mind the motion controls previously. 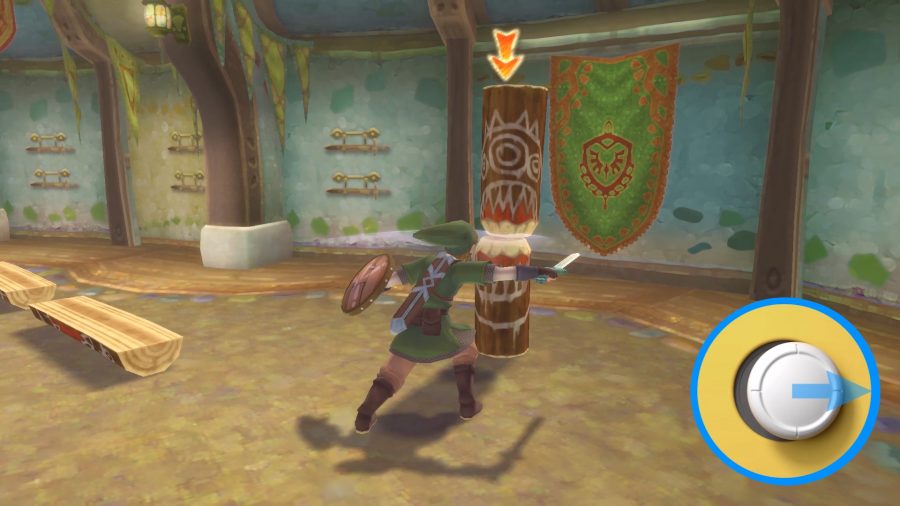 Making each move much easier and accurate, significantly helps the pace of the game, and eases frustration with the games’ many enemies who demand certain directional sword strikes to be beaten. It’s not perfect, as with the right analogue stick now mapped to sword strikes, players will have to hold L and then use the right stick to move the camera. This is a clunky solution, and considering the fact most players will use the camera much more than the sword, it is frustrating to not have the option to swap the button mapping. I would much prefer to have the camera assigned to the right stick as standard, and then use L to change the right stick to the sword. It’s not a huge issue, but it means that ultimately, neither control method is a perfect way to play the game.

Other improvements include streamlining at the beginning of the game, meaning you get to the surface over-world quicker. Also, the frequency that your companion Fi stops to give you information has decreased. These small changes help to improve the rhythm and flow of Skyward Sword, but sadly, some of the major pacing issues haven’t been addressed. This is still a game with a lot of backtracking and only three main areas in the surface world to explore. After the first third of the game, you’ll return to these sections repeatedly, and have to complete some annoying fetch quests. You also have to replay one boss, possibly the worst, several times over the course of the game as well. 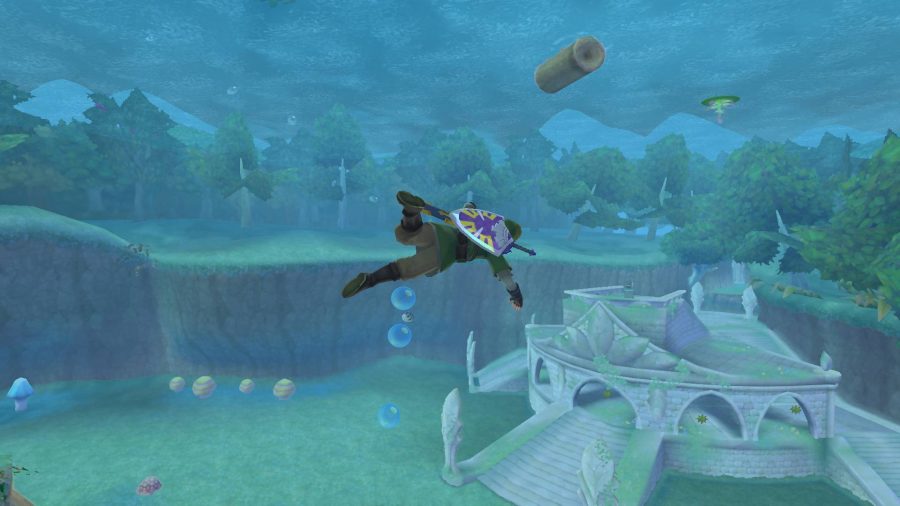 It should be noted, that despite Nintendo clearly making a lot of effort to enhance the game in several aspects, a lot of the changes being accessibility improvements that are genuinely great to see, one improvement is locked behind a £30/$30 amiibo. The Zelda & Loftwing amiibo unlocks the ability to return to the sky at any point on the map, instead of at the specific bird statues you’ll find around the world. The bird statues are fairly common, so this isn’t earth-shattering, but it’s still gross to see any improvement to a game often maligned for its pacing and issues, locked behind a hefty additional purchase. And that’s if you can even find the amiibo in question.

However, Skyward Sword is still a great game with some fantastic elements and the changes here make it sing. The combat is still some of the smartest in the series, with the directional sword fights feeling so satisfying to nail. Enemies demand your attention with shields blocking certain angles or appendages that need certain items to reveal and attack. Some of the later items and puzzles work incredibly well, with some dungeons giving off a great sense of scale and emanating divinity with the daunting statue designs, frankly stellar music, and beautiful beams of light bringing the art style to life.

The bosses are also tough and memorable, especially Koloktos and the sky-bound Leviathan fight. They are each smart problems for each dungeon’s latest item to solve, while the more obvious antagonists like Ghirahim and their actions are a fantastic driving force for Link’s adventure. The final, grand and powerful boss encounter is some of the best combat in the entire series, it’s just a shame it’s in the same game that you fight The Imprisoned several times. The whole story of Fi and the Master Sword has always been great, but now it’s closer to having the pace it always deserved. 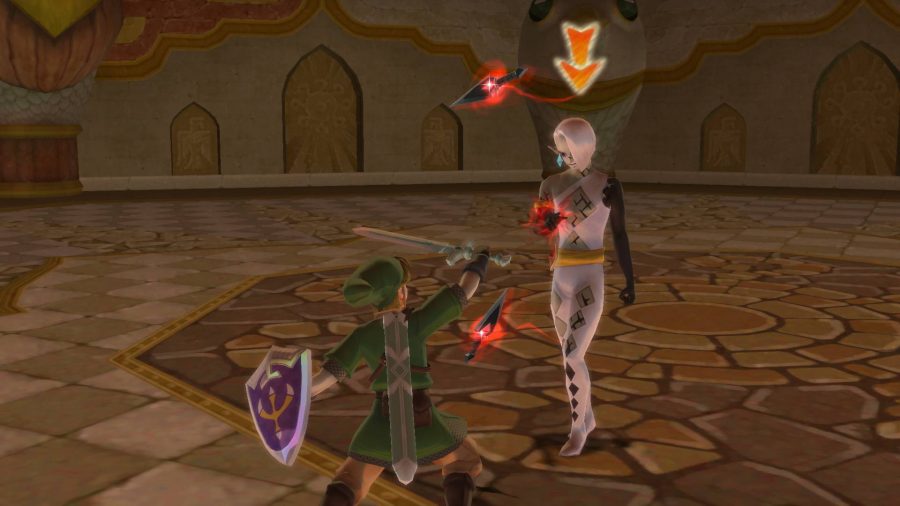 A lot of the moments that I didn’t like from the original were improved, such as flying through the skies on your loftwing and swimming. The button controls make both of these so much easier, and the fact I can still use pointer controls for arrows or slingshots gives you the best of both worlds. Plus, the vastly improved visuals and framerate make the action throughout feel smoother, and the entire world feels so much more vibrant and interesting.

Playing Skyward Sword again with these new changes made it so much easier to see all the amazing elements that this title holds. Enemies, bosses, items, and dungeons here are absolutely some of the best the series has ever had, plus now the controls are so much tighter and more reliable with good options for everyone (except left-handed people). The story is also a remarkably emotional, funny, and endearing one, with Link and Zelda being the most animated they’ve ever been, and even lesser characters like Impa or Groose getting plenty of screen time, and some real character development. But sadly, a lot of the tedium present in the original Skyward Sword is still here, though I’m not sure how you could fix most of those issues without a ground up remake. Still, Skyward Sword HD vastly improves the rhythm of this game and the ways you control the action, bringing this wonderful story to life. If Breath Of The Wild was your first Zelda game this might be a sharp turn for the series, as it’s so contained and restrictive, but it’s still a rewarding experience and features many examples of just what makes The Legend Of Zelda such a beloved series.

Some smart changes to controller issues and pacing problems make this the definitive way to play this classic Zelda title. But sadly, some repetitive elements and backtracking haven't changed at all. However, with an engaging story, well-realised characters, and some brilliant items and dungeons, Skyward Sword HD is a delightful adventure for fans of the series and beyond.