The last hunter journeys to an island at the edge of the world, hoping to lift a curse that’s spreading from it. It’s a story that can’t help but remind me of the Studio Ghibli film, Princess Mononoke. Just as in that film, The Pathless follows a hunter who travels to a land where humans and gods co-exist, but have recently fallen foul of each other, as the so-called ‘Godslayer’ has corrupted and transformed them into demons. Just like Ashitaka, your role is to cleanse this corruption, and restore balance to the world.

The comparison doesn’t end there, either. Whether it’s the speedy action sequences as you chase demons, firing arrows, or the indie game trope of a battle against light and darkness, purity and corruption, The Pathless treads ground we already know, while also splitting off into new territory.

But let’s start with the basics, shall we? The Pathless uses dual stick control, with one stick dictating movement, and the other controlling the camera. However, the camera is super intuitive, and I rarely had to even use it. More often, you’re going to be using that side of the screen to fire arrows, a key aspect of the game’s movement system. As you sprint, by holding the movement stick as far forward as possible, it depletes energy, but you can replenish this – and even get a speed boost – by firing arrows at targets littered across the island.

I think this system really shines in the high-speed action sequences, and demon chases, which feel almost akin to Shadow of the Colossus, but I was less enthused about it when exploring the open world. It seems like a bit of an irony that a game called The Pathless uses a movement system primarily based upon markers, and it makes the island appear a little too much like an archery range. But it doesn’t massively affect the game’s beauty, and building momentum and speed is satisfying. 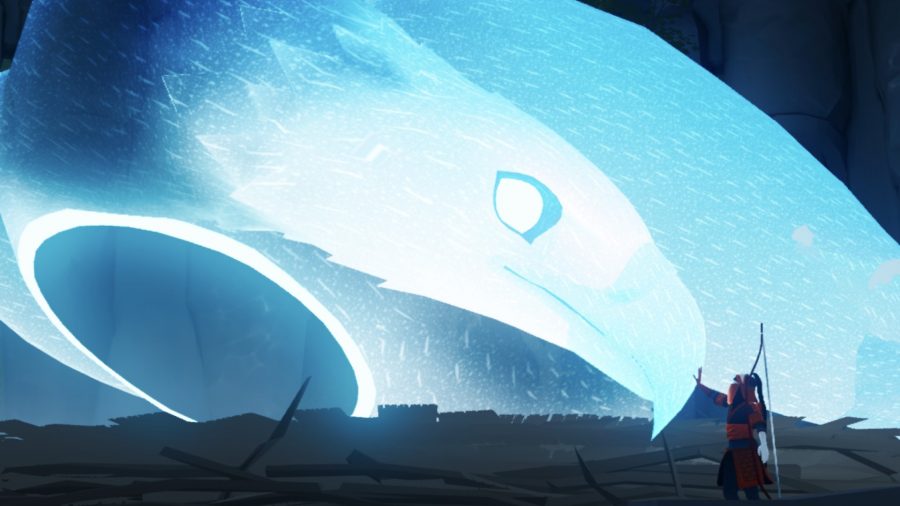 You mainly use the movement system to travel between the island’s regions, each home to a god that has transformed into a demon. First, you have to cleanse the towers, which you discover using your spirit vision. To cleanse them, you need to find all of the god’s golden icons, and place them in each tower. You mainly accomplish this through puzzle play – using your bow, movement, and your eagle companion’s ability to lift heavy objects to solve each puzzle.

The Pathless is beautiful, and a pleasure to explore for the sake of exploration

But be warned: the demon can catch you, which initiates the scariest game of what time is it Mr Wolf ever, as you search for your lost eagle, and try to hide. If you manage to purify the towers, you then fight the demon, and these sequences are where The Pathless is at its best, as you use movement and arrows to defeat each one. 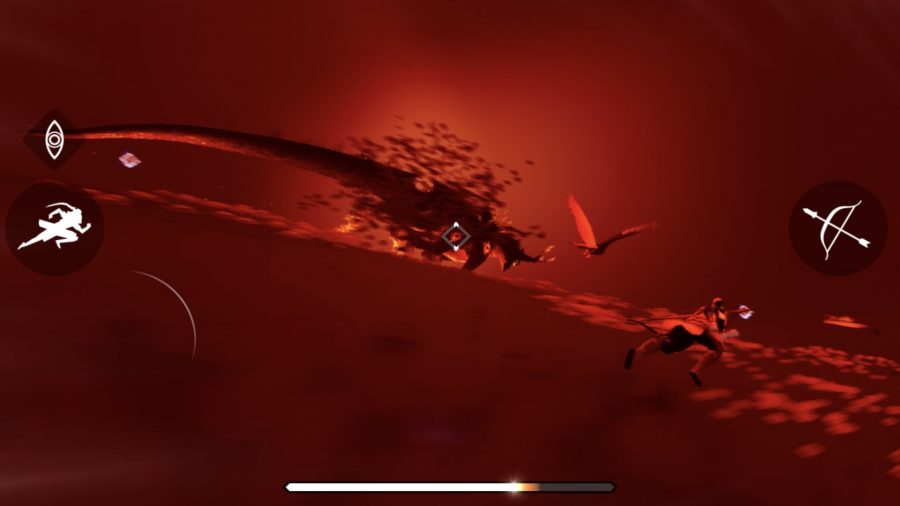 Can you pet the Eagle?

Not only can you pet the eagle, but it becomes a significant aspect of the game in its own right, as you use it to fly, carry heavy objects, and just generally do your bidding.

It’s a decent formula, and one that will be familiar to anyone who’s completed a Zelda dungeon. That’s kind of what The Pathless is, really: a giant open-world Zelda dungeon where you complete puzzles to get the opportunity to fight the boss. Not that this is a bad thing, as it’s a solid formula, but besides the scenery, the world of The Pathless is fairly empty. I think some players more used to triple-A games and mini-maps filled with icons may struggle if they step off the path, so to speak.

There are lore entries scattered around the world, but they feel very on the nose. When I first arrived on the island I was intrigued by the idea of the Godslayer, and the character’s motivations, but then he showed up in the first five minutes, killed a god, and felt like a typical villain. While The Pathless really sets itself apart with its action sequences, its main plotline does feel a little bit indie-game cliche. 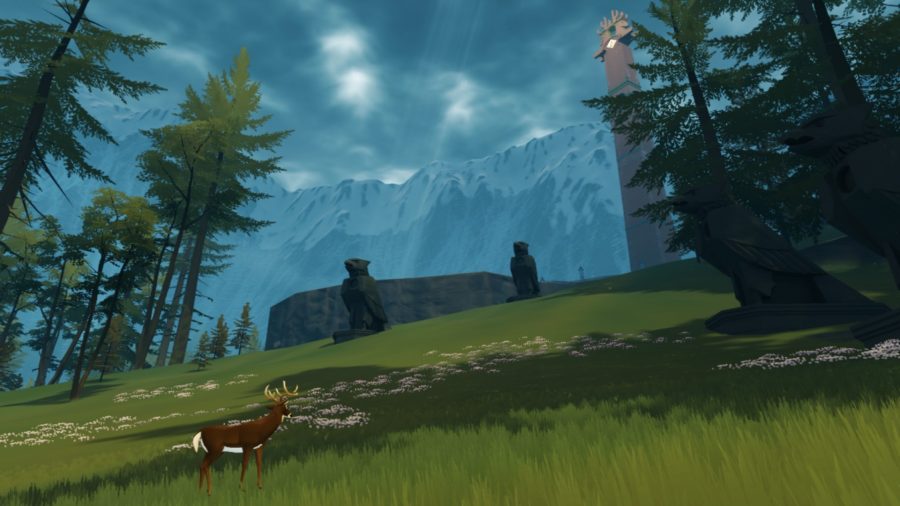 Whether we’re talking about the trope of the giant structure looming in the distance, the talk of restoring natural balance, or the battle between corruption and purity, it feels like a plotline we’ve seen from so many other indie games before. But luckily, the plot doesn’t really feel like a key component. There’s a curse, you’ve got to lift it, end of story. The Pathless feels like an understated game, and though that can be a detriment on console, I think it becomes an appealing quality on mobile.

The island itself may be ’empty’ in the sense of the usual side-quests or map markers, but it’s incredibly beautiful, and just as in No Man’s Sky, your exploration and what you gain from it are entirely yours. I think the simplicity of the puzzle formula, and control sequence are also endearing qualities for this platform. 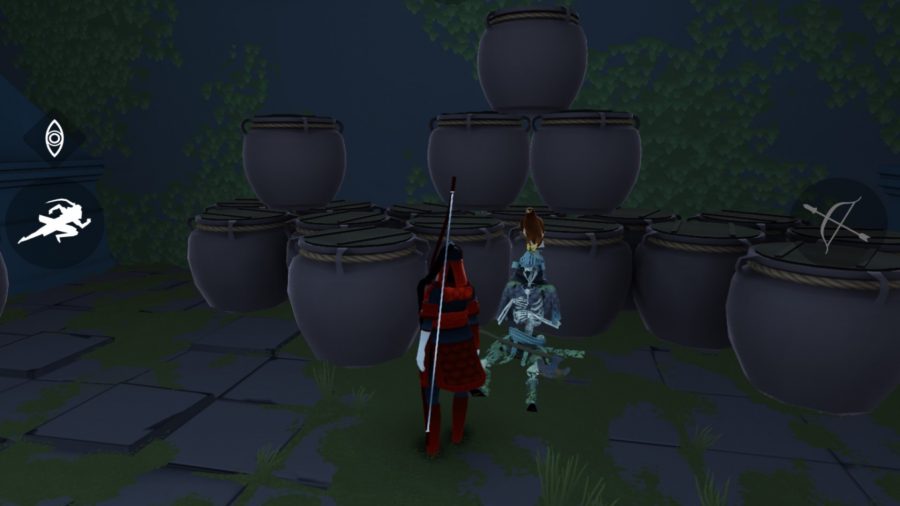 So, while it might be a little light on extra content for those used to open world triple-A games, The Pathless is beautiful, and a pleasure to explore for the sake of exploration. I may also have issues with the target-based movement system when in the open-world, but it’s hard to criticise when it’s used to such excellent effect in the game’s stand-out action sequences.

I don’t think The Pathless is the incredible, revolutionary indie game that Apple Arcade seemed to be touting it as, but it’s definitely a decent experience for any willing to take the leap.

You can play The Pathless on Apple Arcade.

Though it treads old ground at times, stand-out action sequences and appealing simplicity make it hard not to enjoy The Pathless