As a fan of both the otome genre and the Warriors series, I was so excited to hear that Koei Tecmo’s Omega Force and Ruby Party were uniting to bring us Touken Ranbu Warriors on Switch. While I’m not the most familiar with the Touken Ranbu IP due to it garnering nowhere near as much attention in the West as it has in Japan, a cursory look into this magical world had me enchanted, and I couldn’t wait to dive into a 3D action adventure in this wild, time hopping world with the handsome cast of Touken Danshi.

The story follows a group of tsukumogami (tools with spirits), the Touken Danshi. They’re blades awoken by the Saniwa (sort of like sages), tasked to travel through time and defeat the History Retrograde Army who seek to alter history. Basically, you take control of a bunch of very charming, very handsome lads, who are actually magical swords, as they travel through time, fighting monsters who want to mess up the history books. Throughout all of this, you’re led by an adorable little fox-like critter called Konnosuke, who has boosted the Touken Danshi’s combat abilities to help you on your mission to kick some butt.

Okay, so the story seems a little wild, and at times a bit silly – but, honestly? I love that. It’s lighthearted and fun, and allows for some unique timey-wimey jiggery, where you’re zipping through different eras, making sure that the history you’ve come to know is maintained. While not entirely unique (nor truly explored to the fullest extent, in my eyes), this wonderfully weird premise leaves plenty of room for you to get familiar with the large cast of Touken Danshi, and throughout my time sweeping my swords across massive 1vs1,000 battlefields and bemusedly sitting through cutscenes, I truly grew to care for this charismatic crew.

When it comes to the visuals, Touken Ranbu Warriors is a thing of beauty. Every little detail, including the load screens, menus, and UI, displays a gorgeous and cohesive aesthetic. The cutscenes are beautifully rendered, with each character bathed in light and stood amidst a swirling shower of sakura petals – a motif any otome fan should be very familiar with – and even the menus and UI display a clear eye for detail. 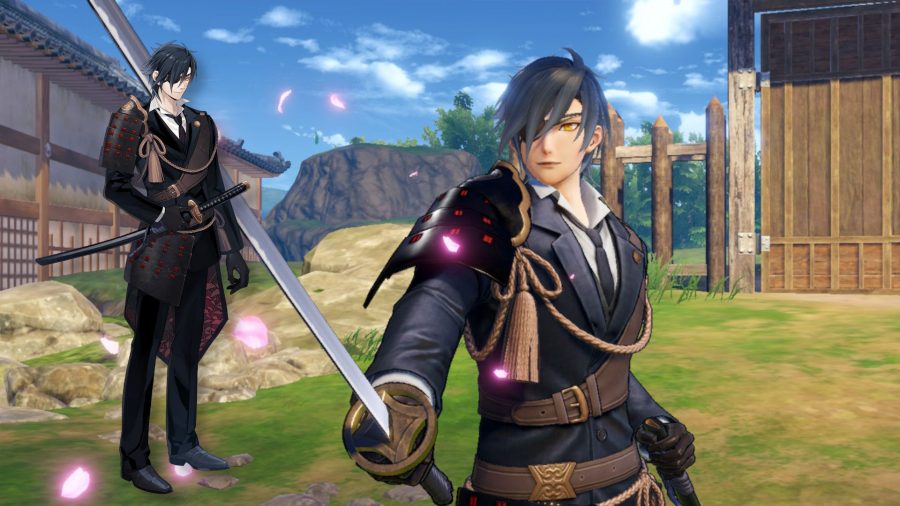 Touken Ranbu Warriors is a thing of beauty

In my opinion, some of the character designs do show a bit of disconnect. For example, comparing the dainty, wide-eyed characters like Namazuo Toushiro and Hyuga Masamune with the tall, imposing yet elegant figures of Okurikara and Mikazuki Munechika feels like you’re looking at models from two different games. However, the original Touken Ranbu TCG features illustrations painted by a wide variety of artists, each with their unique style, and translating that to the 3D realm is no simple task. And, despite some hiccups, it’s clear there was a conscious effort made to maintain cohesiveness while still remaining true to the character designs fans have come to love.

Regardless of the small level of disconnect, I personally found Touken Ranbu Warriors to be truly beautiful throughout. Character models have unique colour schemes, hairstyles, and elaborately detailed costumes, all of which illustrate their personalities well. The environments are gorgeous, even with the restrictions of the Switch, and show great variety. Whether you’re wandering through serene, sunlit countryside lanes adorned with vibrant flowers, or slashing your way through shadowy, ransacked villages, simmering against moody, purple backdrops, the maps were a joy to explore. 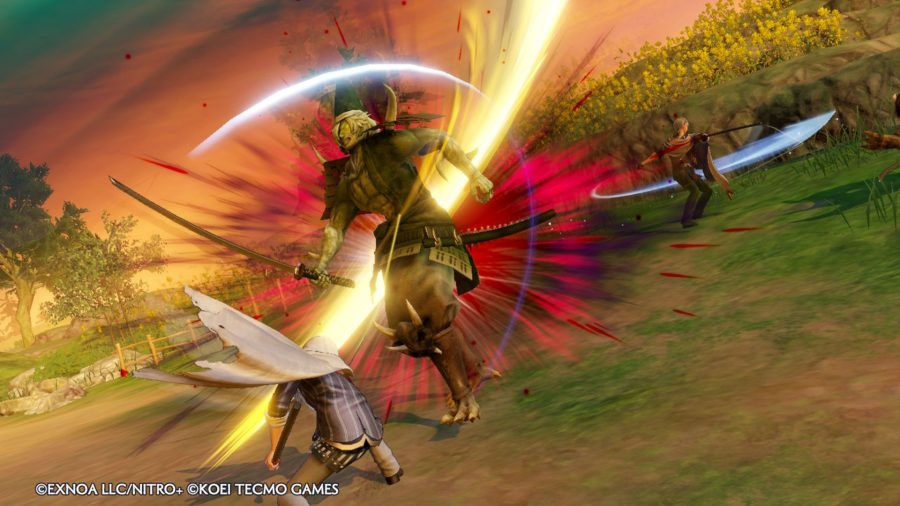 Then there are the enemy designs. Far from the grounded opposition seen in previous Warriors titles, where you’re battling through human troops and historical figures, Touken Ranbu Warriors pits you against the History Retrograde Army. The battlefields consist of lizard-like skeletons with swords in their mouths, shadowy ninjas, gruesome goblins, giant bugs, and great, hulking ogres. While these out-there, fantasy-themed baddies may not tick everyone’s boxes, and they sometimes lose impact after fighting so many (a common problem in musou titles), I personally loved their designs. Plus, the juxtaposition of these shadow-cloaked beasties against the flawless-skinned, elegantly dressed Touken Danshi only made our fighters all the more striking.

The gameplay of Touken Ranbu Warriors is decidedly stripped back when compared with previous Warriors titles, and while it may not offer a challenge to those of us well-versed in the musou genre, that clearly wasn’t its intention. It’s a game designed to target a new audience, and as such acts as a great entryway for anyone picking it up for the first time. At the beginning, it offers you two modes – easy or normal. The easy mode description states, ‘you can enjoy performing flashy actions by simply tapping A’ and ‘the enemies can be defeated easily, and the story can be enjoyed at a leisurely pace’. On the other hand, regular more informs you that ‘all actions are assigned to their own buttons. This mode is recommended for those with experience playing action games’. 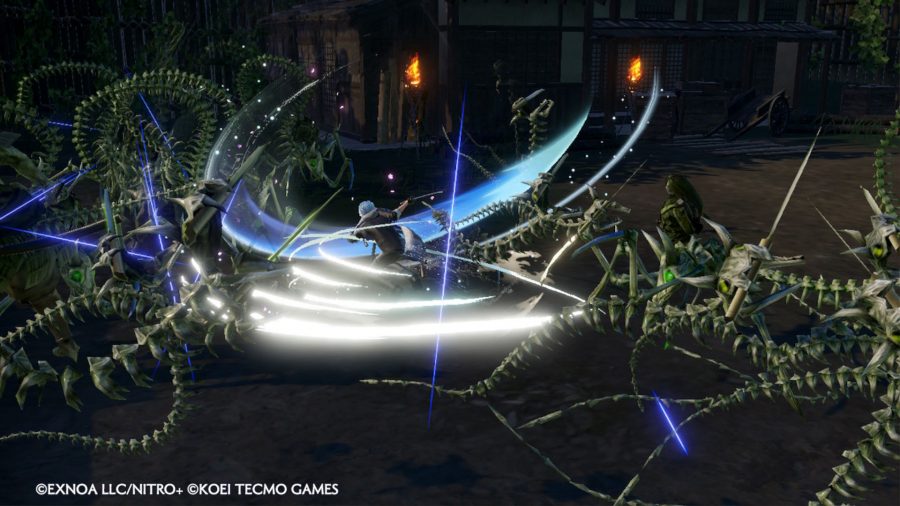 Honestly, I picked normal mode, and I wouldn’t say you needed any real experience with action games even on this difficulty. There are simple combos to explore, special attacks that rely on which combo you used, and a charge metre that allows you to unleash a powerful, flashy ability when full. While the type of special attack you unleash does rely on the combo you did beforehand, you can also hold the right shoulder button to open a radial menu and manually choose which one you want to use – usually the difference between ranged or close-quarters. The mechanic is somewhat novel, but with how powerful your attacks are and how easy your enemies fall, it doesn’t take much more than a bit of button mashing and a few well-timed dashes to charge through any mob unscathed.

In addition to your usual combat, there’s also a buddy system in most maps, where hitting LZ summons the partner you selected at the beginning of the match to fight alongside you, controlled by the AI. This is a nice touch that allows more screen time for the Danshi beyond the one you’ve selected, and adds to the general sense of unity between each of the teams. 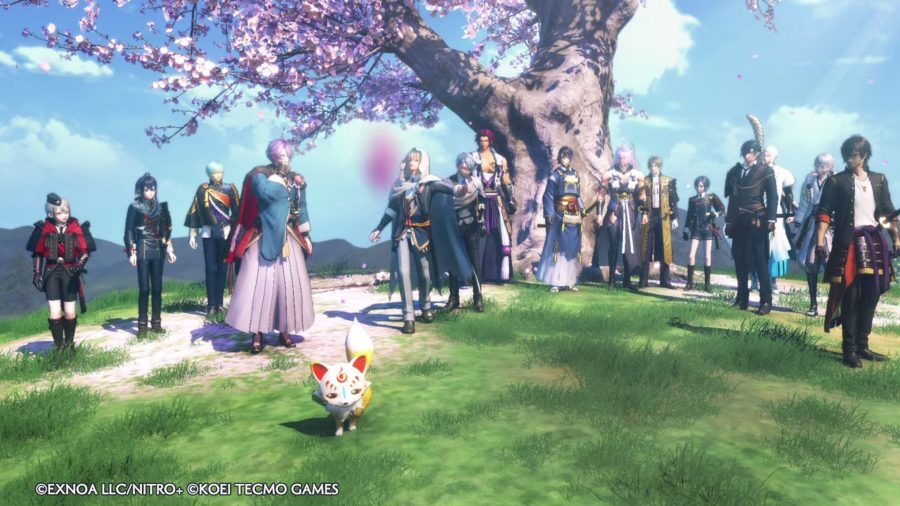 When you start the game, there are only marginal stat differences between each of the Touken Danshi, meaning you can pick your favourite (or the one you think is the cutest) without much impact on your gameplay. They also all have their own unique special abilities and animations, with slight differences between their combat styles, though there’s not much variety in weapons, making several of the Touken Danshi feel pretty similar to play as.

While the character you take into the field does gain experience and level up, you can also farm experience for the ones you aren’t using by deploying them within your base. This means you can try out all of the characters, or simply focus on a few of your favourites, without worrying about leaving one behind and having to grind EXP for them later. On top of that, there’s a nice range of minigames and a photo mode in the base to break up the combat, which is a welcome touch.

With all of this, despite the combat being simple and the levels being pretty short, I never found myself getting bored. The attacks are flashy and impressive, each hit feels impactful, and there’s usually enough going on that I felt constantly immersed without getting overwhelmed. 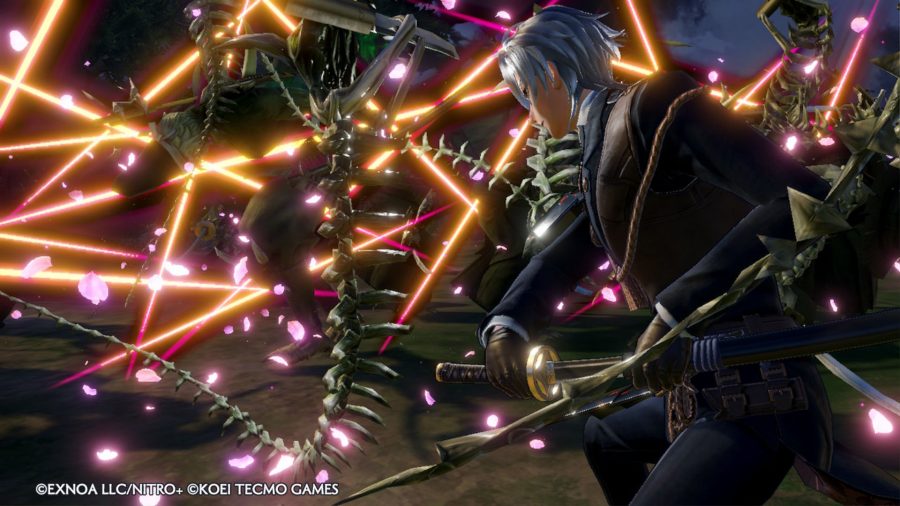 If you do, for whatever reason, struggle with any of the mechanics or combos, you can access all the tutorials you’ve unlocked so far from the menu. There’s also a nifty online guide with video tutorials, which you can access through a QR code in the settings menu. I thought this was a very nice, player-friendly touch that makes the game all the more accessible to beginners to the genre.

It’s beginner-friendly, aesthetically gorgeous, and the characters are charming

Even beyond these thoughtful tutorials, the settings menu is thorough and offers great accessibility. First and foremost, subtitles are turned on by default, but in addition to this, you can control message speed, battle hints, vibration, auto lock on, and more. You can also adjust SFX, voice, and music levels separately, and can toggle HP bars to show for all enemies, just strong enemies, or turn them off.

There’s also a glossary, where you can look up the unique words and terms used throughout the game, so you don’t get lost in the story. These types of options, once again, make the gameplay more accessible to a wider audience, and allow you to customise it to your own personal preference, and I’m happy to see them present in this game (though they should honestly be a standard across all games by now). 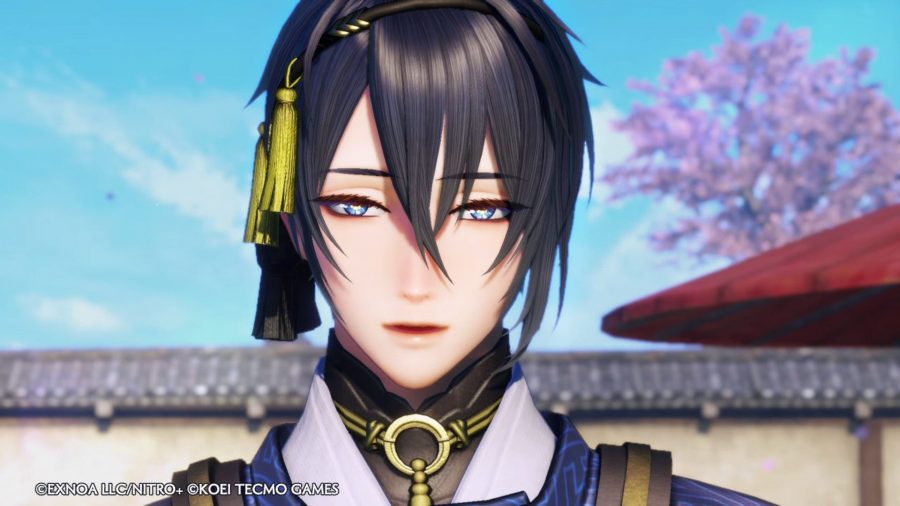 Touken Ranbu Warriors also has a sublime soundtrack. I adored the Japanese voice acting of the Touken Danshi, and felt every character had a voice that fitted them perfectly. The sound effects through combat and menu selection help make each click of the button feel impactful, and the OST is honestly gorgeous. The whimsical wind instruments and heavy strings of the full, Japanese-style orchestra never fail to give me goosebumps, and the sound loops are long and varied enough that, even throughout long gameplay sessions, I didn’t find them repetitive or grating. In fact, I’d happily listen to these beautiful pieces while working or cleaning the house.

Unfortunately, there’s only one save slot, meaning you have to start over if you want to experience the beginning of the game again, or if your pal or family member wants to try it out on your account. I’d also like to have seen a co-op mode like in previous Warriors titles, where you could have a friend either join you locally or online, but that’s just personal preference. 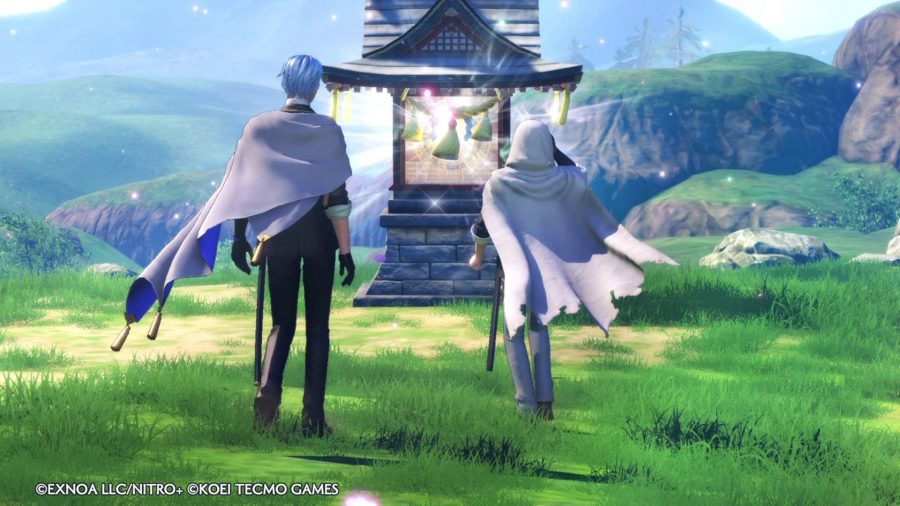 Overall, I genuinely love Touken Ranbu Warriors. It’s not anything new to those of us familiar with musou or the Warriors series, but it offered enough variety and interesting mechanics that I was thoroughly entertained. It’s beginner-friendly, aesthetically gorgeous, and the characters are wonderfully charming. And, while I may hold some unconscious level of bias after talking to the passionate people who worked on the game, I can certainly feel the love and attention poured into every facet.

Do yourself a favour and give the free demo a try, I don’t think you’ll regret it. Now, if you’ll excuse me, I’ve got a Honmaru that needs protecting.

Touken Ranbu Warriors is a wonderful entry point for anyone new to the musou genre, with stripped back but enjoyable combat, flashy animations, and a host of stunning maps to explore. While it may have its imperfections, its aesthetics are spot on, its sound design is lovely, and the Touken Danshi are each as charming as the last.