Versus: Unfriendly Frenzy has a rhythmic name that just rolls off the tongue, and its gameplay is every bit as dynamic. The play experience is zippy and the theme is zany if a little vacuous, but the strategy is ultimately flat. This ain’t Civ 5, folks, and it was never meant to be. As a series of rapid-fire tactical skirmishes, Versus shines, as it also does with local multiplayer (if you’re looking for more local multiplayer experiences, check out our list of the best mobile two player games). It has clearly been well-polished and is quite fun, but the lack of depth in decision-making and interactions makes the overall experience middling.

It’s real-time strategy in a lightweight sense; two commanders duke it out on a single-screen map by spawning units down the lanes of the map. These forces march to the other side of the battlefield, fighting any enemies they come across and ultimately damaging the base if left unopposed. Every one of these units costs energy, which regenerates automatically over time. Your leader can be re-positioned and becomes the spawn point for any or all new units. Honestly, that’s 90% of the game, so it is practically pick-up-and-play accessible.

There’s a lot more where this came from too, which you’ll soon learn if you check out our list of the best mobile strategy games.

I suppose because Starcraft and Warcraft cast long shadows, there are three factions. There’s some notional asymmetry amongst them: the Circus, Muscle Faeries, and Junkyard. Each one has a roster of six units, three (or rarely four) of which must be selected as a squad. Some are area-of-effect attackers, others demolish buildings quickly. There are tanks and glass cannons alike. It’s a bit like throwing rock-paper-scissors to finagle an advantage in a match, for the melee/ranged/flying match-ups serve as soft counters to each other. Standard stuff, nothing fancy or wrong with it really, just a tad uninspired. To be fair, the visual and thematic design is kitschy and eclectic, so at least the aesthetics are colorful.

The extensive single-player campaign does a thorough job parceling out how everything works in stages. It gives tutorials on different units, win conditions, terrain effects, and power ups, and moreover separates these new elements into their own missions. A generous interpretation to this campaign structure would be to say it onboards the player gently and has a leisurely difficulty curve. The cynical take is that there’s more padding here than mechanically unique challenges.

As ever, the truth is somewhere in the middle. While the campaign storyline does follow the quest to steal and use the Pixie Protein Powder to revive ‘dark magicks’, it is constantly jumping around point-of-view and setting. New cartoon characters are introduced and dismissed rapid-fire, and the missions are generally beaten using the exact same operating procedure. It’s a fever dream, yet also dreary at times.

Seize power ups early, increasing your force’s power level, and consistently turning the tide of battle in your favor. That’s it. The specifics of faction matchups and squad composition are only of trifling concern. If ‘strategy’ means long-term planning to you, implying some overarching ambition and design, then Versus is a weakling in terms of strategy. It is, however, tactically intense. Because of the obstacles and unpredictable spawn behaviour of those power ups, timing and quick wits are crucial.

A flurry of micro-skirmishes between forces proves pivotal, so to master those, you have to position your leader correctly and tap the right mixture of units in the right window of opportunity. Unfortunately there is no real way to micro-manage the flow of battle beyond this. Contrast that with, say, Iron Marines, and you have a weird hybrid where battles are set into motion without much additional oversight or fine control. In this respect it strongly resembles a lane-pushing or tower-defense game.

The theme of the game, as well as its overall presentation, is clearly Saturday morning cartoons

The single game element that keeps Versus from getting totally stale is the power-ups. There are ones which beef up a unit type’s health, speed, or attack, but there are also one-off ones, which can freeze the enemy commander or create a super-unit. Power-ups have to be used manually, and while the unit stat upgrades have the longest tail of influence, the short-term ones are no joke, either. They are decisive and unpredictable, so they keep the game from becoming a tedious overlong tug-of-war match. It’s a mid-range objective to give additional momentum, and the trick works. 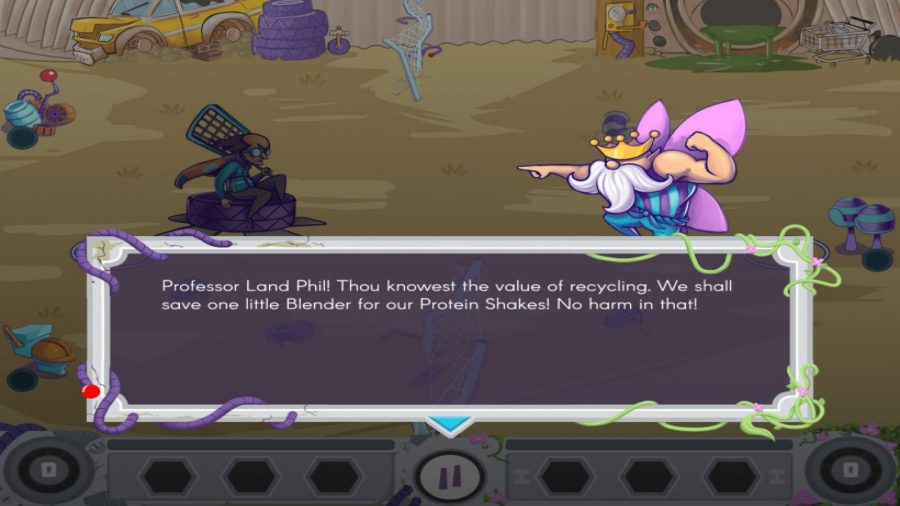 The theme of the game, as well as its overall presentation, is clearly Saturday morning cartoons, and they hit that aim. Each faction has a few key players and personalities, all of which bicker and quibble over every little thing, just as a way to generate dialogue to break up the battles. Heavy dialects drive home how unsubtle the whole affair is. The story, much like the gameplay, is best digested by kids.

Some good news: the multiplayer is a standout and somewhat redeems the rest of the game’s weaknesses. Finally, all of the simplicity in design and inputs makes perfect sense: how else can you manage local multiplayer without split screen? It’s about as good as it gets in this limited format, though the strategy fiends would be infinitely better served by a pass-and-play game, and this feels more like an RTS game for parties. 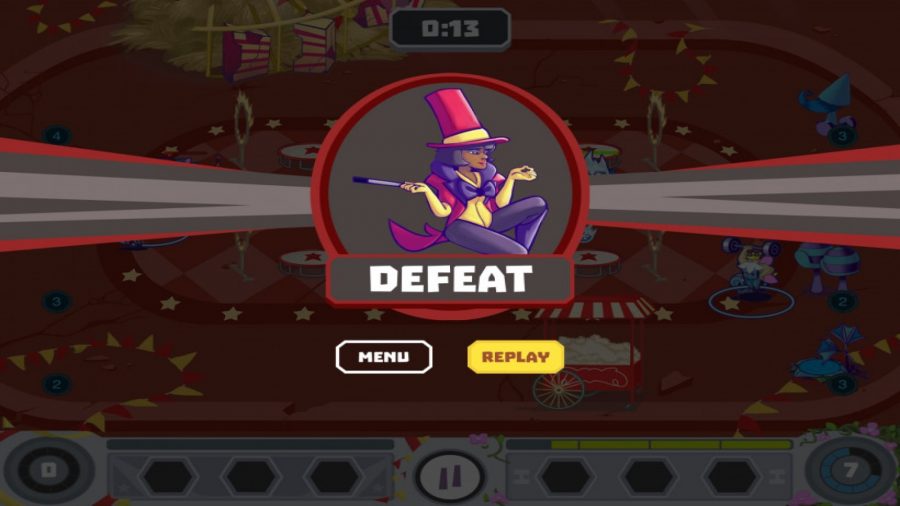 ‘It’s a bit rubbish, but I can’t stop myself from playing’. This phrase is a tidy bit of unfair rationalisation, used as a preface to diminish every single so-called guilty pleasure. It leapt to mind several times while playing Versus: Unfriendly Frenzy, and though the game is well-made, it quickly runs out of interesting things to say or do. The guilty pleasure here is that of an easy, familiar challenge, and it is easy for any gamer to simply enjoy Versus, which for all its faults is at least well-executed.

As a routine or background action, the battles are pleasurable enough, but the game demonstrates how difficult it is to straddle that fine line between simple and simplistic. For someone just looking to blaze through the game in a few hours and leave it behind with only dimly pleasurable hazy memories, it is perfectly adequate, but for long-term play it isn’t a keeper.

This whimsical, quick-playing game is not quite as merry or witty as it would like. Versus: Unfriendly Frenzy has a good introduction but lacks staying power.