The thing that first got me into Warhammer when I was growing up was a strategy game. Dawn of War was unlike any RTS I’d played before, and not just because of its distinctive setting and world-building. It felt like Dawn of War was far more than just the Warhammer IP, and was an excellent strategy game in its own right. It’s the reason I’m into Warhammer now, and am still working my way through the Horus Heresy books.

Fans of Warhammer have had to get used to Games Workshop being somewhat frivolous with its IP. We have great games like Total War: Warhammer, Vermintide, Gladius, and Battlefleet Gothic. But for every good game, there are a plethora of others that just don’t hit the mark.

In some ways it’s great, allowing a whole range of developers to take their shot with the universe, but it also feels like a sad state of affairs, when some games are simply trying to piggyback on the popularity of the IP and its massive fanbase. I guess the important question to ask around the quality of Warhammer games is: what would this be without Warhammer?

Warhammer 40,000: Lost Crusade is in some ways the perfect example of that quandary. Based after the fall of Cadia, you take command of a battle barge separated from the Indomitus Crusade and lost deep in Chaos infested space. You have to rebuild your strength, and find a way to rejoin your battle brothers. It’s a great setup, and even though I do think we get way too many Space Marine focused games, I was excited to see some Primaris in action.

But in reality Lost Crusade is a pretty generic mobile base builder with a 40k skin. It features the exact same tutorial and structure that you’ll see in every other mobile base builder as you are introduced to those familiar elements: endless upgrades, clocks to rush, unit buildings, an over-map expedition system, alliances, and a gacha mechanic for pulling new heroes. You might call a building a ‘Promethium Refinery’ to make it 40k, but it’s still the exact same fuel building you’ll find in every mobile base builder out there. It even features that same chapter structure and intro cutscene followed by a jpeg baddie who threatens you then disappears. 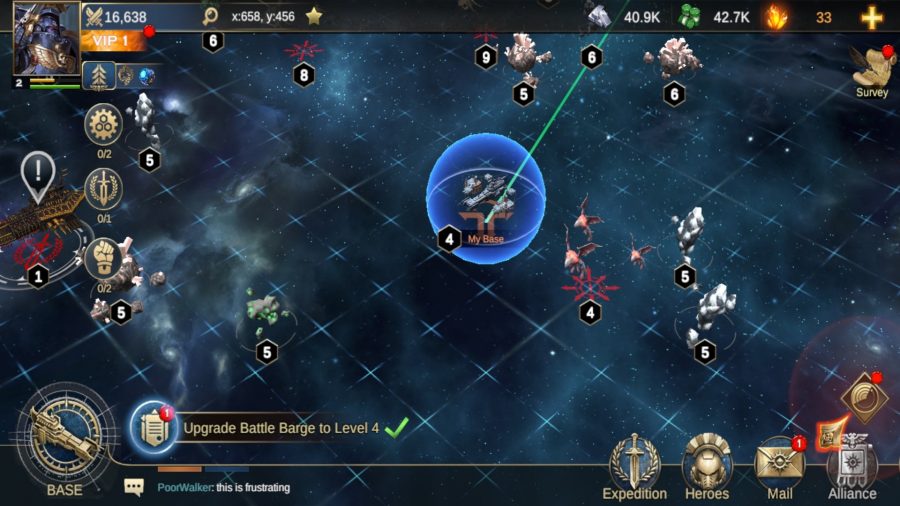 The only real redeeming features that I could find in Lost Crusade were its combat system and its heroes. While still an auto-battler like most other mobile RTS base-builders, Lost Crusade does add a few fun tactical elements. Whenever you start a battle, you have to push through layer after layer of enemy defences to destroy a Chaos rift before a time limit runs out. As you go, you accrue points, which you can use to activate hero abilities or summon new units from a selection of cards at the bottom of the screen.

In this sense the game feels a tiny bit like Clash Royale, with timing and how you allocate points playing an important part in achieving victory. The character abilities can also feel quite flavourful: your librarian has an area of effect psychic attack, your dreadnought can activate a powerful shield, and your demolition marine can fire a rocket. You can manually aim these abilities, or tap to auto-target an enemy group. 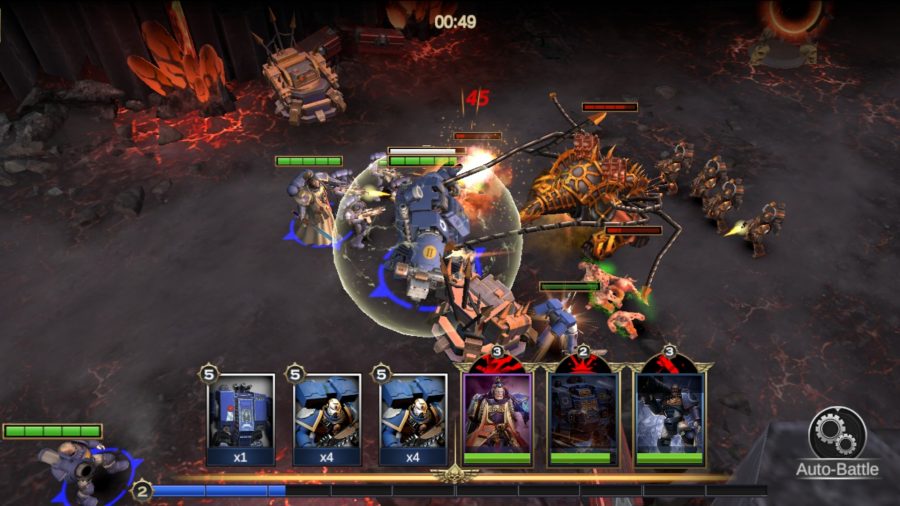 The characters you pull from the gacha mechanic ‘deep rescue’ are also quite varied. You have heroes like Tech Marines, Death Cult Assassins, Ancient Dreadnoughts, and plenty of others pulled from across the Imperium. There’s also a fairly extensive collection of enemy Chaos units; in the shot above you can see Forgefiend, for example. But Lost Crusade’s best tactical elements unfortunately end up feeling mostly negated by the usual power grind of levelling heroes and units. As with most mobile base-builders, it becomes more about number crunching and what you bring to a fight than actual real-time strategy.

Don’t get me wrong; if you love 40k and find the mobile base-builder format to be fun, I’m sure you’ll get some modicum of enjoyment from Lost Crusade before invariably moving onto the next. But do I think it’s a good Warhammer game? No. Going back to my initial point: what would this be without Warhammer? And the answer to that is just another average mobile base-builder.

Despite a few somewhat interesting battle elements, Lost Crusade is let down by its strict adherence to the mobile base-building formula