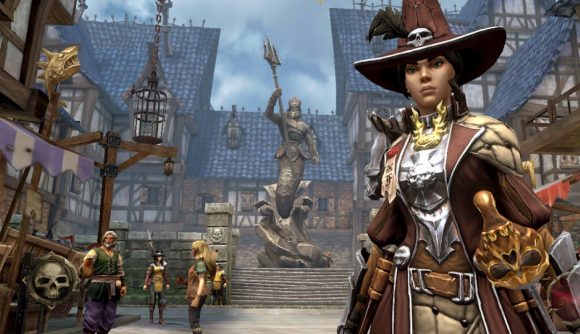 Upcoming mobile game Warhammer: Odyssey has soft-launched globally on Android and iOS. The fantasy MMORPG takes place in Warhammer Fantasy’s Old World and sees you exploring dark Beastmen-infested forests, and the bustling cities of the Empire. Another notable feature is that Warhammer: Odyssey doesn’t have autoplay, which puts it more line with PC MMORPGs than many of its mobile rivals.

The game has three playable races, each with two classes. Humans can play as either Witch Hunters or Warrior Priests, Dwarfs as Slayers or Engineers, and High Elves as either Archmages or Shadow Warriors. The main difference between these is generally a ranged vs. melee focus, but the game also has plenty of class abilities and weapons to use.

Odyssey first soft-launched back at the beginning of January and is developed by Virtual Realms, who some of you may know for the popular MMO Celtic Heroes. Since the game’s reveal, fans of the series have eagerly awaited more information to let them know when they can get their hands on it.

If you’d like to know more about Warhammer: Odyssey, you can find the most recent trailer below.

If you want to get started, Odyssey is available on Google Play and the App Store. As Warhammer fans we jumped right in, and it was enjoyable to meet a wide range of Warhammer characters and see the merchant city of Marienburg fleshed out.

If you’re looking for something similar to play, take a look at our list of the best mobile MMORPGs.