I’ve always loved how antithetical WarioWare is to Mario Party. A slow, methodical, and carefully explained game of Mario Party can be enjoyed by just about anyone. But Wario throws you in at the deep end, a new microgame every few seconds, and instructions appearing as a single word shouted at you, as more of a dare than assistance. So, after years of experiments with control methods, cameras, and some longer-formed games over on Wii U, WarioWare returns in all its glory on a home console, and is stripped back with a focus on buttons over motion controls or touch screen gimmicks. But does this purity still breed innovation?

WarioWare: Get It Together! brings back our favourite garlic-drenched antagonist and his cohorts for another round of insane microgames. You pluck armpit hairs, whizz out fires, hide from incoming teeth, and flip a turtle on its back, amongst many, many other things. Wario turns the mundane into madness thanks to the energetic presentation and demanding quickfire gameplay. The game sets itself apart from previous entries with one big change, you now control the characters interacting with the microgames.

You can control each member of Wario’s gang, and each has a different ability. While Wario has a jetpack and a shoulder barge attack, Mona has a scooter that can’t stop and a boomerang. Each character controls in a unique way, meaning that the microgames can be played in a huge variety of different ways. Some are more useful than others, with 18-Volt pulling himself upwards by grappling towards hanging rings, and Dribble & Spitz both only being able to fire in a single direction, though they’re designed for cooperative play.

Because of this, playing microgames doesn’t feel as immediate as I want it to. Not only was I frantically trying to figure out how to break out of a giant glass bottle, but I also had to remember my character’s controls and how they should approach the situation. In some microgames, despite each game-changing to accommodate every character’s unique skills, it’s obvious that some are more useful than others, and the mixture of controllable character and game can sometimes be disastrous. 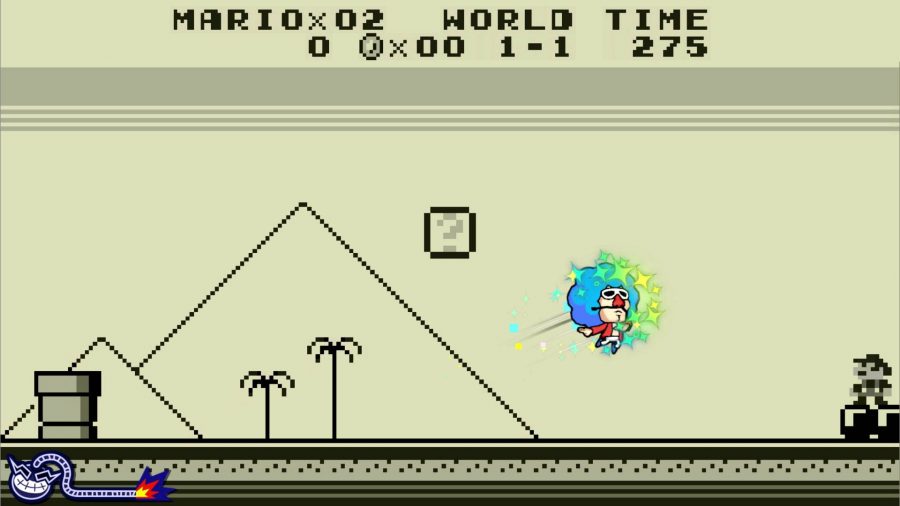 Luckily, once you’re through the main story mode, you rarely have to choose a character you’re not familiar with. Later you can choose from a selection of your favourites, and chase high scores with the squad you know and understand. Often modes make you cycle through a few characters, though no matter how familiar you are, there’s still a moment of disconnect when you look at a microgame and have to remember how a particular character plays. While it’s fun to experiment, you have to solve each microgame in seconds, so adding any additional hesitancy and confusion is occasionally frustrating. I love the idea of different controllable characters, and it adds a lot of new dynamics to the WarioWare formula, but it does seem at odds with the game’s simplistic and quickfire ethos.

some hilarious moments in the trademark frantic, gross style players know and love

Working through the main story mode unlocks all the main characters for you, with a huge variety available by the time you find everything. It’s a fun introduction to each character, and their set of mini-games, with enough variety to keep the campaign fun until the end. As always, the highlight is often the particular set of microgames based on Nintendo’s library of software, such as sending gifts in Animal Crossing, helping Samus find her goal in Metroid, or launching boxes in Breath of the Wild. There’s no real low when it comes to the themes of the microgames, but the Nintendo-based ones are always such a high, it has me begging for a larger focus on them, akin to what was achieved in NES Remix. 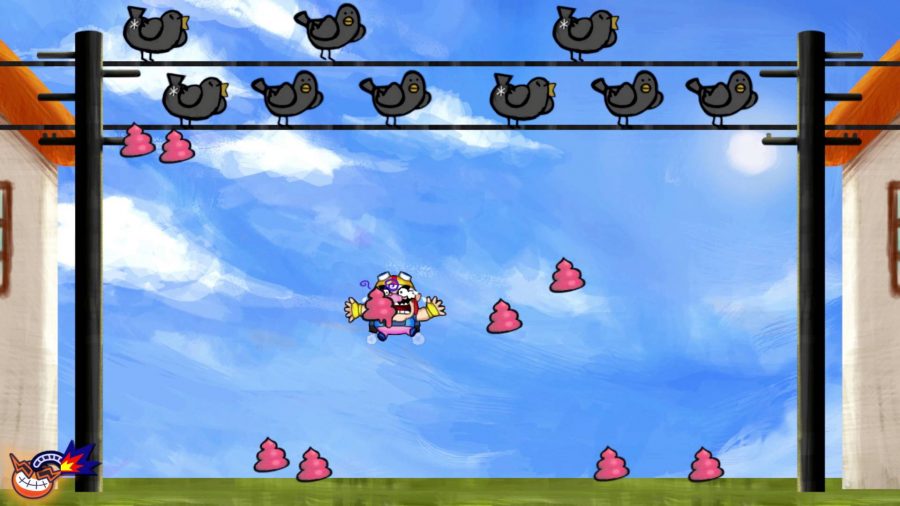 One thing that did disappoint, is that microgames here feel simplified to accommodate the different controls of each character. There are quite a lot of ‘move your character to avoid this’ or ‘pull x out of y’ that are ultimately very similar, and while the way many games are changed to work with different characters can be fun, I felt the ingenuity of earlier WarioWare games being slightly dulled here.

Luckily, thrills are still everywhere, as you can solve quite a few of the microgames in different interesting ways. One microgame demands knocking a wrecking ball to destroy a house, but you can also use Wario’s shoulder attack to demolish the house if you choose. There’s an odd mixture here, as the microgames are both slightly simpler yet more demanding. Still, this is WarioWare, and the standard is still incredibly high, and at the very least, the 200 games have some hilarious moments in the trademark frantic, gross style players know and love. 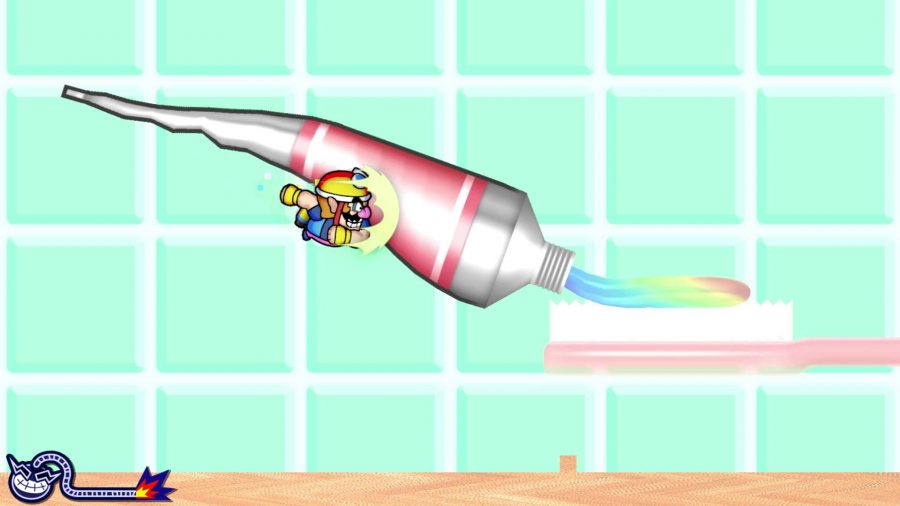 There are a few different modes to dip into as well, luckily, as the main story mode is quite short. Over in Variety Pack, there are a series of mini-games, some of them longer versions of the microgames, and some of them completely new. Games like Gotta Bounce (basically keeping a ball in the air) are fun ways to experiment with the different characters, and Daily Grind is a fun little 2D platformer adventure where you can earn more points by swapping characters more often and collecting items.

The party modes also bring some spice to multiplayer, adding some fun twists to the formula and upping the tension in competitive battles. Modes like Sly Angle see you compete in the normal frantic microgames, with the winner placing flags in a strategic battle for territory. There’s so much here to dive into, and multiplayer has probably never been better in WarioWare. As long as you can quickly convey each character, and their abilities, there’s a wealth of different ways to enjoy the many, many fantastic microgames in this game. Unfortunately, It’s fairly unfriendly towards newcomers, because of the things you need to explain, but when you’re all on the same page, it’s exactly the right sort of hilarious chaos that only this series can create. 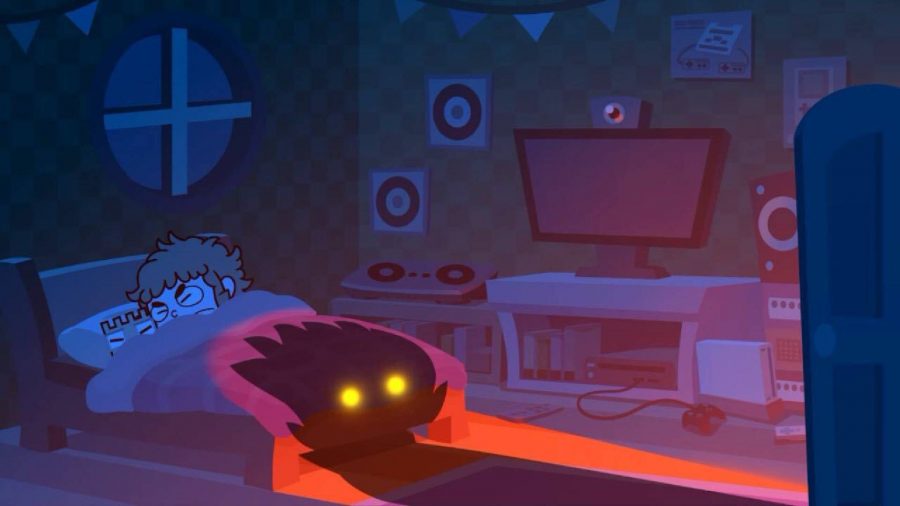 Fans of the series will also be happy to know, there’s a lot of depth to the overall package. Playing through the main story mode, and most others, will earn you coins. These can eventually be spent to buy new outfits and customisation options for each controllable character, in a roundabout way. You can actually buy food items in a gacha mechanic, spending 1,000 or 5,000 coins to pull items of different rarities.

Each character prefers certain items to others, but you have to feed them to find this out. While I really appreciate the customisation options, I would love to be able to just purchase them. There’s a little bit of fun trying to pull rarer food items, and then finding out if your favourite character likes them, but, the coins are fairly hard to earn, so it stings a lot when you give a character a rare item only for them to not be fussed.

Luckily, you can also earn coins by completing missions, which amount to basically WarioWare’s version of achievements. There are lots of missions, so as you play through you’ll easily start ticking them off, and it’s a great way to incentivise experimentation in every corner of the game. The missions also explicitly lay out some of these challenges, such as finding a way to stop a tap in one microgame without touching the faucet. It shows that the true aim of this WarioWare is to encourage experimentation, and while I have my issues, it’s fun to return to a microgame and play around with the characters until you discover something new. 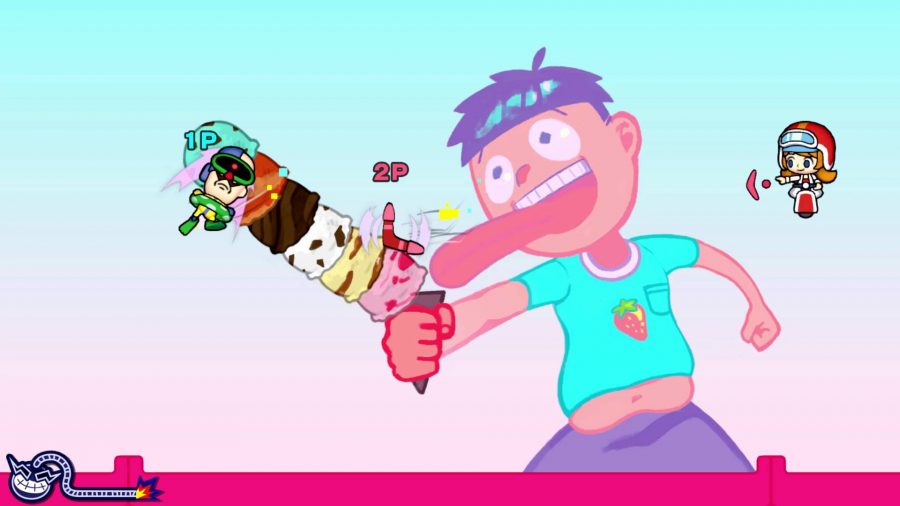 Then there’s the Wario Cup, a weekly challenge that offers a series of microgames with specific limitations, such as only being able to use certain characters, and offers huge coin rewards depending on how high on the scoreboards you can climb. These are fairly tough, so using your favourite characters becomes a huge boon, either way, the real stakes it adds to the collection of microgames made this my favourite mode to return to.

Multiplayer also needs a mention, as it’s obviously a focus. It’s been implemented fantastically, with local co-operative working seamlessly in the story mode and beyond. Some of the characters are made to be controlled together as well, such as the aforementioned Dribble & Spitz, or Kat and Ana. They have complimentary powers such as only being able to shoot left and right, respectively, and it’s a fun way to interpret the characters and their abilities. Obviously, you can also end up with some really weird combinations, but it only serves to further the chaos. Every mode in the Variety Pack can also be played with a few players, so there’s plenty to do either co-operatively or competitively.

Finally, I want to mention the presentation, as this is Wario’s first real HD outing. The character models have been swapped from sprite’s to 3D models, and it’s a weird mixture of successful and slightly disappointing changes. Wario looks perfect, but some characters, like Jimmy, seem to have been oversimplified or lack some of the character seen in earlier titles. All the actual microgames have the classic hand-drawn style, and the slapstick humour and gross designs all look fantastic in this new entry. 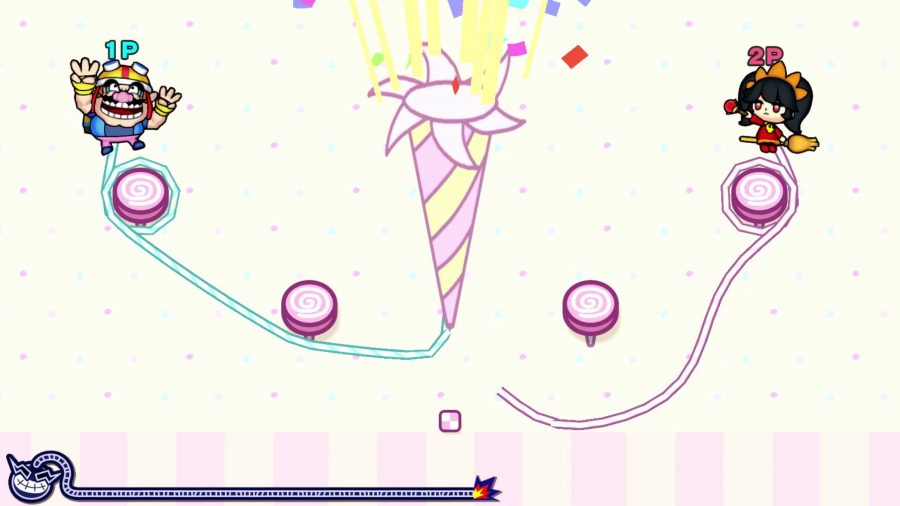 Especially impressive though is the music, which could be the best the series has ever had. Playing through the story mode you’ll encounter every character’s theme tune, with some being absolute bangers. They work dynamically with the microgames, so when you win or lose the game reacts accordingly. It’s such a smart twist on some already great music, that adds to the cheery spectacle of each microgame and mode. Even the menu music had me bopping my head, laughing as Wario’s bulbous nose squeaked along to the beat.

WarioWare’s first home entry in years certainly has a few issues. I feel the experimental nature of the many characters and their abilities actually work against the immediacy and madcap scramble of gameplay that I normally love about the series. But after a few rounds, and deciding my favourites, I found myself getting obsessed with testing each microgame and seeing just how many ways there are to crack each one. Sharing the fun in multiplayer is also an absolute blast, as long as people can get their head around it all, and the fantastic style of the microgames and dynamic, relentlessly peppy music elevate even those moments of clumsiness.

WarioWare: Get It Together review

Despite some minor issues, WarioWare has never been better, and the joy of experimentation, fantastic presentation, and a wealth of options and unlockables, means there’s a veritable treasure trove that fans of the series will happily plunder for months.