Now, let’s get into the XC3 combat breakdown. 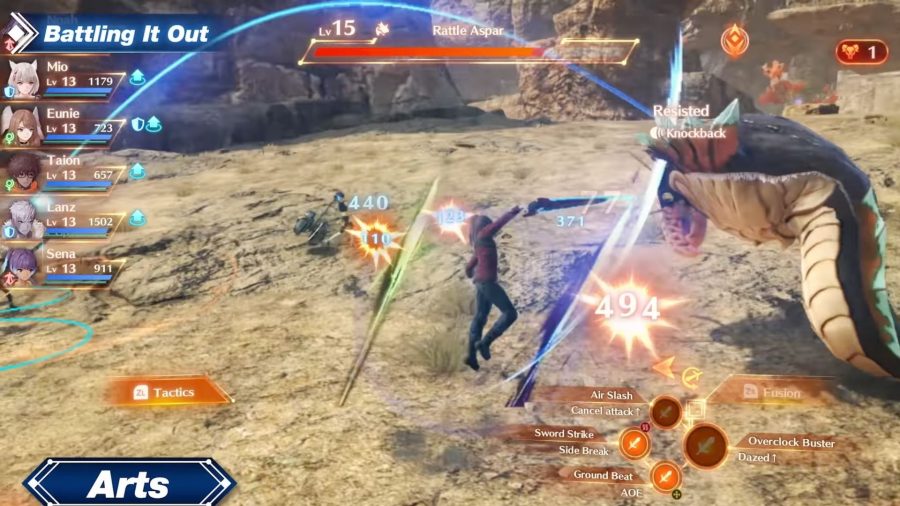 Basic XC3 combat is actually automatic, just like in the previous games. While exploring, you draw your weapon and seamlessly enter battle. The weapons you use, called Blades, are actually materialised by the character.

You can push in the right stick to do a dash, too, helping you better position yourself to make sure your auto-attacks are still within range. This can help with arts that require you to attack from a certain position, too.

Arts are more powerful attacks with buffs and debuffs, some of which can heal, while others require you to attack from a certain angle. Some can also knock down an enemy, using the break/topple/daze combo from previous games, here again in XC3 combat.

Different classes have different arts and also different roles. You can swap around your characters’ classes, so there’s buckets of freedom to experiment in XC3’s combat. Check out our Xenoblade Chronicles 3 classes guide to find out more.

As you earn experience you move up your class rank. This allows you to learn master arts, which are beneficial arts that can be added to a different class. This basically means that classes that wouldn’t normally heal allies could still do so with the correct master art equipped.

By combining compatible standard arts and master arts, you can do fusion art attacks during XC3’s combat that combine their two effects into one. There are also heroes who have even more classes, therefore more master arts, and new fusion arts. Check out our Xenoblade Chronicles 3 heroes guide to learn more about them.

Chain attacks link multiple arts together and let you deal huge amounts more damage than usual. In Xenoblade Chronicles 2, chain attacks are a bit like a turn-based battle system, except the enemy doesn’t attack, it’s just your party.

You start by choosing a chain order, which is a buff that applies during the chain attack. You have three to choose from, and all our party members’ chain orders are pretty standard. But where XC3 combat gets exciting is when the heroes get involved, though that can be a less regular occurrence.

Once you’ve chosen your chain order, you need to choose different arts to build up the chain attack gauge with tactical points (TP). I know, our gibberish. But the way this works in-game is like a game of cards where you don’t want to lose all your cards.

Two party members can fuse into a more powerful form known as an Ouroboros during XC3 combat. This is known as interlinking. There are three sets of pairs: Noah and Mio, Eunie and Taion, and Sena and Lanz. You can learn all about them in standard combat with our Xenoblade Chronicles 3 Ouroboros guide.

That’s all we’ve got on XC3 combat. For more, check out everything coming in the Xenoblade Chronicles 3 expansion pass to see if it’s worth picking up.