Swedish developers Pixelbite Games has a long and enviable history of producing high-quality premium games. Alongside a convoy of Reckless Racing games sits the impressive Space Marshals top-down tactical shooters and the original Xenowerk dual-stick blaster. Its latest release is an amalgamation of the latter two, with a pinch of XCOM thrown in for good measure.

In a plot that seems heavily inspired by John Carpenter’s The Thing, you take on the role of commander of an emergency response team that has been sent to the Arctic to investigate troubling reports from a secret lab that is owned by the Xenowerk Corporation. It soon becomes clear that mutated lifeforms are running amok, killing anyone unfortunate enough to cross their slimy path. In true disaster film-style, conflicting interests soon bubble to the surface.

The world may need saving, but Xenowerk is more intent on maximising profits and minimising bad publicity.

Commencement of Xenowerk Tactics will see Joyce Grendel, your chief of staff, introducing you to base camp. Your new home may only be a cluster of grey, non-descript temporary structures, but it is essential to familiarise yourself with their various functions. You could drop off at the recruitment vehicle to enlist some new fodd- er, ‘heroes’. 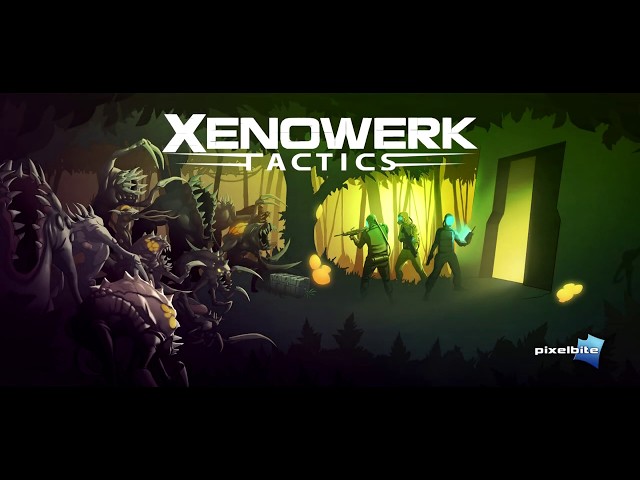 Your recruits will usually be billeted at the nearby barracks, excluding those unfortunate enough to be injured, who can be sent to the field hospital to recover. Those lucky souls who earn enough experience to be promoted can pop along to the spa for some extra-curricular activities.

The armoury is the place to go to equip your team with the latest gadgets. At the command centre, you can check your messages, which will include news updates, requests for assistance and new missions. Initially, there will not be many updates, but as the game progresses various individuals and organisations will be clamouring for your attention.

You may consider going against your employers’ back to make some quick cash on the black market, or even leak some valuable data to more socially aware organisations. After accepting a mission, you will need to load your squad and equipment into the awaiting helicopter. There are three basic classes of recruit: rangers, marines, and scientists.

Each character will have decks of cards, representing their skills, traits and equipment. A ranger can use his recon skill to pinpoint enemies, whilst scientists can scan for the locations of mission objectives. Marines tend to take a more direct approach, using frag grenades to cut through the enemy ranks. 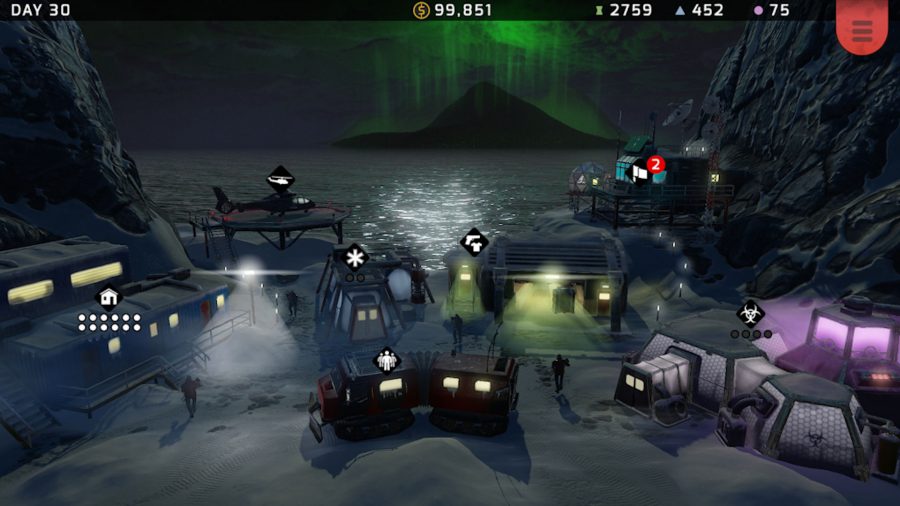 Before take-off, you have one last opportunity to purchase some extra equipment such as explosives, ropes, and machetes, which may be needed to reach some mission objectives.

Your helicopter will land in a previously secured safe zone, from where you will have to continue on foot. On your way to your target, random encounters pop up. These could involve being ambushed by mutants or suffering a drop in morale as one of your operatives tells a really bad joke.

Luckily, some characters will have traits that can negate a detrimental event, for instance, a natural leader can rally the party even after a particularly awful pun. Encounters are not always bad; you may unearth some vital data, or come across a short cut. The map is divided into regions with different threat levels, and all of the available missions will be displayed, alongside any essential equipment.

Mission locations are varied, ranging from jungles and swamps to laboratories and factories. Upon reaching your destination the view switches to a forced overhead 3D perspective, with the surroundings gradually revealing as you explore. Controls are really simple; you can select and drag an individual character to a location, or tap the screen to rally your squad to a particular point. 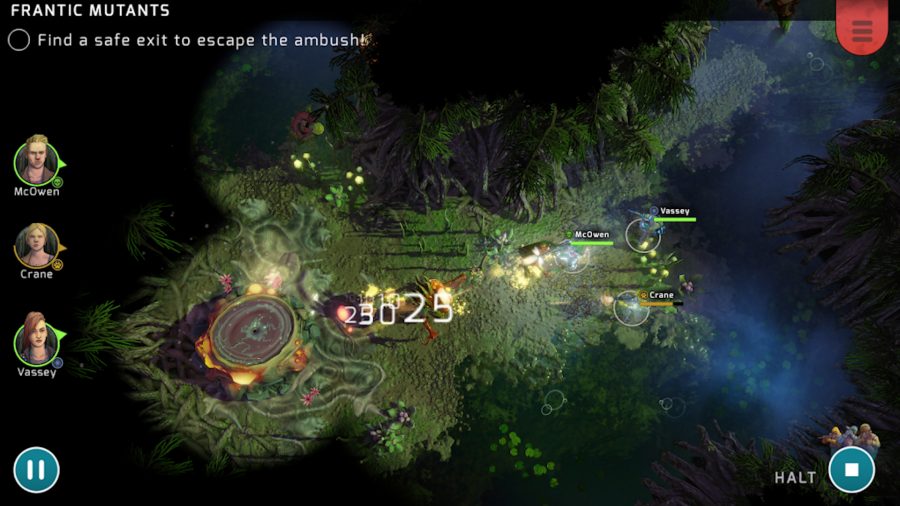 As soon as the enemy comes within range your operatives will immediately open fire. Ammunition is unlimited, so combat is largely a case of finding a position from which you can take down the enemy before your squad gets overwhelmed. If the action becomes too manic you can invoke a tactical pause that will freeze the action, giving you time to gather your wits.

Missions present an opportunity to earn cash, biological samples, research data, and new prototype technology; all of which can be used to complete further missions and to update your base.

Developing your base is, unfortunately, the most disappointing aspect of Xenowerk Tactics (so why not check out our list of the best mobile strategy games to find a better example?). Building development is rather straightforward and linear. Some buildings cannot be developed until others have reached a specified level, so you are never really able to branch out and experiment. The buildings themselves are visually unexciting and do not feel meaningful.

Thankfully, the rest of the graphics are much more atmospheric. They have a 1990’s sensibility, with an army of suitably H.R Giger-style slimy mutants stalking murky corridors, lit by the eerie glow of your team’s torches. You will encounter passageways decorated with trails of blood and dismembered bodies and rooms furnished with grotesquely organic mutant-spewing generators. 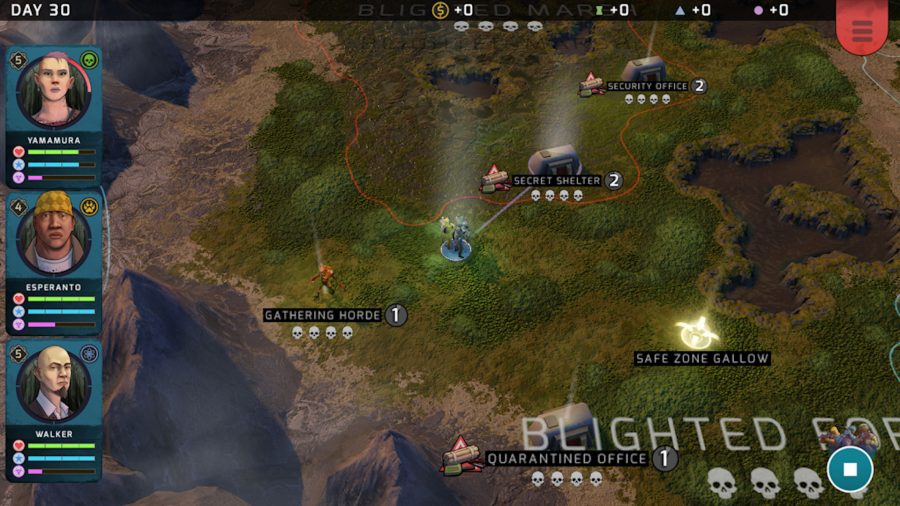 Weapons are enjoyably powerful, with enemies exploding in a gooey mess of appendages. The music is also excellent, again paying homage to John Carpenter’s work. The tension is palpable and is further exacerbated by the fact that if you do not have the extra equipment required to give immediate medical care or evacuation. Seriously injured squad members have to be left behind.

Overall, Xenowerks Tactics is excellent, if battery guzzling, fun. A single very reasonable upfront payment gets you the whole game, with no constant internet connection required. Battles are hectic and satisfying, although the almost arcade-like action may put off those who appreciate a more considered approach.

The bleakness is lifted by some nice humorous moments, like when your squad begin arguing over pizza toppings. It may at times feel like a shoot-em-up, but there is still plenty to consider. Your chief strategy will involve securing strategic safe zones before venturing deeper into the infected area. This involves carefully managing your squad and time.

Knowing how far to push your guys and when to swap them out for weaker but healthier alternatives is key. Equipment is strictly limited by carrying capacity, so planning is necessary and may mean that you will not always be returning to HQ with all of your squad members present. 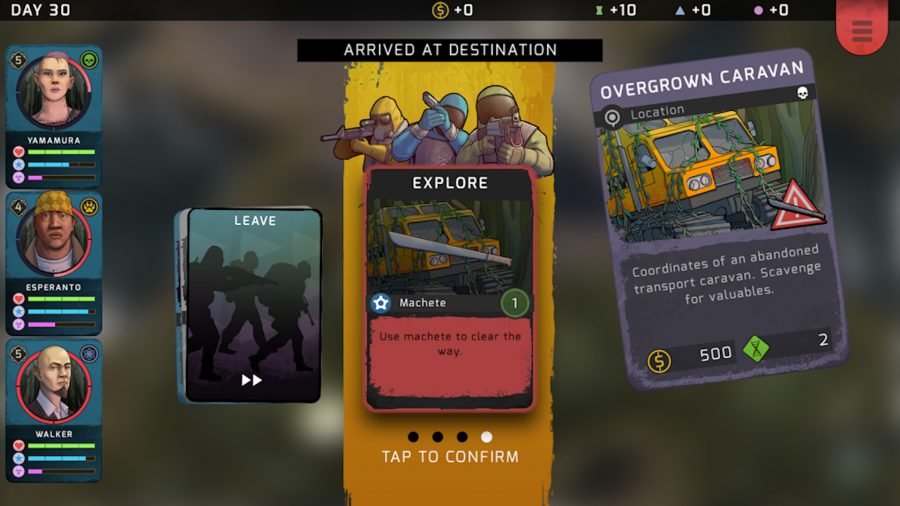 Your operatives have a diverse range of individual traits, which certainly gives them character and makes losing a favourite operative a sad affair. The base building feels undeveloped and tacked on, but when the rest of the game is so entertaining, it is an issue that can be forgiven.

Xenowerks offers a welcome change of pace from more traditional strategy games, it may not be that deep but blasting mutants is still a very cathartic experience.