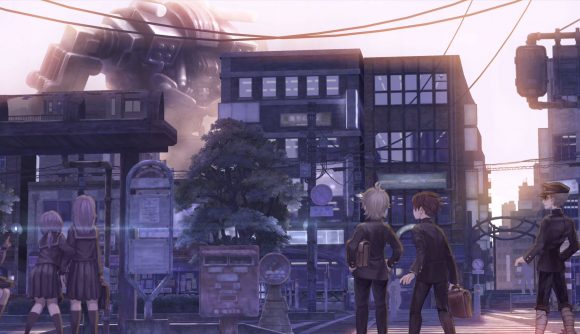 Having first released in 2019 on Playstation 4, 13 Sentinels: Aegis Rim has amassed a large following and has been praised for its beautiful art style, intricate stories, and engaging gameplay. Developed by Vanillaware, the storytellers behind Odin Sphere and Dragon’s Crown, and Published by Atlus, well-known for the Persona series, 13 Sentinels: Aegis Rim has shipped over 500,000 copies to date.

If you’ve been waiting for it to arrive on Switch, well, those dreams are now coming true. Atlus has announced that the 13 Sentinels: Aegis Rim Switch release date is on the horizon, and you don’t have long to wait. If you’ve not had the chance to dive into this story-rich masterpiece yet, this is a perfect opportunity to pick it up on your favourite platform.

13 Sentinels: Aegis Rim is a 2D, side-scrolling adventure, where you uncover the secrets of 13 interweaving stories, crafting a sci-fi mystery epic. Battle monstrous kaiju in fast-paced, top-down combat, customise your sentinels with an arsenal of mech suit weaponry, and unravel the complex web spanning across time.

Atlus announced that the 13 Sentinels: Aegis Rim Switch release date is set for April 12, 2022. Check out the announcement trailer below, to see what’s in store.

Are you ready to re『 START 』?

If you just can’t wait until April, then you can take a look at our lists of the best Switch RPGs and the best Switch adventure games to find something to play in the meantime.