Another day, another deck-builder, but does Aeon’s End have a sufficient number of tricks up its wizard-y sleeves to stand out in a crowded market? The first attention-grabbing feature is that Aeon’s End is a cooperative game that can be played in pass-and-play mode with up to three other players (like your local co-op? We’ve put together a list of experiences like this in our best mobile two-player games), but also works equally well with a solo player controlling a maximum of four mages.

These mages have learned mastery over energy breaches, allowing them to cast powerful spells. One small problem; the breaches have also permitted the Nemesis to come a-calling. This guy wants nothing more than to destroy your home of Gravehold, and to slaughter a few mages along the way.

There are three types of cards in Aeon’s End: gems are the game’s currency, spells are used to inflict damage, and relics have a range of special powers. At the start of each game, a supply of nine available cards is determined.

You are free to either choose at will, select from a particular theme, or even go for a completely random set-up. This supply is selected from a range of 27 different options and, much like Dominion, this market will contain the same set of cards for the entire game.

Card games your jam? We’ve got you covered in our list of the best mobile card games.

Whilst in many similar games, currency is only used for buying cards, in Aeon’s End it has other uses too. The currency, a resource known as aether, can be used to open additional breaches, thus allowing the mage to prepare more spells. Or, it can be used to charge a mage’s unique power. These extra choices really add to the decision-making process, making players think carefully about the best way to distribute their limited resources.

Deck-builders are usually characterised by more shuffling than a Post Office queue on pension day. The physical chore of shuffling doesn’t affect us lazy digital gamers, but the resultant randomness certainly does. In Aeon’s End, when your deck is exhausted, you simply flip your discard deck and continue playing.

It doesn’t sound like a big change, but it does provide the opportunity to plan future turns and prepare some killer combos. It also means that extra thought is needed when deciding on the order to discard your spent cards. If this isn’t enough to think about, there is also the option to keep unused cards in your hand for use in future turns.

Another area in which Aeon’s End excels is in the wide variety of set up options. Each game will pit the mages against one of four different nemeses. My personal favourite is the Prince of Gluttons who gobbles up the supply of cards faster than Pacman can munch dots. Or, maybe, Crooked Mask, who has a nasty habit of shuffling your deck whilst adding a few nasty corruption cards for you to deal with. All four fiends are not averse to playing a barrage of nasty cards, whilst also throwing a few henchmen into the fray. To up the tension even further, the power of each nemesis increases as the game progresses.

Much thought has been spent on the design of all four nemeses; they are distinctly different and offer their own challenges. At times, their powers can feel a little harsh, but never unfair.

Another twist that adds to player anxiety is the way that turn order is decided. Aeon’s End does away with predictability by randomising player order at the end of each round. The turn order deck is always composed of four player cards and two nemesis cards. So, if you only play with one mage you will be getting four turns each round. This can impact on how you coordinate the actions of your mages. Especially since mages first have to prepare spells by allocating them to an open energy breach. Only on the following turn is the spell energised and ready.

There is a roster of eight mages, each with their own set of ten starting cards. These will be a mix of aether crystal cards, weedy spark spells, and, more interestingly, one unique card. 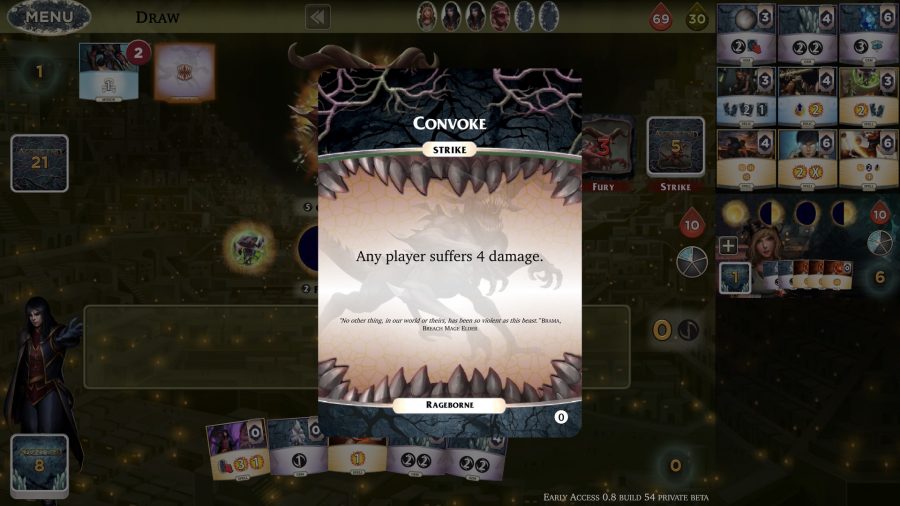 Jian’s moonstone provides her with an extra aether, which can only be used for purchasing gems. A specified set of five of these cards will make up the mage’s first hand. Xaos, for instance, begins with four crystals allowing him to buy a decent card from the supply on the very first turn. Mages also have a special ability that needs to be fully charged before use. Returning to our friend, Jian, she can use her black mirror ability to enable any mage to cast a prepared spell twice.

Aeon’s End has a lot of on-screen information to keep track of, which means that the game is a tablet exclusive. Even on larger tablets, the artwork is often sacrificed to squeeze everything onto the screen. There are also a large range of tiny icons to decipher which is a barrier to learning. Thankfully, a tap and hold will bring up a card in full detail, also giving you a chance to admire the illustrations. 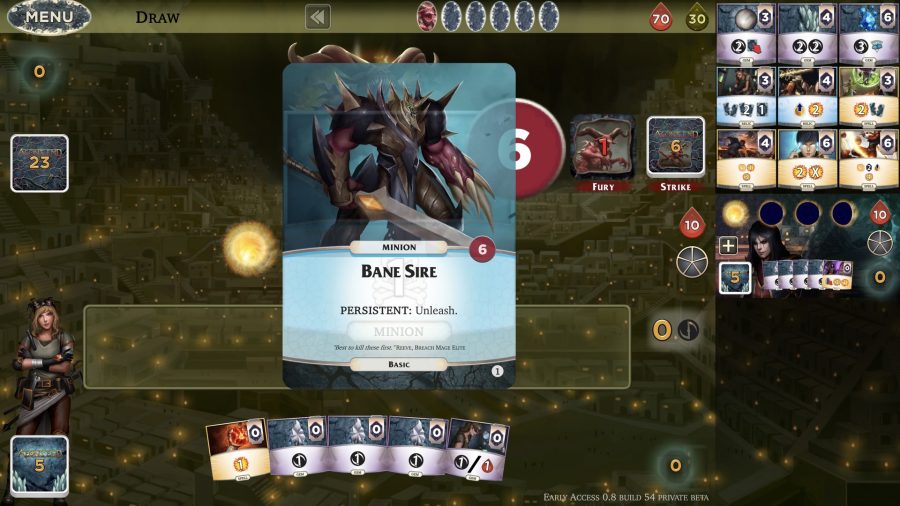 There is certainly more going on here than in many other card games, but it doesn’t reach Twilight Struggle realms of complexity. Developer Handelabra is a safe pair of hands, as its work on Sentinels of the Multiverse and One Deck Dungeon testifies. The lack of online options is a tad disappointing, but this is still a top-notch conversion.

Aeon’s End is a wonderful game, the control that it offers over deck management is especially worthy of merit. The cards seem to be very well balanced with no absolute stinkers or overpowered abilities. Variety is also a big plus; each mage feels distinct and each nemesis requires a different approach. There is a generous amount of content, with challenging difficulty levels, a choice of 27 different types of market cards, four nemeses, and eight mages.

If you want a puzzle-y deck-builder that encourages and rewards long-term planning, then Aeon’s End ticks all the right boxes.