The best mobile card games combine the appeal of tactical play with the adrenaline rush of random loot and deck building. It might seem like they’re dime-a-dozen, but even after so many variations digital card games manage to innovate. Who could have predicted the massive popularity of Slay the Spire? Or of games like Slay the Spire on mobile? Forever combining the dungeon crawl with smart roguelike deck building.

Whereas games like Griftlands, currently in alpha on the Epic Store, or Gwent’s Thronebreaker show how entire worlds can be built using cards, and how they represent an alternative to developers unable to create the massive RPG settings of their triple A counterparts. The games detailed below may utilise the format in different ways, but they are all equally worthwhile.

Some are cut-throat tests of supremacy, others more pleasant come-as-you-may types, but all are thoughtful and ingenious. There are two flavours of card game that currently dominate the niche: highly competitive TCG/CCG multiplayer battlers derived from Hearthstone, and more casual affairs, often translated from physical card games that already exist. We’ve woven all of these types into our list of the best mobile card games. 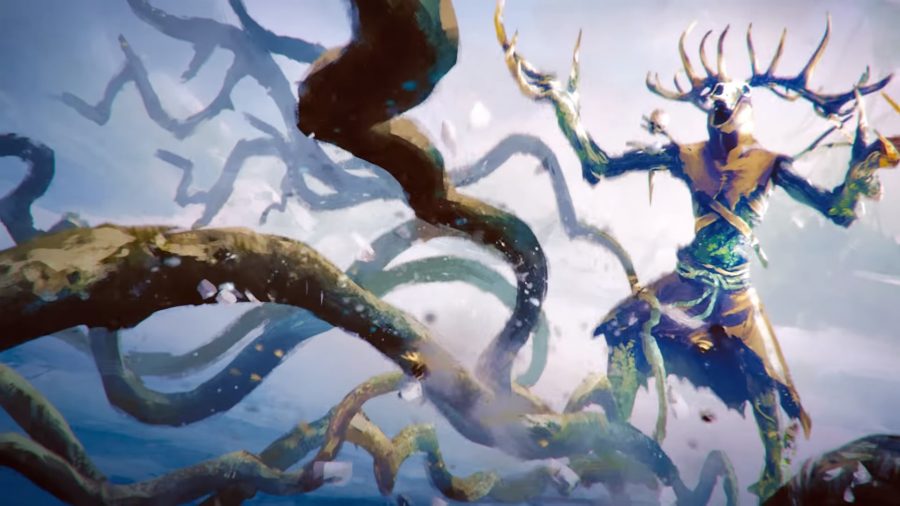 It took its sweet time, but the official spin-off of Gwent, the Witcher 3 card game, is now on both Android and iOS. It’s quite different from what it was like at launch and it’s gone through several updates and revisions, meaning that us mobile jockeys get a game that’s tight and quite unique compared to some of its contemporaries. It’s a power-struggle between two people, but it’s less about pounding each other’s cards into dust or attacking life-points – it’s simply a best-out-of-three bout to have a bigger number than your opponent at the end of the round.

This simple concept can inspire a surprising amount of cunning and card combos, with card advantage being a very important concept. As a free-to-play game there are IAPS and micro-transactions, but it’s very tame and you can still get access to cards through gameplay. If you want some tips to up your game, have a look at our Gwent guide. 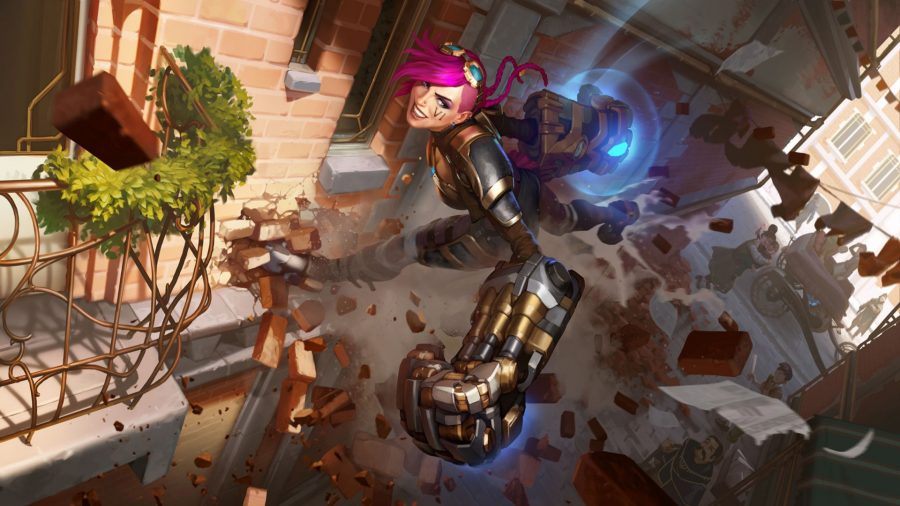 Considered by many as Riot Game’s challenge to Hearthstone’s supremacy over the mobile deck builder genre, Legends of Runeterra changes up the formula just enough. Using a new spell system for excess mana, and featuring attack, and block phases, the tactical depth of the game outstrips many of its genre rivals.

Legends of Runeterra is set in the same world as League of Legends, and the quality and quantity of the artwork in the game is pretty astonishing, not only fleshing out the world, but utilising its many characters as in-game Champions too. Check out our guide for Legends of Runeterra decks, if you’re looking to get started. 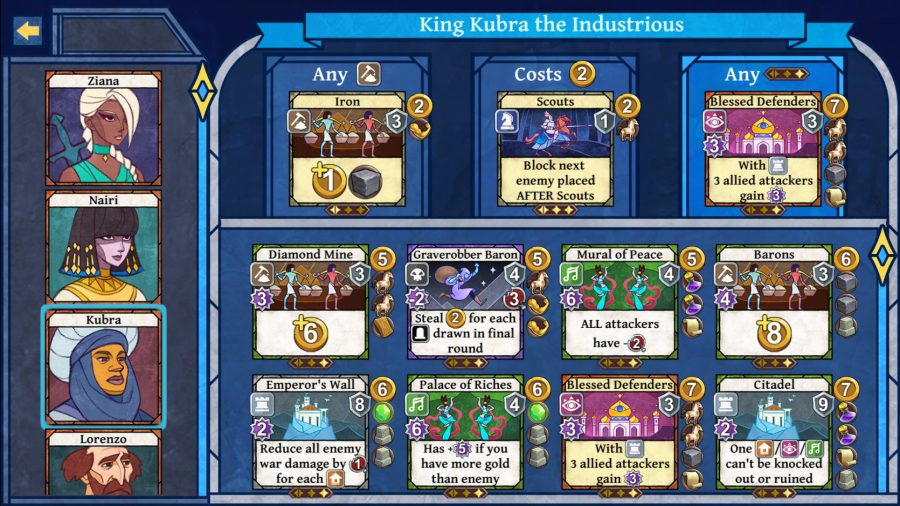 Released in 2017, this strategy card game takes a lot of inspiration from physical design, while remaining very much a digital. It’s more about drafting than deck building, with five phases repeated across four rounds. A game can last as little as ten minutes.

It’s minimalist, but with a touch of flair as you attempt to draft cards based around specific themes, and build your board up as the game progresses. While it was in a bit a state when it first launched, the years since release have seen this one mature into an excellent game that’s well worth checking out. Crave more board-based mischief? Browse our picks for the best digital board games on mobile. 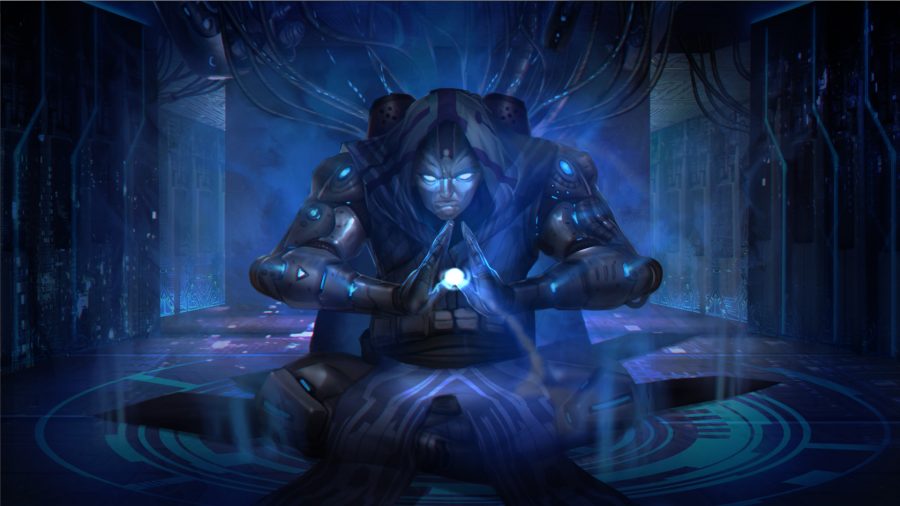 Ascension is a household name in deck building card games, especially on mobile. While Playdek was responsible for bringing that light into our world, Temple Gates Games has the honour of bringing the spiritual successor of Ascension to mobile – and it’s one of the best card games we’ve played to date. The game itself is slick, well designed, and has some very interesting twists on the deck building formula. Shards of Infinity isn’t a reskin of Ascension, but is a new game in its own right. 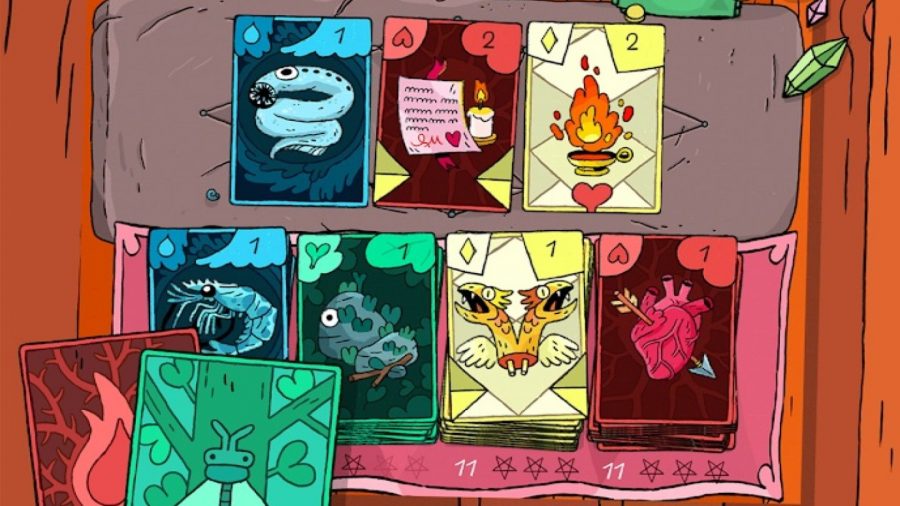 One of the few games that has been a staple on this list since its inception is Tinytouchtales’ Card Thief, but there are other great card games the developer has also made. The most recent release was Miracle Merchant, a game about trying to craft potions for customers in need of a remedy or other liquid solution. You must juggle the competing, but equally important tasks of satisfying customers, and maximising profits. Miracle Merchant is solitaire card-gaming at its finest. The art style is impeccable, and the tactical decision-making is incredibly deep. 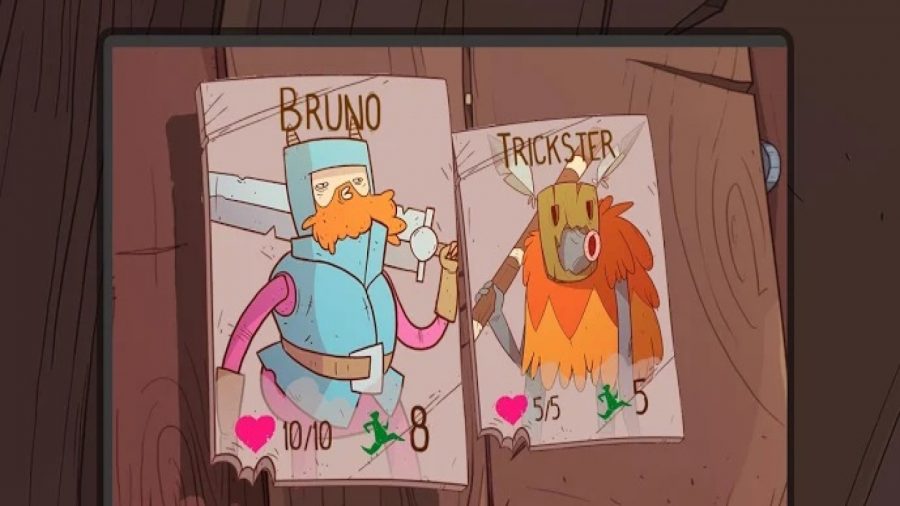 In the happier sessions, Meteorfall ends with a successful final showdown against the aptly-named Uberlich. Working backwards from that ultimate battle to the four starting characters is much more challenging than the fun art and breezy interface might suggest. It is a game that’s been wonderfully supported post-release, with several major content expansions. What’s better, it’s all been given away for free! 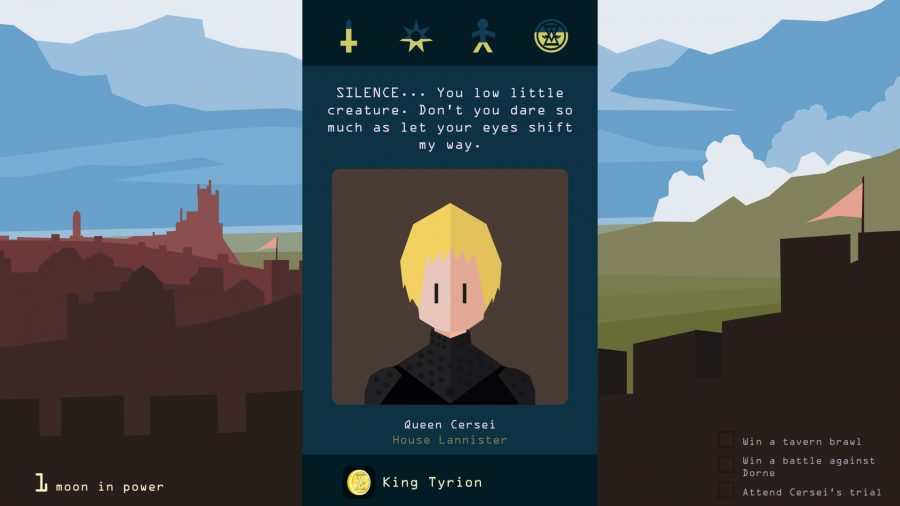 The phrase “living your best life” is not often one you hear applied to a game, but we can think of no title that’s more applicable than Nerial’s licensed Game of Thrones version of its hit card/monarch simulator, Reigns. This is hands-down the best version of the Reigns formula we’ve seen, and it helps that it involves an engaging and popular IP.

Reigns: Game of Thrones consists of the typical Tinder-style swiping mechanics, coupled with the usual medieval hilarity, and tough choices, as players try to rule the Seven Kingdoms as one of nine iconic characters from the show. All this is enabled through the guise of the character Melisandre; you’re essentially playing out her visions of how these characters might get to sit atop the Iron Throne. Licensed games often get a bad rap, but this one is a great iteration of a great game formula. For more cutthroat diplomacy, see our best mobile strategy games guide. 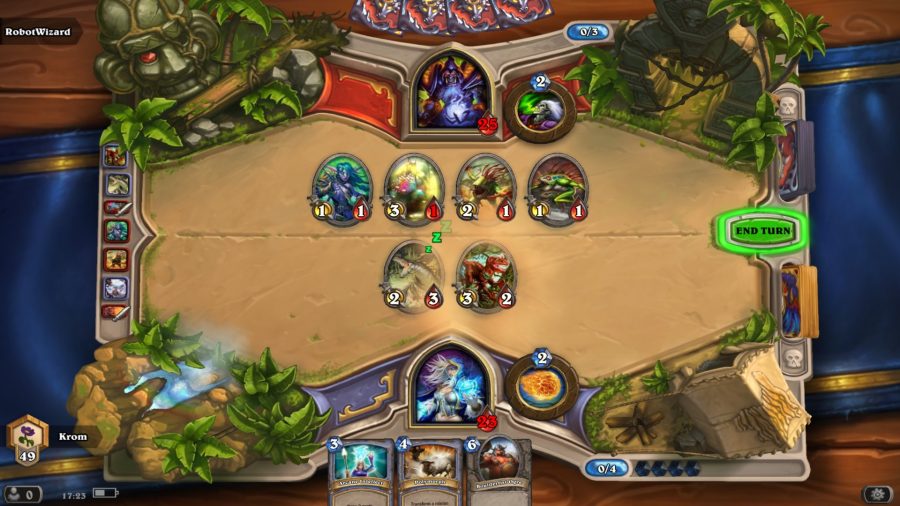 A weary party of adventurers stumble into a strange tavern in the woods. The paladin walks up to the bar, where the innkeeper is polishing a tankard, and says “My good sir, pray grant me one of your finest pints of ale, for our road has been long and weary!” The innkeeper looks up in puzzlement: “We only serve cards here laddie.” The paladin is taken aback. “Then we shall find another establishment!” But as he tries to leave he finds the door is locked. “Oh you can’t ever leave now. Come and warm yourself by the fire… I’ve got a little game to show you.”

That is the story of how Hearthstone came to be, and how it basically defined this whole generation of mobile deck builders. Based on the Warcraft universe, players battle with a selection of heroes and minions, using a gradually increasing stock of mana to play cards, and escalate the battle. The game also introduced an auto chess mode last year, Battlegrounds, to much approval. If you want to give it a look, our tips for Hearthstone Battlegrounds on mobile can help you get started. 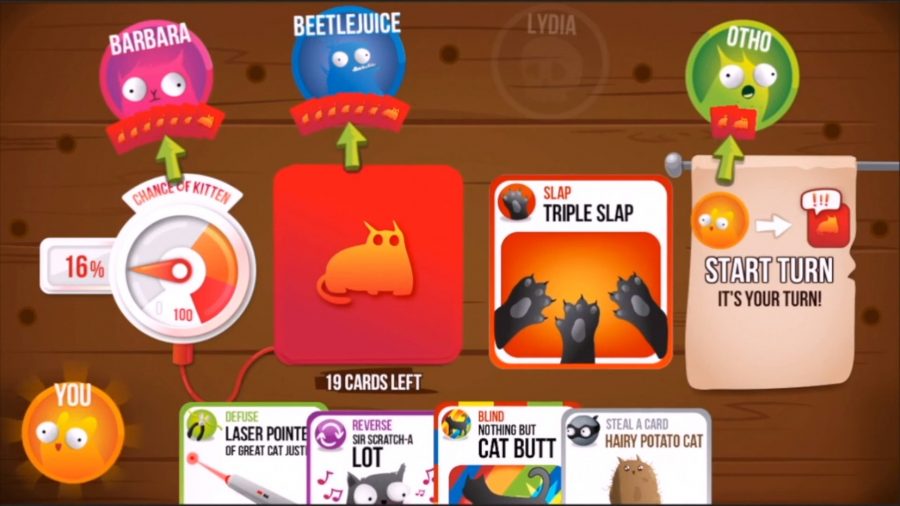 A game of hot potato with a nitroglycerine-infused feline escalates until every player save one has met their maker. Exploding Kittens combines fiery cat death and simple humour, to create a game with hostility and sabotage at its centre. Each player only has one life to live, and one defuse card to keep that hairball from becoming a fireball, so quickly players will find they are at each other’s throats. The game is a childish, cartoonish pastiche of obvious joked made too often, but it remains one of the best guilty pleasures around. 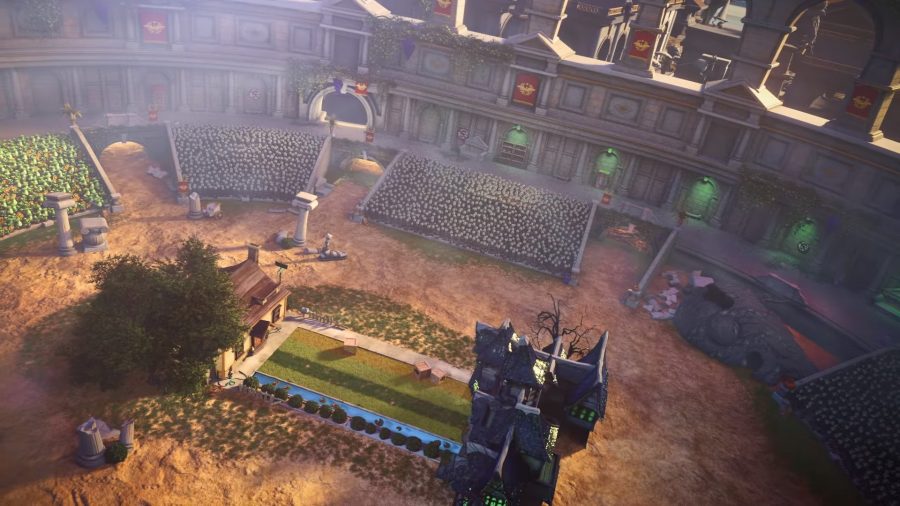 This series has reinvented itself several times since the original’s premier success. The sequel to the tower defence titan dallied with free-to-play energy timers and premium unlocks, then the series experimented with the FPS arena shooter, releasing Garden Warfare. Along the way, some of the magic and charm was lost.

But Plants vs. Zombies: Heroes is an inspired and refreshing late entry to the game series, translating the original tower defence formula to a CCG with some nifty changes. Perhaps the single coolest defining feature is the asymmetry: one player represents the zombies shuffling forward for a quick bite, while the other coordinates the plants fighting to repel the undead. The power dynamic between the two sides is unusual and distinct, and this core gameplay shines alongside the visual polish and jazzy flair the series has come to be known for. 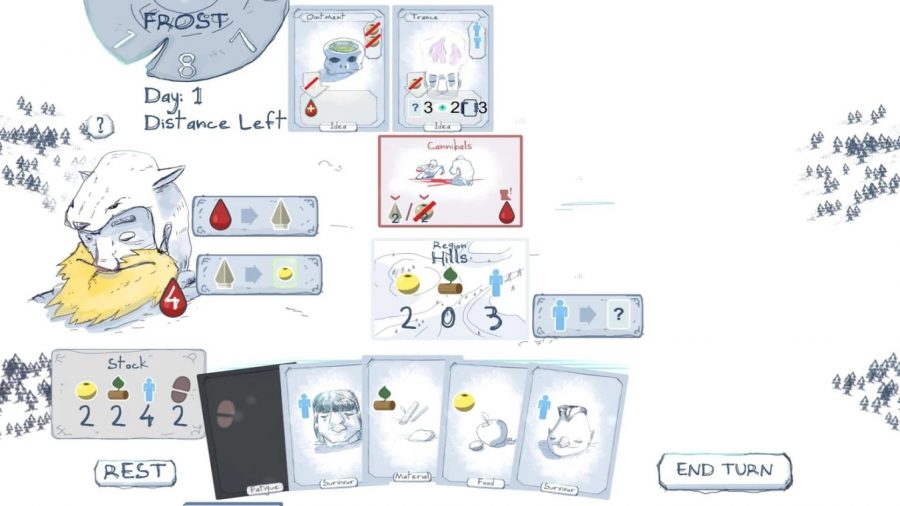 This one stands out from the other members of this list on two fronts. Firstly, for its palette, which is as frigid and monochrome as you’d expect. Secondly, because its gameplay is survival-based, not just thematically, but actually. Gathering supplies, fending off baddies, and keeping the elements at bay, takes every possible trick the cards can give you. Better performance will net you better tools, but, unlike other games, Frost’s best rewards are a sense of security and temporary respite.

In other words, the game won’t see you chasing exhilarating high scores or excitement, but rather staving off the undesirable. Loss aversion, the fear of breaking a fragile equilibrium; the game dares you to take only appropriate risks when the phrase is a hollow oxymoron. The game rewards you with the chance to keep playing,  and continue exploring its stark dangers. 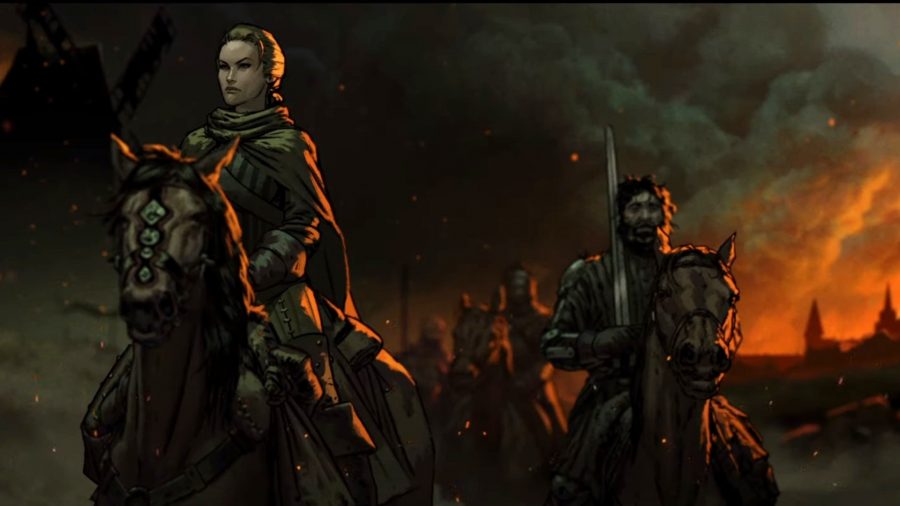 This is a fantastic deck building RPG set in the world of The Witcher. Following Queen Meve and her plucky bad of guerilla fighters, you muster an army to take back your usurped throne. Thronebreaker itself is a wonderful combination of RPG overworld elements, and deck building synergy as you build your force. Check out our Thronebreaker review if you want to know more. We also spoke to the game’s director about building an RPG world with cards! 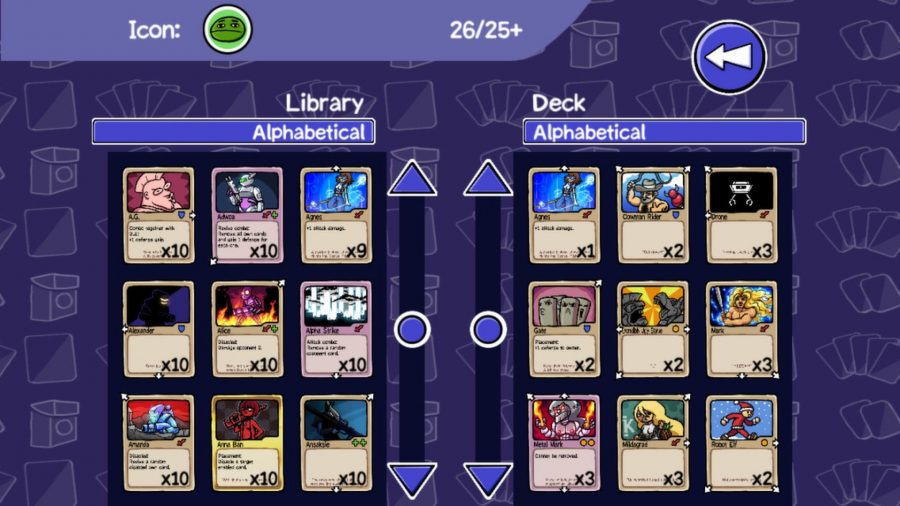 The characters of Card City Nights are idiosyncratic, and its game-within-a-game showiness is a little cheeky, but still refreshing, especially alongside its consistent deadpan humour. Beating certain keystone characters unlocks their signature, ultra-powerful cards; the effects of which even match that character’s personality. In other words, there is a correspondence between the writing, the characterisation, and the deck archetypes, which is extremely cool. Somewhere between a real good time and an agonizing head-scratcher, Card City Nights makes for an easily enjoyed, and binged, experience. 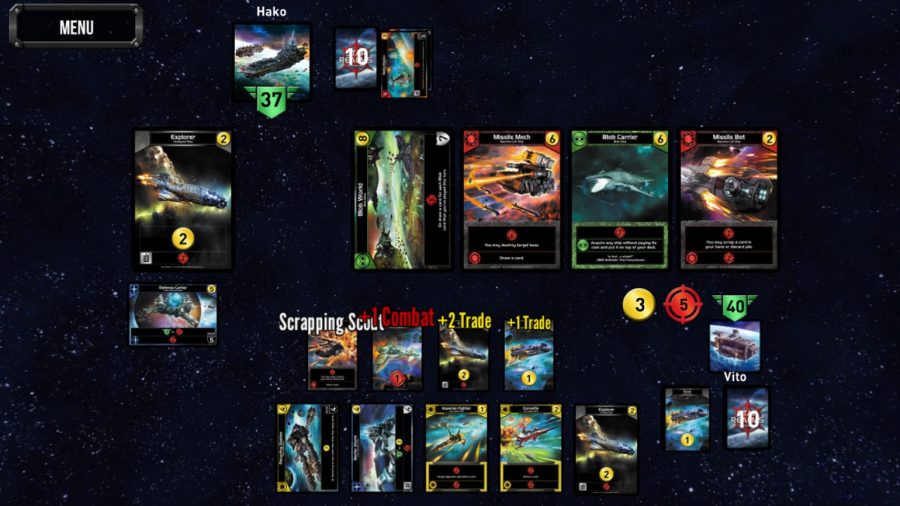 Marrying the level of expansion and customisation of a TCG, with the bite-sized, crunchy, decision-making of a deck builder, Star Realms is a wonderful little card game. Its combat elements and faction-specific combos make for a serious nostalgia trip for those looking to revisit memory lane without first collecting, collating, and crafting a custom deck just for the occasion. Star Realms’ many expansions, rapid-fire gameplay and clear iconography make it a compelling addition to the mobile card game enthusiast’s roster. 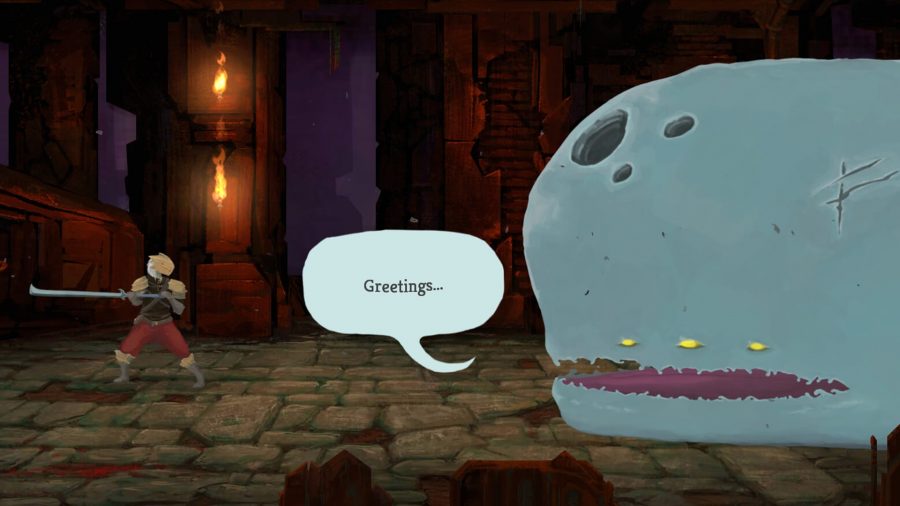 Though we had to wait a long time, Slay the Spire finally arrived on mobile. The game is a testament to all that is good in roguelike deck building, as you construct synergies on the fly in a bid to climb the eponymous tower. It’s so good, we even have a dedicated guide of games like Slay the Spire on mobile.

Those are all the games we have for now! If you’re still looking for further recommendations, have a glance at our best android games and best iOS games lists. Also if you enjoy tabletop ports, our guide of the best digital boardgames might be for you!