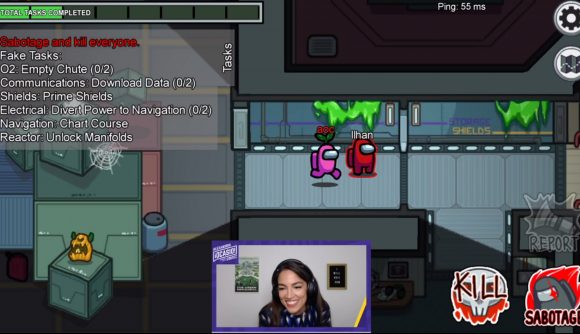 New York’s congressional representative Alexandria ‘AOC’ Ocasio-Cortez’s debut Twitch stream was watched by more than 420,000 people last night. AOC floated the idea of streaming to get people to vote on Monday, and just two days later she hosted one of the most successful debut streams ever. The Congress member chose to play Among Us, a game she admitted looked like a lot of fun, but she’d never played it before.

AOC’s stream featured an all-star line-up of Twitch streamers, including Imane ‘Pokimane’ Anys, Hasan ‘HasanAbi’ Piker, and Jeremy ‘Disguised Toast’ Wang. Throughout the broadcast, many popular streamers joined the 10-person lobby, but the biggest surprise of the night came from Congresswoman Ilhan Omar’s appearance. Omar even went as far as to post her computer specifications when asked by numerous Twitter users.

Despite never having streamed before, AOC’s supporters created all of the stream elements she needed to look like a regular Twitch partner. Though a large portion of the three-hour long stream was dedicated to playing Among Us, AOC made sure to remind viewers to get their vote in as early as they can.

This isn’t the first time a political person has streamed on Twitch before. Bernie Sanders and Donald Trump regularly use their Twitch channels to broadcast rallies and virtual events. AOC treated Twitch as most streamers do rather than another website to host political videos on, and it seems the Twitch community responded positively to this approach.

Anyone want to play Among Us with me on Twitch to get out the vote? (I’ve never played but it looks like a lot of fun)

AOC’s very first attempt at Among Us went surprisingly well, but we reckon she could’ve performed even better if she checked out our Among Us guide. If you’re looking for some multiplayer fun to enjoy on your mobile, definitely take a look at our best mobile multiplayer games guide to get you started.