First things first, I love Apex Legends. In my humble opinion, it’s simply the best battle royale game out there, bar none. Sure, Fortnite might have started the trend, and Call of Duty: Warzone might have the edge on gunplay, but no battle royales – and few games in general – nail slick movement as well as Apex Legends.

And, at the end of the day, that’s what a battle royale game is all about: movement. When you’re 1v1 with an opponent, your ability to click heads may rise to the top of the ‘most important skill in this situation’ list, but in battle royale games, and especially those without solo modes, you’re rarely in a 1v1 situation. If you are, you’ve inevitably messed up somewhere down the line. And if you do find yourself in a 1v1, or even a 3v3 with your team, the group with the better positioning inevitably wins.

However, while you can slide, zipline, and gravity lift your way across Apex Legends’ three maps, you’re pretty much stuck in an ergonomically-designed gaming chair while you play. Until now.

Apex Legends’ Nintendo Switch port offers a unique opportunity for fans of Respawn’s battle royale, and an entry point for intrigued players who might not have a gaming PC or high-powered console. 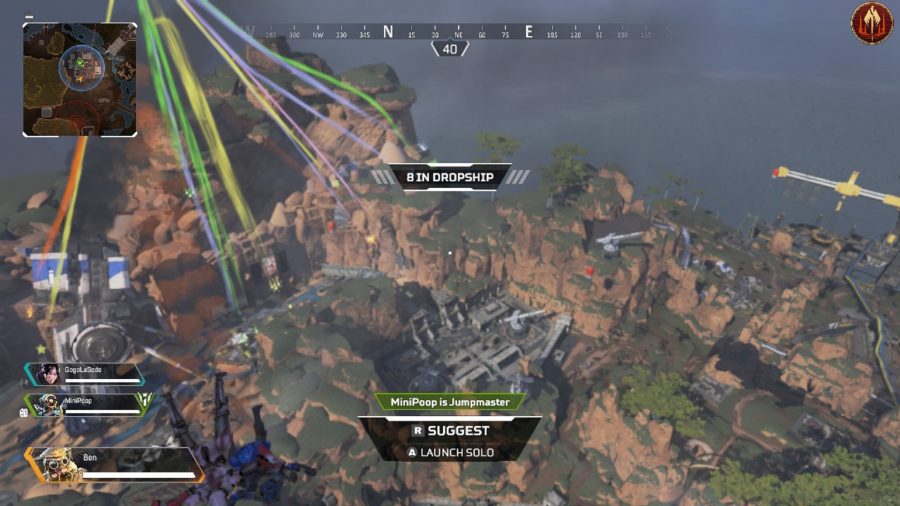 While Apex Legends has cross-play, it is yet to offer cross-progression

You’ve got two choices when picking up Apex Legends for the Switch: you can download it for free or pick up the Champion’s Edition for £34.99. The Champion’s Edition comes with all content from Seasons 1-7 unlocked, including every character barring Fuse, the newest addition.

However, if you’re a long-time Apex Legends player who just wants to jump into the free-to-play game on Switch, you’ll be severely limited. While Apex Legends has cross-play, it is yet to offer cross-progression, meaning you’ll have to pay to unlock all the characters again if you change devices. Even if you buy your favourite character again, you won’t have their skins or other cosmetic treats unlocked.

For me, cosmetics are a minor issue, but I would definitely think twice before buying a character for a second time. I’ve been a Bloodhound main since the game first released just over two years ago, but in recent months I’ve developed a soft spot for new girl Horizon – partially due to her dulcet Scottish quips, and partially because she sits high on any respectable Apex Legends tier list. 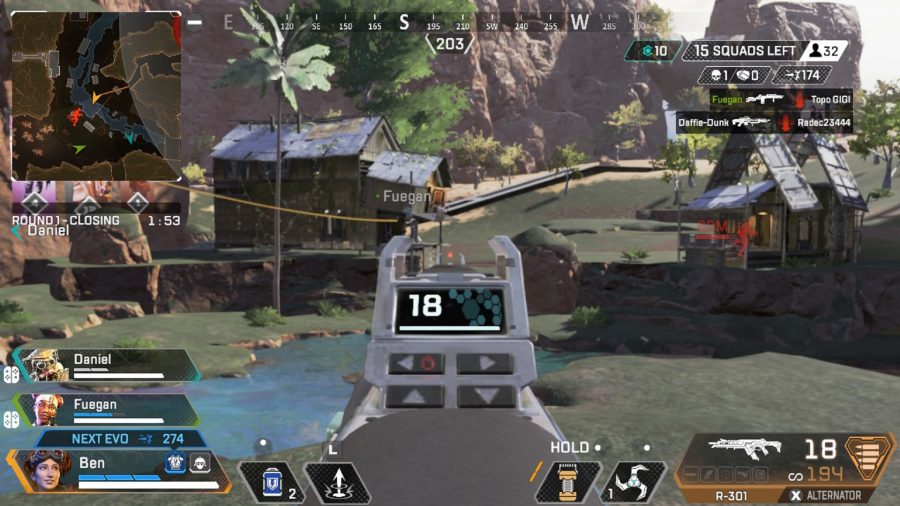 However, once you’ve decided which option you’re plumping for, you can really get into the game. If you’ve never played Apex Legends before, the initial barrage of notifications can be overwhelming, but it gets easier – I promise. This is especially true if you’re starting up in handheld mode, as the UI is noticeably cramped. You also have to use your joysticks as a cursor, which is a personal bugbear of mine, but that’s no different to the experience playing on Xbox or PlayStation.

Speaking of joysticks, though, you’ll probably want to upgrade from the Switch’s standard Joy-Con, as they are as cramped as Apex Legends’ UI, especially if your hands are on the large side. Mine started drifting years ago, but this is easily mitigated by using one of the best Nintendo Switch controllers. Personally, I use the Hori Split Pad Pro when I’m in handheld mode and Nintendo’s Pro Controller when my console is docked.

Beyond making the move from mouse-and-keyboard to controller gameplay, I was also taking a huge cut to my framerate. This was to be expected – after all, the Switch is a cracking console, though it’s not got the same hardware as my gaming PC – but going from 120fps to a mere 30 is more than a little jarring. Having said that, I didn’t notice any particularly serious drops under the advertised 30fps (although there is no way to measure that accurately without modding your Switch). 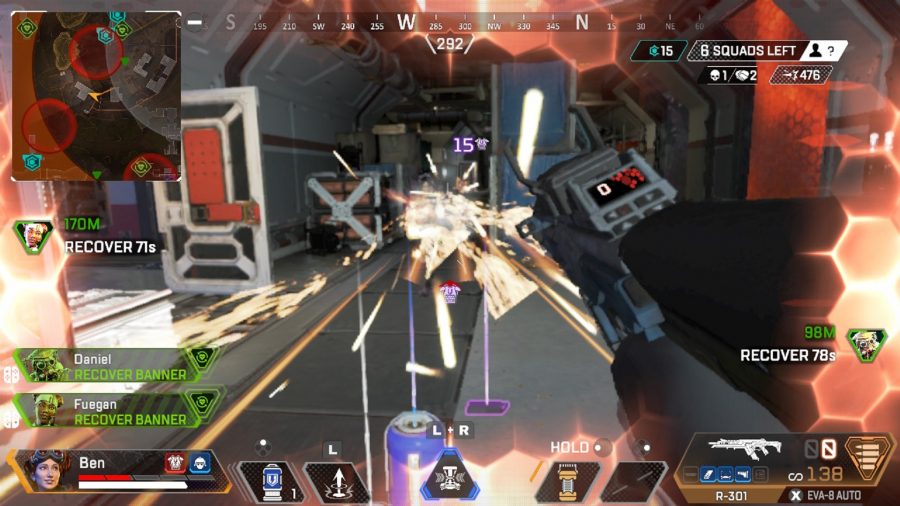 Apex Legends is severely limited by the Switch’s abilities

When playing with my Switch docked, I did face one major problem. The screen would briefly black out for maybe a second or two when an opponent shot me. This was often the direct cause of my death, and I can’t for the life of me work out exactly why it happens. It only rears its head on the first bullet of a fight, but more often than not delivers a full-screen blackout. It also didn’t happen every time I got into a fight, but regularly enough for me to notice. Thankfully, the issue does not affect the game in handheld mode.

I hope this issue is not endemic to Switch users and is instead something going wrong on my end, because those playing on Nintendo’s platform are already at a severe disadvantage. While they won’t land in lobbies with PC players, they will have to fight it out with others using more powerful Xbox and PlayStation consoles, who potentially have twice the framerate. That being said, I did find that most of my matchmaking dealt me in with random teammates who were also playing on Switch. It’s hard to tell for the rest of the lobby, but we didn’t win many matches. Maybe that’s just a me problem, though.

Or maybe not? After all, Apex Legends is severely limited by the Switch’s abilities, which even an avid Nintendo fan will admit aren’t suited to multiplayer first-person shooters. You’ll have to brush up on your pings, because there’s no way to communicate verbally with your teammates. The textures and video quality are both very low – likely to keep the framerate stable, which is admittedly more important – though this means you’ll struggle to see enemies until they’re right on top of you, even if your Switch is docked to a large screen. There’s also no mouse and keyboard support, unlike other consoles. 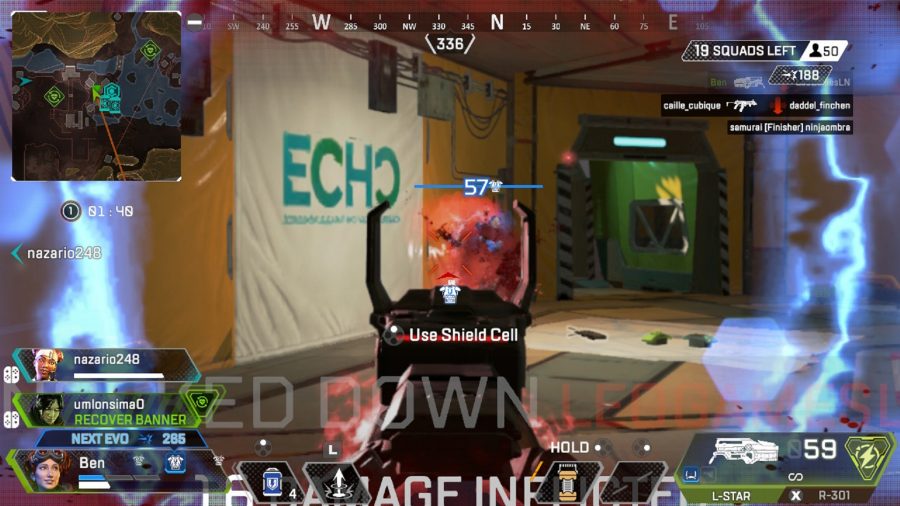 The inability to attach wireless headphones to the Switch without a chunky adapter isn’t too big a problem, but hampers its main draw: its portability. I’m hardly going to play on the go with my headphone wire dragging behind me like a skipping rope, am I?

Panic Button’s previous ports of the likes of Doom Eternal and Wolfenstein II: The New Colossus were great, and, honestly, Apex Legends runs really well considering the hardware it has to work with. However, I can’t see anyone taking to the Apex Legends ranked ladder on the Switch – the experience simply isn’t good enough to have a chance of doing well. Perhaps when the rumoured Nintendo Switch Pro arrives, Apex Legends will receive an upgrade. Next-gen players are still waiting for a similar improvement, however, so don’t hold your breath.

The best thing about playing Apex Legends on the Switch is definitely the portability, even if it comes at a cost. Tethering to a mobile hotspot and dropping in hot will make a commute fly by, playing in your garden will be a blast when the weather starts improving, and everybody needs to experience Apex Legends on the toilet once in their life. The Switch is king when it comes to playing wherever you want, but once you get home, you’ll be much better off loading the game up on a console or PC.

Ultimately, the Switch offers a unique way of playing Apex Legends on the go, but one of the best battle royale experiences is seriously hampered by the limitations of the hardware