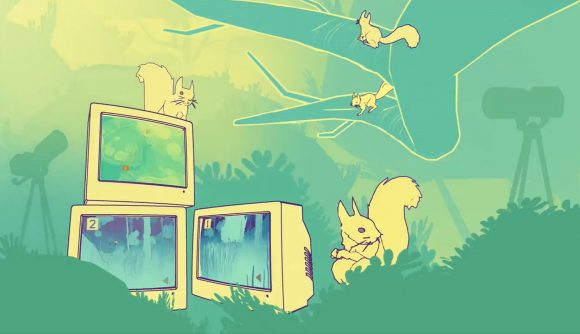 A block-matching puzzler called Spire Blast and a squirrel surveillance game named Nuts have been announced for Apple Arcade. The first game mentioned features unique physics-based puzzle action in a colourful kingdom. As you travel between levels with your cute dragon companion, you’ll need to utilise numerous tools to emerge victorious.

The second announcement revealed a game with bold visuals and soothing sound effects to immerse you in its gorgeous forest setting. Nuts sees you tracking the movements of a scurry of squirrels to work out where they hide their nuts and determine why they act in such a strange way. You’ll be given a mission briefing, then need to arrange your camera for optimal squirrel tracking. Once the footage is captured, you’ll be tasked with analysing it and working out some squirrel-based mysteries.

Spire Blast and Nuts do not have release dates at the moment, but you can request updates from the App Store for both titles. If you’re interested in block-matching fun, here’s more information on Spire Blast. If squirrel surveillance is more your speed, here’s everything you should know about Nuts.

You can check out the official Apple Arcade Twitter page for more details on both games, as well as any other upcoming titles they may soon announce.

⏰ Click to get a reminder when it's available: https://t.co/wX2om0yUIM pic.twitter.com/WAGlO3UOw7

If you’re looking for something to play in the meantime, take a look at our complete list of Apple Arcade games. The first Apple Arcade game of 2021 will seemingly be Oceanhorn: Chronos Dungeon, a top-down multiplayer roguelike.