There’s perhaps no genre more synonymous with mobile than puzzle games. Low intensity inputs are good for a device with no buttons, and the pace of these games plays well with the low session time, and start-and-stop nature of mobile gaming. It could be series like Monument Valley, smartly combining puzzle-play with optical illusions, or games like Lara Croft Go, channeling the classic, adventure puzzles of the original Tomb Raider game series.

It’s all too easy to play something which isn’t at all difficult, to relax into the same gaming routine, especially on mobile, when so many of us play during our commutes.

But puzzle games challenge us, make us think in ways we’re not used to, and in so doing, keep our brains sharp. They also offer a fantastic sense of achievement for those willing to power through. Whether you want puzzles and a story, like the Uncharted games, or just a little something you can dip into, we feel these series represent the best mobile puzzle games available on iPhone, iPad and Android devices. Let’s get quizzical.

Even though premium mobile games aren’t turning out as lucrative for Tiny Touch Tales as they used to be, we’re pleased to see the developer still willing to apply those excellent skills at making mobile games. Maze Machina, once again demonstrates Tiny Touch Tales’s mastery of its craft.

Suffice to say that this is an excellent take on the concept of the maze, and offers a lot of challenge, a respectable amount of levels, and is replayable without feeling like a grind. 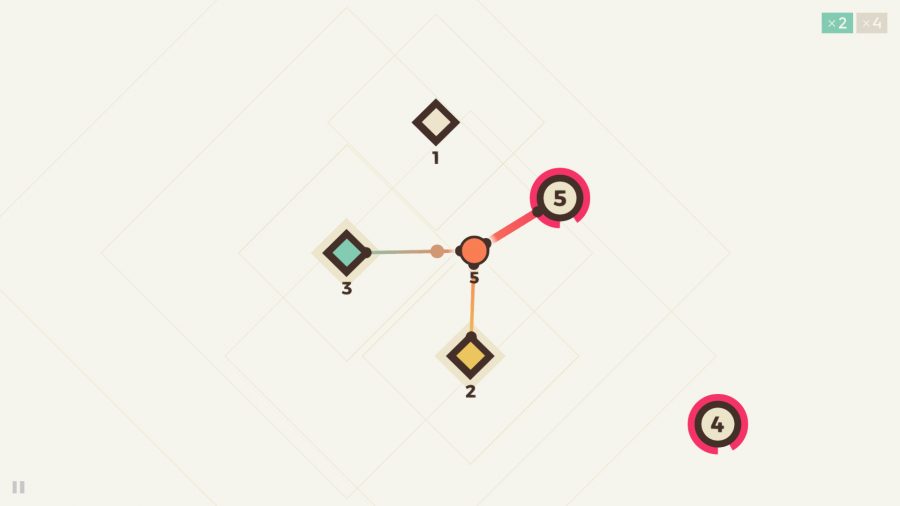 With a visual aesthetic that reminds us of the rather excellent Mini Metro, Powernode is a fun and challenging puzzler that has you connecting power generators to stop them from disappearing. Cables are permanent, and you have more nodes requiring attention than you have power crystals, so planning is key. New nodes spawn as you complete existing ones, however, throwing an ever complex range of spanners into your intricate power network.

It’s got a few niggles, but this is an excellent, thoughtful puzzle game, and perfect for anyone looking for a challenge that involves numbers and planning. 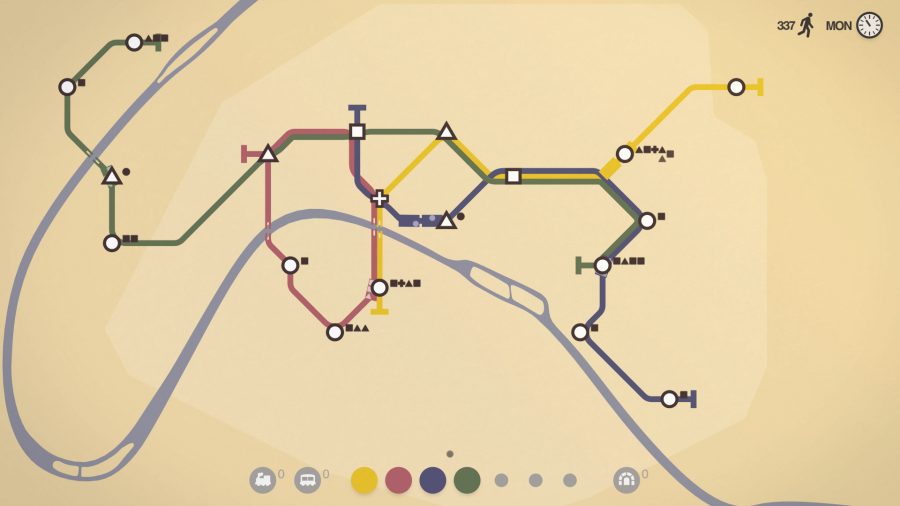 Logistics make the world go around. Mini Metro takes this theme and creates an amusing, minimalist puzzle about ordering and sequencing a city metro. This includes programming motion to meet specific goals, and making sure the right trains arrive at the right time. Some puzzle games rely unduly on shifts in perspective, or tricking you: but not Mini Metro.

The needs and requirements of the puzzles are always clear, the demands upfront. All the player has to supply is the way forward; that vital connection that will close the gap and make everything come together. 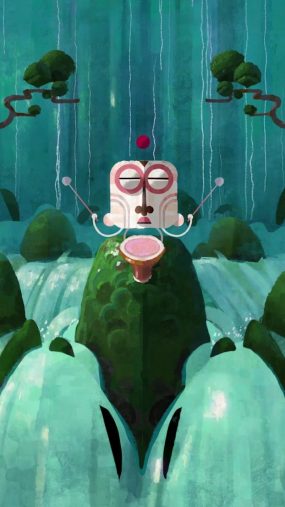 A cheap and cheerful puzzler that’s especially great on phones, ELOH is a kinetic game that’s colourful, challenging, and possesses some great attention to detail. The basic challenge is to position blocks to bounce balls into the correct holes. There’s a light rhythmic element to this, and as things get more complicated, the blocks take on more creative forms. Some will move along a specific axis, for example.

None of the puzzles should take longer than a few minutes to bounce your way through, but there’s over eighty of them, so you’re looking at a few good hours of gameplay for a minimal upfront investment. And no in-app purchases to boot! 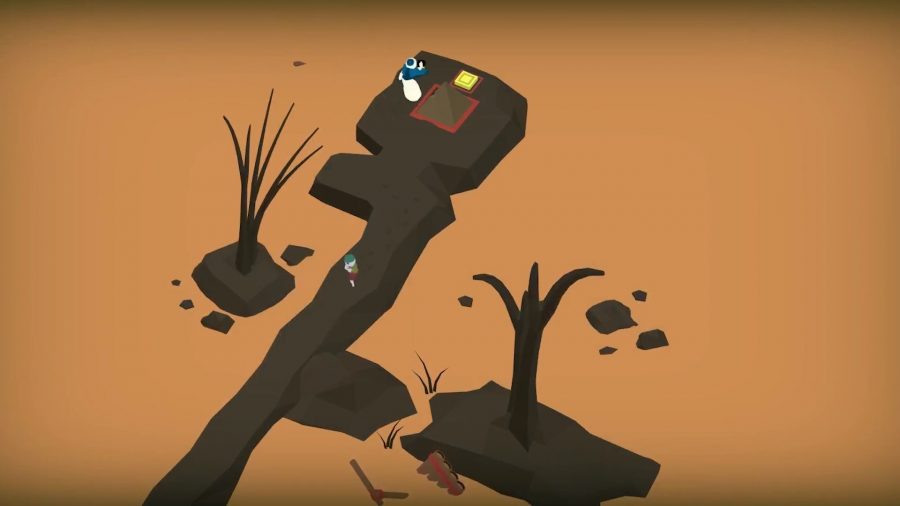 This is an excellent pick for fans of both Monument Valley and Square Enix’s Go games. It lacks the same variety and degree of cleverness that those other game’s possess, but there’s an ingenuity to its design that still does a great job at scratching that itch. The use of light and dark to change the scene in front of you is especially creative.

This is a maze-based puzzle game, with intuitive controls and a satisfying gameplay loop. Atmospheric and imaginative, Where Shadows Slumber is a worthy addition to our ‘best of’ roster. 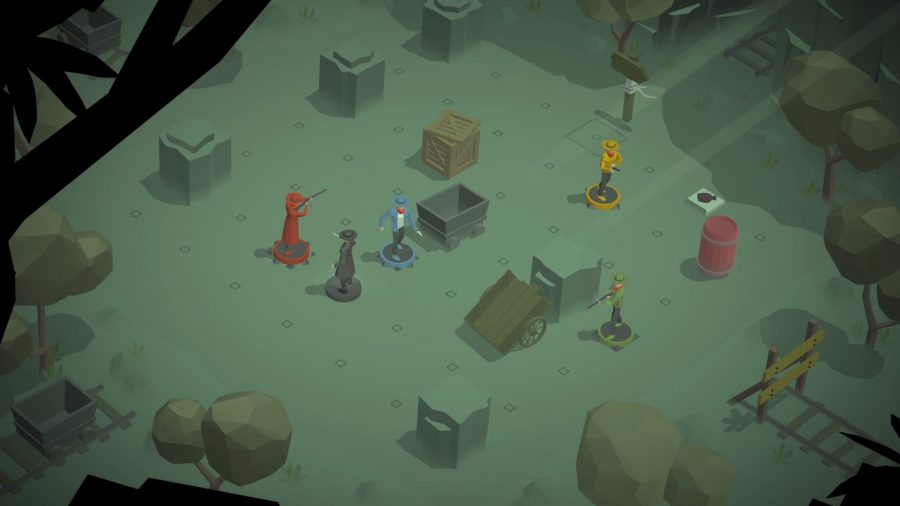 This puzzler resembles more of a board game than a match three. It’s difficult to find which had a bigger influence on it, the sombre motif of the Ed Porter/Sergio Leone western, or Square Enix Montreal’s critically acclaimed Go series. What’s easy to see is that developer APE-X has a clear reverence for both, and has done its best to highlight the strengths of both, while adapting the game to a unique vision.

Achievement hunting and score chasing in Infinite West can throw you in that fervent ‘just one more map’ loop. This is because the core concept is so solid, and the presence of in-app purchases is by no means a deal-breaker, as you get given a modest amount of freebies anyway. 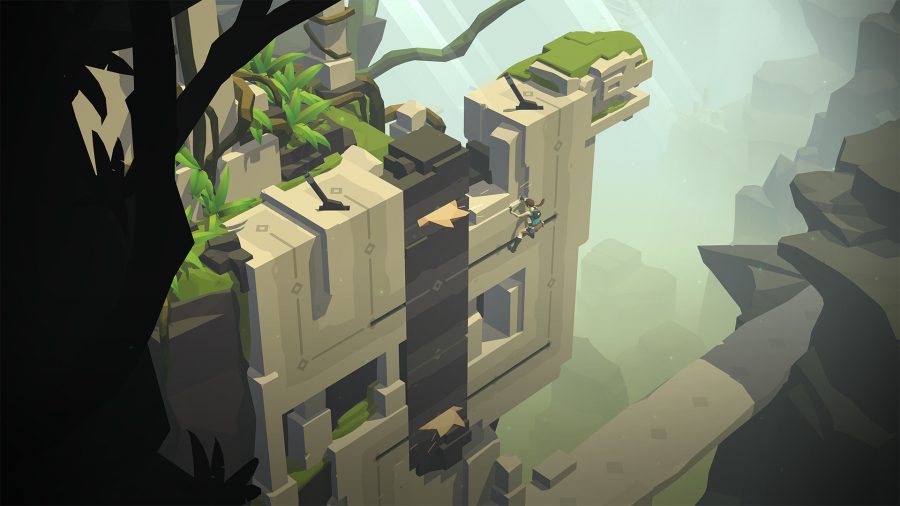 Many a sterling series has seen its reputation dinged by weaker entries. In particular, the sophomore slump; that challenge to recapture what made the original great without undue repetition. Every member of the Go series has its unique merits and mechanics, but Lara Croft Go stands as the series’ best.

Hitman Go was plagued by odd, turn-counter challenges, which offered only a derivative way of padding playtime without expanding content. Deus Ex Go’s grand plan for daily challenges and community-generated puzzles largely fell flat. But Lara Croft Go, along with its two expansions, hit the sweet spot of challenge, presentation, and pacing. Its focused treasure hunts will occupy even the best brains. 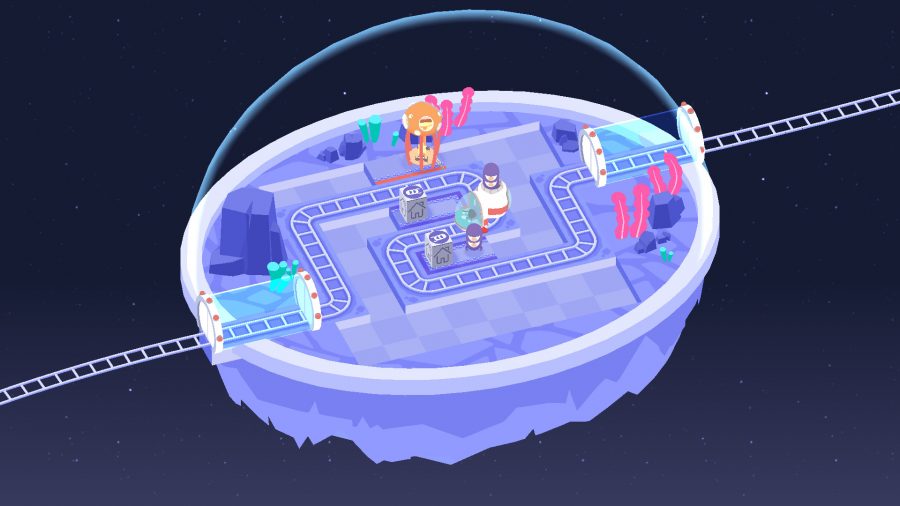 Cute little aliens squidge themselves into unlikely spherical compartments, as they commute to their destinations in outer space. In Cosmic Express, the puzzles are pickup-and-deliver, drawing train paths for a route that allows no cross-overs or doubling-back. The game includes a ton of levels and gets surprisingly difficult, sooner rather than later.

Every level feels crystal clear and nothing is superfluous. Cosmic Express winds its way through the galaxy and into your heart. 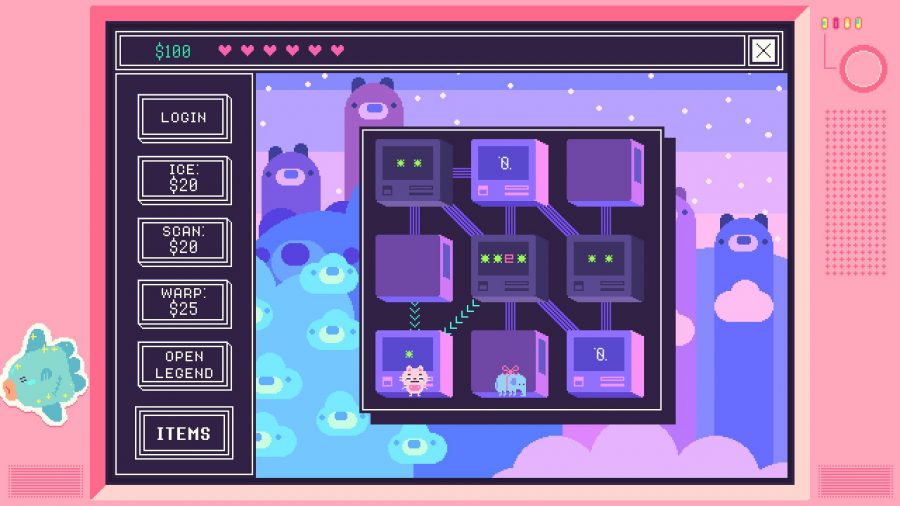 The Glitch Witch’s sudden disappearance from a computer OS finds the player character on a sudden quest to train and replace her. In Beglitched, you’ll open ‘files’ to find items, other avatars, programs, and enemies. The game is split between overland mode, which utilises a minesweeper-like method of guessing spaces, and the match three battle mode. The tone is light, idiosyncratic, and the level design is both inspired and gimmicky in a good way.

Constraints, properly applied, stimulate creativity. Beglitched was released without much fanfare, and then subsequently ported to mobile, where it shines even more because of its screen-within-a-screen aspect. 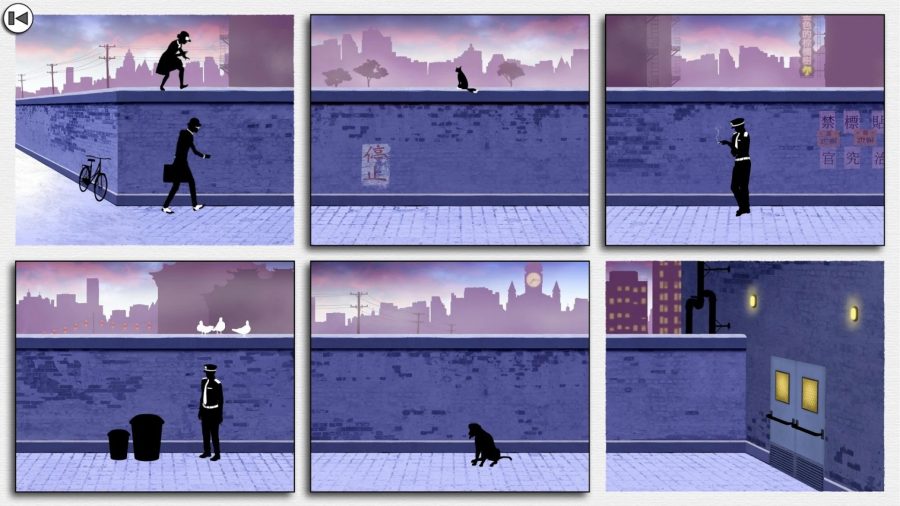 The search for the story, is the story in Framed 2. Cleverly partitioning and recombining what made the original so great, the follow-up refines, and refreshes the initial conceit. Comic book action meets stealth in a cheesy noir-ish setting. One could even say it… re-frames what made the original great. Yes, it is probably the shortest and most easily exhausted member of this list, but it still has a little extra panache that merits some special attention.

There are games to play for months or years, trying to crack their mysteries or refine skills. Then there are those games to consume in an afternoon, letting the whole experience become a unified and unbroken memory. Framed 2 belongs to the latter category; a class of brief puzzlers definitely worth playing. 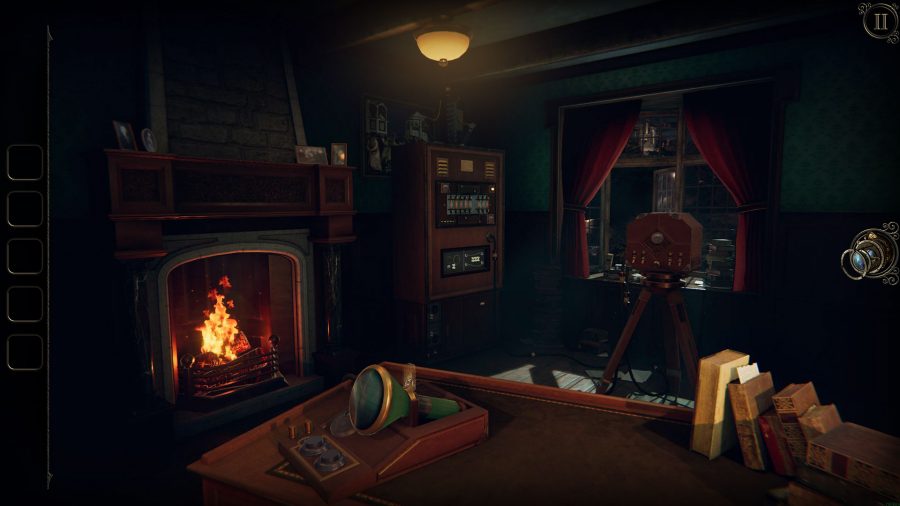 What can be said about the Room series that hasn’t been said before? Its excellent value and construction? Or the heaps of critical awards? Not to mention the host of mistaken-identity jokes based on the cult film of the same name.

Puzzle boxes are a unique tactile treat that shrink a world into a single object, and then make a player open it based on nothing more than sheer curiosity. The Room uses this experience to great effect, creating an experience which is both portable, and affordable, while also being just the touch mysterious. 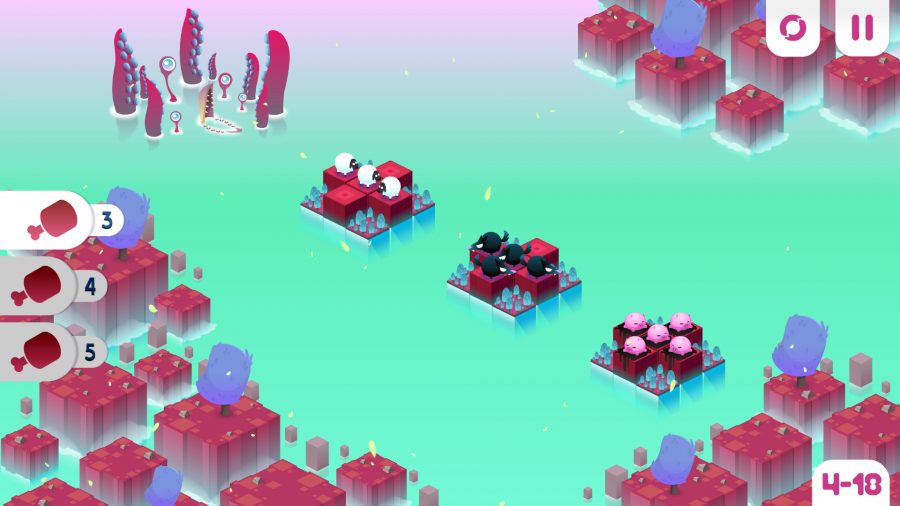 This gem was released way back in 2015, but it was only brought to our attention earlier this year. It’s a vibrant and friendly educational game where you use maths to solve puzzles. It’s a bit lighter than your usual fair, and some of the puzzles can be brute-forced, but it is an excellent example of hay-day app store design practices. If you’re looking for something different yet accessible to cater your puzzle needs, then you could do a lot worse than this. 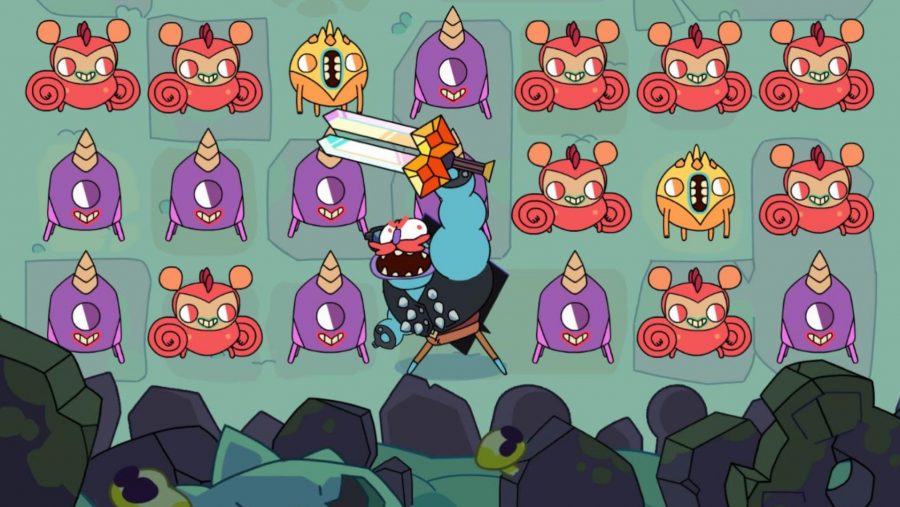 Combining a fun art style with an inventive approach to puzzling, it’s no wonder that Grindstone was so popular last year, and named by many in their best mobile game of the year lists. Grindstone is effectively a take on the matching genre, which might sound simple, but it’s all the inventive touches and smaller complications which makes the game special. With over 150 levels of puzzles to top it off, it’s well worth a look. 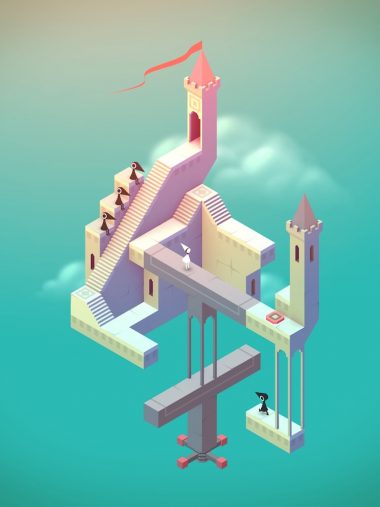 Perhaps one of the best puzzle games ever to grace the mobile platform, Monument Valley is simple, elegant, yet provides an expansive puzzling experience. The game’s most memorable mechanic, is treating every puzzle like an optical illusion, allowing you to manipulate the space in unexpected ways to find a route for the princess – your character – to cross. Each puzzle also represents a beautifully crafted little diorama, with architectural features, and multiple floors. 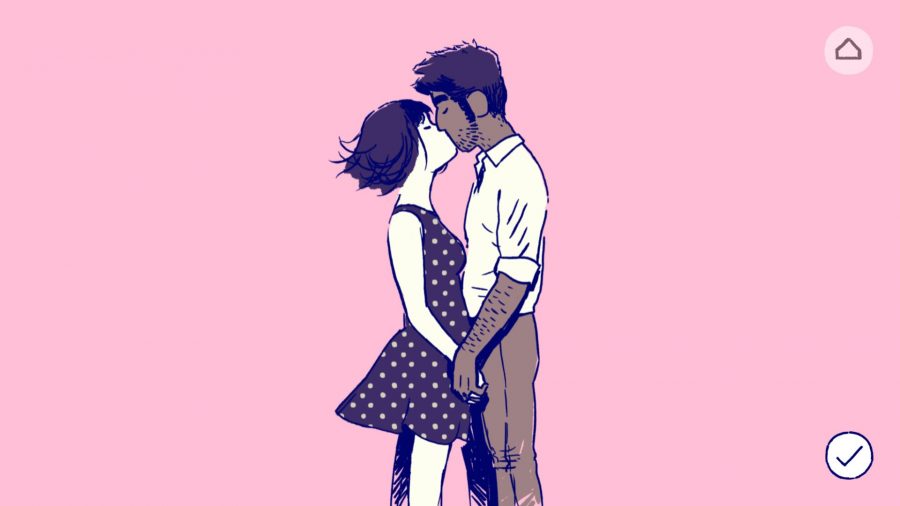 Though not as complex as some of these other beasts, the way you interact and progress the story in Florence is by completing little puzzles. These puzzles are used so well to represent aspects of being in a relationship, whether date conversation, or arguing at the grocery store. Florence may not be your typical puzzler, but if you want an emotional game which makes you feel connected to two characters – with minor puzzling undertones – it’s worth your time. 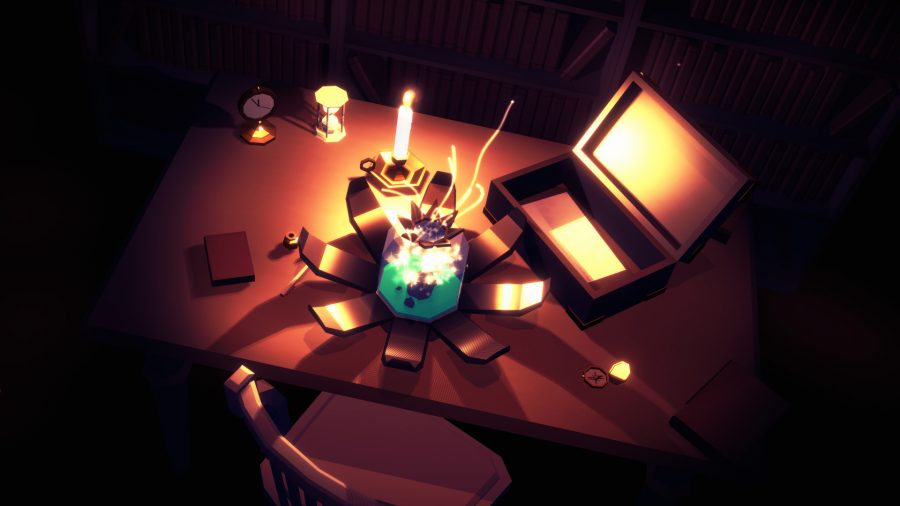 Do you like rhythm? Do you like gardening? Then you’ll probably love Evergarden. This tile-based rhythm gardening game takes place in a mysterious forest, where you grow your garden by combining plants into new, unexpected forms, returning life to the forest again. It’s an inventive, yet somewhat unconventional puzzler – worth a look if you’re into that. 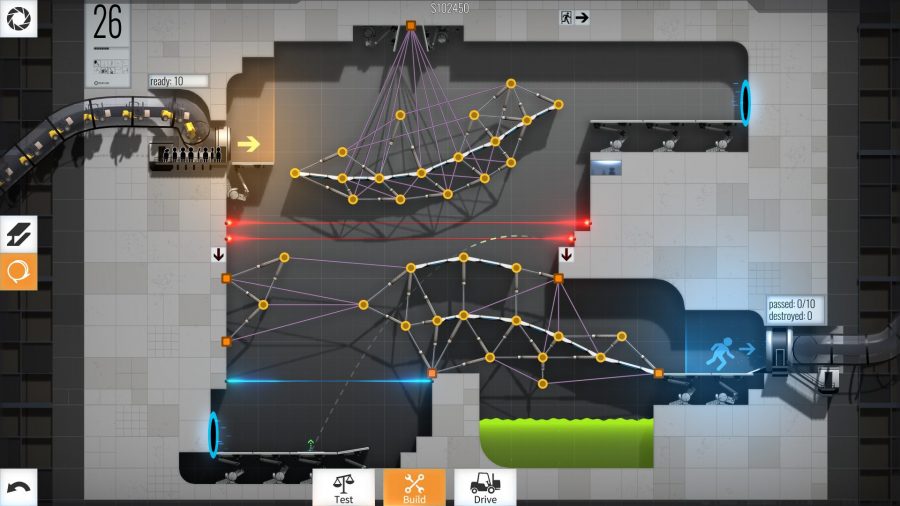 For us, Portal and Portal 2 are some of the best puzzle games ever made – the whole concept of creating a door in one place, and coming out in another has so much puzzling potential. That’s why we love Bridge Constructor Portal, a mobile spin-off, merging the Portal series, and the Bridge Constructor series. With GLaDOS accompanying, head into the Aperture Science Enrichment Center and complete a brand new series of puzzles. 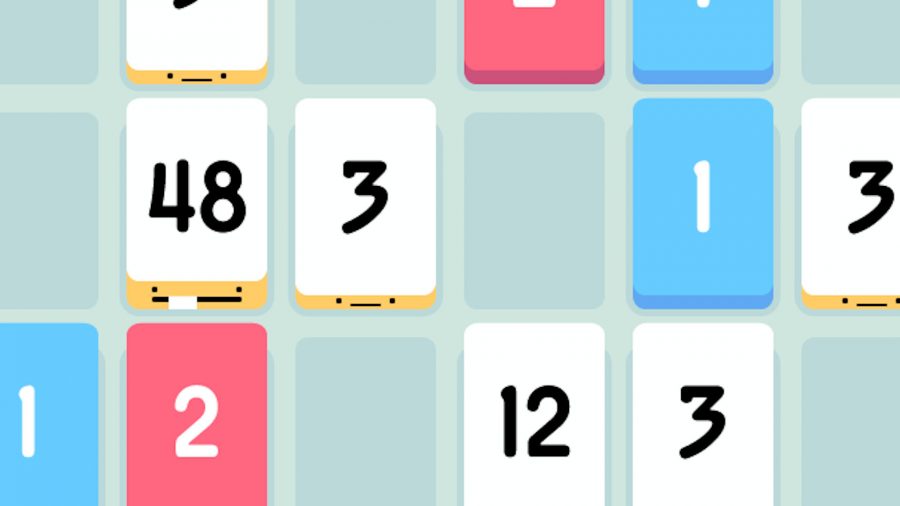 Though simple, ‘Threes!’ repeating number combination is horribly addictive, and as you combine, the game escalates in a really brilliant way. It’s hard to describe why Threes is so good, but it just has that elegant and addictive simplicity that some puzzle games hit on. We definitely recommend you see for yourself if you enjoy number puzzles.