Castlevania: Grimoire of Souls is finally available on Apple Arcade, and to say that I’ve been keen to play it is an understatement. Of course, there was a time when I thought playing the mobile title was impossible, with Konami choosing to shutter the game after a less than stellar reception during its soft-launch period in Canada.

Having finally tried the game myself, I can confirm that it doesn’t hit the heights that one would hope for from a Castlevania title. The entire franchise is beloved, with many fans worldwide, meaning anytime there’s a new title on the horizon, it gets plenty of attention. Though given its premature end after less than a year of release, it shouldn’t be too surprising that it doesn’t wow me.

I wouldn’t necessarily call Grimoire of Souls a bad game. It’s enjoyable to an extent – it’s just not a good Castlevania game. The gameplay is simple, making it very easy to pick up and play, it has a simple control scheme, and you can even play the game semi-automatically. You still control the movement of your character, but he can attack at will, though you can toggle this on and off at the press of a button that has a permanent place on the screen.

However, if we take a look at the narrative, this is where the game becomes weak. This is quite surprising given the idea of entering grimoires to cleanse them of supernatural monsters is actually quite appealing. But, unfortunately, it becomes rather repetitive and mundane, with the same creatures continuing to appear, none of which pose much of a threat. 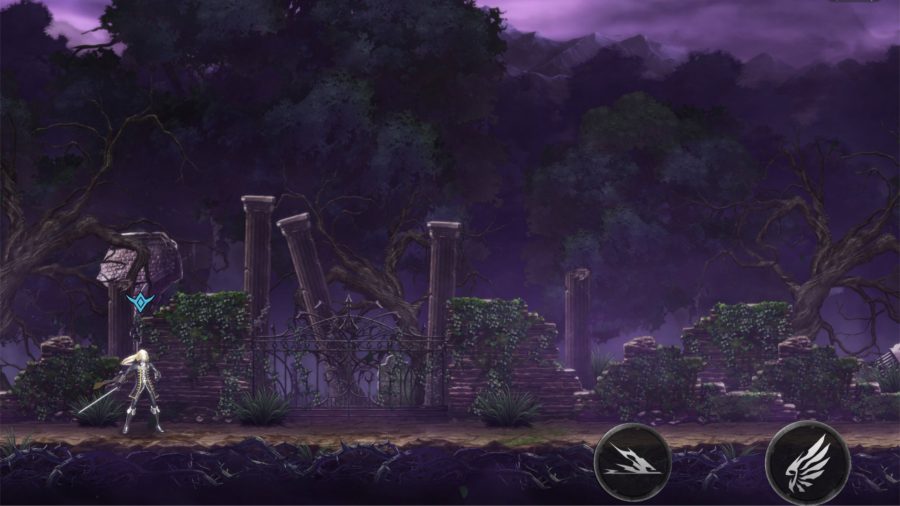 That leads nicely to one of my biggest gripes with this game, and that is that Castlevania: Grimoire of Souls is too easy – and trust me, never have I found any Castlevania game to be easy before. Usually, these Metroidvania titles provide quite the challenge. I suppose if you want a greater challenge, you can progress without upgrading your weapons or acquiring any skills, but those are what offer some semblance of entertainment when playing the game.

Speaking of skills, the game operates with a levelling up system. You know the drill, slay some monstrous beings, get some experience, level up, and ultimately unlock AP points to get yourself some new skills. Then there’s your weapon. As the game progresses, you unlock more choices and have the potential to upgrade your weaponry as you see fit.

Of course, no Castlevania game is complete without gothic environments shrouded in atmosphere. I’ll give credit to Grimoire of Souls in that it keeps to the gothic theme, though I doubt I’ll remember its settings for years to come, not like I remember the first time I ventured into Dracula’s castle way back in the days of Simon Belmont.

Overall, Castlevania: Grimoire of Souls is worth downloading if you’re an Apple Arcade subscriber – you’re paying for the service, so you might as well use it – as it does provide some mindless hack and slash entertainment. But, we do caution you, don’t get your hopes up that this is the mobile Castlevania game that you’ve been waiting for – because it’s not.

Grimoire of Souls is a mindless hack and slash title that promises so much, yet delivers so little. The franchise has certainly seen better moments.