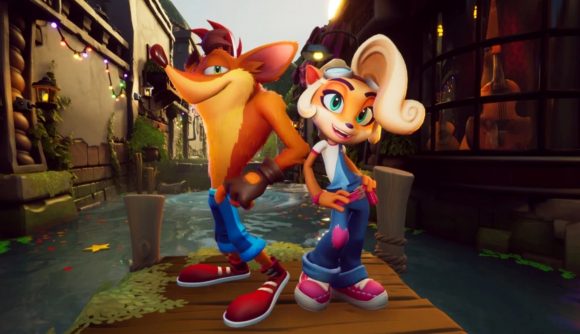 Crash Bandicoot 4: It’s About time is a fun platforming experience that makes you feel giddy and frustrated in equal amounts, but one of the best things about the game, besides the incredible gameplay, is all the different skins you can unlock – there’s nothing like running around as a prehistoric looking Tina Turner.

However, there are plenty of costumes that fell victim to the cutting room floor, one of which is the Crash 4 wasteland skin, but thanks to the amazing fanart by Redditor Kugawattan, we can get a glimpse at what could have been, though it does make us that little bit more sad that this concept never made it to fruition.

Seriously, these outfits make it look like Crash and Coco crash-landed into Mad Max. the art by Kugawattan gives off some nomad vibes, and if we’re honest, they make the Bandicoot siblings look badass. Yes, we love outfits such as mother clucker, but these costumes make more sense given you travel through some wastlandish areas in the game.

Where can I see the Crash 4 wasteland skin fanart?

You can check out the awesome artwork below or pay a visit to the thread on Reddit.

Found out about thise wasteland-themed scrapped skins for Crash and Coco in Crash 4, I thought it looked pretty cool so I decided to draw it. from crashbandicoot

If you’re after a new adventure with the wumpa-loving marsupial, spin your way over to our list of the best Crash Bandicoot games on Switch and mobile.