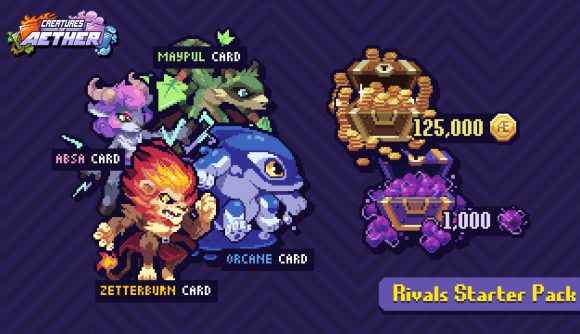 22 October, 2020: Our Creatures of Aether giveaway has now ended. Check your inbox to see whether you were a winner!

Since its release a couple of weeks back, we’ve been a little obsessed with the card-battler, Creatures of Aether. Developed as a sequel-of-sorts to the popular fighting game, Rivals of Aether, Creatures takes a slightly different direction, while still retaining the previous game’s elements and fun multiplayer focus. Creatures of Aether focuses around just that, collecting a selection of elemental monsters in the form of cards, which you then war against opponents.

The game itself is centered around card placement, as you try to capture as many enemy creatures as possible, matching your monsters to certain elemental squares to give them a power buff. Creatures of Aether also has multiplayer, and a fun card-crawling mode, where you fight from room to room in a dungeon to earn special loot.

Sounds great, huh? Well, that’s why we decided to partner with Creatures of Aether for this week’s giveaway of in-game starter packs. The codes work for both Android and iOS, and get you 125,000 gold, 1,000 abyss orbs, and four powerful ‘rivals’ that can lead your deck.

So if collecting creatures and battling them sounds like a good time, feel free to enter below! All you need to do is fill out the competition form, but please do have glance at our terms and conditions first.

You can find Creatures of Aether for free on Google Play and the App Store. You’ll also find Creatures on our list of the best mobile card games, alongside plenty of other great recommendations!