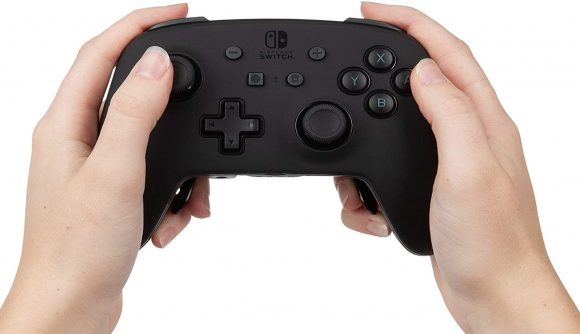 Whether your character has merrily launched themselves into boiling lava, or your precisely aimed arrow suddenly veered off and startled the legendary creature you were hunting, Switch drift can be incredibly frustrating.

The Nintendo Switch is a fantastic console for many reasons, but the notorious tendency of its controllers to begin acting independently of the users’ direction is a pain that many players will be familiar with, and so it may be time to consider an alternative. Enter the PowerA Fusion Pro wireless controller, which comes with four mappable paddles, wireless motion control, and a neat 30% off when you buy it on Amazon right now.

Created by controller pros, PowerA, and officially licensed by Nintendo, the Fusion Pro gives all the wireless freedom of Joy-Cons in a single ergonomic unit. The four additional paddles to the rear are designed to give you a greater range of in-game controls, and can be easily mapped at any point during gameplay for a controller that suits the way you play.

If customisation is important for you, then worry not: this controller comes with a whole heap of accessories which you can swap around to your heart’s delight, including two faceplates (white and black) and a choice of four thumbsticks. A 10ft USB-C cable gives great range of motion even while charging, and it’s even got a hard-shell storage case to keep the entire kit safe when it’s not in use.

It’s worth noting that there are a couple of limitations, however. If you’re a fan of the reactive rumble that you get during play with the Joy-Cons, then this potentially isn’t the controller for you as there’s no vibration functionality, and it doesn’t work with amiibo NFC. However, if you’re looking for a sleek design, great precision, and a price that won’t break the bank, the Fusion Pro has you covered.

Usually, you wouldn’t get much change from a hundred bucks for this pro controller, but at the moment, you can pick it up for just $69.99. It’s not clear how long the promotion will run, but if you’re quick, you could still save $30 and get it in time for Christmas.

Not quite what you’re looking for? Be sure to check out our guide to the best controllers for avoiding Switch drift.

A Nintendo veteran who's still pining for Diddy Kong Racing and GoldenEye 007. She fills the void by scouring the web for the greatest Switch and mobile gaming deals.