As a fan of Dark Souls, I’m a glutton for punishing experiences that require me to use trial and error to overcome the challenges I face. Duck Souls certainly ticks that box. It’s brutally hard, which is almost surprising given the cutesy visual style. You play as a duck, who over the course of this platforming adventure gets brutalised over and over again.

Admittedly, there are two difficulty options, casual and hard,, though I’d argue that casual is hard and hard is insanity. But, of course, the difficulty appeals to retro platforming fans. Completing classics like Ghosts’ n Goblins is a bit of a badge of honour, and it feels like Duck Souls aims for similar thrills.

The actual game itself is pretty simple, with your challenge to simply traverse a bunch of platforms and get to the end of the level. It sounds easy enough, and perhaps it would be, were it not for the obstacles – namely spikes – that end your run in a single hit. Duck Souls forces you to be creative. The most obvious course of action is usually the one that results in your death. Jump, dash, and climb your way to victory. It’s just the order of movement you need to work out.

When it comes to gameplay, bring your patience – death comes for you a lot. That’s fine when the controls work as intended, but this isn’t always the case. They just don’t feel particularly precise, with a simple hop between one ledge and another sometimes feeling like an impossible task. You tap the jump button, but just end up falling off the ledge through no fault of your own. It’s frustrating stuff. 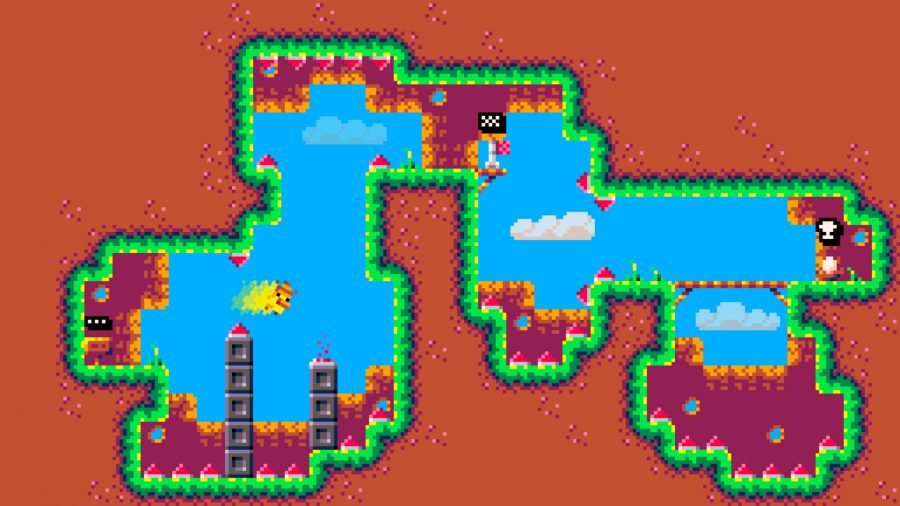 Duck Souls is pretty though, with its vibrant green, forest-based design inducing a wave of nostalgia thanks to its pixelated design. It’s reminiscent of the 8-bit and 16-bit days of the late 1980s and early 1990s, a joyful time for old school gamers. Fortunately, there’s a variety to the environments, with cave, castle, desert and snow-based locations available.

Oh, and much like the platformers of old, Duck Souls has a fun soundtrack, one that reminds you that you are having a good time, even if your death count says otherwise. It’s upbeat and somewhat motivational, forcing you to overcome the frustrating obstacles in your way.

Overall, Duck Souls is a fun and charming, albeit rage-inducing, experience. The way it tests you and forces progression through learning is great. Undoubtedly, its an enjoyable game for platforming fans. If you long for the good old days, where you feel a sense of accomplishment through beating the odds, Duck Souls could be the game for you.

Duck Souls is an infuriatingly fun experience that takes you back to the good old days of the action platformer, though it’s controls are somewhat frustrating

8
Dr. Scholl's Heavy Duty Support Pain Relief Orthotics, Designed for Men over 200lbs with Technology to Distribute Weight and Absorb Shock with Every Step (for Men's 8-14)