Whenever I see any mafia simulation game, I’m always going to compare it to the one that disappointed me the most. Omerta: City of Gangsters was a game that had great potential, but extremely sloppy execution. When even a game from 1998 (Gangsters: Organized Crime) is better, that’s worrisome indeed. Empire of Sin is, thankfully, much better overall, but the Switch version has unique problems.

Tasked with taking over the streets of Chicago, you can choose one of 14 different mob bosses (in the base game) that each have their own bonuses and combat skills. These range from real-life racketeers like Dion O’Banion and Stephanie St. Clair, to fictional gang leaders like Maggie Dyer or Daniel Mckee Jackson.

All of them also have their own unique missions that expand their backstories: Sai Wing Mock for example is looking to take down the people who shot up his brother’s store, while Al Capone is seeking an old friend from New York. It adds a nice bit of flavour to the game, but is only present if you select the “New Game” option rather than “Quick Start”.

After picking one of the 14 Empire of Sin bosses, you’ll then need to build up your criminal empire by buying up – or forcefully taking – property, while also upgrading your rackets to make money, and dealing with any rivals stepping on your turf. As a management game, there’s a lot you can do: from organising sit-downs, to negotiating deals with rivals, to opening/closing your rackets when the cops become too suspicious of your activities. Everything is laid out nicely and the game explains the interface really well during the course of the tutorial. 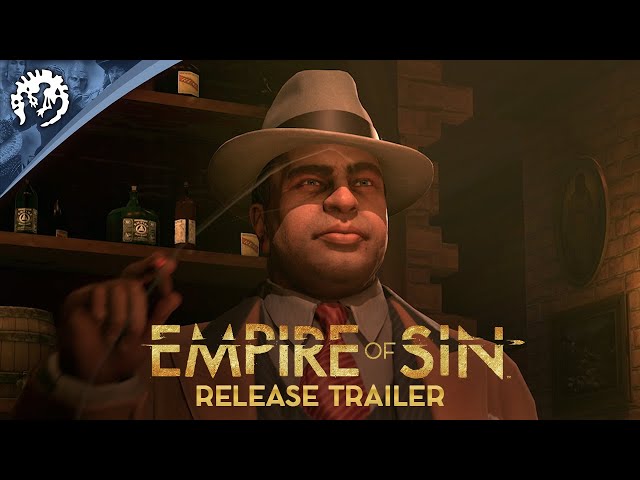 You could play the game by entering or exiting buildings, all while looking at the detailed streets of Chicago, but Empire of Sin’s real-time simulation mode can be played entirely from the map view, which is crisp and clear. It makes planning your next move much easier and is honestly my preferred way of playing the management sections. My only gripe here is that the game has to load every time you enter a building, including friendly ones such as a safehouse, but it doesn’t do such a thing when exiting a building in the map view. It’s a minor thing, but it did cause the game to automatically load the area which takes a long time on the Switch.

The real-time strategy part of Empire of Sin is probably where I had the most fun, in part because it isn’t too complicated. When things do get a tiny bit more involved, the tutorial explained everything I needed to know, especially when assigning a lieutenant to manage a separate neighbourhood. It’s here you can check out crew members that you can hire and how they interact with each other. Some people absolutely detest each other, while others are friends and lovers. I would have liked for the game to show if a mobster has been hired to a rival faction though, as I did run into a few battles where a member of my crew refused to fight because their lover was on the other side. 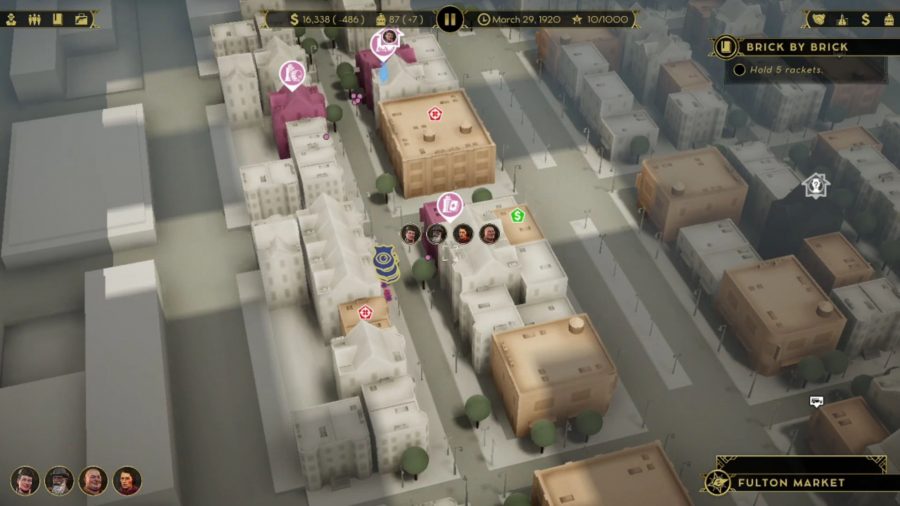 When taking over buildings, defending your own rackets, or even ambushing foes on the street, the game switches to a turn-based strategy mode. If you’ve played the recent XCOM games, then you should be no stranger to how the fighting goes: there’s even an overwatch command and characters will permanently die. Where Empire of Sin gets a bit more complicated is how previous actions result in either the boss or crew gaining a positive or negative trait.

What Empire of Sin captures really well is the setting and sounds of the prohibition era.

For example, if one of your crew gets a whole bunch of kills throughout their criminal career, they will eventually get the Hair Trigger trait, which makes them attack everyone in sight when an ally goes below 25% health. In contrast, your characters can become alcoholic, or even contract an STD from hanging around in brothels for too long.

In general, I don’t enjoy these as much, and it’s largely down to repetition in the late game. At the beginning of the game, the first few battles can be thrilling as you get used to how combat works, but the novelty of it all wears off. The only real challenge came as I was trying to take out a boss, since they have loads of bodyguards to deal with. It can take anywhere over seven hours to finish even a smaller game of Empire of Sin on the lowest difficulty level, which is good, but a lot of it is padded out with battles. Missions do vary things up a fair bit, with boss-specific missions being a highlight. 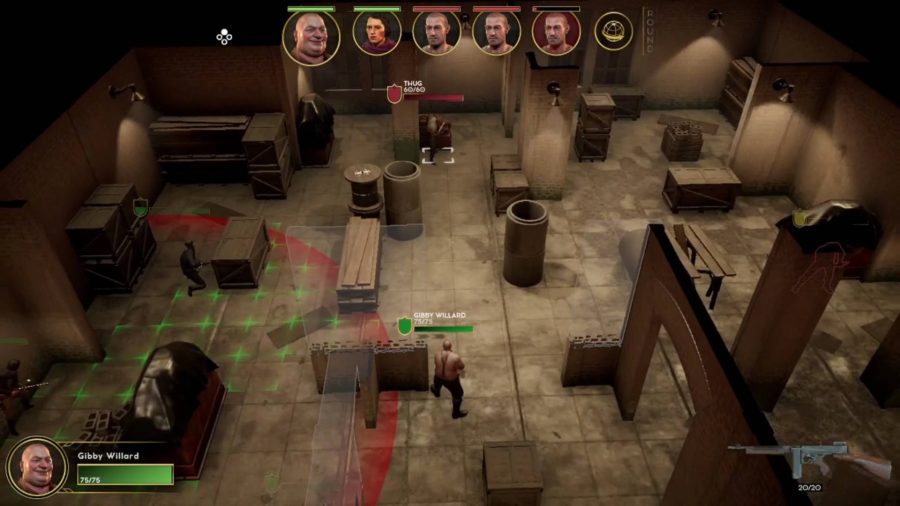 What Empire of Sin captures really well is the setting and sounds of the prohibition era. Chicago’s speakeasies are dimly lit bustling areas that can be upgraded to have a live jazz band playing on stage, while back alleys are appropriately grim. The music is pleasing to listen to, and I did find myself snapping my fingers to the beat, though it does become a little repetitive as time wears on. Voice acting is also a mixed bag, with some ham-fisted impressions of typical gangster speak and the occasional wandering accent being a bit more distracting than authentic.

I just can’t recommend investing in the Switch version, or at least not doing so until it’s been extensively patched.

I’ve purposefully put off talking about how the game looks on the Switch. There’s a good reason for that, and before I go further I should provide a bit of a disclaimer. I played the bulk of Empire of Sin on PC. This was because of the fact that Pocket Tactics was able to gain access to a PC build of the game over the course of the weekend prior to receiving the Switch version. In terms of content found within, both the Switch and PC version are identical as far as I could tell.

I must stress that Romero Games is planning to release a patch on December 15 to address some of the issues I found in the Day One patch version of the game on Switch, I also knew going in that the Switch version of Empire of Sin was never going to match the PC version one-to-one, with no delusion of expecting otherwise. What I wasn’t expecting was just how differently it runs. 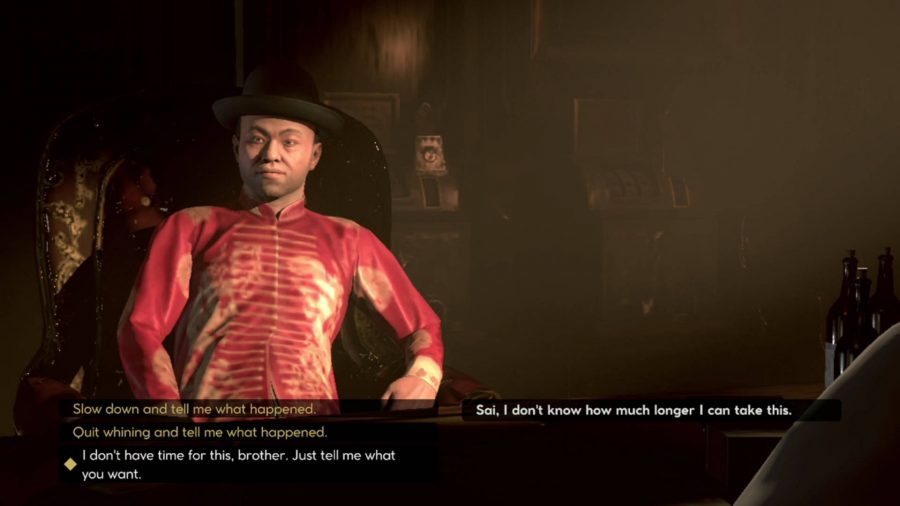 The difference is immediate when selecting a mob boss. On the PC version that runs at a full 60fps, there were intricate details on the coats and costumes, but in the sub-30fps Switch version, the details and buttons were painted out, smeared like a child’s finger painting in some cases like on Angelo Genna’s coat. I pick Sai Wing Mock as my beginner character, as his combat skill is one of my favourites of all the bosses.

Soon I was greeted by the sheer spectacle of a glowing chair. It was subtle, but as the characters talked, the background was far more distracting than I could have imagined: with the actors upstaged by a dazzling piece of furniture. The main game itself looks a little better, but there’s an odd haze and a lot of the textures are washed out, jagged edges on every object outside of the UI. For what it’s worth, the UI is very clean in comparison. The haze wasn’t just found outdoors, but also inside of speakeasies, breweries, and safehouses, poorly disguising just how low-res everything looks.

Related: Check out our Empire of Sin guide.

The frame rate struggled to reach 30fps while in docked mode, especially whenever someone fired a gun or released explosives. It did have a slightly better time in handheld mode, but that’s the virtue of the game running at a lower resolution.

As a mafia-simulation game, Empire of Sin is one of the best I’ve played. On the whole, it nails the feel of being a criminal mastermind, managing illegal rackets and ordering your crew to whack rivals who step out of line. That said, I just can’t recommend investing in the Switch version, or at least not doing so until it’s been extensively patched. It’s currently not optimised well and the issues range far beyond what we were informed about. If you absolutely want a mafia management game on-the-go, then I’d give it a few months before buying.

Empire of Sin is a great mafia management simulator with some fantastic ideas, but sadly the Switch version specifically is currently too graphically compromised.