Look what the cat dragged in! You may already know this, but there’s only room for one top dog in Empire of Sin. Naturally, you’ll want that to be you and we don’t blame ya. In order to win at the game, you must grow your criminal empire to outlast the competition through any means necessary. You can forge alliances with other criminal bosses to take down rival crooks, but, ultimately, you’ll have to stab your allies in the back. Complete domination is the only way to take over Chicago.

Whether you decide to pick New Game and get all the specific story missions that each one of the Empire of Sin bosses gives you, or Quick Start to ignore them entirely and just focus on building your criminal empire, there’s a fair bit to take in. If we have any one tip for you that trumps every other tip that anyone can give you, it’s to spend some time with the tutorial and take it all in.

Empire of Sin explains itself surprisingly well for a strategy game, and the tutorial will get you up to speed with managing your assets. However, there are some little nuances that you may overlook as time goes on. So that’s our business with this Empire of Sin tips guide: giving you information to make your start as a top mob boss. Payment? Nah, we’ll just be calling in favours later.

Your first decision is probably the most important one of them all: which boss to pick as your player character. There are plenty of avenues you can take with each one, since they specialise in specific areas. Thankfully the game points them all out to you before selecting your boss. 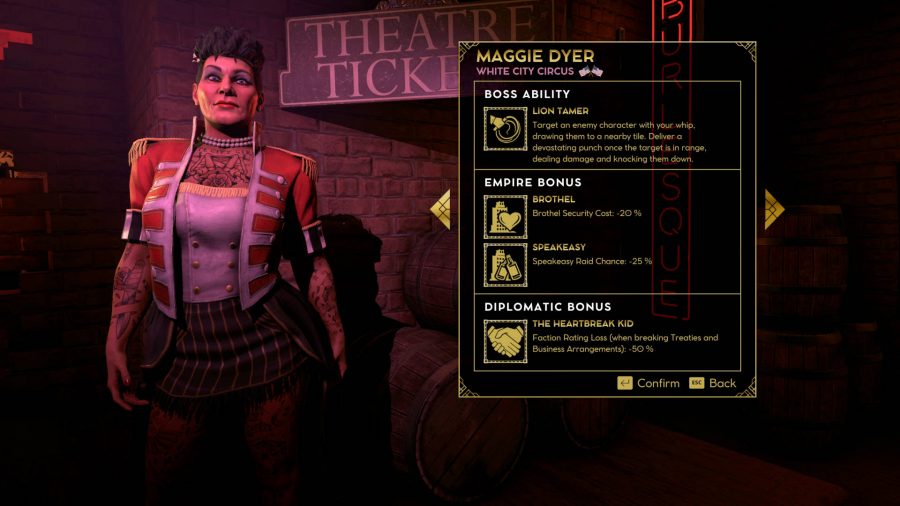 Let’s take Al Capone as an example. His combat ability – Rain of Fire, is a bit of a double-edged sword. Anyone that moves into the cone that appears after it’s used will take damage, including allies. But his Empire bonuses are much more effective, as better quality beer means more cash coming into the organisation, and lowering risks of infections from brothels for all his gangsters is a massive plus. He also gets better diplomatic ties when using a Defensive Pact, so it’s worth joining up with rivals.

On the other hand, Mabel Ryley of the Alley Cats has a ridiculously powerful combat skill where she can mark multiple targets at once, fire a shot that ricochets between all three, and inflicts the “Deep Wounds” effect on any hit target, which causes them to bleed out. However, her empire’s bonuses revolve around casinos, which are one of the riskier ways to make money. She is slightly more likely to have trades accepted than other bosses, but it’s worth weighing out the pros and cons in advance. 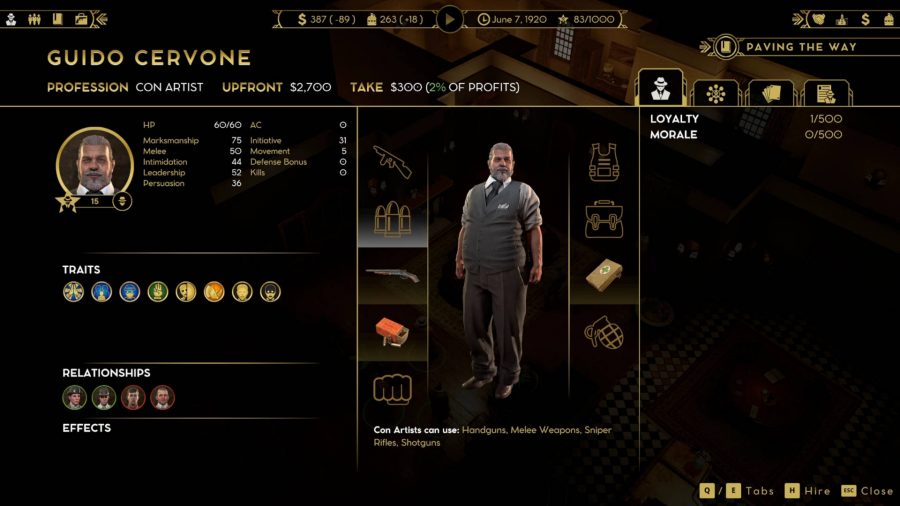 In addition to the boss and any regular mobsters, you also have the ability to hire new goons for your organisation. These are player controlled characters, each with their own class and perk list. They each have their own talent tree based on their professions: Doctors, Hired Guns, Enforcers, Con Artists, and Demolitionists.

What you do need to do is be mindful of who you hire in the first place. The first two goons that you can hire are Maria Rodríguez and Hugh “Tank” Miller and while they don’t have conflicting personalities, there will come a time when you may decide to hire Maria’s lover Bruno. Hugh and Bruno consider each other enemies, so trying to get the two of them to work together is going to be tricky.

Hiring multiple gangsters to fulfil different roles can also be beneficial. You may find that when fighting a boss directly, a member of the group will withdraw from battle because their squeeze is fighting for the other side. Saving regularly and adapting to situations like this is the key to getting the job done.

More like this: These are the best Switch strategy games

Recognising talent by promoting your underlings to the position of advisor or underboss can also bring stability to your criminal organisation. By using your notoriety, obtained by performing nefarious deeds across Chicago, you can promote your best hires to prestigious positions. When you’re expanding beyond the opening neighbourhood, you can promote someone to a lieutenant to look after your business.

It’s not just who you hire and what their abilities are that’s important. You also need to be mindful of what you ask each of your mobsters to do. If they get enough kills with a certain weapon equipped, they’ll get a perk related to that weapon. If they see lots of combat, they may pick up the Hair Trigger perk that activates whenever an ally’s health goes under 25%. There are negative traits too, like becoming alcoholic or contracting STDs from brothels, so be mindful of where you place your crew. Death is also permanent, so try not to order your crew too recklessly.

Finally, make sure your crew’s inventory is upgraded to the best stuff by selling the old guns and armour in the Black Market, and buying new stuff where possible. Certain guns are rarer than others, but damage prevented is the biggest determining factor of how good a weapon is. The same goes for the defensive capabilities of armour. 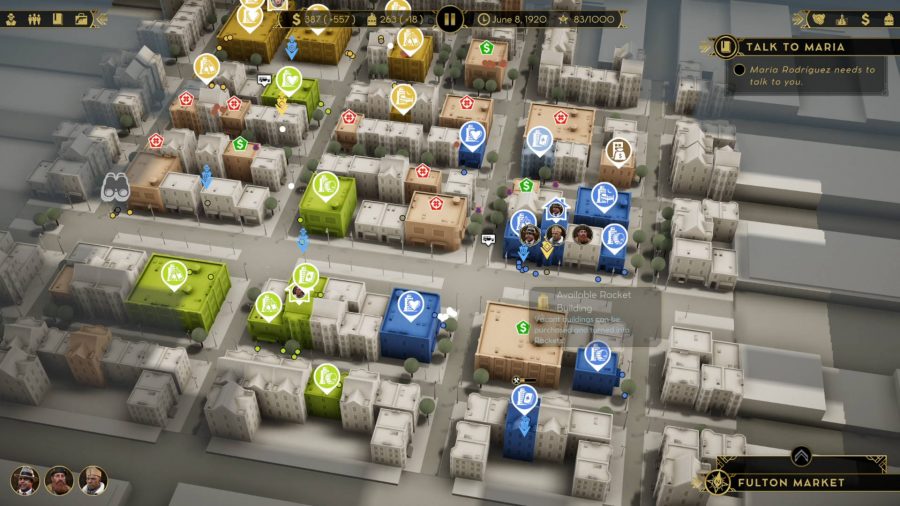 Fighting is normally a last resort, or perhaps the opening salvo if you’re feeling particularly cruel. But the meat and potatoes of Empire of Sin comes with the day-to-day running of your businesses.

Firstly, and we can’t stress this enough, pause time as much as you can when planning. This will give you an opportunity to collect yourself after a hard battle and refocus your priorities towards your business assets. You can do a surprising amount of things while the game’s time is paused: upgrade rackets, give your gangsters orders, and open/shut your buildings whenever the cops get too close to raiding them.

When taking over or buying buildings, keep in mind what you already have in the neighbourhood and make more based on the synergy bonuses. It’s also well worth considering investing in a hotel to drum up business, as they can increase your synergy bonus by up to 200%. The synergies are as follows: 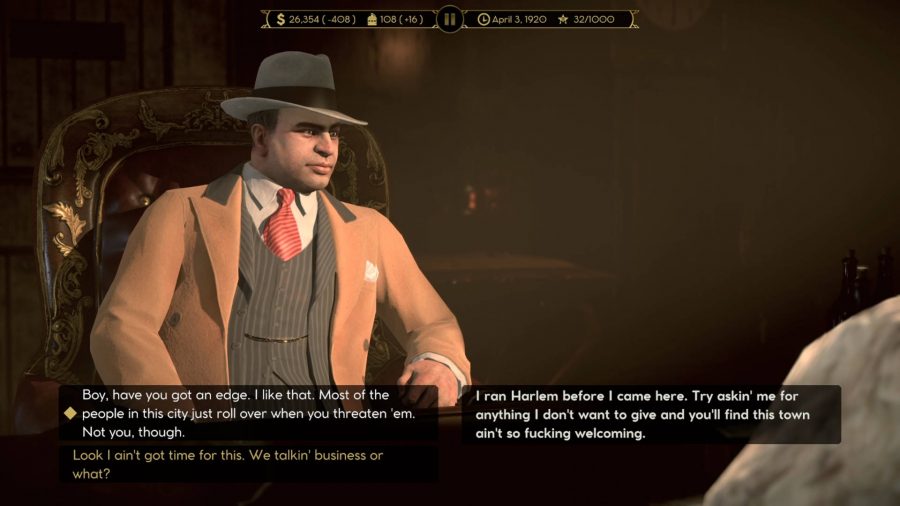 Diplomacy can be worth it

Occasionally, you’ll find yourself in hot water with one of the other mob bosses. The important thing here is not to flap about, but instead take control of the situation. You are the top dog, not them, so act like it!

The general rule of thumb here is to take mob bosses up on non-aggression acts, and business deals, but not to cave in when they demand retribution for territory lost (unless you were particularly bolshy with your expansion plans). You may also be asked to protect an ally from a rival that you should only do if you have the capacity to react quickly, or join an ally in declaring war on a rival mob boss.

More like this: Check out the best Switch RPGs

In fact, the only absolute no-no is breaking promises or attacking rivals that have allied themselves with everyone else. You’ll soon have every gangster in Chicago knocking on the doors of your breweries, speakeasies, casinos, and brothels. Heck, your safehouses might also be compromised and that’s the worst thing that could happen.

Those are all of our Empire of Sin tips so far, but as more and more mob bosses try to weasel into the shady underworld of prohibition Chicago, more tips may come to light. We deal in information here at Pocket Tactics, so we’ll be keeping our informants on the payroll as they scope out for that extra intel. You can also check out our Empire of Sin Switch review for our thoughts on the port.